When it comes to facelift’s, most manufacturers do minimal changes and boast about their products as if they are brand new. But that’s not the case with new Go and Go+. Datsun has launched the new Go and G0+ models across India with a complete makeover. To be precise, the Go and Go + comes with 28 new features and 100+ unique updates. Back in 2014, the launch of the Go was supposed to shake down the segment, but for various reasons, it couldn’t grab much love in our mass market. Now, Datsun as a brand, is getting a new face and has promised to double their network within 3 years; we can expect a shake down.

From a-budget-oriented perspective, both cars have a come a long way in this new avatar. They come with revised styling inside and out as you can see in the pictures. Both models get a new front bumper with an eye-catching new grille mesh surrounded by chrome (Dynamic Yukan Grille as they call in Datsun’s language). The revised front bumper is sure a winner and it also comes with new LED DRLs which is a unique feature in the top variant like the newly designed diamond cut alloys. The headlamps offer an innovative ‘follow-me home’ function as well. The wheels are now larger at 14 inches giving it a better stance. At the rear, the cars get a modified bumper, newly added wiper and a chrome strip at the end of the boot lid. Available in 5 grades, the new Datsun GO and GO+ have been launched in two new additional colours “Amber Orange” and “Sun Stone Brown” respectively. 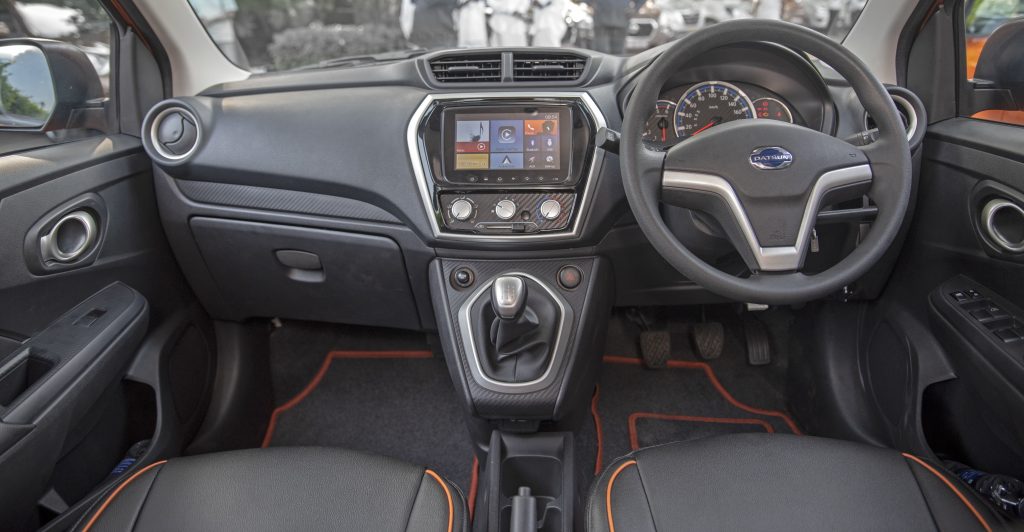 Step inside and you will be greeted with a new dashboard and more comfortable individual seats. In between seats, you get a conventional handbrake rather than the old school pull-type lever near the steering with connected seats. The Go+ gets dual tone dashboard and the Go gets a full blacked out theme and thankfully there is a significant change in the quality of materials used. 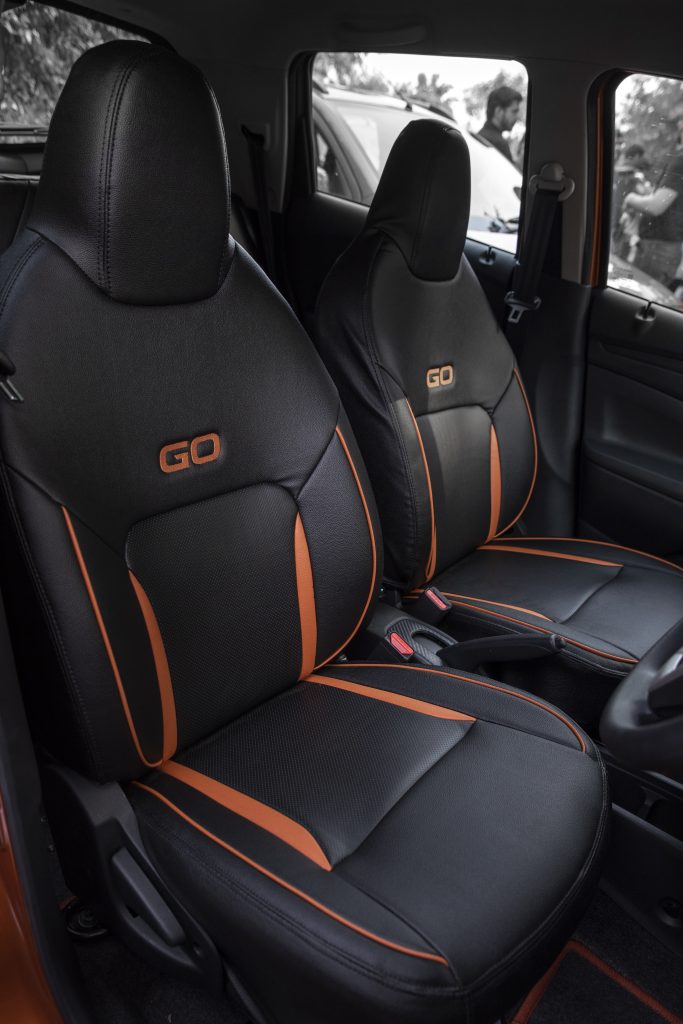 Driver side controls allow you to operate all four power windows and the electronically adjustable ORVMs are a new addition. The major update is the newly added Blaupunkt 7-inch touchscreen in the centre console with Android Auto and Apple Car Play which is again a top-spec special. Sound quality is just adequate and the USB/Aux ports are positioned under the gear lever.

Even though the individual seats are comfortable, it bothers during a long run and the rear seat comfort is average with limited knee room. The Go gets 265 litres of boot space to carry your bags and the Go+ only offers space for small bags since it has an additional row at the rear. Though, it is expandable up to 346 litres by folding the third row. 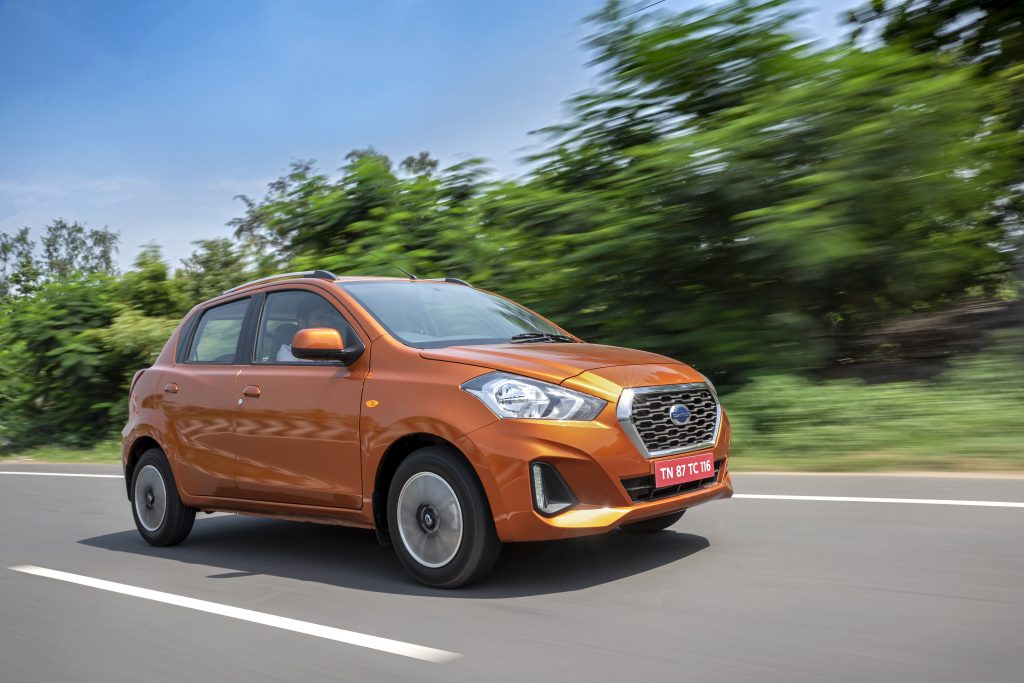 Both cars get the same 1.2 litre three cylinder petrol motor with peak power output of 68hp and 104Nm as before. The Go and Go+ with its lightweight bodies, always feel peppy to drive. Once the tachometer crosses the 2000rpm mark, you get enough power on tap and ready for the urban jungle. The engine is mated to a 5-speed gearbox which drives the front wheels.

Once you cross 80kmph, a speed alarm comes as notification. Above triple digit speeds, there are little vibrations and the car isn’t sure footed to the road because of its light weight body. Braking seems to be a major improvement since Go comes with ABS with EBD now. The Go hits a ton from standstill in a claimed 13.3 seconds and claims a mileage of 19.83 kmpl. Safety features like ABS with EBD and Brake Assist, Reverse Parking Sensor and dual airbags comes as standard now which is big news and few features are also first-in-segment. Datsun is sure that the car is now equipped to clear the crash test norms of 2019.

The Go and Go+ offers the best-in-class ground clearance of 180mm which means patchy roads can be tackled without much fuss. The ride control suspension system is new and offers a smooth ride. Another best-in-class features are the 4.6m turning circle radius and the wheelbase of 2450mm. 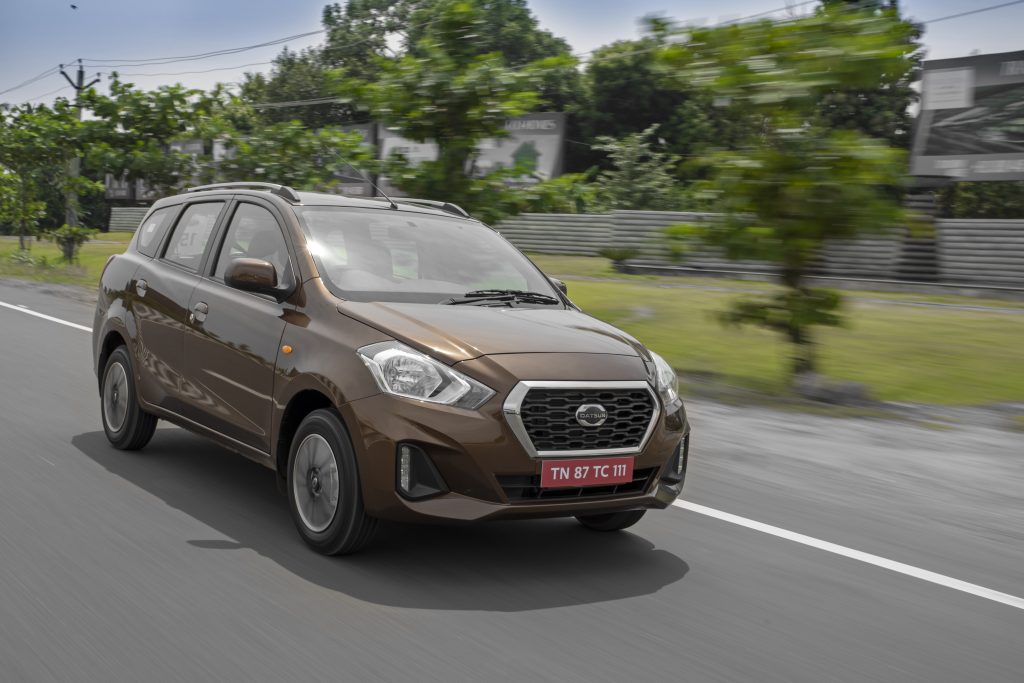 Will you buy one?

With a new makeover, the Go siblings are hard to hate. They aim at young and vibrant customers who search for something new. Go+ is the only option in the market when it comes to the cheapest 5+2 seater and Go is sportier than any other competition in the segment. But still there is scope of improvement even after Datsun has offered us so many new things. The gear shifts must have been smoother and there should be a decrease in the body roll. Even though both cars boast anti-locking braking system, it doesn’t bite as and when required. The door handles could have been made modern instead of the old model. 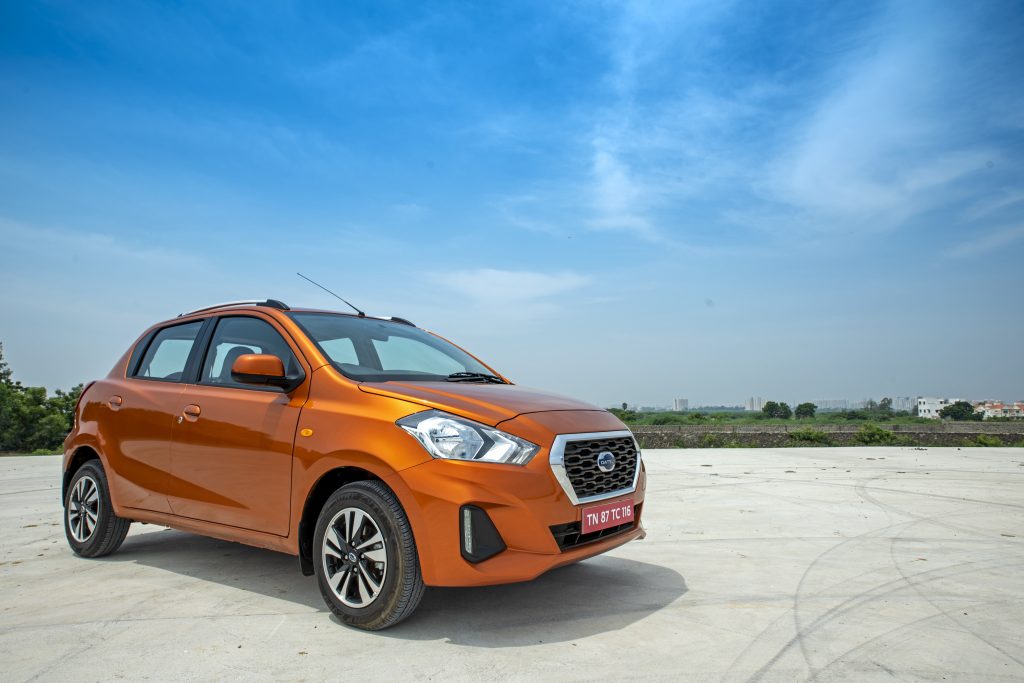 For a hassle free experience, Datsun is offering Datsun Care, a 2 year warranty with all-inclusive car service package for the Go and Go+ models. With these facelifts, Datsun is confident about giving a tough competition in the market. Even though the old world charm Hyundai Santro is getting launched soon, the Datsun Go will be there to give Hyundai a tough competition. Not just with cars but from now onwards, Aamir Khan will be the brand ambassador of the Datsun! With this it is clear that Datsun has well planned strategies and is committed to India! Currently having operations in 240 cities with 270+ touch points, the Datsun network is growing and they should be able to keep up with the competition in order to win this mass segment.