My feet kept stretched away from the seats comfortably, hands up with my spine kept erect and I receded a bit to reach my pillion to make my voice audible to him. “Are you comfortable?” While he was enjoying the ride on the extremely comfortable cushioned seats and the relaxed seating position.

As far as we know, cruiser motorcycles were synonymous to just one brand. But that has become a history now considering the wide variety of cruiser motorcycles available in the market. Such a historic brand is Indian. No I am not talking about our country!

Whenever we see a cruiser motorcycle in a Hollywood movie, we have always had fantasies about owning and riding one in American style! Ladies and Gentleman, we’ve ridden the Indian Scout which has years of legacy and one of the favourite entry level cruisers in the world of biking.

Indian is an American brand which originally produced motorcycles from 1901 to 1953. The company was acquired by Polaris Industries in 2011 and introduced in India.

With heritage dating back to 1920, the Scout was reintroduced in 2015 with an all new flair staying true to its glory and legacy. The Scout is a mid-size cruiser as the brand likes to call it – and was the lightest motorcycle in Indian line-up until the Scout Sixty came into the picture.

The Scout has all the must haves of a cruiser. The Scout and the Scout Sixty have cut-down fenders — unlike the rest of the Indian lineup with valenced fenders — and lacks the iconic fender-mounted war bonnet. Still, they’re Indian in all the right places. The fat 130-series front tire gives the Scout a great dose of American-cruiser styling. The low seat height of 25.3 inches will give good confidence for the short ones but for taller boys like me, it feels a bit cramped with your feet forward as you can see in the picture, I look a bit too big for the bike.

To keep up with the classic look, the speedometer has a decidedly vintage dial and instrumentation is basic. There is no fuel gauge; instead you get a warning light when the fuel is low. This isn’t a commuter bike and we ride bikes to have fun with no particular place to go or be. The solo seat says you don’t want company, so don’t even ask. If you ask, peruse the accessories catalogue and add passenger footpegs, a pillion and cushioned passenger sissy bar in that same gorgeous Desert Tan leather. Complete the look with matching leather-bound hard saddlebags and you and a friend are ready to hit the town. 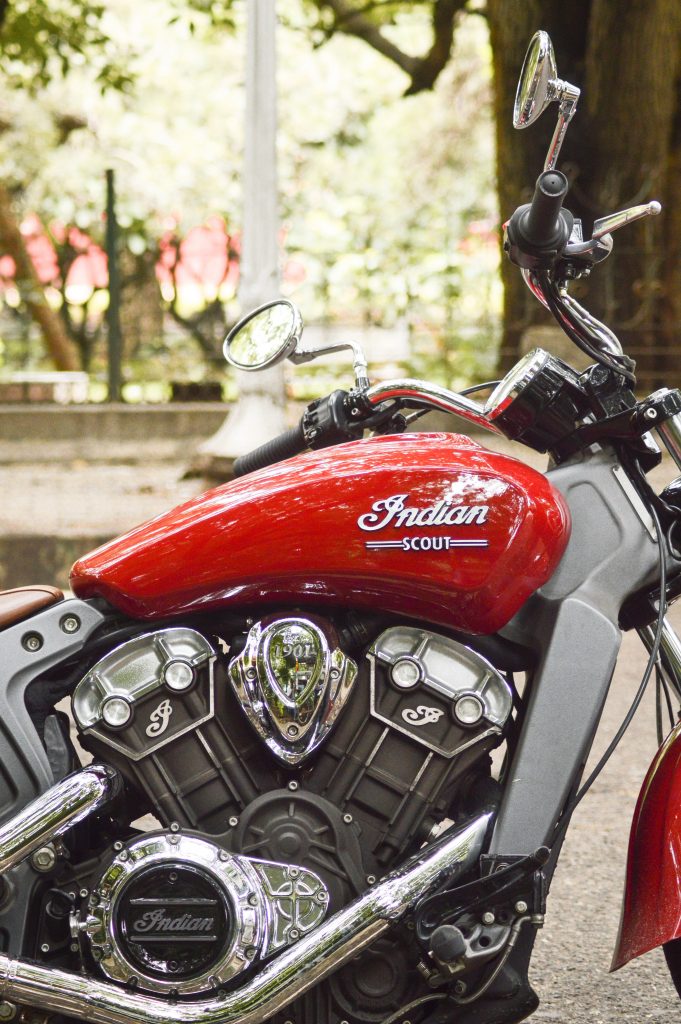 The low centre of gravity of the Scout makes it very nimble and quick, easy to lean into the corners and the 31-degree lean angle lets you get a little aggressive in the curves. The Scout is the first motorcycle in the Indian line up to have a liquid cooled engine. It carries a 1133cc V-Twin engine which churns out 97.7Nm of torque at 5900rpm and a peak power of 100hp @ 8000rpm while the redline is at 8250rpm.

The Scout offers cruiser style low end torque right from 2000rpm which results in easy overtakes without downshifting. One thing which I liked most about the Scout is the ease to handle such a heavy bike in traffic despite the fact that it weighs 250kg. We were riding around Bangalore city and I was amazed to notice its handling abilities. At times I forgot that I was riding a cruiser. The Scout really shines in handling so much, that you can go head to head with a naked bike inside the city by quickly changing the directions. 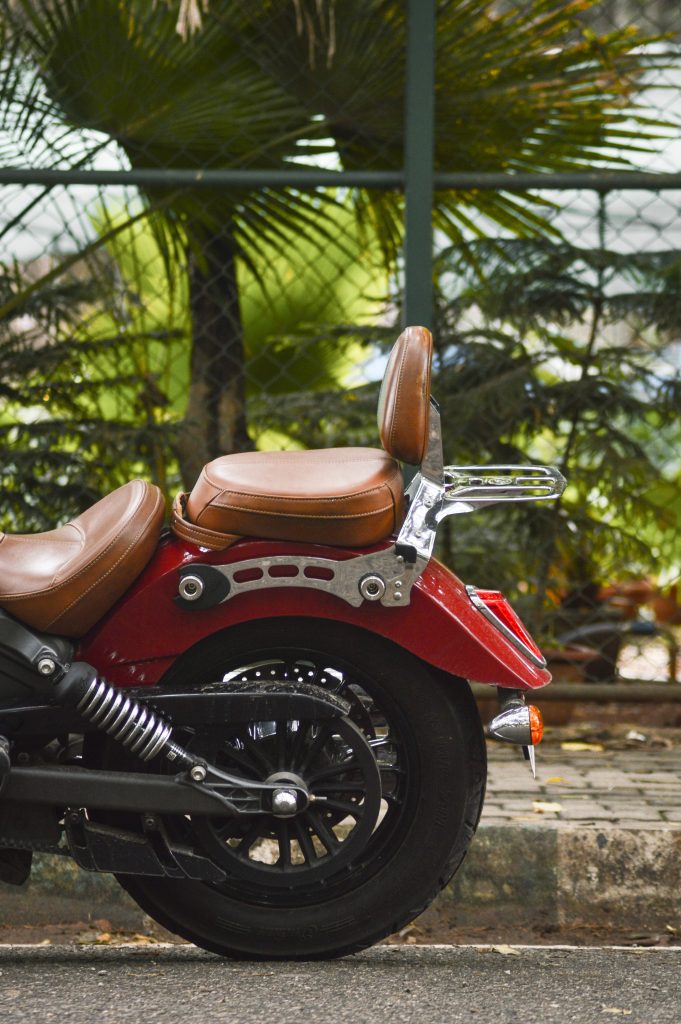 The Scout is equipped with a 298mm disc upfront and 298mm rear disc brakes, and ABS comes as standard; but a bit more effective braking will give better confidence for the rider. A big, 60 mm throttle body with closed-loop fuel injection feeds the Scout, and the split dual exhaust carries off waste gasses with a pleasing note. We wanted more scream and the stock exhaust didn’t impress us much.

The Scout is a bike for people who love to go for rides not just for the sake of society, but for themselves. The Scout is a great replacement for the Harley Davidson Sportster and Forty Eight which have lesser power and torque than the Scout. Even though cruisers aren’t meant for a daily commute, you can use the Scout for the same because of its nimbleness. In that case, you will be a proud Indian carrying a bit of heritage on your daily travel!