If the GLA was a bit too small for your taste, and you didn’t mind forking out that bit extra for something bigger and better, look this way. The mid-size luxury SUV game has gotten hotter with the GLC in the ring.

The wide body and tall stance give it the intent of a proper SUV. It is based on the same platform as the C-Class, but is slightly longer. That wide, prominent grille looks the business and is unmistakably Mercedes material. Mildly swollen wheel arches and a sharp character line along the doors give it a beefy character. At the rear, the raked windscreen and a sloping D-pillar are particularly attractive – our favourite angle of the car; of course, the elongated tail lamps are striking too, while the skid plate and the dual exhausts poking out from the rear further enhance the look on the SUV.

Step inside, and boy – do we love what we see! An interior design along the lines of the new C-Class, which is no bad thing – since when we drove the latest-gen C-Class when it was launched, and thought it was prim-and-proper. A wooden centre console with a whole lot of chrome-finished aircon vents, double-stitched upholstery, buttons with a metal finish, simplistic dials and a rather small-ish infotainment unit. The seats offer ample support and are perfectly bolstered for comfort, leaving us hard-pressed to nitpick.

We found the driving position to be spot-on, thanks to the powered seats and steering adjust. Rear occupants will have no grouse about legroom and headroom, as there is plentiful. With the powered seatback folded, there’s more than 550 litres of boot space. 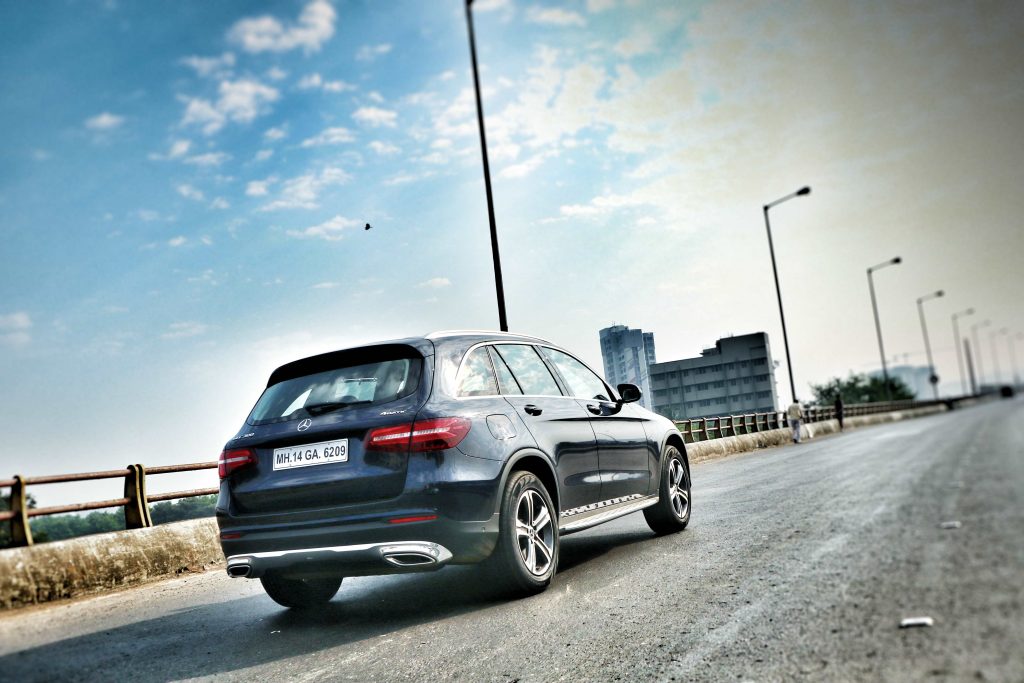 Under the hood, lies a 2.0-litre, 4-cylinder turbo-petrol engine that makes 245hp and 370Nm of torque. Married to the motor is Merc’s all-new transmission: a 7G-tronic, 9-speed torque-converter automatic that is said to help extract better performance and fuel efficiency. 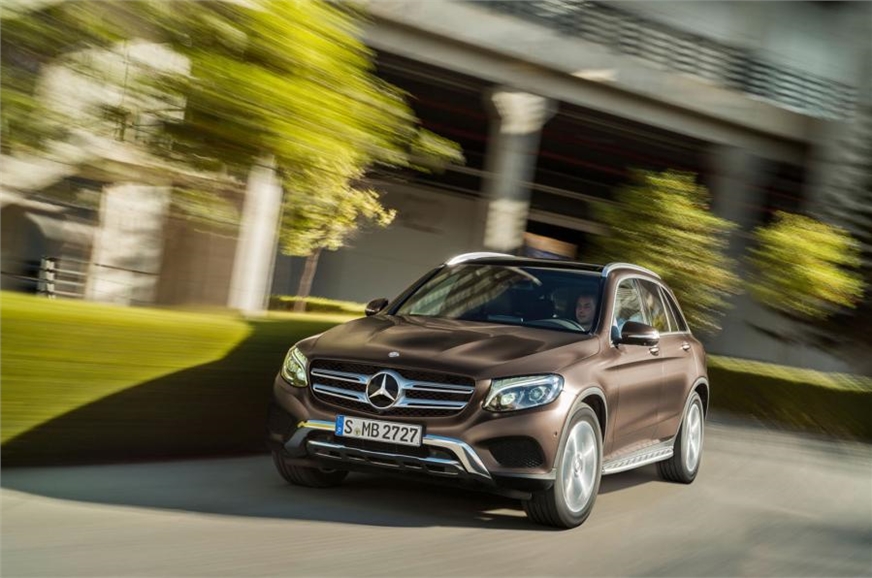 The shifts are effortless – especially in ‘comfort’ mode. You also get Eco, Sport and Sport + modes that adjust the throttle, steering and gearbox characteristics. There isn’t much turbo lag to speak of, and the motor pulls with a firm grunt, while acceleration is linear and more often than not, we found ourselves fidgeting with the Sport and Sport+ modes during this phase of the drive. We also loved using the paddle-shifters; they really do give you a sense of sitting in something sporty.

It manages the 0-100kph sprint in 7.5 seconds, making it faster than its oil-burner equivalent. 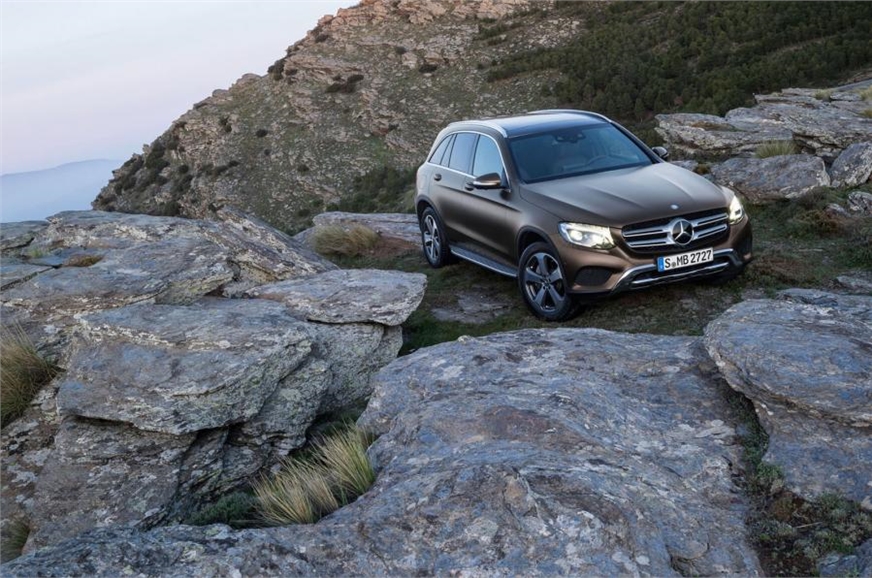 The ride quality doesn’t unsettle the occupants, and the supple suspension iron out most of the rough stuff, also making it the most comfortable of the lot in its segment. There is a bit of bobbing around, but we expect that of a car that rides and feels a bit like a marshmallow.

The steering, at high speeds, instills confidence and is quite progressive for something that isn’t a hydraulically-powered. It’s stable around corners, but there is bodyroll and since it’s a four-wheel-drive, you tend to expect understeer as well. 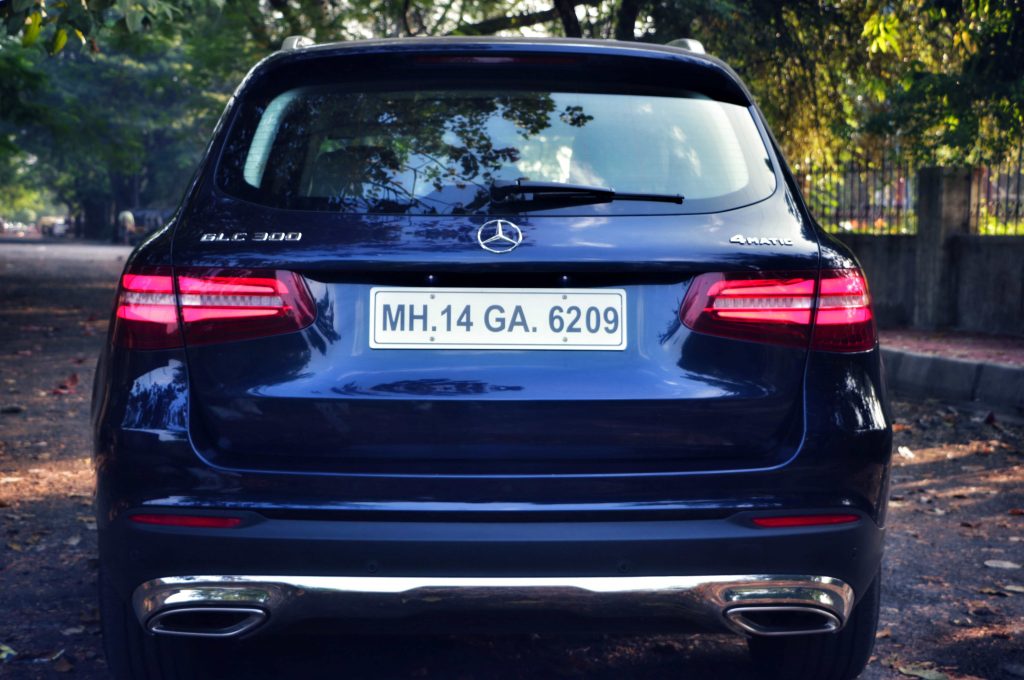 Paying Rs.50.90 lakh for the GLC300 4Matic petrol makes a lot of sense if you’re in for something refined, well put together and an absolute hoot to be driven around in, given just how comfy it is at the rear. Turbo petrols aren’t everyone’s cup of tea, but we can assure you a lot of smiles after buying one of these.