One of mankind’s greatest obsessions is automobiles! In the automobile world, things are quite different. There is an emotional connect between an individual and his car. Be it a very old Padmini or a shiny Mercedes, when you drive it every day, it becomes a part of your life and you just can’t get it out of your head when you replace them. That’s why purists don’t sell their cars and bikes even if it becomes a decade old. Being in this business, let me tell you, if you drive a Tata on a daily basis, you just can’t hate them whatsoever!

Things are on the brighter side for Tata Motors. Let me remind you, Tata Motors’ Nexon just scored a 5-Star rating in Global NCAP crash test, which means the Nexon is the safest car in its segment and also the first Indian car to score a 5-star rating! In the meanwhile, we drove the Tata Harrier, a premium offering from Tata Motors. The Harrier is blindly one of the most anticipated SUVs from the time we saw the concept H5X at the Delhi Auto Expo earlier this year, it has won many hearts. The journey from H5X to Harrier took less than a year and is the first vehicle from Tata Motors to sport the Impact Design 2.0 language and is also developed on the Omega Arc platform from the Land Rover’s D8 architecture. It has been 10 years since Tata Motors acquired the Jaguar Land Rover brand and this is the first vehicle which is said to have been made using JLR ingredients.

In one look, it is understood that Harrier’s design traits are taken from the bigger Discovery Sport. It is very important for a car to look good, since it matters the most. If it has striking road presence, half of the job is done and that is what Tata’s designers have worked on. The Harrier looks close to the concept model and in fact in flesh, it looks even better. The sleek LEDs offer dual functions; it works as daytime running lamps as well as turn indicators. Below the LEDs are the Xenon HID projector headlamps followed by the fog lamps. The front grille comes with a gloss black finish and the front facia has enough road presence to trouble the competition.

On the sides, it comes with a floating roof design with a gently rising window line which ends in the thick black D-pillar where you will even notice a premium touch of Harrier branding on the chrome finished panel. The side mirrors come with logo projectors and are chunky enough, suiting the bold design of the Harrier. The 17 inch tyres fitted to the 5-spoke alloy wheels add to the muscular design and the Harrier is quite a big SUV, with the overall length of 4598mm and an impressive ground clearance of 205mm. To put things into perspective, the Harrier is longer than the XUV500, taller than the Compass and Creta and wider than all the three SUVs. The rear looks as dramatic as the front, boasting of 3D LED tail lamps with a sporty piano black finish. The overall fit and finish of the car is good, but we noticed some visible gaps between body panels and the doors need to be shut with all your strength which makes it a bit tough. 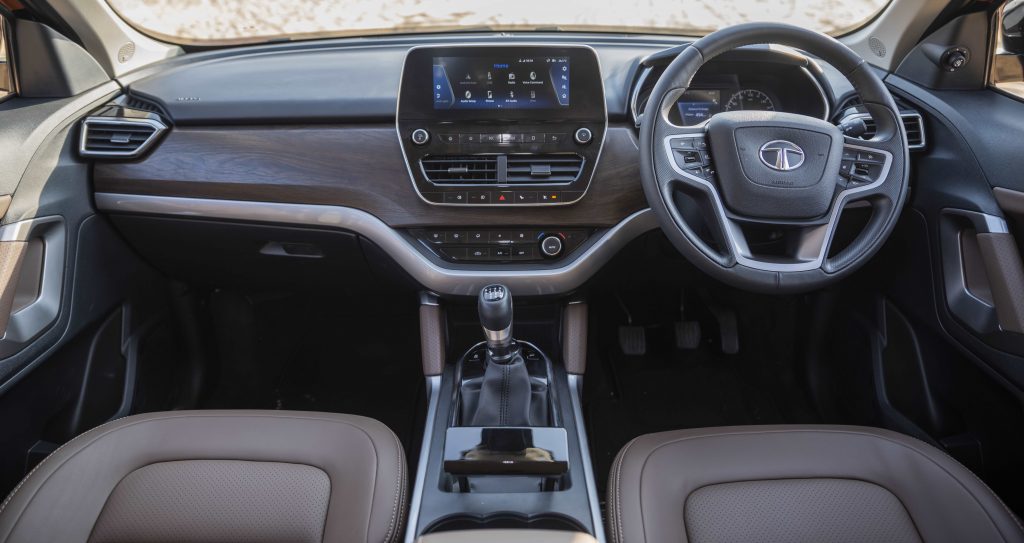 Step inside and you are greeted by a plush and spacious cabin. The dashboard of the Harrier looks premium yet simple. The centre of attraction is the 8.8 inch touch-screen and the faux textured wooden finish. Instead of bringing beige or black, the Harrier comes with a premium looking chocolate brown leather upholstery which goes well with the dashboard and door handles. Overall, it’s a mix of chocolate brown and black along with a silver lining. Even the door handles are finished in perforated leather, which looks premium and solid to hold. 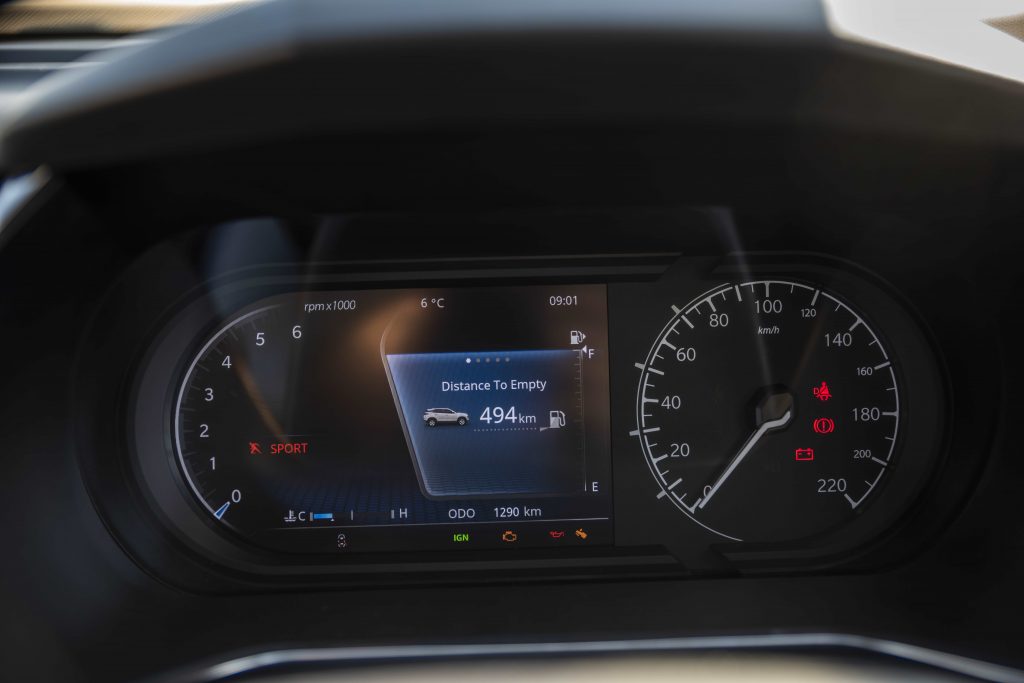 The instrument cluster is a semi digital unit which houses a 7-inch screen. The screen displays a host of information; basically it displays a digital tachometer and a fuel computer. The steering looks basic and doesn’t gel well with the cabin. Steering mounted controls feels easy to use though. The handbrake unlike the conventional ones, is styled to look like it belongs in an aircraft. Tricky to access are the two USB ports in this car, one at the front and one at rear. 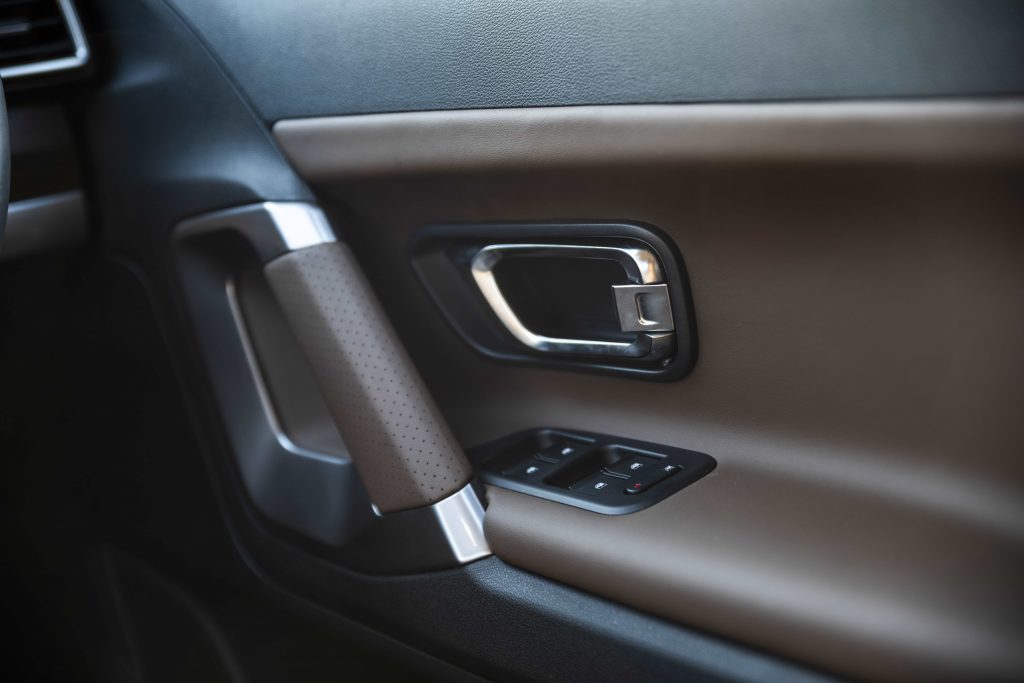 Customers would love to get chauffeured in this SUV. Most SUVs in the market provide little comfort to rear seat passengers, while the Harrier offers ample legroom, headroom and even the seats are wide enough to carry three people. You sit high and get a nice view outside through the large windows while the only major miss is the sunroof. The rear AC vents are fixed on the B-pillars and the Harrier shines on practicality by offering a number of pockets to carry your stuff. Third row seats would come later in 2020. As of now, you get 5 seats and 425 litres of boot space which is designed well to carry maximum luggage.

On the equipment front, there’s a lot to mention such as keyless entry, auto climate control, a rear-view camera and rear parking sensors, cruise control, six airbags, auto headlamps and wipers, and cornering lamps make up the basics. Then there are features that’ll woe you, like the 9-speaker JBL sound system with a subwoofer. Another major miss is the driver’s seat isn’t powered.

How good is it to drive?

The Harrier is a front wheel drive SUV and comes with Multi Drive modes (Eco, City & Sport) with ESP Terrain Response modes (Normal, Rough and Wet) which will help you tackle a bit of off-road terrain. But still, the lack of all-wheel drive and an automatic gearbox is a miss for an SUV of this size. Under the hood is the 2-litre Kryotec Multijet II diesel motor from the Jeep Compass, which packs 140PSof maximum power with 350Nm of torque. However the Harrier offers less power as compared with the Compass. 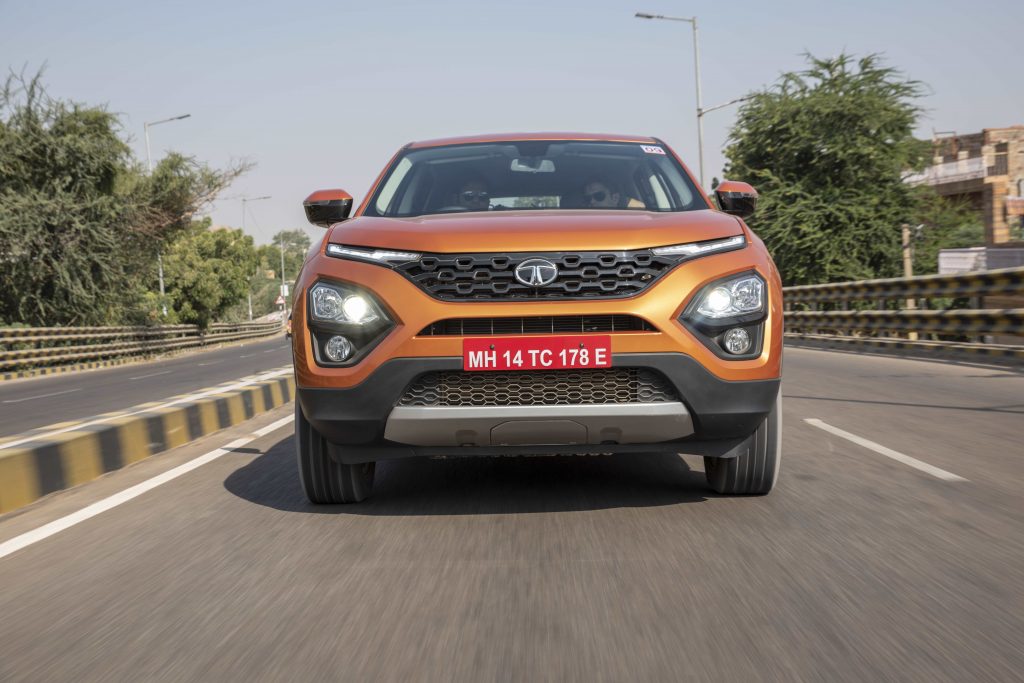 The engine is quite noisy even at idle, and there are noticeable vibrations through the gear lever. There is a clunking sound which is prominent every time when you shift the gear and sadly it affects the passengers too. Other than that, the Harrier cruises comfortably at triple digit speeds and all you wish for is a little bit of power when cruising down the highways. The Harrier is loaded with an independent front suspension and a torsion-beam setup at the rear. You can glide through a rough patch without compromising on comfort – and even at higher speeds, the SUV offers a plush ride.

The steering is a typical old-school hydraulic unit which feels heavy at low speeds. Though with typical SUV-ish body roll and a heavy steering, you get good control over the car with electronic driver aids such as off-road-specific ABS, hill-start assist, hill-descent control, traction control, stability control, corner-stability control, brake pre-fill, brake wipe, rollover mitigation and even hydraulic-brake-fade compensation. The braking ability of the Harrier is good; however we are disappointed to note that the Harrier doesn’t get rear disc brakes. 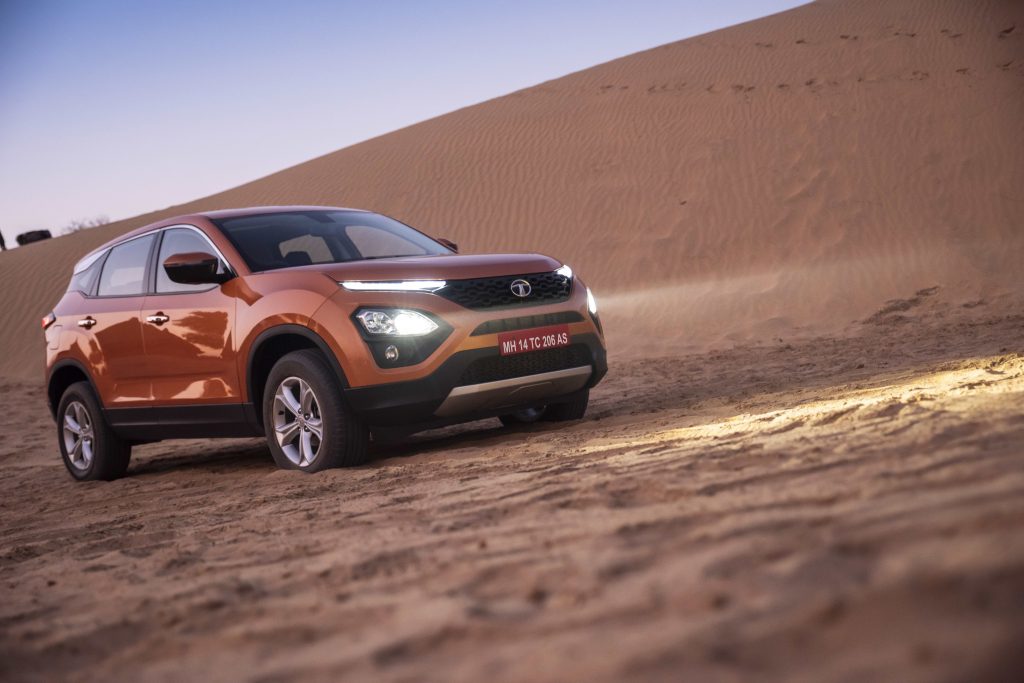 I haven’t seen such anticipation for a Tata product before. The Harrier is surely a global product from Tata Motors. The Harrier looks modern and the road presence this SUV offers is impeccable. Park this car next to the rivals, and the Harrier will be the crowd puller. However, it doesn’t come without any flaws. Some missing equipment along with an auto gearbox would have made this SUV a sure winner. The build quality and package on offer will attract potential buyers; however, we’ll need to compromise a bit on NVH levels. As far as we know, it is going to be very competitively priced. If priced well, this SUV will rule the segment!