The C Segment in India is witnessing a fast shift from Sedans to SUVs. The Vitara Brezza and Creta are prime examples which together sell over 27000 units every month! To capitalize on this trend and in an effort to revive the sales, Nissan is bringing in its contender – The Kicks, which is a globally successful model based on the Micra platform. But Nissan is Indianising the Kicks by building it on the Duster’s A0 platform which is easily one of the most capable units in the country. 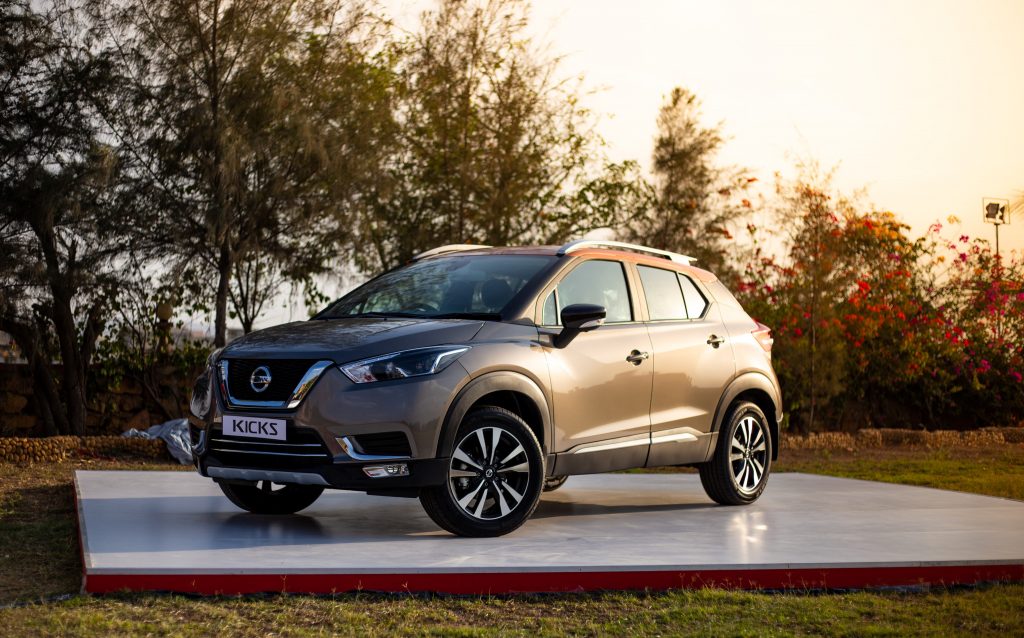 We spent a day with the Kicks on the Great Rann of Kutch and came out thoroughly impressed. We quickly got into the car and the first thing that struck us was the premium soft touch leather finish on the dashboard! And the dark theme of the car with the black-tan color combination gives it an upmarket feel. There is soft leather on the door pads, gear lever and steering wheel, which is chunky and good to hold.

When the seat height is adjusted (manually), it is only the base that moves up or down and that takes a toll on the lumbar support at higher positions. However, getting the right seating position was not very difficult and the visibility all around was very good. The seats all around are very supportive and come with adjustable head rests. Rear seats get armrest with integrated cup holders. The rear leg room is also very good which was a downside in its siblings. Nissan has addressed the issue, and very well. 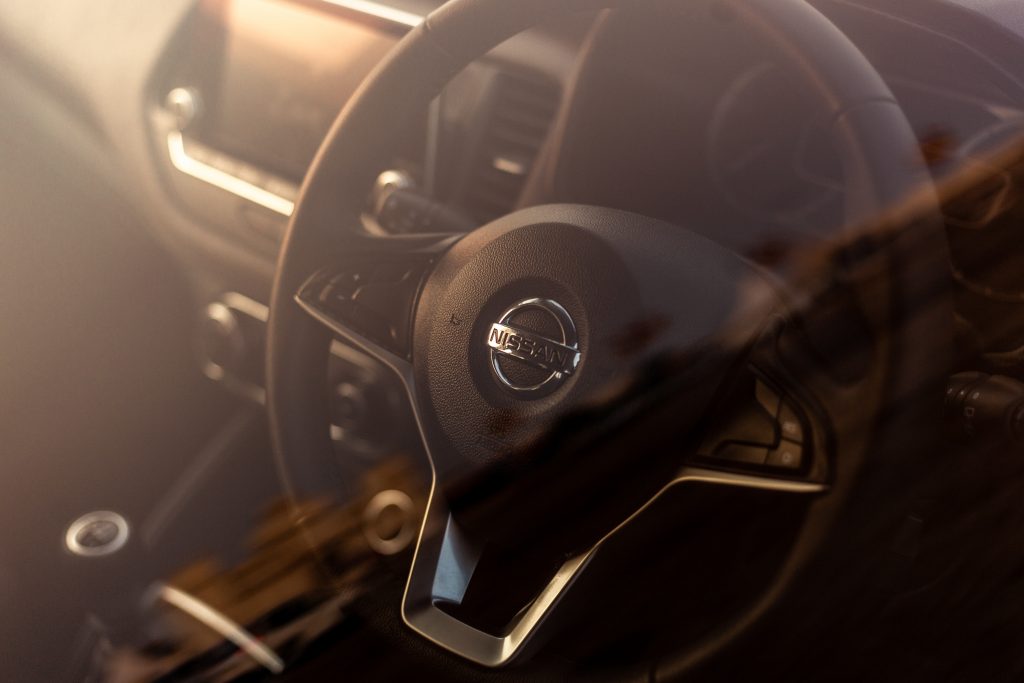 Even though the car gets dark interiors, the large glass area gives it an airy feel and doesn’t feel claustrophobic. There are no cup holders in the central console, but just one deep space ahead of the gear lever. The arm rest is neither adjustable nor gets a storage space under it. The size of the cooled glove box is small & oddly shaped, however, the Kicks gets decently sized door pockets to store knick-knacks. 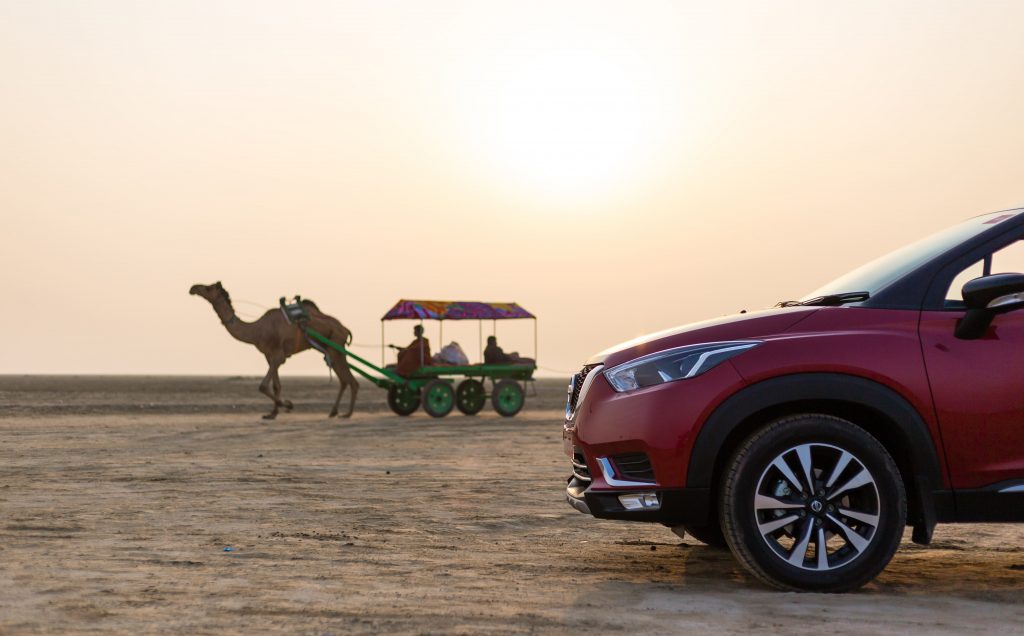 The 8-inch touch screen infotainment system has a plethora of features including Android Auto, Apple Car Play, Mirror Link and the sound quality is also very good. The UI however has some lag in response to touch inputs. Nissan has used the same steering column mounted controls from their lineup and they are not very user-friendly and take a lot of time to get used to. The semi-digital instrument cluster is a direct lift from the Captur with the tacho & fuel guage on either sides and digital read outs in the middle. There are no complaints as this is a well laid out unit and shows all necessary information.

While driving through some of the small roads in Bhuj, the segment first 360 camera came in handy to negate the tight spaces. There is also a mode where only the image from the left side of the car is displayed. A well thought out feature.

We quickly fired up the 1.5L K9K Diesel engine and found the NVH to be a good improvement over its siblings. The 1.5L K9K diesel engine produces 110bhp of power and there is a 1.5L H4K petrol producing 104bhp. We did not get a chance to drive the petrol but the diesel is a gem. It is paired to a smooth shifting 6 speed manual and the clutch is lighter to operate. There is cruise control, speed limiter and an eco mode as well.

Once we hit empty straights, we were ripping the Kicks fast and realized how composed the car was. The car just takes on undulations and rough patches with such surefootedness, so much so that we hit 150+ kmph very often! The ride and handling balance was excellent and we must admit, this is the USP of this car and no other immediate competitor can do this. The hydraulic unit is brimming with feedback at high speeds, which is confidence inspiring but there is some kickback at higher speeds when the car hits a pothole.

There is some body roll due to the huge 210mm ground clearance during cornering, but is very well contained. Braking performance is good but rear discs are a miss! ABS, EBD & Brake Assist come standard and the top variants get 4 airbags and Hill Start Assist. The projector headlamp is brilliant and light up the road very well with a wide throw and the fog lamps also come with cornering function. 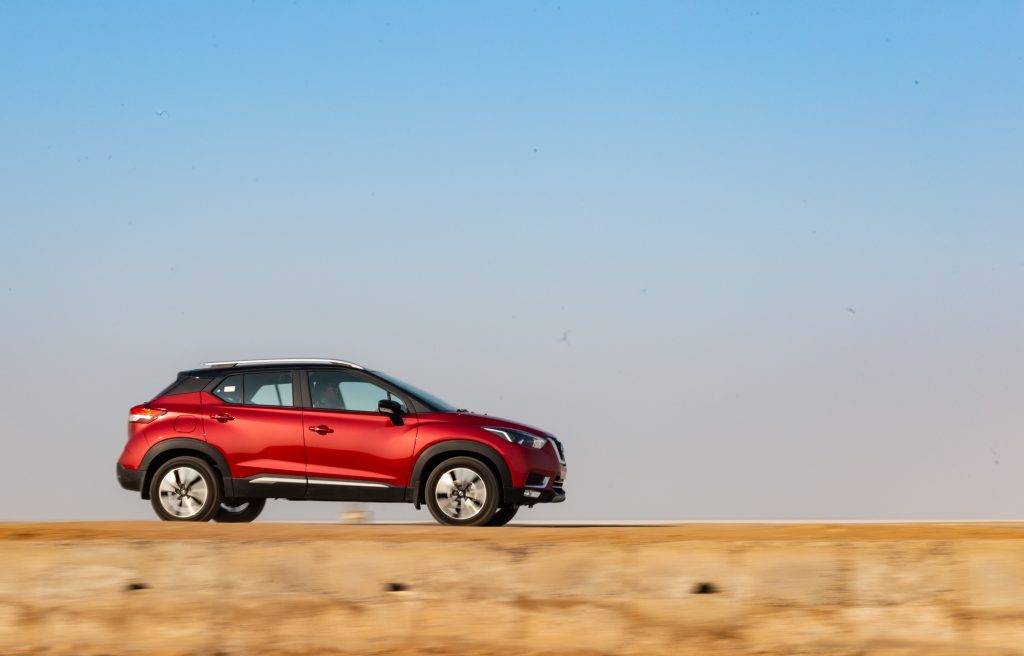 The car has a long wheelbase and is longer than the Captur in overall dimensions. However, the design is so proportionate, that is doesn’t end up looking like an MUV. It looks like how a modern crossover SUV should look like and the V motion grille with the thick chrome dominates the front. On the side the thick black cladding adds to the ruggedness and the 17 inch machine cut alloys fits the design very well. The roof rails are functional and good for 100 kgs payload. The contrast roof especially, the grey-orange combination looks uber cool. The boomerang tail lamps are unmistakably a Nissan! The scuff plate also adds to the premium looks of the car.

Although this was a short first drive experience, we were totally impressed with what Nissan has pulled out. The chassis and the powertrain are the same as the Duster but with a different top hat. However, Nissan engineers have taken right feedback, lessons from past experiences, and improved the product while retaining all the positives of the platform.

Though the Kicks misses out on features like sunroof, auto IRVMs, dead pedals, powered seats, etc, what makes it stand out is the fact that this is the best crossover SUV that you will love to drive and have fun with utmost confidence! Nissan has found a niche in the market and developed an excellent product. A big shout to the Enthusiasts by Nissan : The wait is over!

Well, very soon. Nissan is expected to launch Kicks by January and if they can pull out a surprise price tag, this will turn the tables for Nissan!