The 2018 racing season proved to be extremely successful for IDEMITSU Honda Ten10 Racing team as they grabbed 4 out of 6 positions in the overall national championship concluded today in Chennai.

The team sealed the triple-win in the Pro-Stock 165cc category with Anish locking in the rider’s championship post yesterdays race. The team further asserted their dominance by securing the team as well as constructor championship.

Speaking on the performance of Honda riders, Mr. Prabhu Nagaraj, Vice President, Brand & Communication, Honda Motorcycle & Scooter India Pvt. Ltd. said, “It was the perfect finish to a great racing season. Our riders not only met our expectations but they outdid them by putting the team at such a high pedestal. We are proud that our veteran riders as well as our newly discovered young talent performed phenomenal across this season. Not only have we been able to retain our triple-crown in the Pro-Stock category but also gave a very close fight in the Super-Sport category which has given us a lot of confidence for the next season. We are all set with a much bigger roadmap and future plan for these riders.”

The Race 2 (Super Sport 165cc) today saw power packed performance by Honda riders as they grabbed all three podium positions in the category.

Working his magic in today’s race, Rajiv secured the first position. Completing the podium in the category were Mathana Kumar and Sarath Kumar bagged second and third positions.

In the national championship, Rajiv Sethu and Mathana Kumar won honors for the team by standing strong as first and second runners-up with a total of 145 and 130 points respectively.

Leading from the start, Anish Shetty stole the show with his remarkable performance in Race 2 today. It was a very exciting photo-finish for Anish who chased his competitor to clinch the podium with the slightest margin. 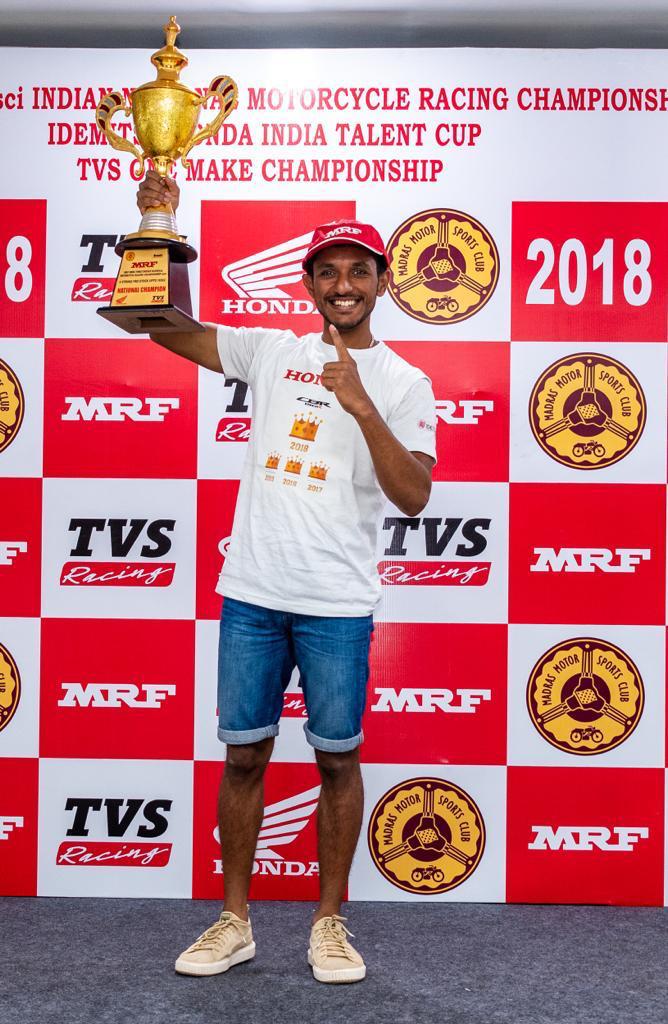 Giving a momentous close to 2018 championship in Pro-Stock 165cc, team Honda grabbed two positions this season. Honda’s star rider Anish Shetty rode home as a champion with a total of 181 points. At the third place, was Honda’s young find, 17 year old Senthil Kumar who closed the season with 118 points.

The Racing weekend experienced an ongoing fight for the win with Abhishek Vasudev finishing first in race 1 followed by Anish, who was second in line. However, today’s race saw a switch in the positions, with Anish clinching the podium win with Abhishek on the second spot. 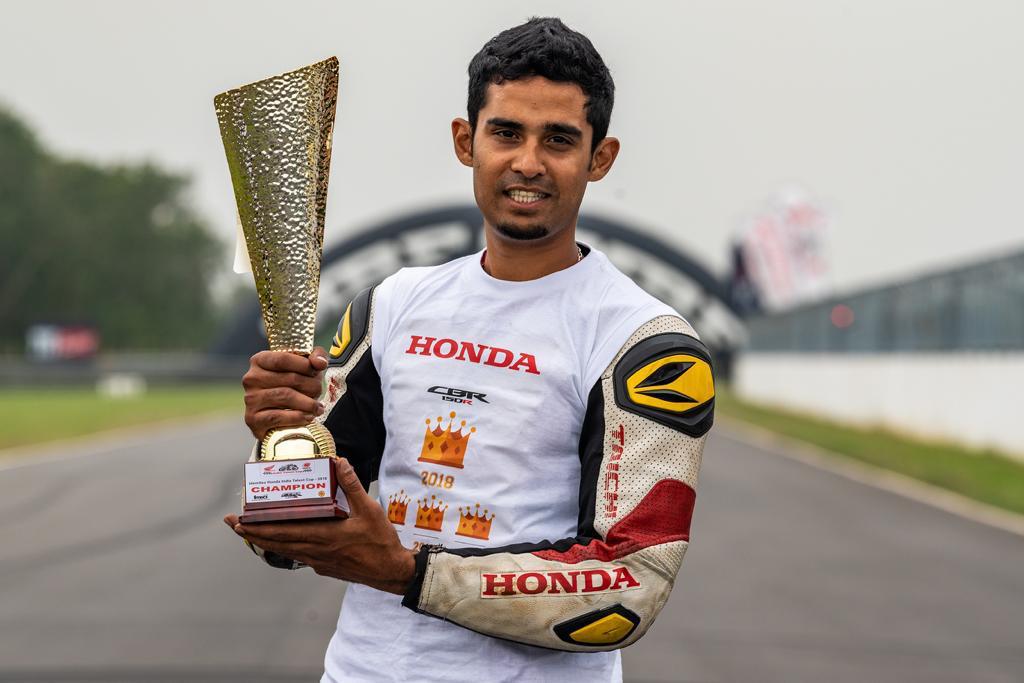 In an intense battle for the concluding victory, the young Bengaluru star Abhishek Vasudev clocked in total points of 171 to seal the championship win in the CBR 250R category.

Second on the leader board was International Rider and Pro-Stock 165cc champion, Anish Shetty who closed in with 165 points. The third position was secured by Senthil Kumar having a total of 140 points.

Giving opportunity to young talent, the novice category saw more than 17 riders competing for the title. It was Mohamad Mukail who rode victorious with a good margin from the very beginning on Race 3. Starting from the 7th grid, Kritik Habib sprung back and finished second. 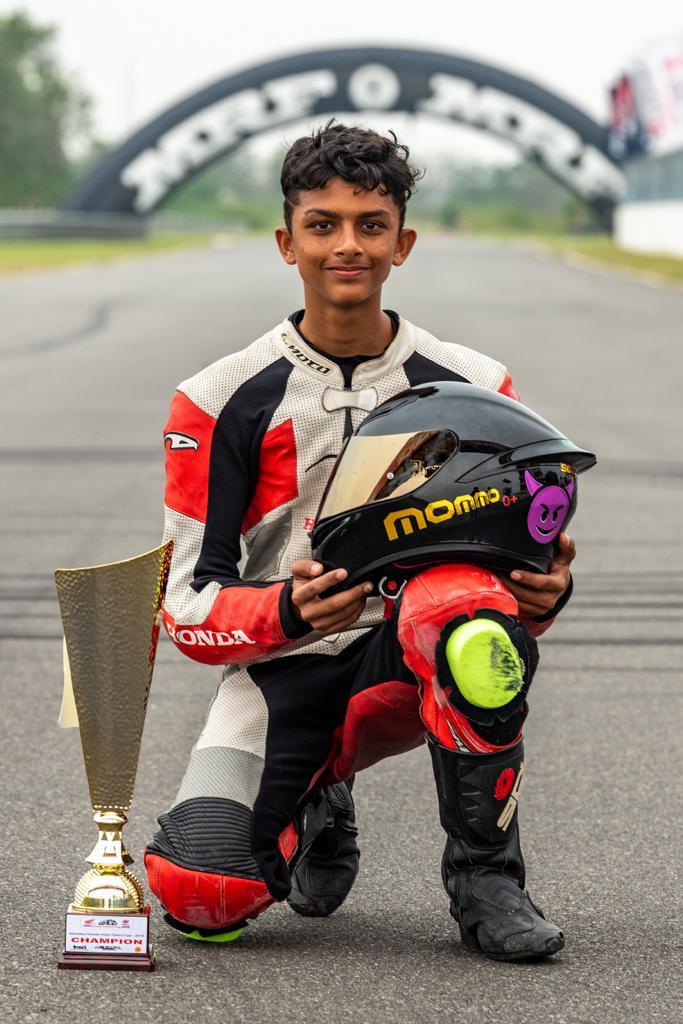 Having top the charts throughout the season, the young star, Mohamad Mukail celebrated his first title win in Honda Talent Cup CBR 150R. Second on the championship standing was Anandhu KK who was followed by another talent hunt find Kritik Habib for third position.

Two out the three new riders (Mohamad Mukail and Kritik Habib) who excelled in the championship with positions were discovered through the Honda Talent Hunt.

Developing young racers, Honda 2Wheelers India introduced Honda India Talent Hunt programme in May 2018. The Talent Hunt has been curated to identify and groom budding racers under Honda’s ‘Catch them Young’ approach. Selected riders are trained at the Honda Ten10 Racing Academy further to which the top candidates get an opportunity to compete in the IDEMITSU Honda India Talent Cup – CBR 150R Novice category. The hunt has previously been held in 4 cities namely – Chennai, Bangalore, Hyderabad and Aizawl. Now, the next round will be conducted in New Delhi on 22nd of December 2018.