Among the public, Harley is almost a generic noun for ‘motorbike’. Your mum’s heard of them, your neighbours want to own one and your friends admire them! Have you ever been into a HOG (Harley Owners Group) ride? It happens across the world. If you ever happen to meet the owners during a HOG ride, you will understand that Harley Davidson is more of a culture than a brand. Though the boffins at Harley Davidson builds brilliant cruisers like the one you see in pictures here, Harley Davidson is an emotion for the biking community across the globe. 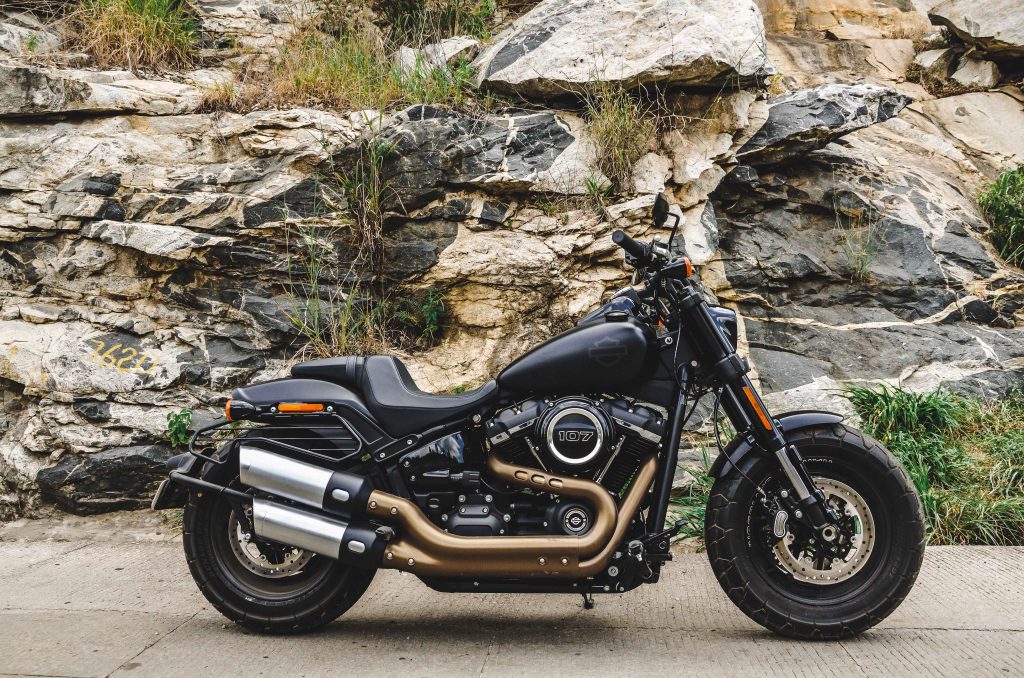 In July 2018, Harley Davidson revealed their future plans which shook the riding brotherhood globally and they all said ‘I can’t believe it’s a Harley’, including me. Harley will be making adventure tourers, street fighters and even electric bikes in the near future.

In the midst of all these, we have ridden the all-new Harley Davidson Fatbob which can be best described as ‘The Muscle Car of Motorcycles’. When we say all-new, we really mean it! The 2018 Fatbob is literally all-new! Previously, the Bobs and Fatboys were into the Dyna family, but have now been consolidated into the 2018 Softail family which includes Fat Boy, Fat Bob, Street Bob, Low Rider, Deluxe, Slim, Breakout and the Heritage Classic.

A Harley can be cool even if it’s horrid to ride and wilfully ugly to behold. Thankfully, the Fatbob isn’t a case in that point. According to me and 7865 people who came and clicked a picture along with the Fatbob during my ride, this is the sexiest cruiser ever built and it is better looking than the previous generation model. Except for the one guy whom I met, told me that he liked the twin headlamps over the new rectangular LED lights. 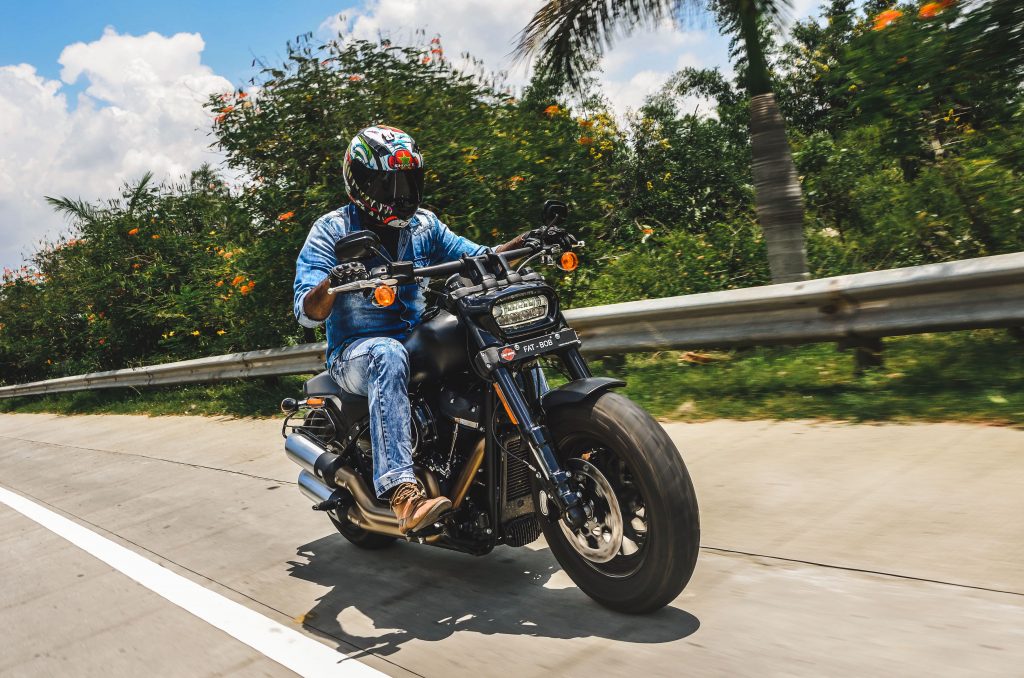 The new Fatbob looks mean and muscular and the LED headlamp sure is an eye-catcher. The 16 inch wheels give a chunkier look, running 150mm at front and 180mm at the rear. Adding to the appeal is the fat 2-1-2 bronze-finished exhaust headers with twin stubby mufflers. The chopped fenders at both ends further enhance the muscular look, but it throws a lot of dirt on your jacket when you ride on wet roads. 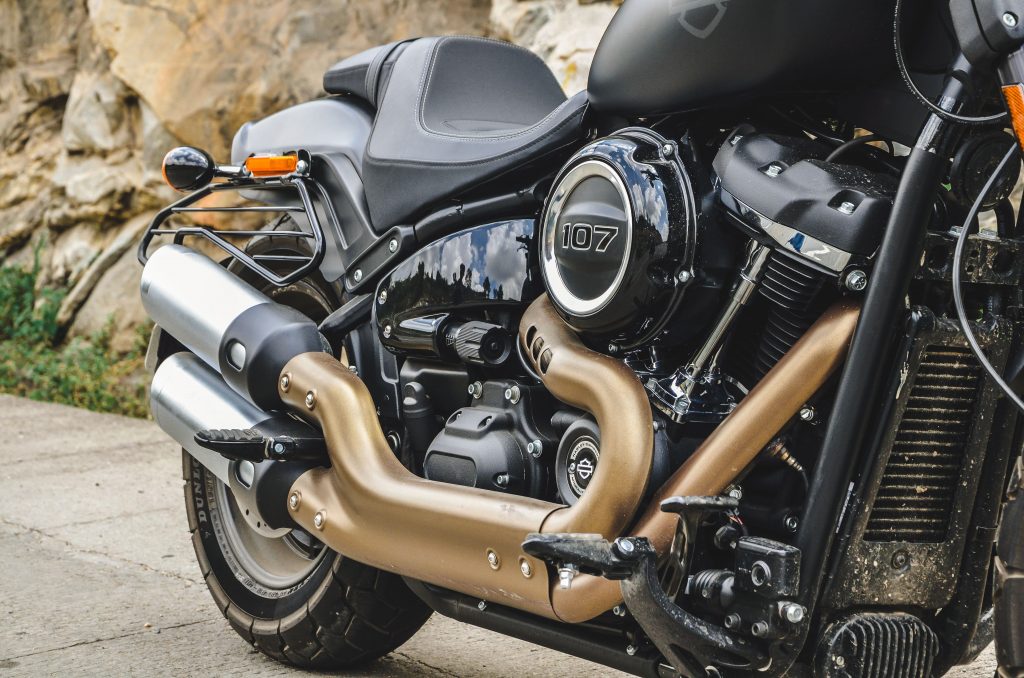 The new Milwaukee-Eight is Harley’s third all-new big twin engine in 80 years, and it brought with it a whole raft of features including four valves and two spark plugs per cylinder, a larger alternator, improved air box and even oil-cooling. This new motor has become the basis for the company’s new Softail line-up. The Milwaukee-Eight is available in two different capacities – the 114 (1,868cc) and the 107 (1,745cc), with India only getting the latter spec.

The mighty V-Twin offer maximum torque output of 145Nm and as usual Harley Davidson isn’t speaking about the power figures. The maximum torque is available right from 3000rpm and the new Fatbob is 17kgs lighter than the old model. 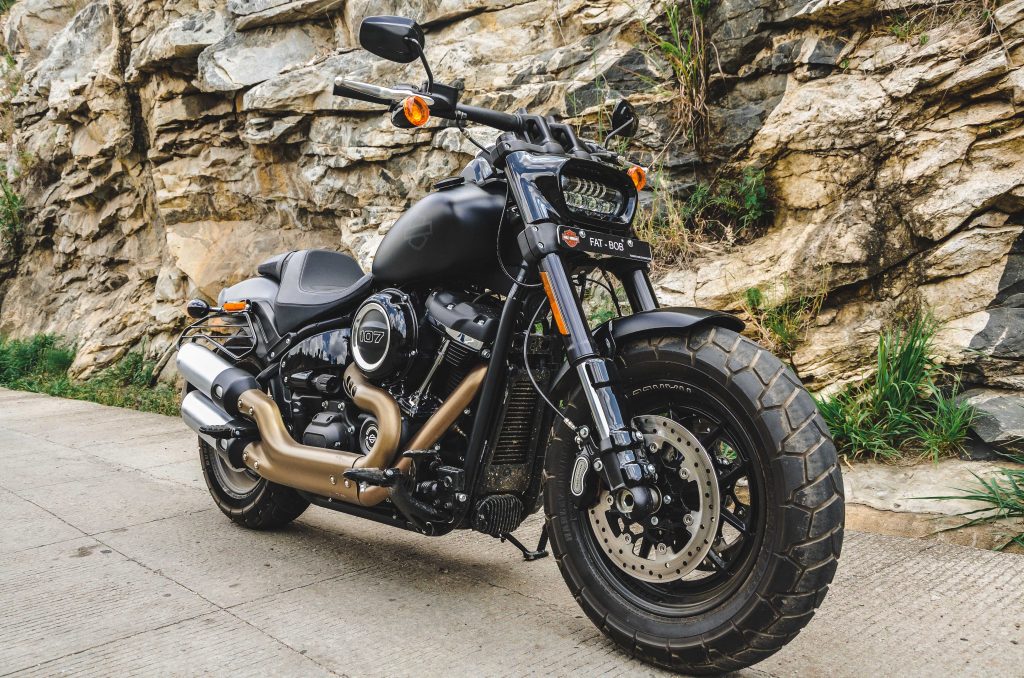 The Fatbob is the only bike in the Softail range that gets 43mm inverted forks and twin front disc brakes. The inverted forks look sportier which also adds handling and cornering ability of the Fatbob. The rear gets an adjustable mono-shock suspension. It’s like Harley is purposely offering the Fatbob to the corner craving riding community with 32 degrees of lean angle. There’s just 120mm of ground clearance, hence you have to be a little cautious over the speed bumps to not scratch the under belly. 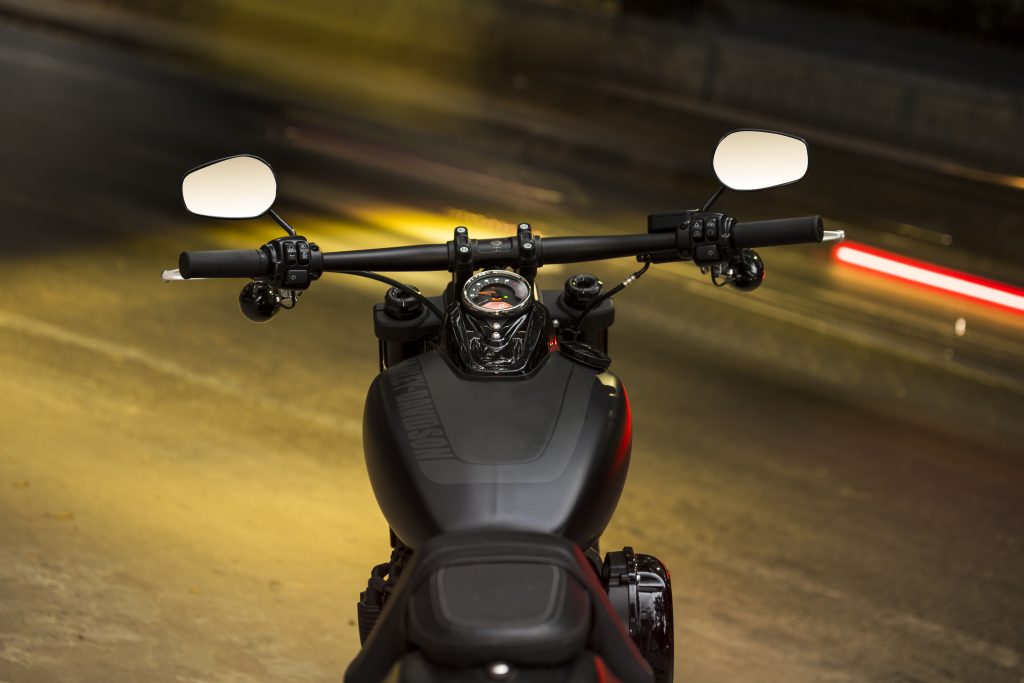 The new instrument cluster looks clean and the keyless ignition makes it easier to operate which comes along with security system. The wide handlebars and forward foot pegs offer good comfort for long rides and the deep seat provides decent lumbar support. You can’t really carry a pillion in the Fatbob since the rear seat is extremely hard. 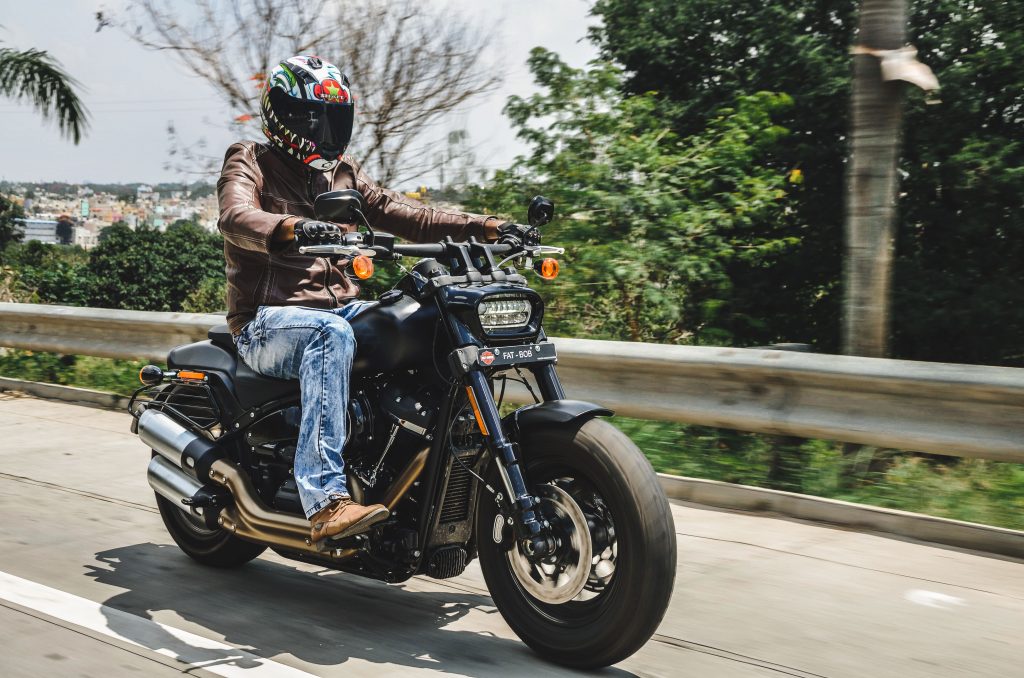 Turn on the ignition and the mighty V-Twin comes to life with the typical Harley thud. Once on the move, the Fatbob feels light on your hands considering this as a 310kg monster. The wheelbase is at 1615mm (slightly smaller than the old model) along with 28 degrees of rake angle. The four-piston fixed calliper up front and two-piston floating unit at the rear offers good braking support while ABS is standard and there is no option of traction control. Twin counter-balancers are installed in Softail line-up resulting in lesser vibrations and the Fatbob offer plush ride out on open roads. This is the kind of bike where you can do a ‘1000kms in a day’ without having an iron butt. The 6-speed transmission works well in Harley-style and you can enjoy how good the torque is distributed along the gears. 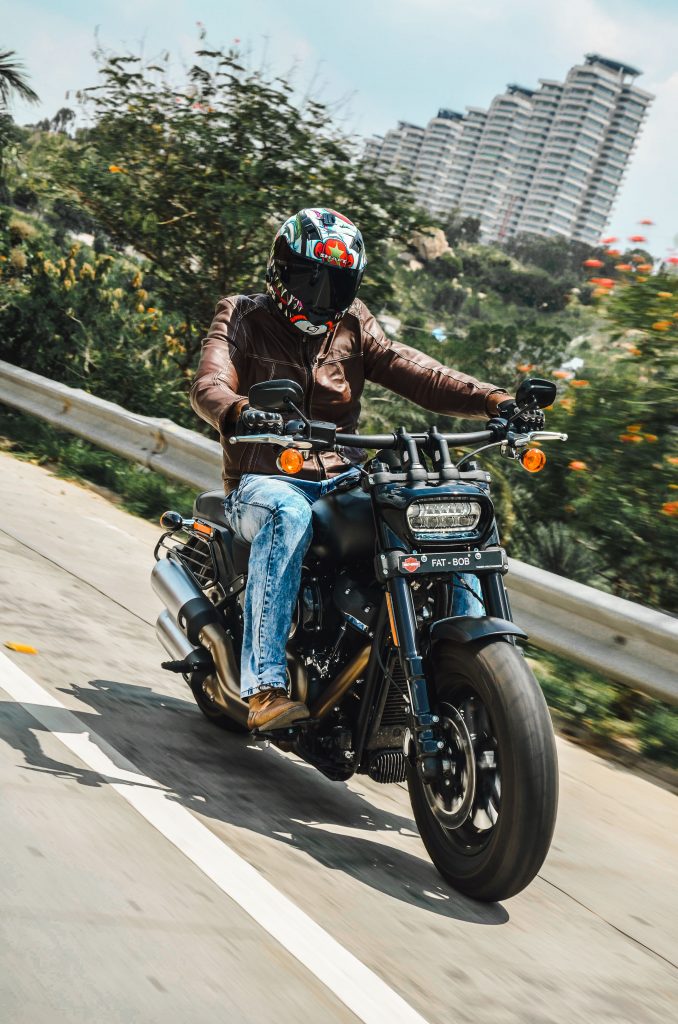 If you are the type of man who likes to spend more time in denims than suits and if you love to stand out of the crowd riding the sexiest cruiser ever made, you will end up buying the Fatbob. And if you do, you had better change the rear seats, thus providing better comfort and add on a screaming eagle exhaust package right from your dealership. In that way, you can literally satisfy your girlfriend and whenever she starts yelling at you, all you’ve got to do is turn on Milwaukee-Eight and slightly twist the throttle! 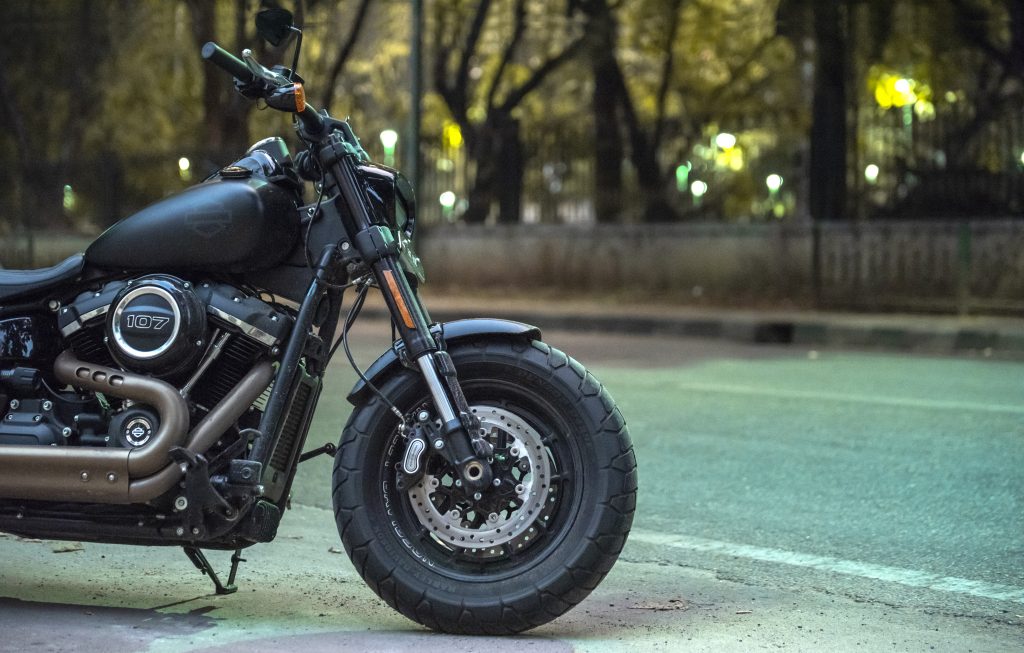