Individual liberty; an ideal World is one where every consenting adult is allowed to live their life in whatever way they choose. As long as you do not touch the tip of my nose, feel free to swing your fists however you like. Having said that, I have in mind the Playboy Empire Hugh Hefner! He is the man we all are jealous of. A man we admire and wished we were like inside deep in our hearts! Well, the car here you are looking at is the Rolls Royce Dawn, the quietest convertible car in the World today; the kind of car Hugh Hefner would be driving around Beverly Hills.

As they say, it doesn’t run on the roads, it glides – literally fits perfect for the Dawn. Every Rolls stays true to this quote, but I felt it suits the Dawn perfectly than the bigger Phantom, powerful Wraith and the smaller Ghost.

Dawn is not a Wraith drophead

Rolls Royce want to make sure that the Dawn is not a Wraith drophead. 80% of the exterior body panels of the new Dawn are newly designed. Both cars come equipped with the same 6.6 litre V12 turbo petrol powertrain; but the Wraith(Black Badge) packs more power with 624 horses while the Dawn’s peak power is 563bhp. The peak torque also differs for the Dawn and the Wraith as 780Nm and 870Nm respectively. Well, the slightly higher power and torque figures are accounted for to balance the heavier Wraith. Visually compared with the Ghost, the rear track is 24mm wider while the wheelbase is 180mm shorter than the Ghost giving it a lower and sleeker finish for the rear. Apart from the aforementioned changes, the Spirit of Ecstasy is made up of beautiful crystal in the Dawn and there is even an additional package which allows you to lighten it up.

On the inside: Ever dreamt of a wonderland made up of wood and bulls leather? 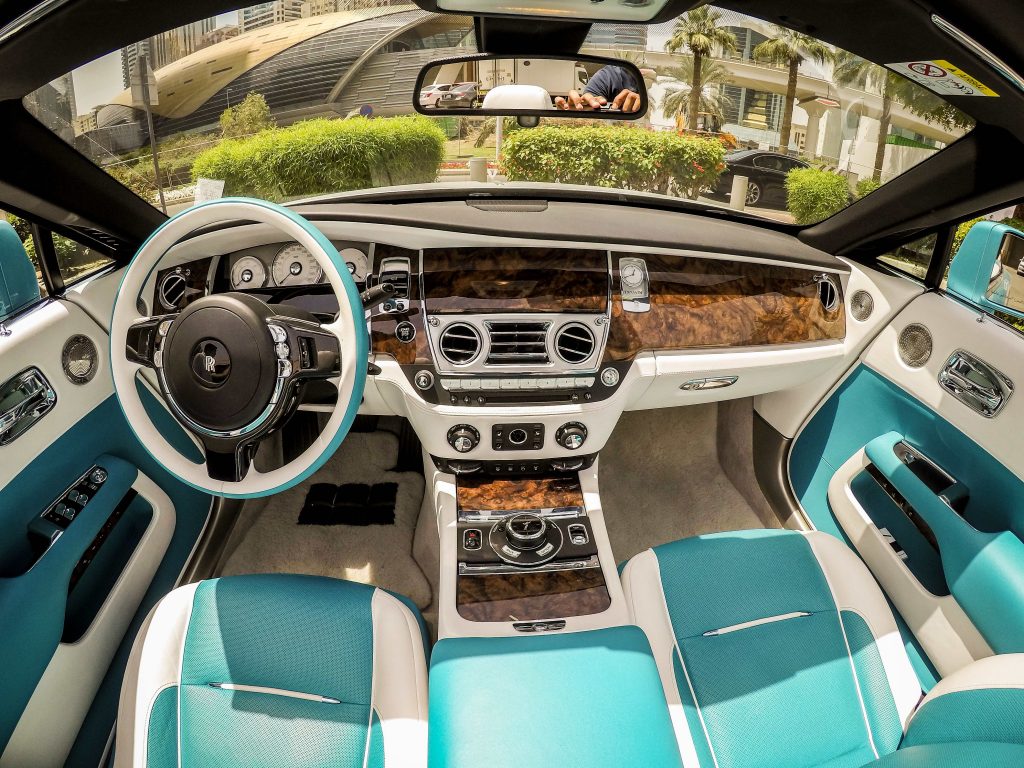 Well, running short of words, the interiors are beyond what we can imagine. Connoisseurs of pristine upholstery would rave about the fact that Rolls Royce only uses bull hides for upholstery since female cattle are prone to getting stretch marks during pregnancy. That’s just a glimpse of the impeccable detailing. Also, it takes 8 bulls to upholster a single Rolls Royce, that’s quite a number! Moreover, the bulls whose skin they use for the upholstery are raised in the region of Europe where the climate is too cold for mosquitoes to live – so you get blemish-free and cottony-soft seats to lay on! Look at our test car! The blue and white combination along with dark brown wood in between looks spectacular. 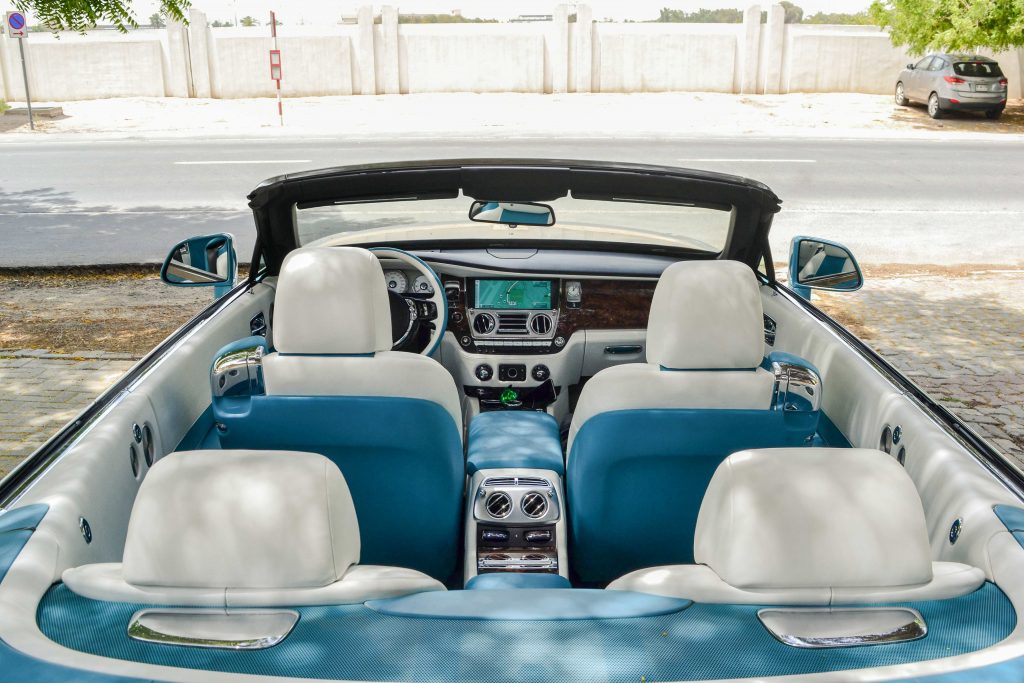 Here’s some advice: Don’t park the Dawn with the top down unless you are ready to talk to your neighbours until 12pm. They’ll come a-knocking, begging rides. And during those rides, other travellers will shout questions at you. From their moving cars!

In the cabin, the Dawn is equipped with all the accoutrements you might expect of an ultra-luxury vehicle with access to BMW’s parts bin, including a touchpad with character recognition for text entry into the navigation system (basically a really beautiful iDrive controller), heads-up display, and dynamic cruise control. 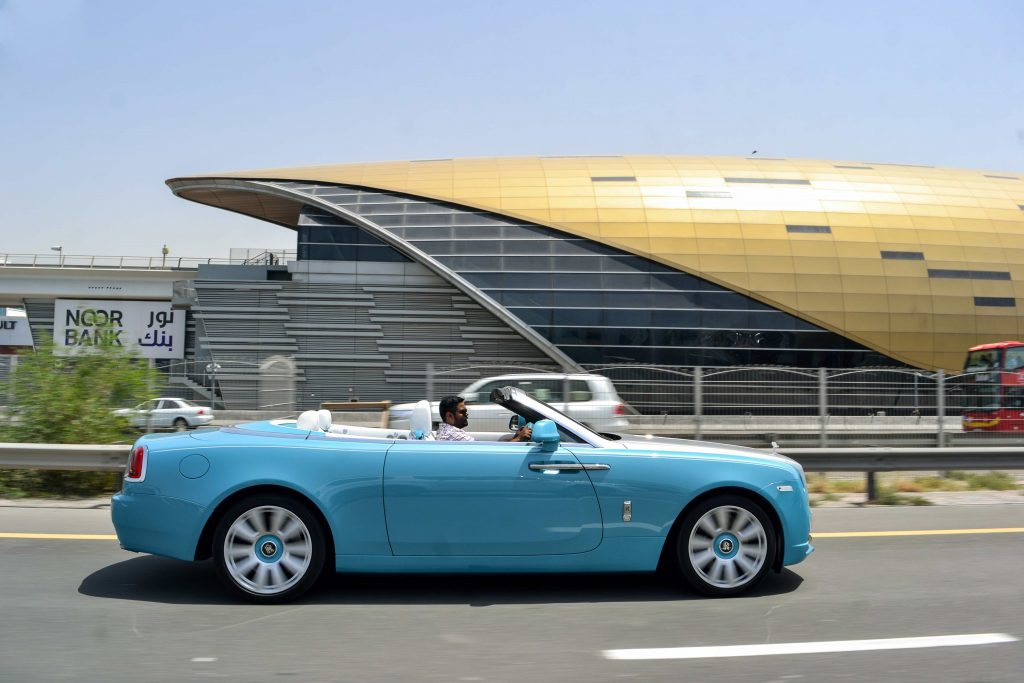 A full 4 seater and the quietest convertible car on the planet!

Rolls Royce made the Dawn as a soft top resulting in making the car full four seater. The Dawn offers the same 36.9 inches of rear leg room available in the Wraith. What’s really impressive about the Dawn convertible is its ultra-silent and fast transmission. Operating in complete silence, the six-layer roof opens up in just 22 seconds and at cruising speeds of up to 50km/h. Rolls-Royce claims the Dawn is the quietest open top car ever made. Its tailored roof reportedly prevents air flow over to create any noticeable wind noise. The car’s bespoke audio system is also designed to stop any noise disruptions that may occur while the roof is down. This was clear in the sound quality while cruising around Downtown. 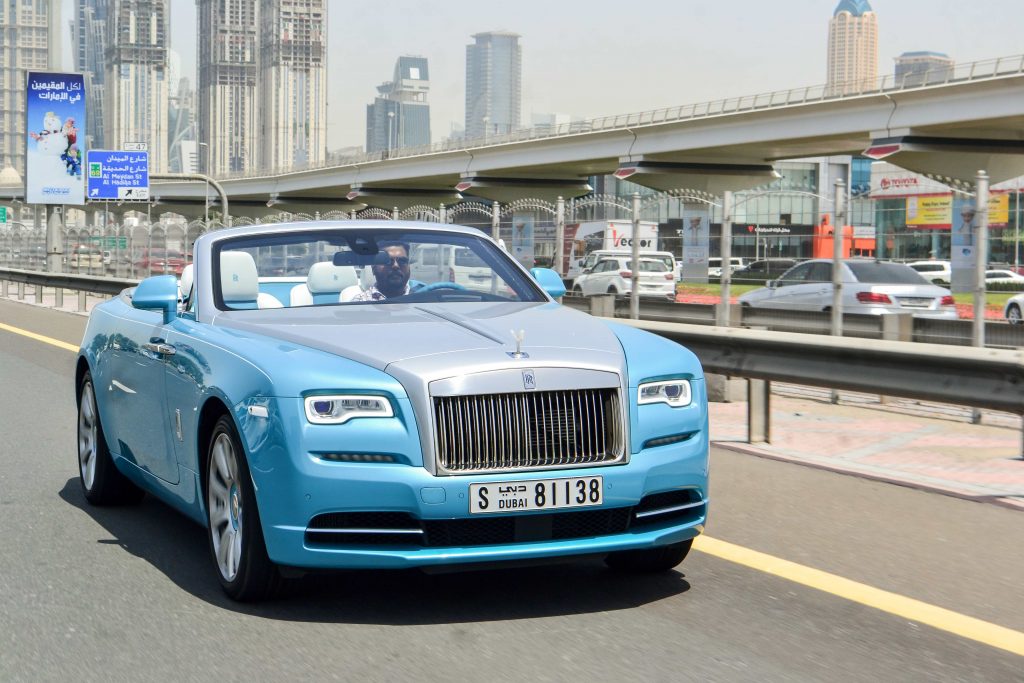 Driving the Dawn is not just lust, it’s pure romance!

The 6.6 litre V12 is absolute bliss. The sound of nothingness even when the top is down and the exceptional ride quality is as always Rolls Royce level. Rolls Royce has made an excellent chassis with a good amount of torsional rigidity despite the fact that the Dawn is a convertible. A small thud on the throttle will help you glide through highways carefree and this has been enhanced by an accelerator that delivers 30 percent increased response at medium throttle resulting in the smoothest feeling of rush, speed and power of the 563 horses under the hood. The romance is further enhanced with Satellite Aided Transmission which comes as standard in the Dawn. 100kmph comes in 4.9 seconds and the Dawn is capable of gliding all the way up to 250kmph (limited). 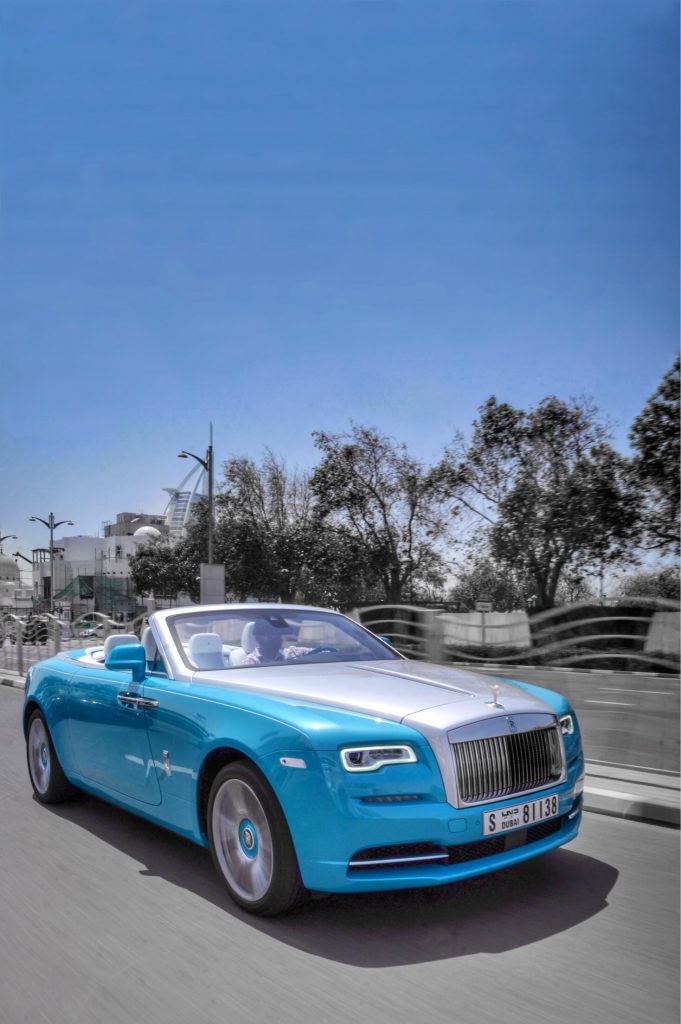 The perfect car for Playboy Mansion

With gorgeous looks inside and out, which can be a threat for your privacy since you will get lots of questions from passers-by, the Dawn has a romantic characteristic, be it in terms of ride quality, design or interiors. The Dawn is the kind of car which exudes individual liberty for people who love and follow their own style in a distinctive manner! And of course, with a car like the Dawn, you get direct entry into the Playboy Mansion!