Launched in one of the fastest growing segments in India, the CB300F has high hopes. The CB300F is available in two variants – Deluxe (Rs 2.26 lakh) and Deluxe Pro (Rs 2.29 lakh).. The CB300F is a handsome looking machine with its aggressive design elements like low-slung headlight, the golden upside-down fork and the sharp, intricate, ‘floating’ tank extensions. At the rear, the stubby exhaust can and sleek tail gives the bike a nice look. However the downside is that, even with such a good road presence, the bike looks like a chunkier Hornet 2.0.

The CB300F gets all-digital LCD instrument cluster features Bluetooth on the top variant (the only difference between the two versions) and Honda is also giving you all-LED lighting, a type-C USB charger, an assist-and-slipper clutch, dual-channel ABS and traction control. The Honda CB300F is powered by a 24.1hp, 25.6Nm, 293cc, 4-valve, oil-cooled, SOHC engine that’s paired to a six-speed gearbox, with a slip-and-assist clutch. 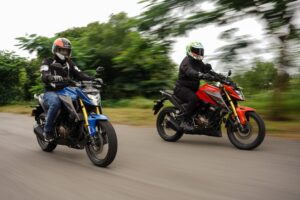 Out while riding, the performance from the engine doesn’t live up to the hype. It is more like a soft motor which is supremely comfortable for city use. It doesn’t feel as sporty or as aggressive as it looks. Also, the bike is not impressive at triple digit speeds. There are visible amounts of vibrations post 100kmph. The best part is how good the bike handles. With specs like Showa USD forks and chunky rear tyres, the bike feels confident and grippy. The light weight package is the highlight. With 789mm seat height, the bike feels accessible for most of the riders. Honda usually scores with the refined motor and handling. It goes the same with the CB300F as well. This is more like a comfortable big-city bike rather than a naked streetfighter.