There are few cars that are labelled as segment breakers, and the Renault Lodgy is one of them. Renault’s proposal is to launch the Lodgy in April, and we’ve already managed to grab ourselves a quick drive in the MPV. We don’t usually praise cars unless we really like it. Cars like the Lodgy focus more on customer satisfaction. During the briefing session, Renault officials shared some valuable information about the Lodgy. We could grasp just how good the Lodgy is when compared to its rivals, and from what appears to be seen, the Lodgy looks both – well-built and promising! 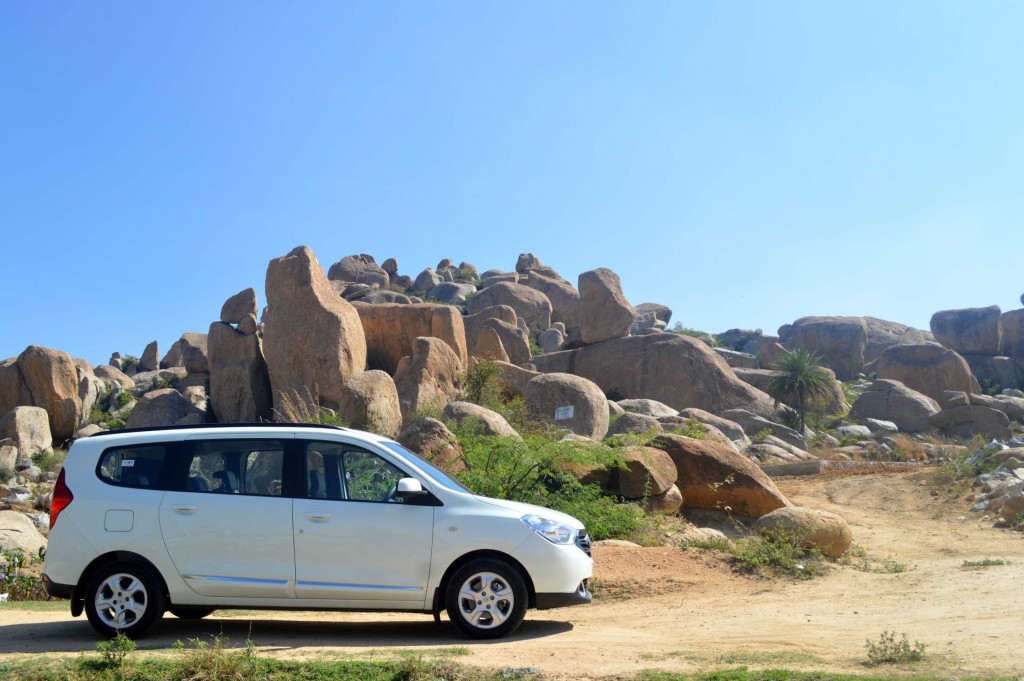 The Renault Lodgy is all about oodles of comfort and space! It’s massive — 4.5 metres long, 1.7 metres tall and with a 2.8-metre wheelbase(slightly more than the bigger, more expensive Toyota Innova) — just the kind of dimensions you want for good interior space. The Lodgy is originally a Dacia product (as was the Renault Duster). With its large cabin area, stubby bonnet and long wheelbase, it is not outright attractive, but Renault has tried to give it some flair. The front gets an interesting grille design around the Renault lozenge, a pointed airdam, and headlamps that house daytime running lights in the corners. The side profile is fairly bland, but a couple of chrome strips along the bottom try to liven things up. The 15-inch alloy wheels with 185/65 R15 tyres look fairly small in comparison to the bulk of the body. At the rear, the dominant feature is the pickaxe-head shaped tail lamps. 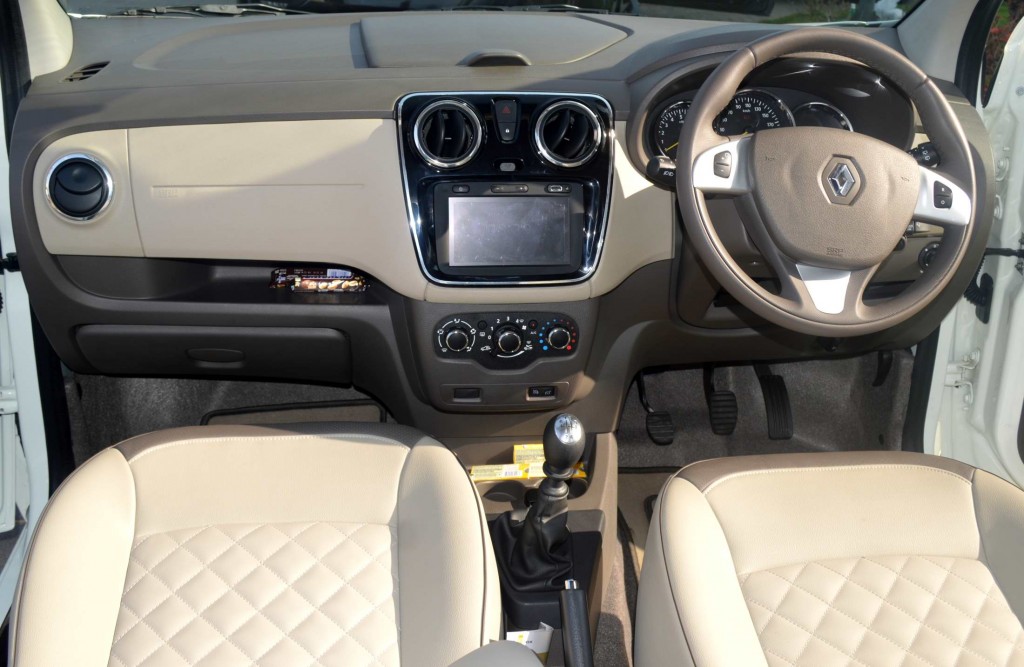 Ingress and egress is never a hassle; the car is at just the right height for you to walk into. Once seated, you’ll notice the dashboard, which is unique to the Lodgy but still feels very familiar to the Duster’s. And that’s not all; parts like the air-con controls and vents, gear lever, dials, stalks, steering wheel, window switches, and most of the buttons are lifted from the recent AWD version of the SUV. Even the front seats seem to be identical, though these are tastefully upholstered in quilted and perforated leather, which look quite plush. The other elements that augment the premium feel in the Lodgy’s cabin are the dashboard’s brown and beige two-tone colour scheme and the glossy piano black centre console with silver accents. 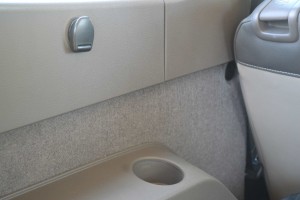 We have side pockets, cup holders and charging points till the third row. 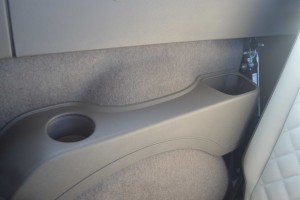 It’s a pretty practical cabin too, with each row getting two bottle holders and a 12V charging socket of its own.The middle row gets two seating options, depending on the variant you buy. The seven-seat variant gets two individual “captain” seats in the middle row, which have armrests, can recline and tumble fold. This variant also gets foldable food trays behind the front seats with buil- in cup holders. The eight-seat variant gets a middle row bench that split folds in a 60:40 ratio. It has a drop down armrest with two cup holders in it. This too can flip and fold. 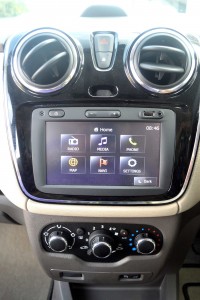 This top-spec RxZ, has, by segment standards, a good amount of equipment. Starting with the touchscreen unit that’s been plucked from the Duster — it houses USB and aux inputs (no CD player), as well as satellite navigation. It also comes with a rear-view camera and rear parking sensor, handy on a vehicle as massive as this. Of note, the roof-mounted air-con system has been specially developed for the Indian Lodgy, and gets air-con vents for the rear two rows as well. 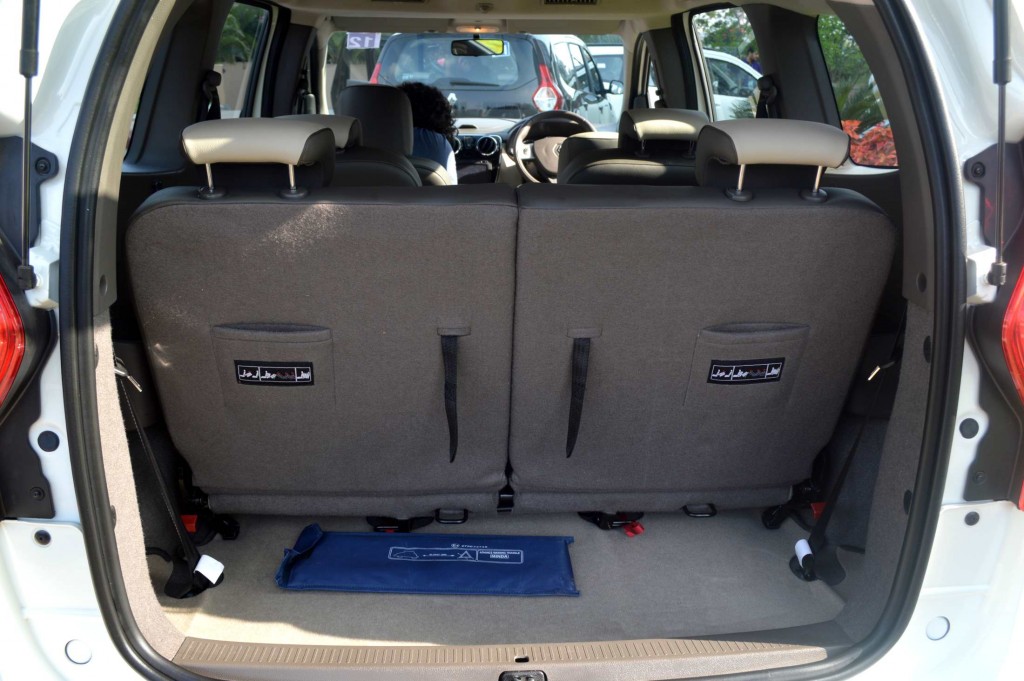 Luggage space with the 3rd row on! 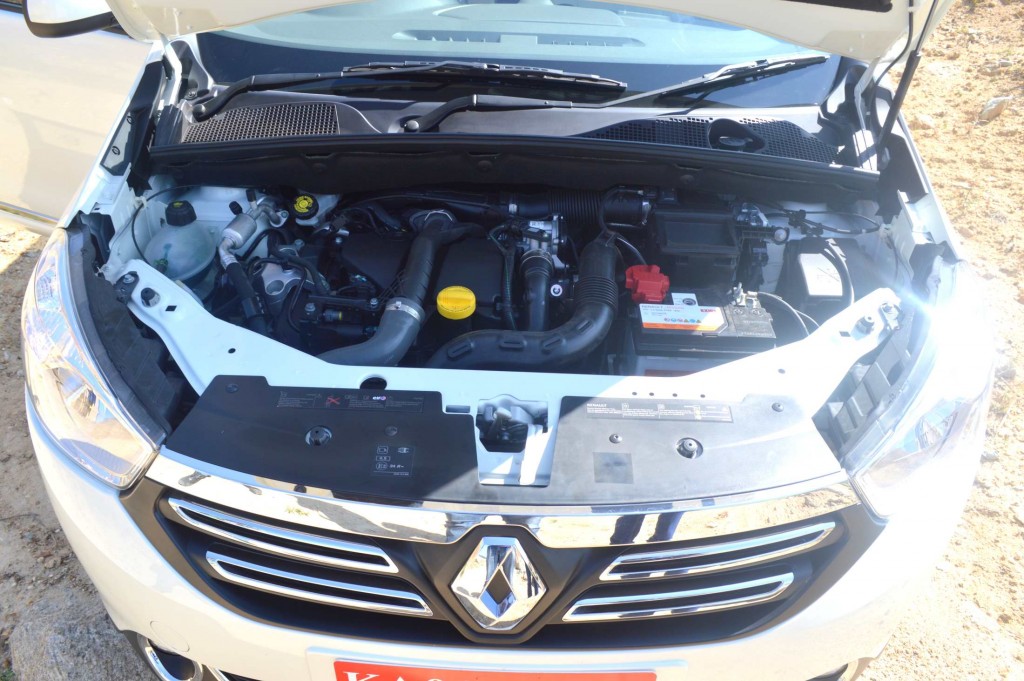 The Lodgy builds peak torque at only 1750 rpm, and at low speeds there is noticeable turbo-lag, especially if you drop speed to a crawl in second gear for a mammoth speed breaker. However, if you learn to adapt to this behaviour, it becomes fairly frisky to drive. Once out on the open road, it picks up quickly in the remaining four gears. In sixth, the engine feels unstressed. At 100 kmph, it manages doing 2000 rpm. And that translates to decent fuel economy too.

Just like the Duster, its sibling, the Lodgy has a flat ride quality, with the suspension on the brittle side. Body roll isn’t too evident, and manages to mask itself well, as opposed to other MPVs. Bumps, potholes and rumble strips were pummelled without any fuss. NVH levels are excellent. At a speed of about 100 kmph, the engine feels like it is ticking over at just 2,000 rpm, and with plenty of sound-deadening around the cabin and under the bonnet, it is hardly audible inside. Neither is wind noise or road noise, which will make long drives quite pleasant. 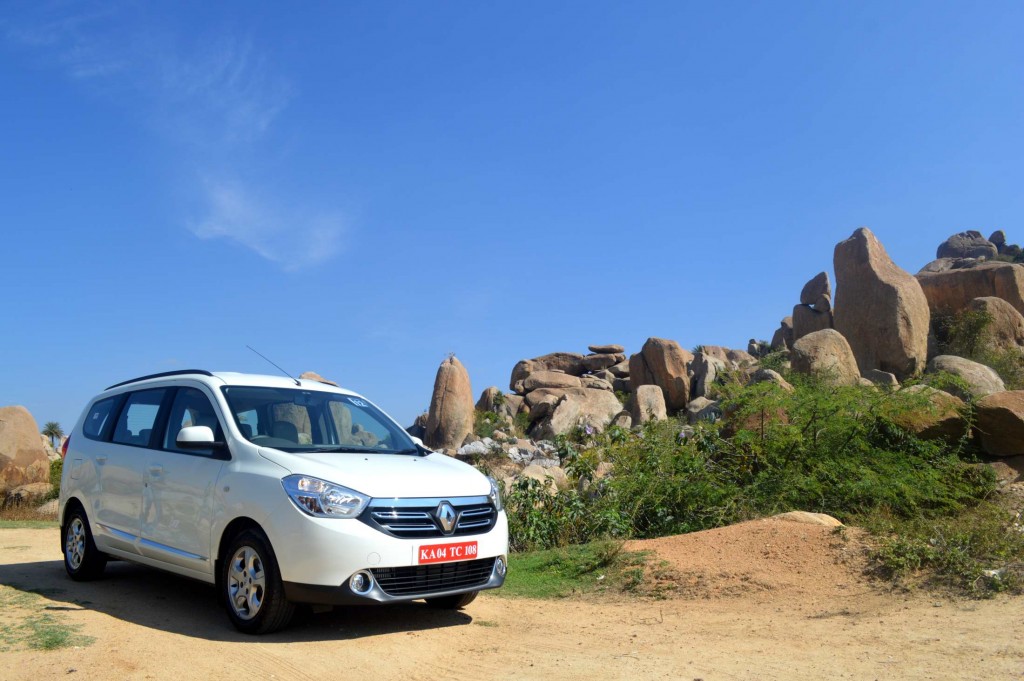 The electro-hydraulic power steering system weighs up nicely and gives just the right amount of feedback to the driver. It feels very car-like to drive – you really don’t feel like it’s an eight-seater. Quick lane changes don’t induce a lack of confidence to push harder, and the brakes are sharp and offer good bite. 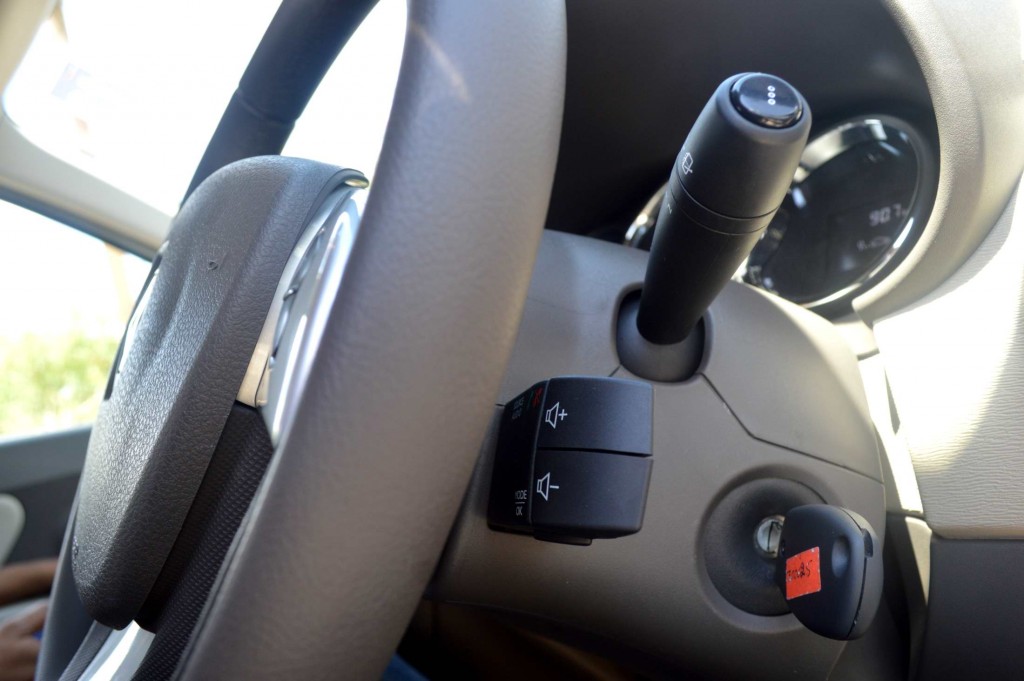 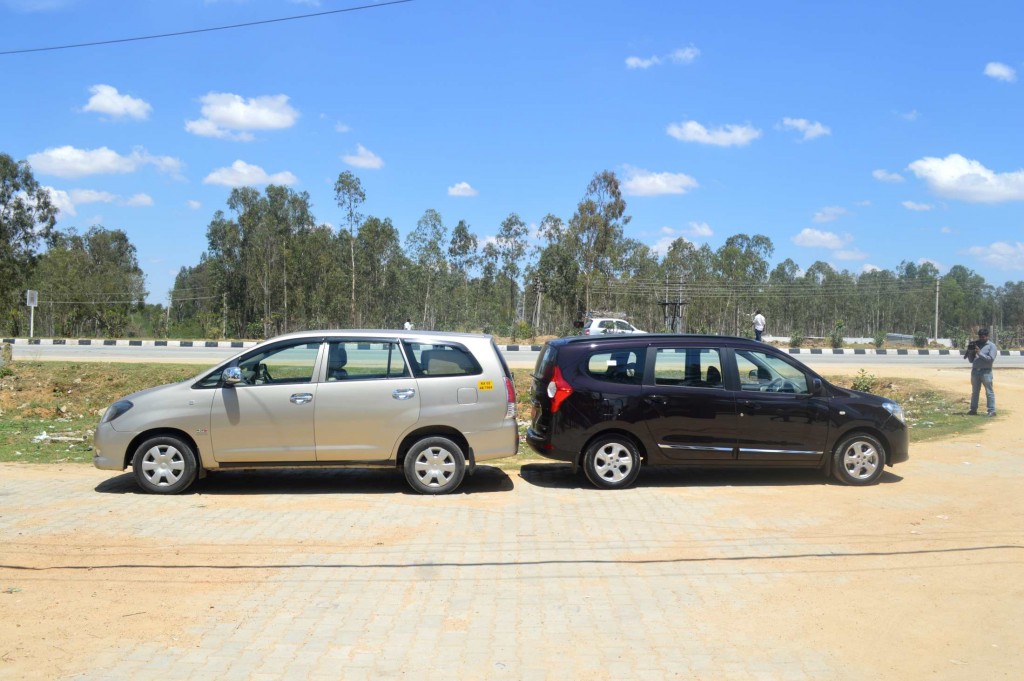 It offers plenty of room, is practical and easy to use, and the 1.5-litre diesel motor has found its home under the bonnet of the Lodgy. In terms of positioning, the Lodgy — by virtue of its size, cabin space and power — is in Innova territory. The key factor, as ever, is price – and if Renault manages to find a sweet spot in the sub-Rs 15-lakh range, this could well be the carmaker’s next ticket to stardom.