Not so long ago, Audi was ruling the roost with some really hot cars; it was a market leader in the luxury segment with the Q7, A6, A8 and the R8. Soon however things got a bit rough, the limited range of cars resulted in not so impressive sales, Audi though was quick to react to this by launching 5 new models in the previous year and many lined up for the current year too and it began the bang with the facelifted Audi A4. In a segment dominated by the likes of the Mercedes C Class, the BMW 3 Series, the Jaguar XE and the updated Volvo S60, the A4 does have its task cut out. 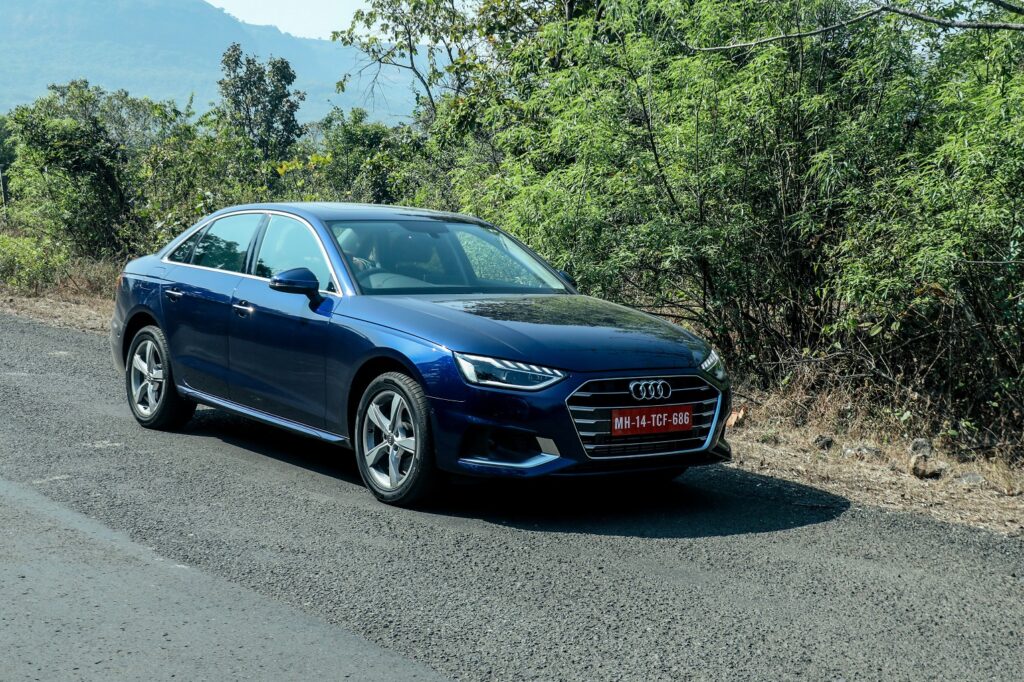 The facelift A4 isn’t just a quick marketing gimmick, it is a properly new car with a new engine and body panels, The LED headlamps now flaunt the slotted brows and the car itself has a sharper nose. The Car is loner by 5MM and wider by 24MM giving it a good stance, the Rear has also been updated with LED tail lamps and a sharper distinguished rear. The Alloys though look a little out of place in this otherwise beautiful European design. 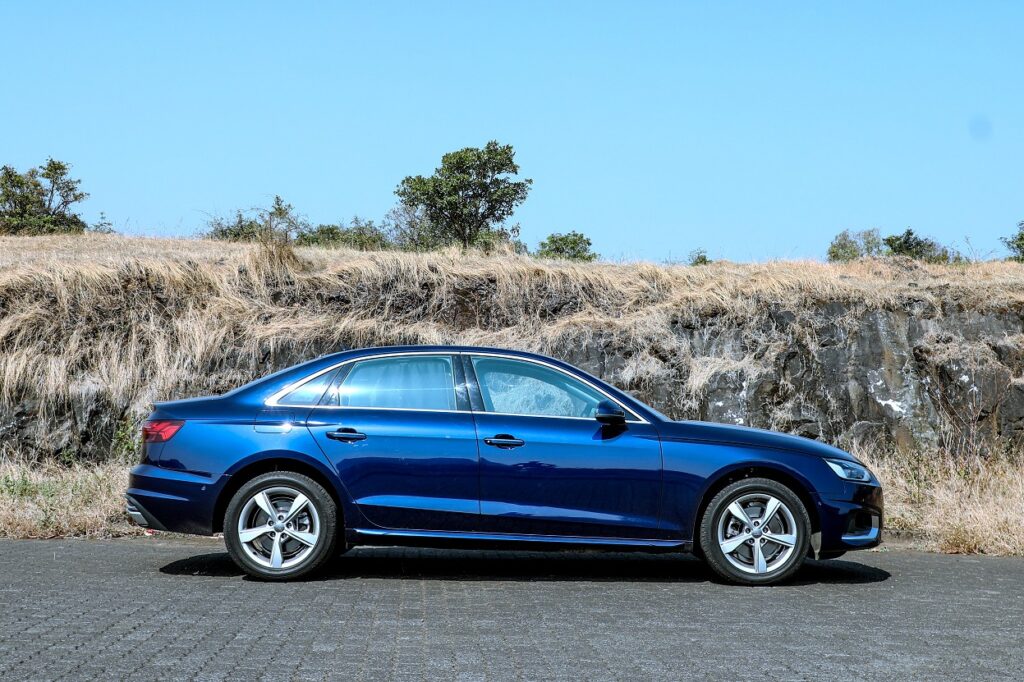 The Side silhouette is clean with the right creases and crisp lines. 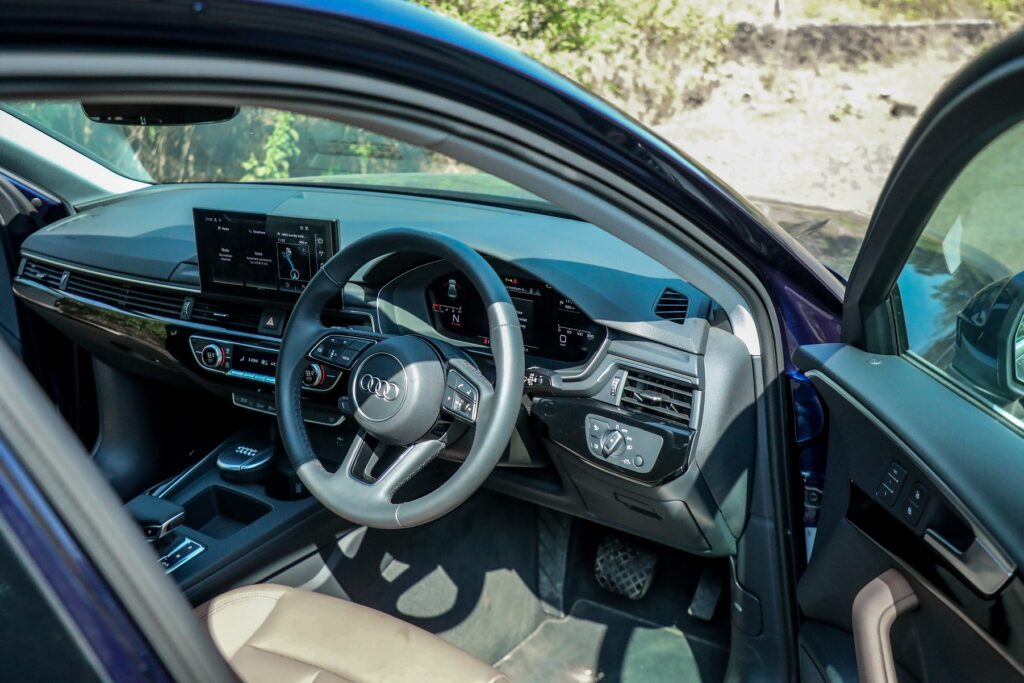 On the inside you are welcomed by a 10.2 in touchscreen with Audi’s latest MMI, the toggle control and that puny little display are long gone. The Touchscreen is fast, responsive and the updated software makes it intuitive to use. Though it doesn’t have the dual screen charisma of the A6 or the A8 this screen gets the job done just right.

The removal of the Toggle control made way for some nifty little cubby holes to keep your stuff in, the rest of the interior remains unchanged, goes by the German philosophy, why fix something which isn’t broken, the interior was the highlight of this generation and this one sits right up there. The Fit and Finish is top notch, as you would expect from Audi. The cabin is plush nicely appointed with high quality materials and bright upholstery and every touch being a touch of luxury. The feature list if exhausting as well some of them being the 3 zone climate control, full digital instrument cluster, memory seats for the driver, sunroof, wireless charging and then a sea of safety and driver aids. 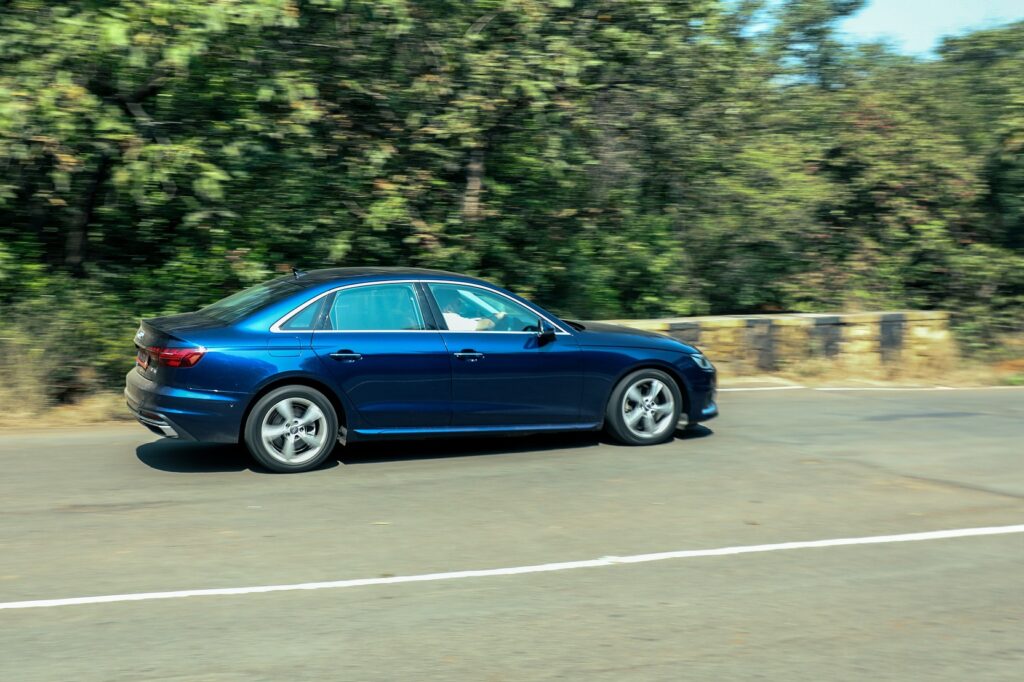 The big change is under the bonnet, the 2 Litre TFSI that does duty on the Skoda Superb and the Audi Q2 now powers the A4 as well churning out 190 bhp and 32.63 kgm of torque mated to the superb 7 speed DSG gearbox with paddle shifters. All these figures still have given the A4 characteristics of the perfect relaxed cruiser, and not an every angry driver centric car. And that is fine with executive sedans, you don’t want a growling engine after a long day at work, one would want a nice planted sedated yet surefooted ride. Push it hard and it would let out a raspy exhaust note, it isn’t a slouch either, on the corners it is confident and handles well too.

The A4 ride in a planted supple and surefooted manner, enough to take out battered roads with the suspension taking the beating and ironing out the bumps. Overall the A4 is an all-rounder; it looks prim and proper in the business suit avatar, boasts of a brilliant engine and a well-appointed cabin with all creature comforts that reek quality all for a price between Rs 42.34 – 46.67 lakh, ex-showroom.

If you’re looking for a luxury sedan that doesn’t break the bank, you’d do well to consider it. Sure it is toe to toe with the BMW 3 Series LWB, the Volvo S60 and the evergreen Mercedes C Class but the Audi does appeal to a large array of people who want a well- balanced car.

Kia Carens Review | 10 Things You Should Know About The Kia Carens
Hyundai i20 N Line Review | All You Need To Know | PitstopWeekly
2021 BMW M340i Review: Why I Think the M340i Will Make The Perfect Single Car Garage!
Tata Altroz iTurbo Malayalam Review | Video | PitstopWeekly
Spread the love
Categories
Reviews
Tagged
2020 Audi A3 Sportback Road Test2021 Audi A4 Reviewall-new audi a4Audi A4 40 TFSIAudi A4 Detailed ReviewAudi A4 PriceAudi A4 ReviewAudi A4 Road TestAudi A4 Used Car for SaleAudi A4 vs BMW 3 SeriesCar Reviewluxury cars