Ford Mustang GT is the perfect example of how a Grand Tourer should be!

The Ford Mustang, as you may be well aware, is an iconic pony car that is popular not just where it originated in the United States but elsewhere too. The American brand’s push to make its models globally appealing did not restrict itself to the volume segments, as the latest generation Mustang has been a grand success worldwide.

A mind blowing fact is the bestselling sports car in Germany, home of some dedicated speedsters, has recently been the Mustang. Last year, Ford took down its barriers and introduced the Mustang in India as the GT version came to the fore with a massive 5.0-litre V8 engine that makes 421hp of power and 530Nm of torque(Middle East Variant). We got a chance to take it for a spin around Dubai and came out astounded as we should be.

The Mustang embodies the true spirit of Ford with its signature styling evolved through the years. Ford has tasted phenomenal success in Europe with its Focus hot hatchback and the Mustang is not a typical pony car from the US as it blends the recipe of taking the world elites while adhering to the essential needs of global customers amidst sticking to its identity.

The Ford Mustang is the perfect example of how a Grand Tourer should be! Or what I didn’t expect from a Ford Mustang. From what I read and conceived, I pondered a fire-breathing track-bred machine but to my surprise it was rather settled when it has to be, but when you floor it, it’s a completely different animal altogether. 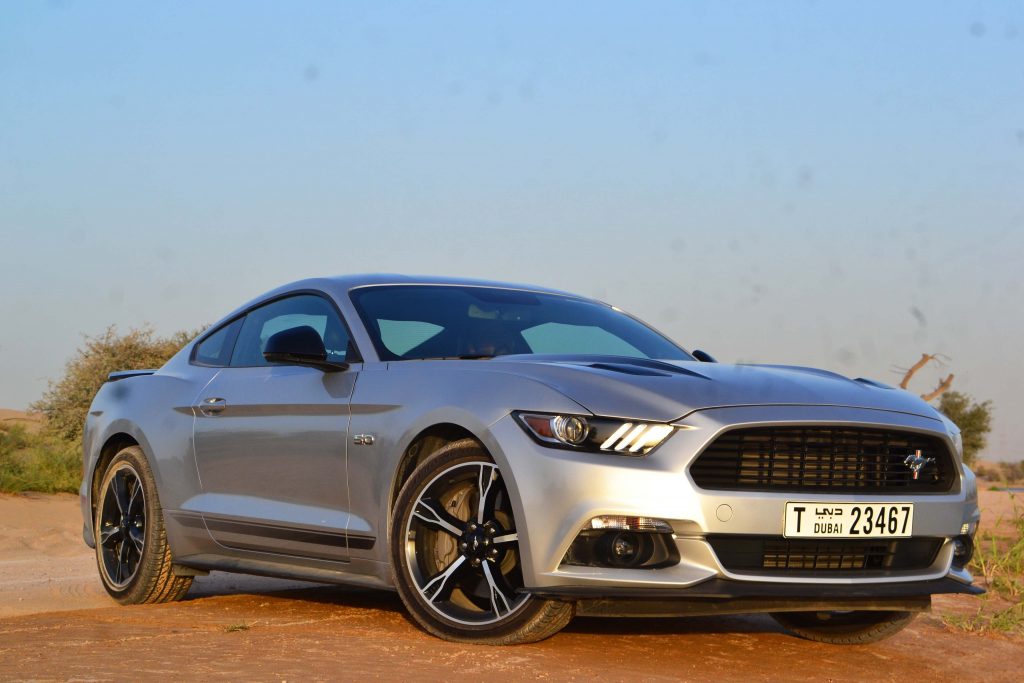 It has got years of heritage

First thing is first, it has got the heritage that will last for generations to come. You feel the purpose of the Mustang right from the word go, let alone the amazing design language honed over the decades.

You always admire the way it looks

It has a sculpted profile heavily influenced by the Evos concept showcased at the 2011 Frankfurt auto show up front with sharp styling and wedged edges. The rear features the iconic Vertical Bar tail lamps with LEDs. The interiors boast of an airplane inspired cockpit with increased body width and a larger cabin similar to the fabled Ford GT.

Overall, it’s a nice place to be with premium touches on the inside and a driver focused cockpit besides complementing the impeccable exterior.

It has really well cushioned seats that feature seat heaters ,providing convincing support during long drives as opposed to many other sports cars that render an aching back with stiffened suspension pursued in the name of making the car go faster.

Another significant factor that has to be addressed is the mileage of 7kpl, as it gives decent distance to the gallon unlike other rivalling performance-based sports cars.

The infotainment system is as good as it gets availing quality audio and all the necessary in-car functions. It has ambient lighting, eight airbags, dual-zone climate control, and heated and cooled leather seats offered as standard. The car also features Ford’s SYNC 2 connectivity system with voice commands and an 8.0-inch touchscreen. 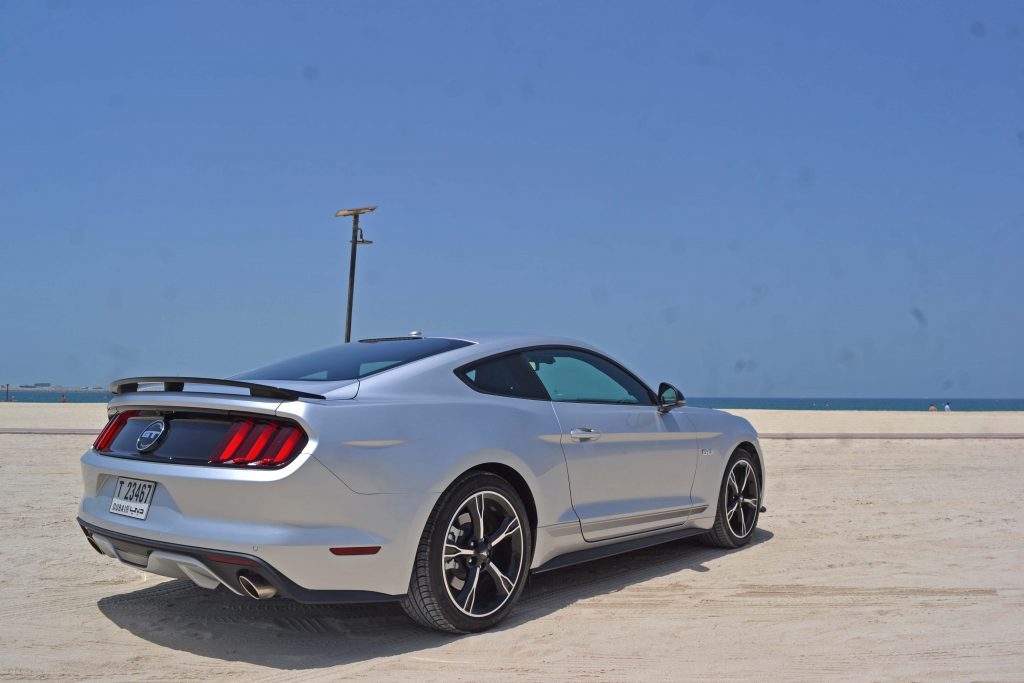 It can (only) carry your pets or kids at the back

However, the elephant in the room has to be addressed as you can only carry your toddler or pet in the back seat. Being a GT sports car, you can’t really complain about the lack of space in the rear though but at the end of the day, we had to nitpick something right? 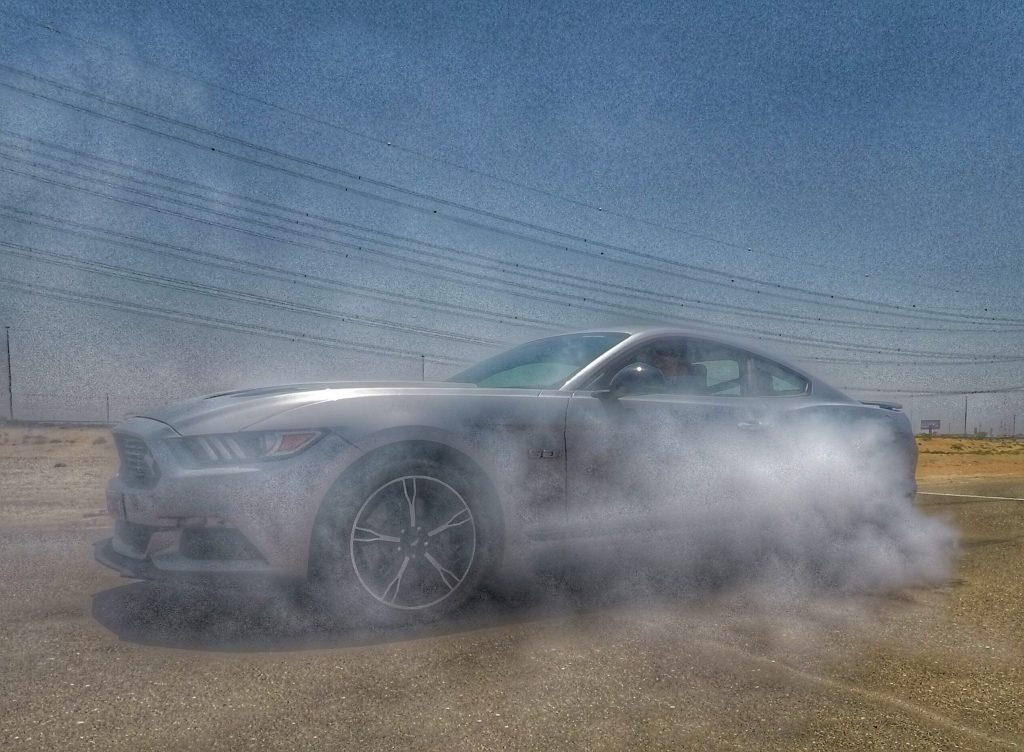 You can be a hooligan anytime

Coming to the drivability, it is as aggressive as it can be when you really put it in the go-fast scenario and you can bring out the hooligan in you at any time courtesy of the punchy raw power and of course the rear-wheel-drive configuration that keeps you lively on the road.  The Mustang has four selectable driving modes – Normal, Sport+, Track and Snow/Wet.

Oh! I forgot the line lock option which makes things all the more interesting. Ford calls it as ‘Track Apps’ which helps you to do a burnout without much fuss.

Well, it costs cheaper than rivals and is totally worth the money!

Ford Mustang is totally worth the money and we highly recommend it if you are pondering over buying it. It is cheaper than some other dedicated sports cars out there – and one that you can live with every day and not complain about.

I could find more Mustangs than the closely priced Audi TT in Dubai while driving around. People love the Mustang GT for the massive engine under the hood and the rear wheel adventure which makes you a happier person than driving an all-wheel drive car glued to the road! The Ford Mustang GT still remains to be an icon.

We are awaiting to drive the 2017 For Mustang GT!