For a lot of people, their first memory of their family’s first modern car ever since the onslaught of Maruti, has been the beloved 800. Over the years, the 800 was the preferred choice for the first-time car buyer. Then came in the Koreans with Hyundai and then a lot of others.

Only now, however, there’s a new KWID on the block which, in my honest opinion, would change the ownership aspect of the first car. The Renault Kwid has a lot going for itself. To start with it, has the looks; the kwid has that baby SUV-ish stance that can intimidate the rivals, with a lot of best-in-class features. 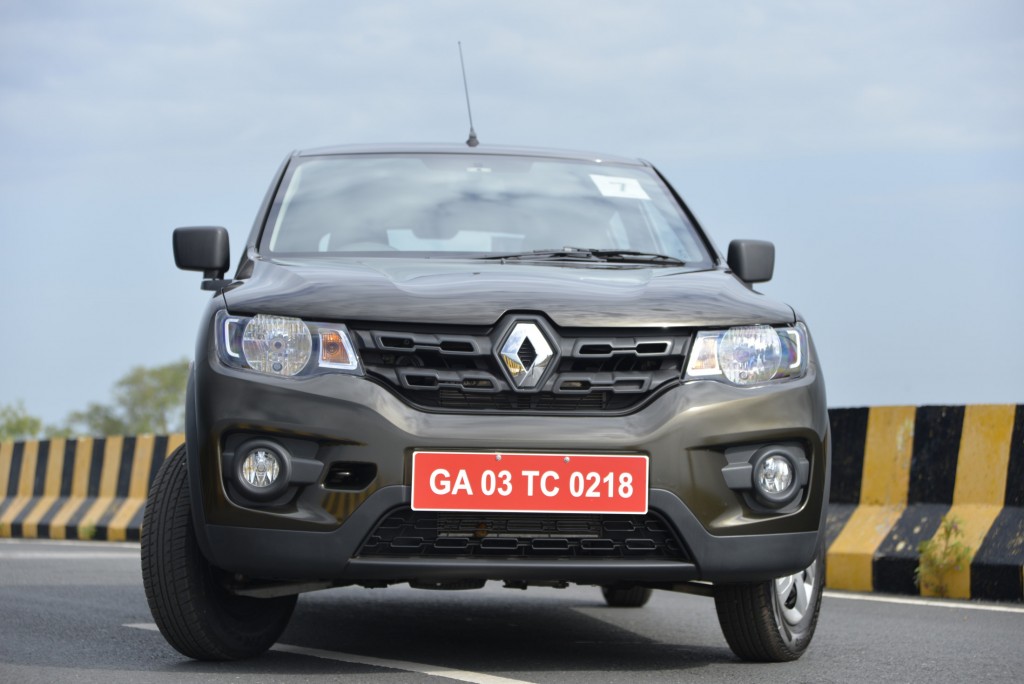 The front-end of the Kwid houses the large muscular grille, and the headlamps are nicely contoured and look neat, along with the heavily contoured bumper which has the air-dam and is flanked with fog-lamps. At 180mm the Kwid stands tall and it is more prominent with the side profile. The SUV-inspired looks continue with the beefed up fenders and the nicely done shoulder line running up all the way through the flared wheel arches in the front. The side indicators are housed inside the cladding. Shod with the standard 155/80 tires, wrapped around 13-inch steel rims, the wheel wells beg for more. 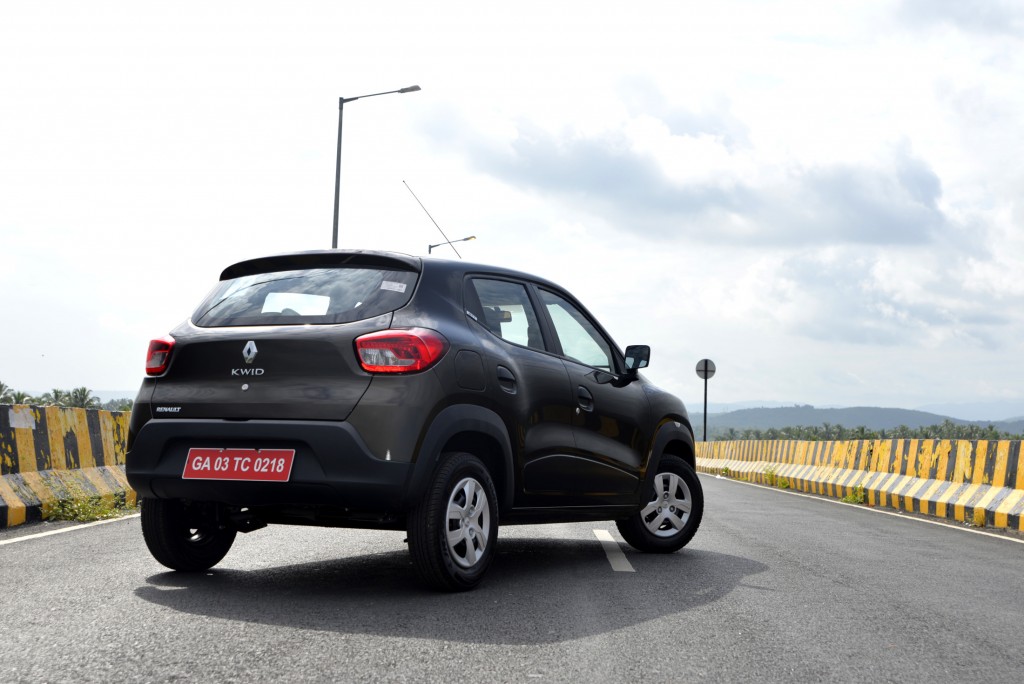 The rear end is typically European with a de-cluttered, simple design. The spoiler and clean tail lamp design add to the appeal, along with the black bumper cladding, which is SUV-inspired. Renault has announced six different kinds of customization packages for the Kwid. The customization ranged from exterior embellishments and fitments to interior accessories for most Indian buyers. Buyers can choose from 5 different colors for the Kwid. 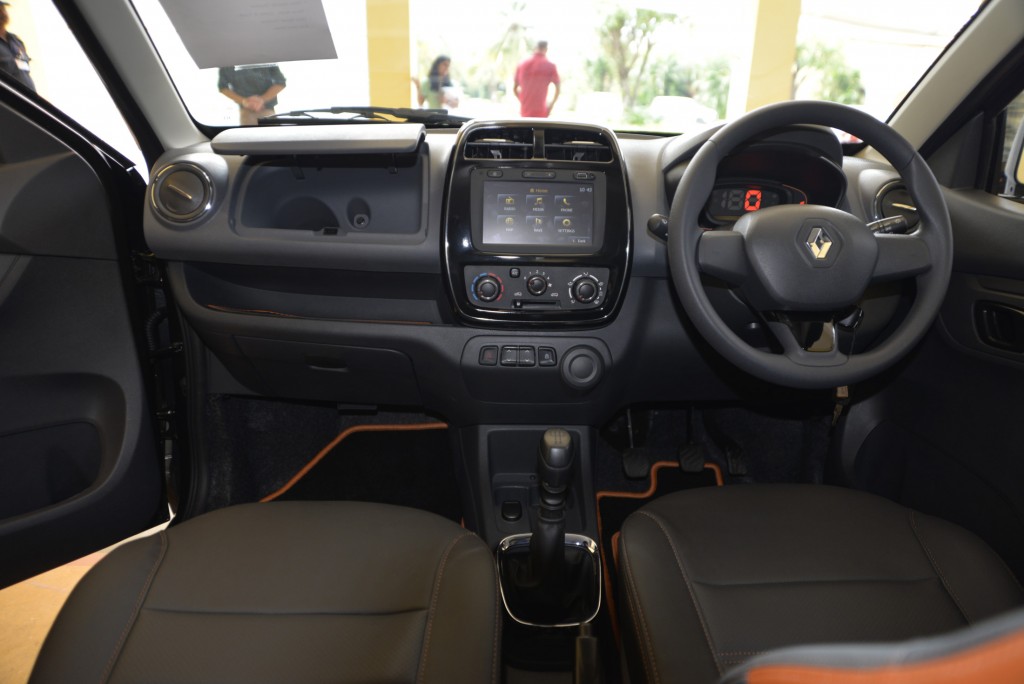 The interiors have a sense of roominess, thanks to the availability of space within the cabin which is a nice place to be in. It feels roomy, adequate and does not feel cheap or cost effective. The piano black finished center with chrome accents looks premium, and houses the 7-inch Touch Screen Media Nav System. For a budget car, the system offers Bluetooth, iPhone and smart phone connectivity, navigation, USB charging, audio playback via Aux-in, pen drive and phone.

Cubbyholes are aplenty in the Kwid, and the cleaner dashboard design aids storage space, with three glove boxes summing up to around 22litres of space. The steering wheel is nicely contoured and trimmed in leather. Beyond the steering wheel, you will find a first-in-class full digital instrument cluster, which houses a large readout of speed, a gear shift indicator and a trip computer. Front power window switches, along with a central locking button are housed in the center console below the Media Nav. 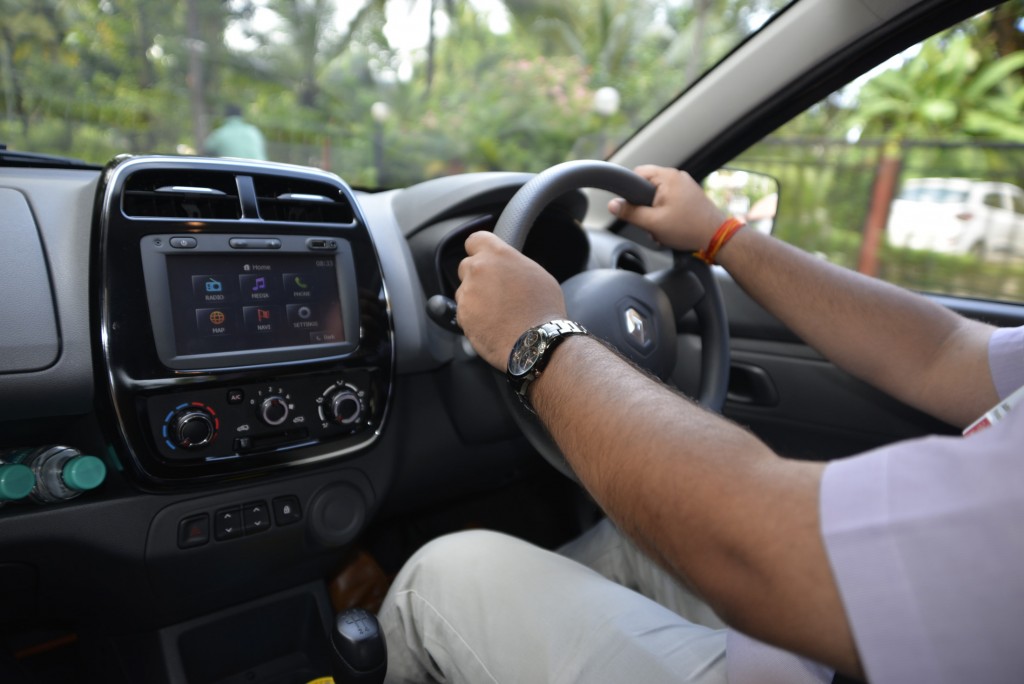 The seats are basic but offer decent support. The rear has a bench seat which is supportive and spacious, though seating three at the back would be a squeeze. The headroom is adequate. The Kwid can swallow the shopping bags in its boot, which is a class-leading 300 litres . The rear seats can be folded to further increase the space to a whopping 1,115 litres, enough to house your mother-in-law’s luggage.

The Renault Kwid is powered by an all-new 799cc, 3 pot BR-8, DOHC engine. The engine has been developed by Renault-Nissan’s technical centre at Chennai, and develops 54 PS at 5,678 rpm and 72 Nm torque at 4,386 rpm; making it the most powerful vehicle in its class.

The Kwid offers 25.17 kmpl, making it the country’s most fuel efficient petrol car. NVH levels are decent with only minor sounds and hums making their way into the cabin. The engine note makes its presence felt in the cabin though, but it has been contained by a fair margin. 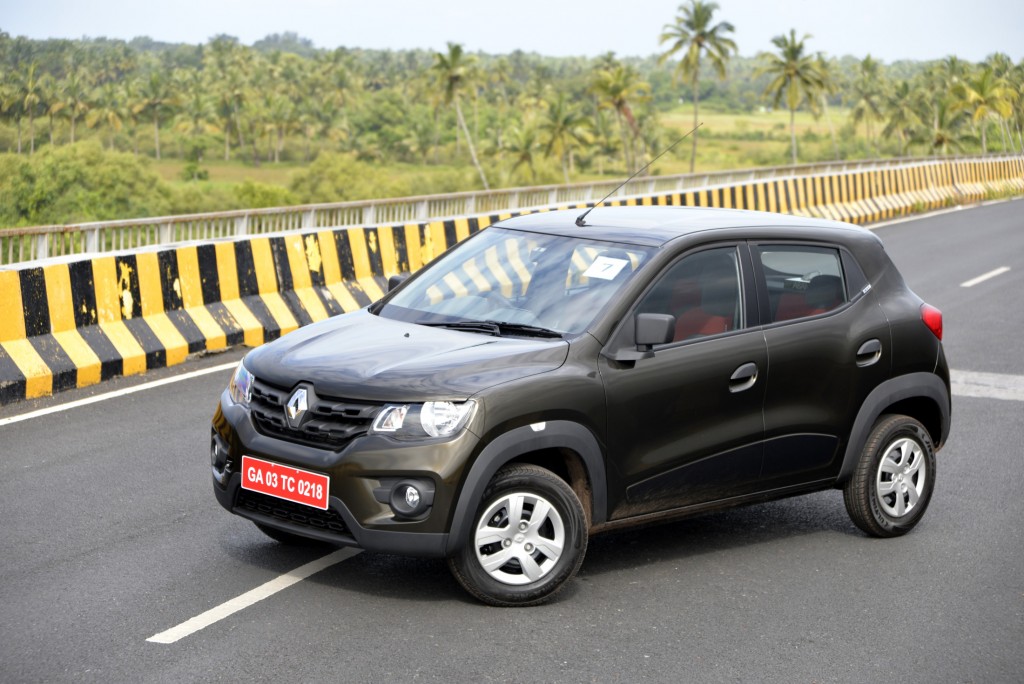 The Kwid is very light, weighing at only 660 Kg. More use of plastic and a lot of weight saving measures have been taken to ensure it remains a peppy ride around town. With all the weight saving, the safety is still very intact and Renault says it meets all safety regulations in India.

The engine is eager to be revved and though in initial gears, it tends to judder, at high speeds things get smoother. The car doesn’t show reluctance in any gear, and can comfortably cruise around. The Kwid has a peppy mid-range which lets you around in a lot of momentum. Floor the throttle, and the motor in traffic sprints are effortless but it runs out of steam on inclines, and one has to constantly work on the gears while crawling up. 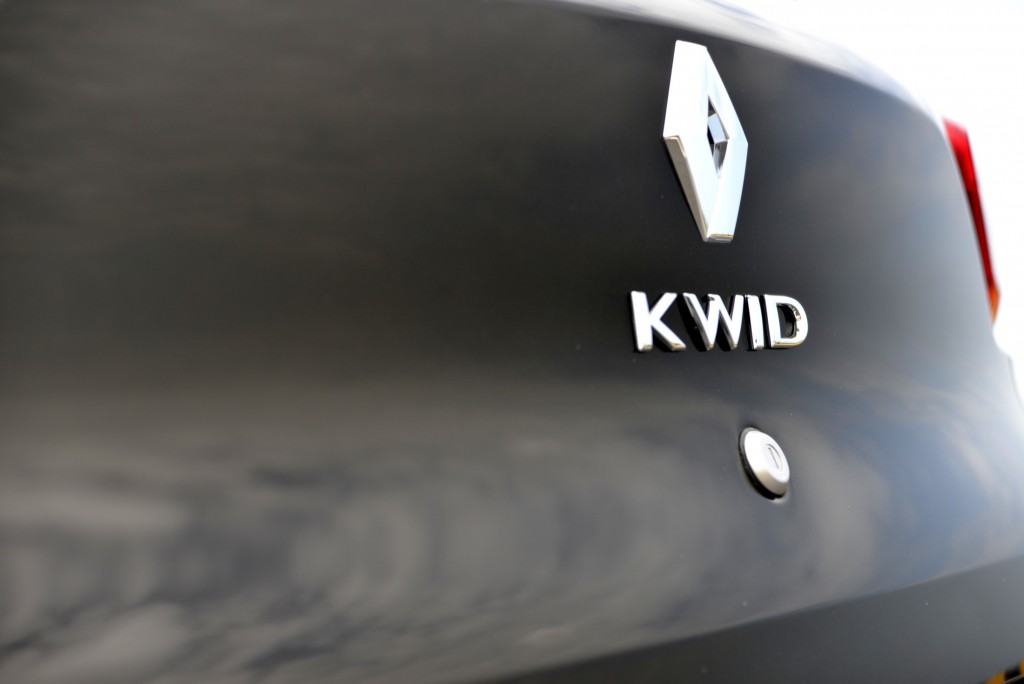 The Kwid’s ride quality is supple, potholes and irregular surfaces are tackled by a MacPherson setup with lower transverse links up front and a twist beam setup with coil springs at the back. True to its SUV design the car even rides like one.

The brakes are just about satisfactory, with discs up front and drums at the back. Under heavy braking, it just lacks the bite and isn’t really confidence inspiring; ABS isn’t even an option, while driver air-bag is optional even on the top-end model. 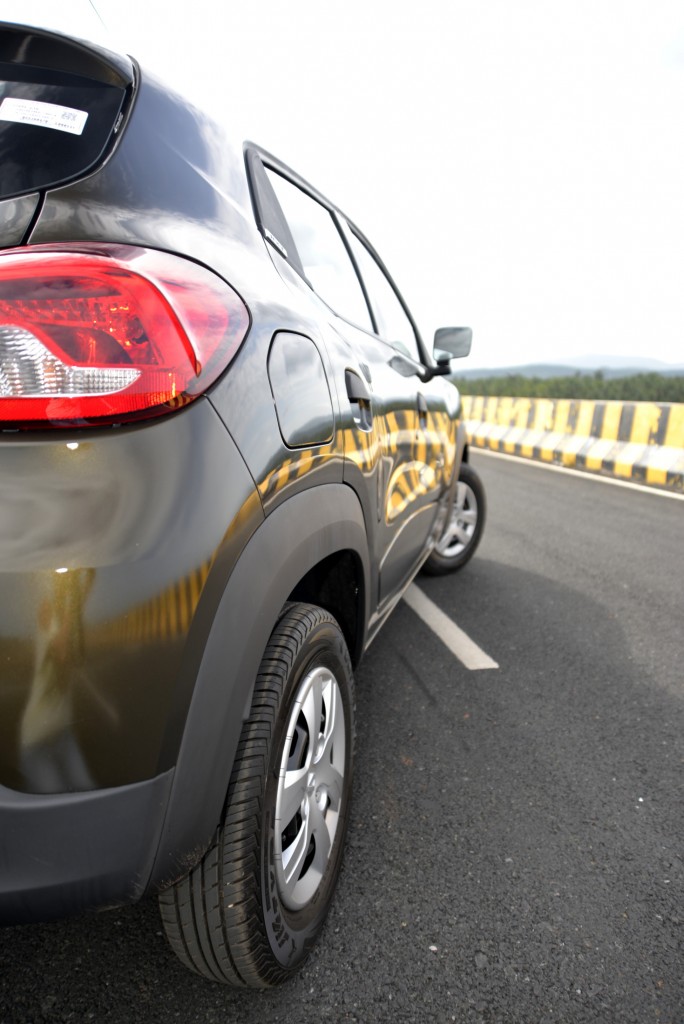 Renault calls it the ‘Game Changer’, and in many ways, it is one. With a sticker price of INR 3-4 lakhs, the Kwid will be the most value for money car one can buy, because let’s be honest, Renault’s commitment to lower cost of ownership, and with a car that looks like this, along with the long list of best-in-class everything, it sure seems like a winner.

Renault also promises the lowest cost of maintenance and spares, a 2 year/50,000 km warranty, along with free roadside assistance for 2 years. This is where you start to think of the compromises you will have to make: a vague steering wheel and brakes, and probably the gearbox if I’m nitpicking. Deal breakers? I think not. Knowing that Renault is up against players who have long enjoyed the market share for decades and manufacturers who have solely dominated this segment, Renault has rolled up its sleeves and has planned to aggressively market this product. And with 205 showrooms under its wings, I think Renault is up for a big fight. Will they win it? Time and sales figures will tell.