Affalterbach boffins are known to transform regular Mercs into monsters. They just don’t mix power to it; they give life to each model. There is something special about an AMG while compared to other brands. Their cars are brutal and we can feel it. We recently tested the all-new Mercedes Benz C63S AMG in Dubai. And oh boy, what a blast it was! To cut a long story short, the C63S AMG is the best car I’ve ever driven! The following week, I drove an Aston Martin Vantage, and I felt the C63S is a lot livelier car than the Aston in every aspect with a much lower price tag. 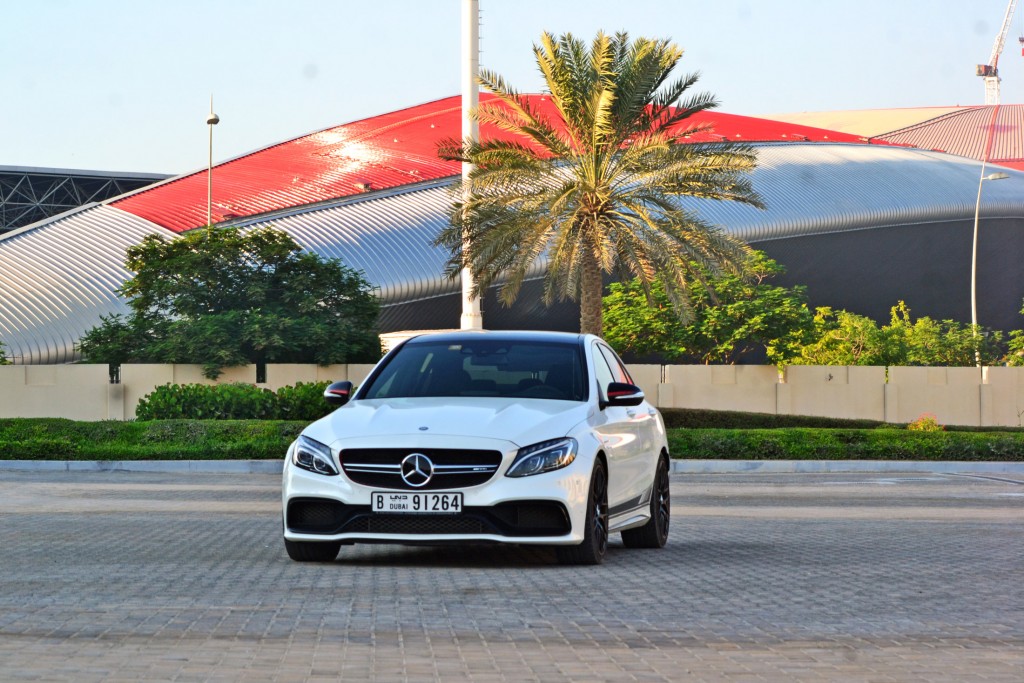 The last C63 was a beautiful but brutal thing. It would just as soon deafen nearby wildlife, orphan your children, and turn the sky black, as it would embarrass a BMW M3 on the local raceway. While it was a mental motoring machine, and downright scary in many situations, it was also captivating. Mercedes is still calling it a C63 even though the V-8 engine has been downsized from the epic, naturally aspirated 6.2 of yore to a twin-turbo 4.0-liter unit. (This engine will also power a new C63 coupe and Euro-only wagon, as well as perhaps a convertible.) Yet, in feel and sound, the 4.0-litre does a strong impression of the old 6.2. The new engine shares much with the M178 unit in the AMG GT, and through clever tuning of turbocharger boost, ignition, and fuel mapping, the blown V-8 ably mimics the old engine’s big-displacement response and linear rush of acceleration. A series of valves in the tuned exhaust open and close to play the big V-8 symphony we loved from the old C63, and we didn’t detect any whistle from the two turbos that snuggle together in the valley of the 90-degree V-8. This is good, because whistling doesn’t suggest anger. But the rifle-like reports you hear from the quad pipes on full-throttle upshifts and under engine braking – ah, now that’s anger. 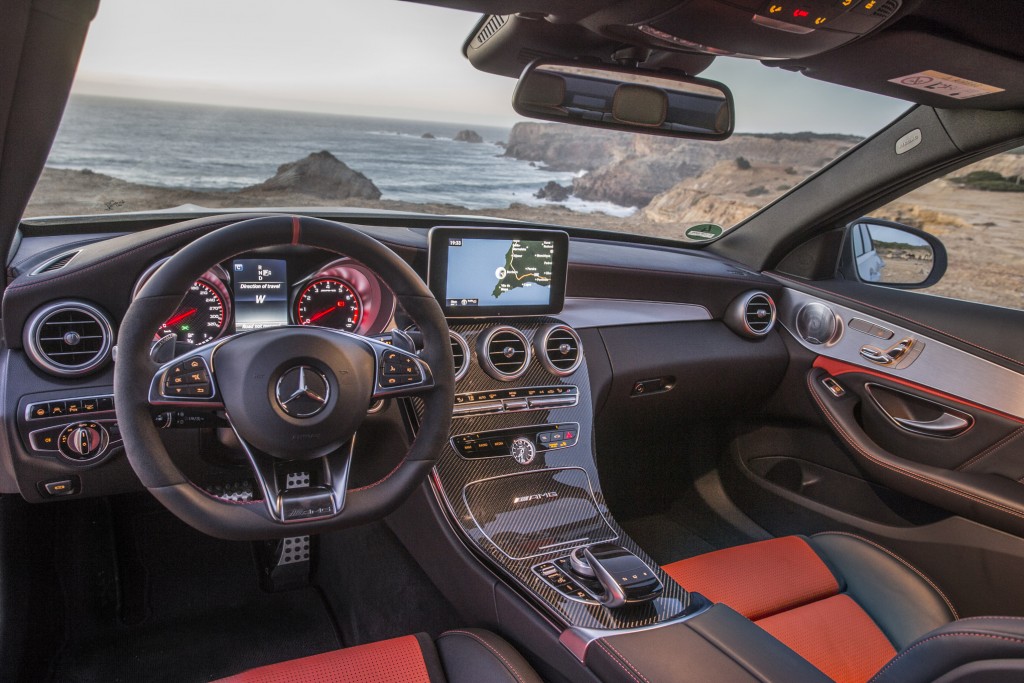 In terms of styling, the designers haven’t played with the lines too much, and have kept the changes subtle. Carbon fibre too hasn’t been used generously on this one. But then, the C-Class is already a good-looking car that doesn’t need too much work on its looks, anyway. On the inside too, Merc offers a few options with the sort of upholstery that you’ll like and the materials you fancy on the dashboard – carbon fibre or piano black finish. 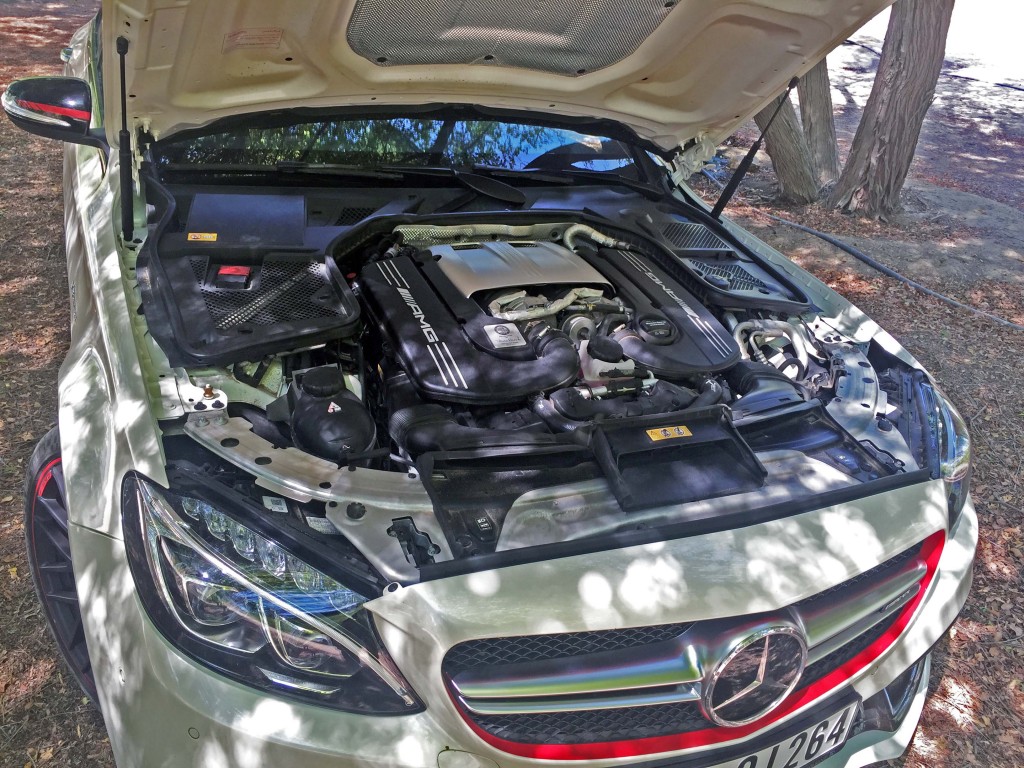 Under the hood of this monster is the bonkers 4-litre V8 – the same one that the AMG GT gets. It generates a massive 510bhp and 700Nm. The regular C63 produces 476 horses and 650Nm. The C63S generates huge amounts of power and torque in a linear fashion and has enough grunt to bring a smile on your face and can scare the wits out of your co-passengers every time you tap your right foot. In fact, it churns out peak torque right from 1750rpm, right up to 4000rpm. Our car had an optional sports exhaust system; it makes the V8 sound even more sinister. 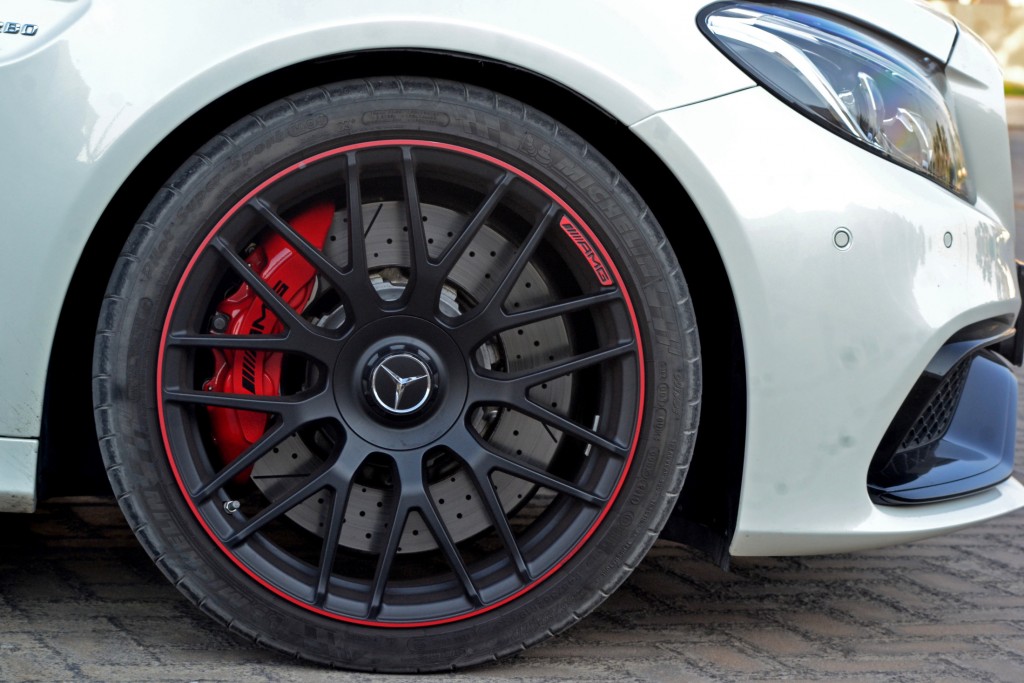 The 2015 Mercedes-AMG C63 comes in two flavours: C63 and C63 S-Model. Both are powered by the new AMG 4.0-litre twin-turbo V8 and mated to AMG’s SPEEDSHIFT MCT seven-speed sport transmission, which routes power to the rear wheels through the mechanical locking rear differential. Each engine is hand-built by a single worker, and an unusual “inside hot V” design means the turbos are mounted inside the V of the engine, rather than on the outside. This and other innovations mean the C63 and C63 S are both faster and more efficient – consuming 32 percent less fuel — than their predecessors’ 6.3-litre naturally aspirated V8. 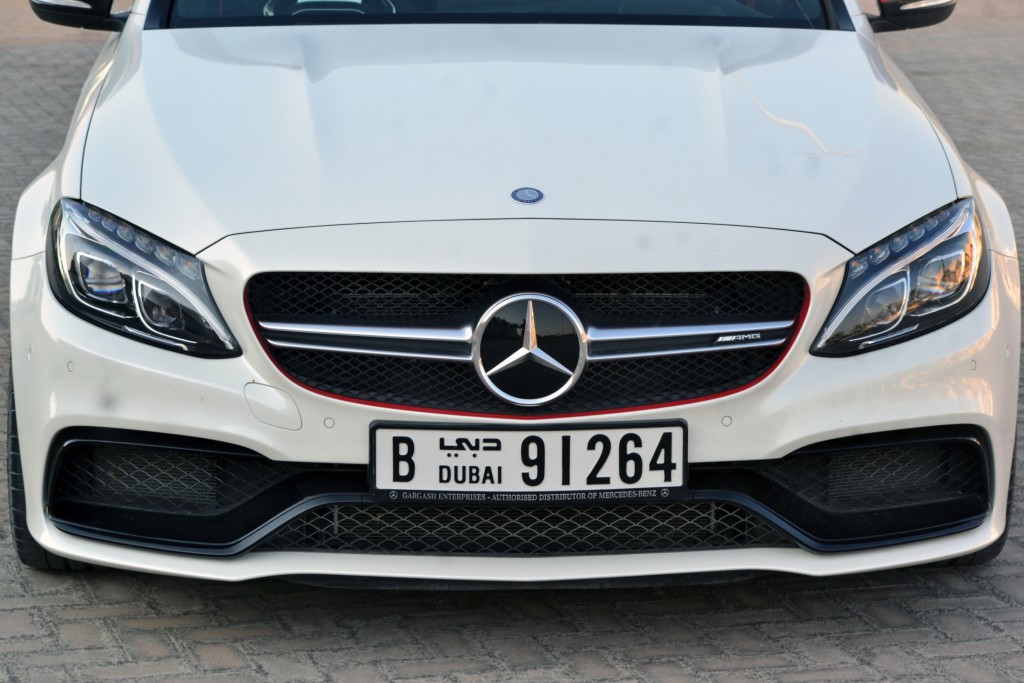 Of all the remarkable things about new C63, of which there are many, perhaps the standout is the sensation of lightness. It seemed there would be no way to escape this sensation of remarkable heft, as cars are literally getting heavier and heavier with each iteration. Amazingly, though, without carving out essentials like airbags, navigation, or sound deadening, AMG has created a high-performance, V8-powered super sedan that feels remarkably light. 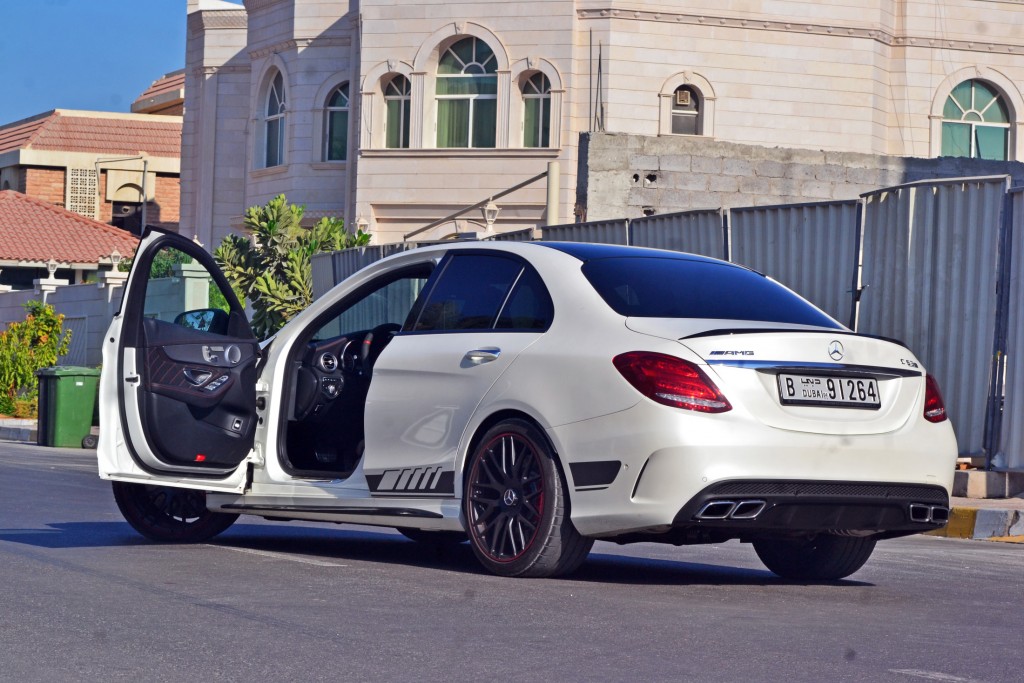 And that goes for more than just its cornering capabilities. Every part of the car has a feeling of airy effortlessness. The electronic steering, for example, is lighter than in many cars in the category, but far more responsive and nimble. The driver doesn’t need to mash the brakes or the throttle either to get an immediate response. While your passenger is digging grooves into the dashboard with their fingernails as you fling the AMG through the bends, you feel perfectly in control. This is something that both – my driving partner and I experienced. From the passenger seat, it felt like the C63 could go off the road at any second, at full-tilt. From behind the wheel, though, the driver never breaks a sweat while testing the boundaries of friction and grip. 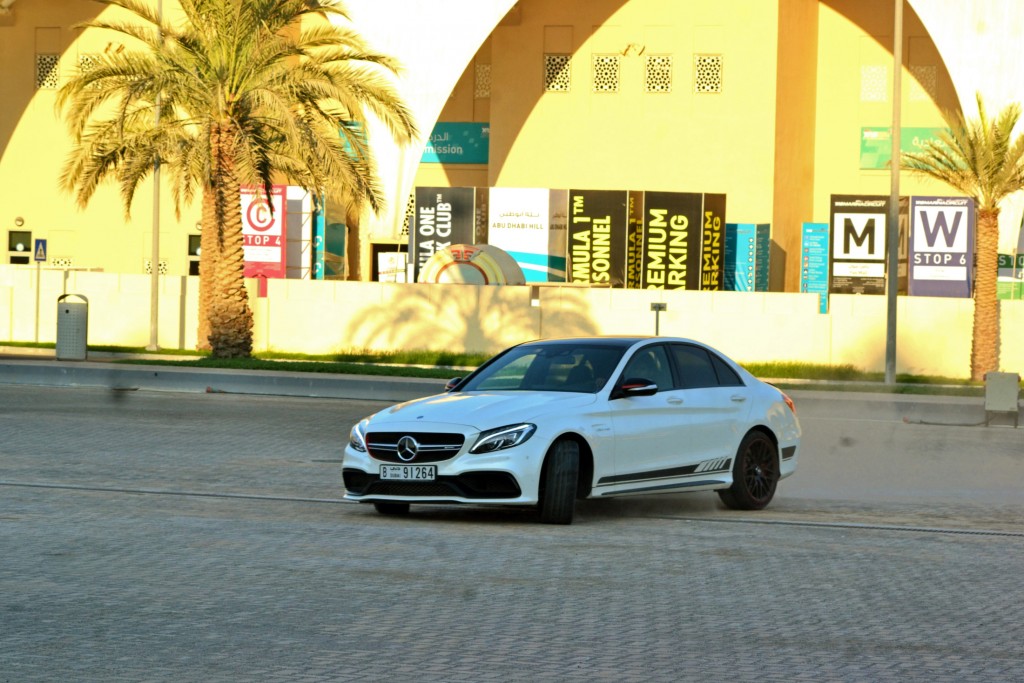 The C63 is exclusively rear-wheel-drive. We applaud that decision. It makes for a more interesting car. There are also these reasons: Despite the limited-slip differential—mechanical in the base C63 and electronically controlled in the S-model—it takes patience and skill to apply the right amount of power on corner exit, it’s harder but more gratifying to launch from a stop, you can do burnouts, and it means the C63 won’t hesitate, especially with those of the type who completely shut off the two-stage stability control. Don’t have the talent? You will feel the wrath of a sideways C63.

Other fun stuff includes a Race Start function (left-foot brake in either Sport+ or Race, pull both paddles, acknowledge by pulling the right hand paddle, floor the accelerator and lift brake), which gives picture-perfect starts every time. 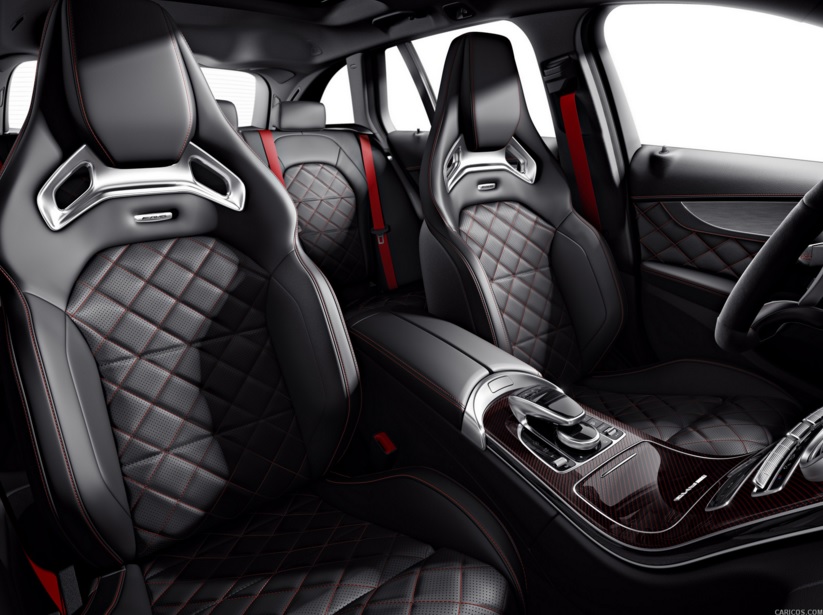 Heavily bolstered AMG sport seats are optional and keep sliding to a minimum. Contrasting stitching, piano-black trim, and unique gauge faces with carbon-fiber accents are the major AMG-specific touches inside. Rear-seat space remains tight despite a three-inch wheelbase stretch over the last C-class. 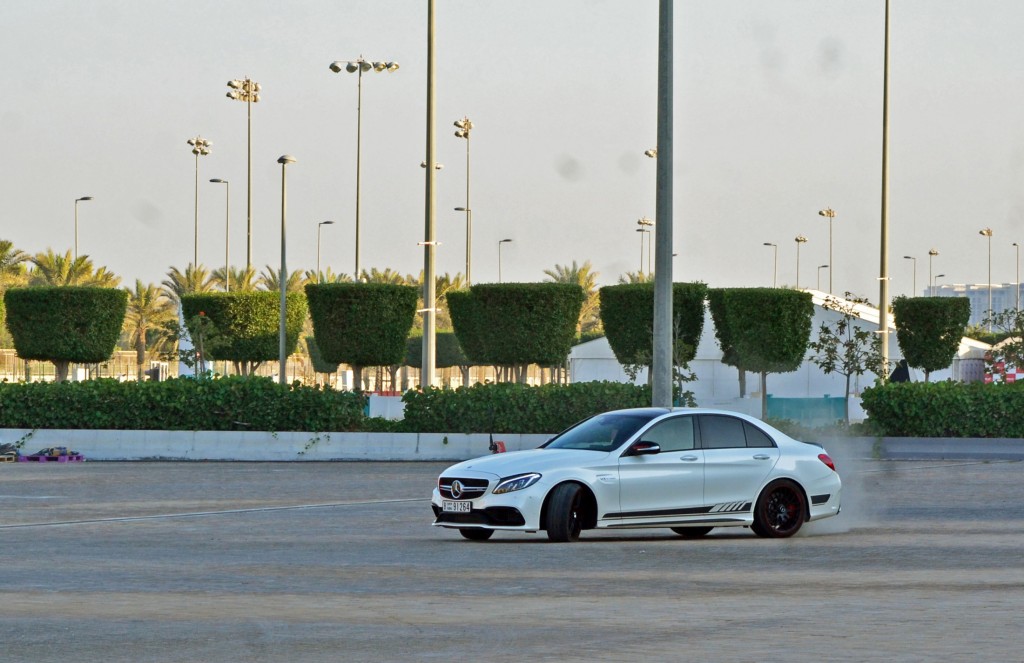 The angrier the car, the better it is!

The C63S AMG is more like a tortured soul. And we mean that in a good way. Overall, the C63 is the best thing you could get at a price of Rs.1.2 crore in India, while the UAE has it priced at AED 350,211. The C63S is going to give the M3 a real run for its money. The engine is powerful, and the way it delivers power is absolutely mind-bending. The angrier the car, the better it is!