Harley Davidson India is finding their way to make their products cheaper. HD products are never cheaper, but those who own a Harley abroad needn’t think that the Indian CKD (Completely Knocked Down) line-up is costlier than what they have met abroad. Yes, they were costlier when Harley Davidson bikes were imported in the beginning, and now they’ve refreshed their CKD line up after the custom duty hike in the budget. However, there’s a reasonable decrease in all the HD bikes after they started assembling their bikes in India. We visited Harley Davidson’s largest showroom in India – Harley Davidson Cochin, to check out the Fatboy and Superlow. The showroom is loaded with all kinds of Harley products like t-shirts, jackets, helmets and a lot more. For a moment, you feel like you’ve landed in a Levis showroom. But soon, those Harleys parked inside will grab your mind. 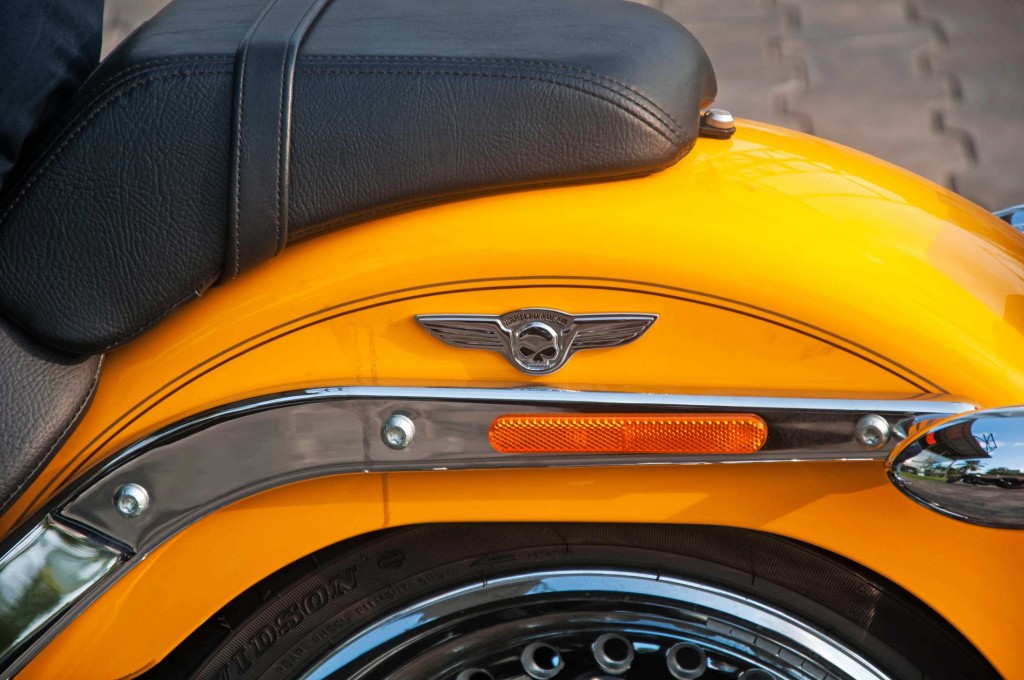 I was wrapped in my leather jacket, along with my new rugged looking shoes which I shopped for the Fatboy’s ride, in specific. Everyone says it’s a culture. I have heard this from everyone – from actor Abbas, to the HOG at Coimbatore. So we thought let’s try mingling with their culture and see how good it is. If you are about to ride a Harley, you should wear at least a jacket and a pair of jeans. That’s the style Harley owners follow up with. 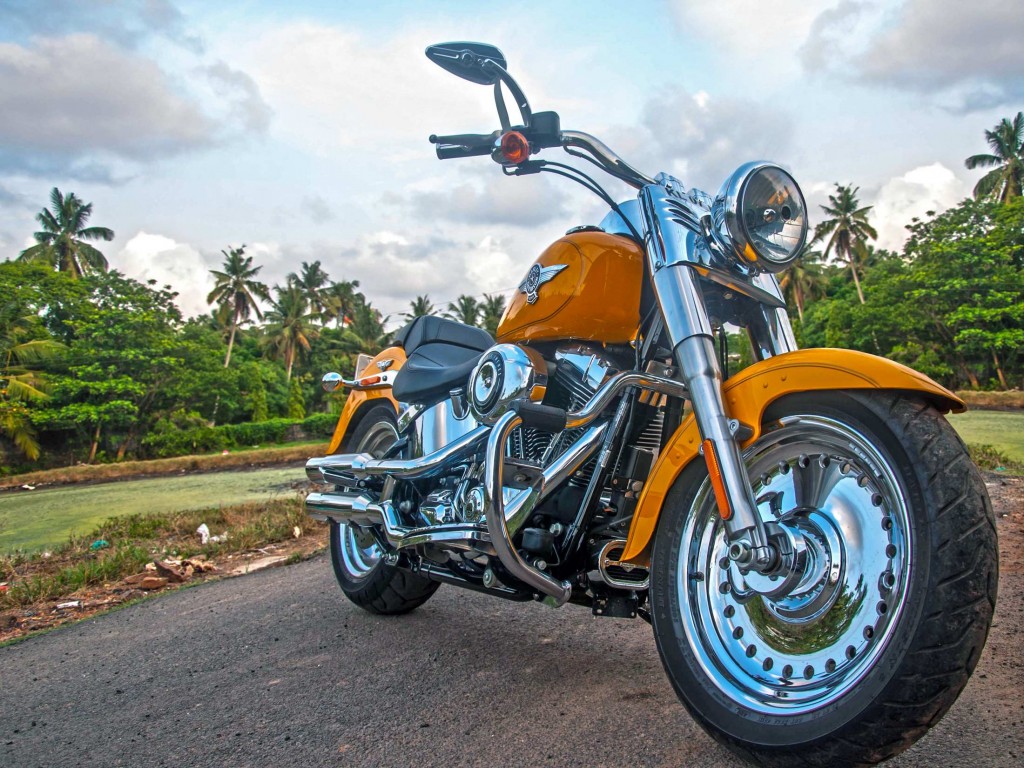 Why is it called ‘Fatboy’? Oh God, it’s so heavy. I laid my hands, for the first time on a Fatboy, and I was baffled as to how Arnold rode it around America, doing some crazy stunts in the movie – ‘Terminator’, and even burnt some rubber with this huge machine. Maybe getting used to the bike will make you feel like you’ve got a hold of it. Saran on the Superlow, was laughing at me after having seen me struggle to get the bike out of the parking lot. Yes, with 330kgs of kerb weight, the Fatboy is a real deal for a newbie. The Fatboy is a tough metal ride for personalities like Arnold. Its kerb weight will get you thinking a whole day as to how to handle the beast. Perhaps it’s 9.2% heavier than all the average cruiser motorcycles. I was very fond of the Fatboy from the time I noticed this bike in the ‘Terminator’. I should mention that my fondness reduced when the 330kgs of kerb weight troubled me. 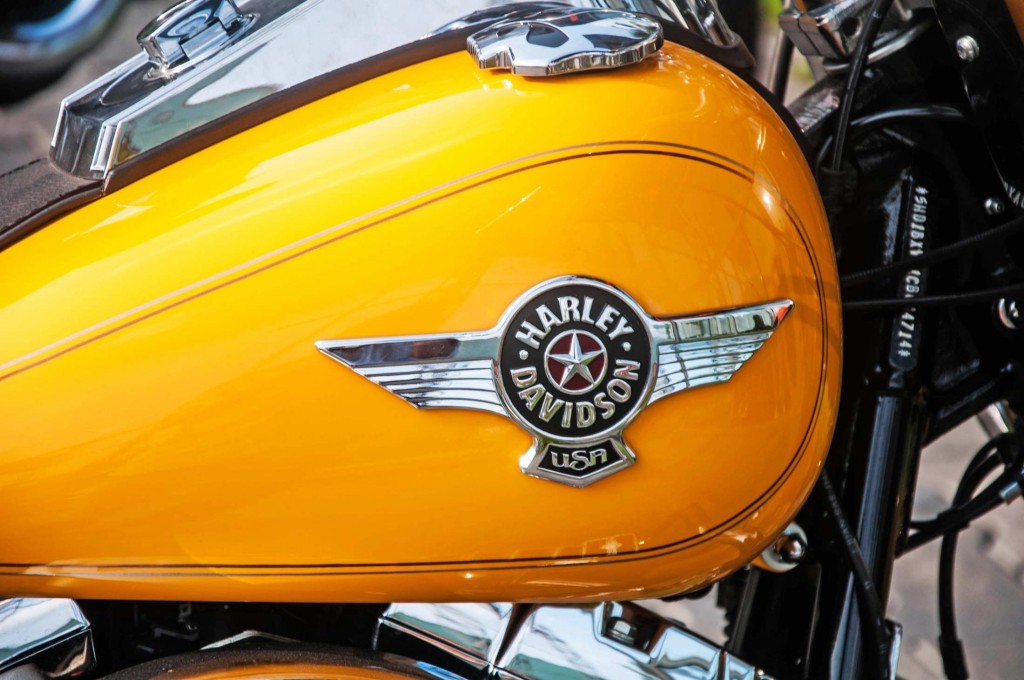 The first thing you will notice is the fuel tank loaded with an instrument cluster, with a huge metal stripe along with the ignition button and the speedo metre. Once you get on, it’s the wide tyres (the front measuring 140/75R17, and the rear size at 200/55R17) make the bike feel stable on the floor. Igniting the engine will start a simple, mild sound which can be defined as a characteristic Harley sound. I would say that the Fatboy has not got that grunting sound which a few other subordinates have. Without any customization the, Iron 883, Forty Eight and the Superlow sound amazing. 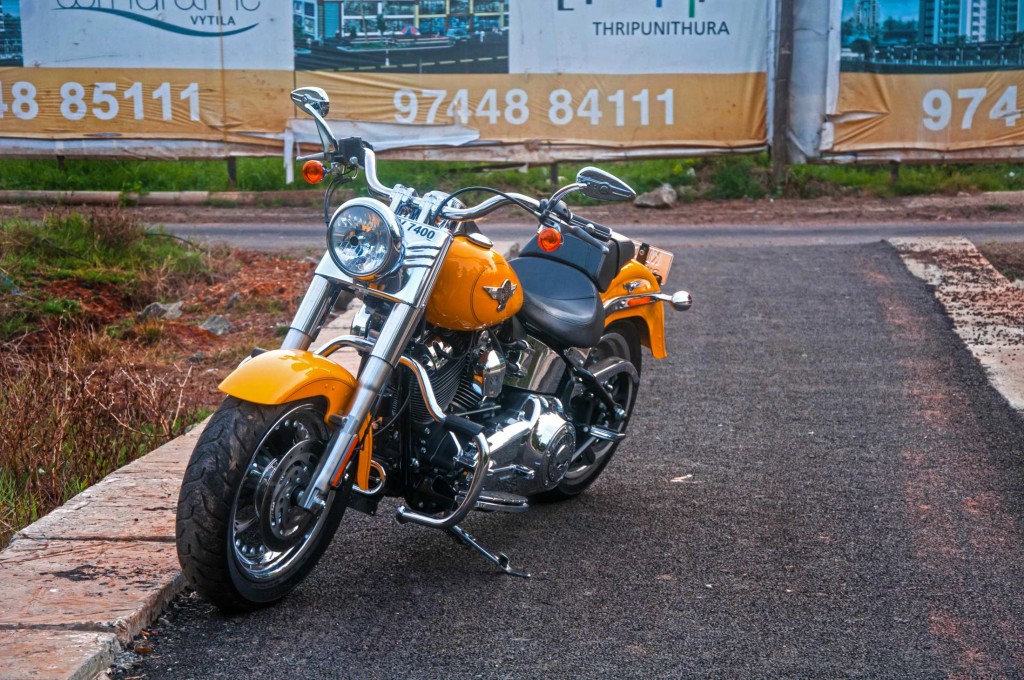 Shift it to the first gear, and make sure that you don’t open the throttle completely in the first gear. And if you do keep the handle bar straight ahead, then you may fall off the bike due to the wind force. And if you do it on a curve, then the rear wheel spins out of track, and again, you may lose control. After trying to ‘full-throttle’ the Fatboy, again I wonder as to how Arnold did the crazy jump with this bike. And once you shift to second gear, and the beast starts moving, you’ll feel a lot more confident. On the second gear, you may try full-throttling if you’re daring enough and capable. 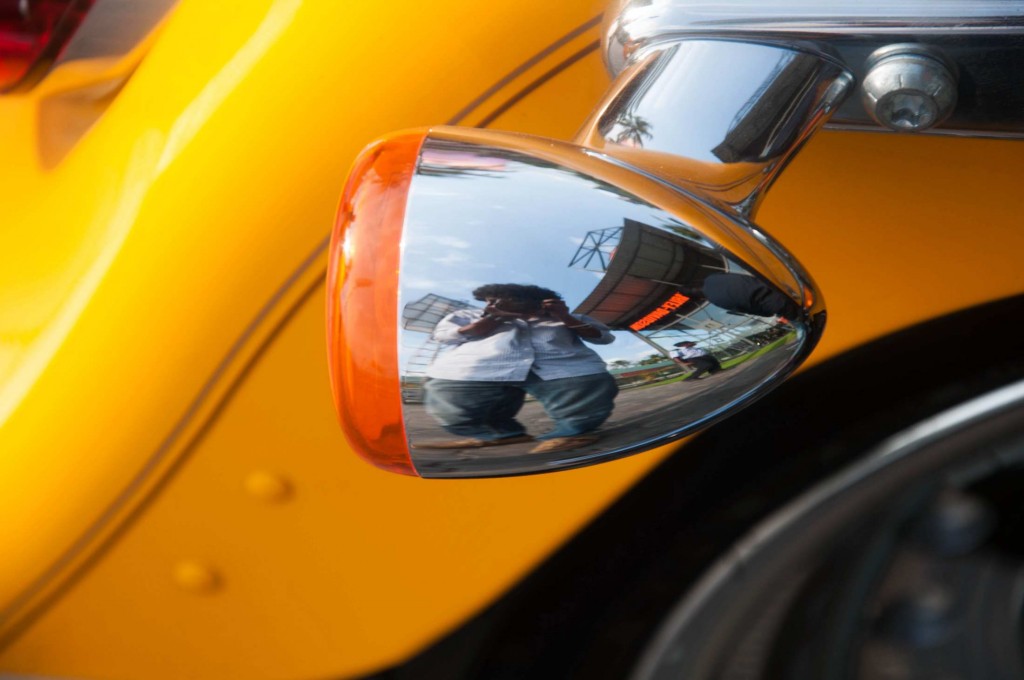 Powered by a Twin-Cam, 1,584-cc engine that produces a massive torque figure of 132Nm@3250rpm, it’s definitely worth it. And Harley doesn’t publish the engine power figures. You’re offered with a 6 -speed gear box, which is really hard to use and every time you shift a gear, a hard clunk sound is emitted from the gearbox. The foot rest is not a pedal; it’s a kind of large plate where you can rest your foot. And each time you shift a gear, you need to take it off from the foot plate.

This machine irons out every road undulation, thanks to the beefy-sized telescopic fork front suspension and horizontally-mounted hydraulic shocks tucked away at the rear. Whatever rough patches you travel through, the Harley’s planted handling will give you enough confidence to ride through. Riding this beast on a highway is a journey no biker would want to miss. I would badge that journey as ‘EPIC’.

We got our hands on the yellow Fatboy, which we think, is a bit too jarring. Some enthusiasts choose the matt black Fatboy which comes as variant. On the bike we rode, you can see chrome and more chrome on the engine block and on the alloys too. With the chrome finish, it gives it a real cruiser look. In the matt black variant, there wouldn’t be any chrome or anything that shines. Even the engine block gets painted in matt black.

All in all, the Fatboy is one among the best cruisers in the world. I would say it’s a “handle with care” cruiser because of its kerb weight. But like any other cruiser, once it sets moving, you can handle the bike with ease. The Fatboy can hit a top speed of 170kph, and I’m pretty sure that you’re never going to cruise at that speed on our Indian roads. On highways, I would say riding this bike will be the most unforgettable moment in your life. Cruising at three figure speeds is easy without there being much vibration. Perhaps cruisers are born for cruising at three-figured speeds and the Fatboy is very good at that. At the same time, manoeuvering the Fat Boy in traffic is a task.

But we personally feel that any Harley should be customized after you get it delivered. Because the Fatboy is a cruiser that every biker would dream off. But its inbuilt muffler wouldn’t wake up your neighbourhood. If you want to do something like that, then you’ve got to bolt-on a Screaming Eagle exhaust, along with better touring seats that’ll allow you to relax and ride the bike leisurely. It costs almost Rs. 15lakhs. But hey, at that price, you get to live Arnold Schwarzenegger’s dream – just like in his movie.