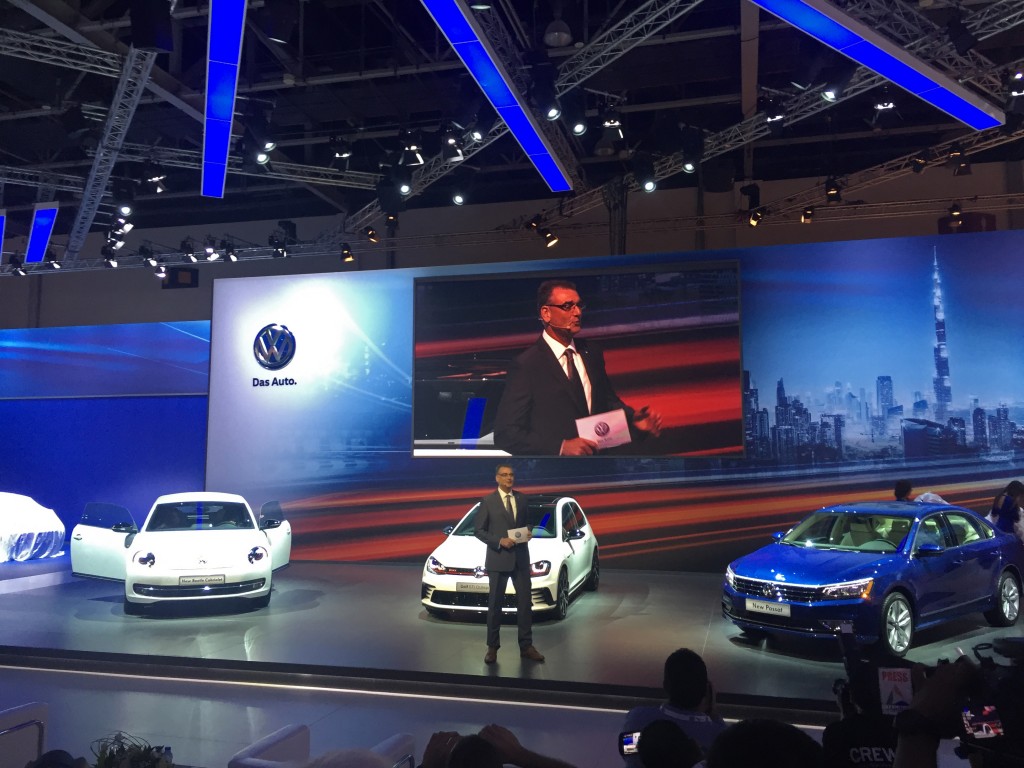 Thomas Milz, Managing Director, Volkswagen Middle East said, “At this year’s show, we present a car for everyone. The progressive anniversary edition of the GTI – the Golf GTI Clubsport – will arrive in the Middle East next year, marking the 40th anniversary of the sporty hot hatch. The GTI Clubsport is the most powerful production GTI ever, and features a more powerful engine, with an extensive exterior and interior redesign.”

“The Passat is one of our best-selling models in the region, and the latest version of the family-friendly sedan features a winning combination of design, innovation, technology and improved safety features. Finally, we debuted the Beetle Cabriolet – a car combining fun, comfort and a dynamic drive while retaining the classic shape and personality of the iconic Beetle.”

At the beginning of next year, the icon of the sporty compact class – the Golf GTI – is celebrating its 40th anniversary. The anniversary edition of the Golf GTI, the Golf GTI Clubsport will have more power, as well as revisions to the design, equipment and aerodynamic fine-tuning – featuring a high power output and significantly improved down force. Stylistically based on the original GTI, the anniversary model has relocated the classic black stripe, usually situated between the front and rear wheel arches, to the side of the model, and has accentuated “Clubsport” in the latest version, among other design elements to pay tribute to GTI history.

On the exterior, slimmer headlights, a more substantial four-bar grille, and the muscular, domed hood all work together to give the Passat a wider, more planted stance in the front. The inside, on the other hand, showcases an extensively upgraded, sophisticated look and feel including a new steering wheel and column stalk design, two-tone décor panels, and refined chrome and piano black trim. The latest model will be available in four stylish configurations – S, SE, SEL and Sport.

A Volkswagen Cabriolet made its show debut ahead of its arrival in the region this December. The Beetle Cabriolet exhibits an elongated take on the classic Beetle shape with an automated soft-top hood, which can be closed in just 9.5 seconds, with minimal noise and while the vehicle is moving up to 50 km/h.

The new Beetle Cabriolet boasts a classic Fender sound system – with 400 watts of pure power, a digital 10-channel amplifier, nine speakers and a subwoofer to produce the exclusive Fender sound – and ample space, with the four-seater model offering a boot capacity of an impressive 225 liters. The Beetle Cabriolet will be available in three trim levels – SE, SEL and Exclusive, across Volkswagen dealerships in the Middle East from December 2015.