Porsche’s latest advancements in automotive excellence and technological innovation were revealed at Dubai International Motor Show (DIMS) today as the prestigious event played host to two pioneering Porsche models. Unveiled to regional audiences for the first time, the new Porsche 911 Carrera showcased its standard enhancements, while the brand’s latest developments in evolving technology from the race track to the road were brought to life through the legendary 919 Hybrid.

With close to 900,000 units sold and an unrivalled legacy on both the race track and the road, the 911 has been one of the best-selling sports car of all time. Boasting new turbo engines, forty years in the making, the iconic 911’s enhanced performance, driving pleasure and efficiency was the focus in its Middle Eastern debut. Visitors to DIMS today were amongst the first in the region to catch a glimpse of the new 911’s refined exterior features including the redesigned rear lid with vertical louvres and distinctive rear lights. As it took centre stage for Porsche, the new model’s distinctive four point daytime front running lights were a standout while the updated Porsche Communication Management (PCM) system with a multi-touch display embodies the brand’s commitment to new technology.

Deesch Papke, Chief Executive Officer of Porsche Middle East and Africa FZE, commented: “Porsche is a brand that is fully committed to creating the sports car of the future and with the introduction of the new 911 we are breaking with a tradition by introducing the Porsche turbo technology in all the Carrera models. The new biturbo produces three hundred and seventy horsepower in the 911 Carrera and four hundred and twenty horsepower in the 911 Carrera S. In short this means and increased power output, more torque, faster acceleration and higher top speed. In addition, we have achieved a significant reduction in consumption of about twelve per cent compared to the previous generation.”

“A standard feature of the new 911 Carrera models is the enhanced Porsche Communication Management system which includes online navigation module and voice control. It can be operated by performing multi-touch gestures on the seven-inch display, similar to operating a smartphone. Operation has been made even more ergonomic and it makes it easier to concentrate on the most important connectivity of all – that is the best grip on the road. The 911, as has always been the case, is state-of-the art, and as is so often the case, even ahead of its time in many ways,” Papke added.

Adding to the excitement and exemplifying Porsche’s technology transfer concept, the 919 Hybrid model on display at DIMS this year represents the zenith of the brand’s latest E-Performance innovations. From lightweight design to pioneering efficiency, Porsche experiments with new solutions in motorsport through the 919 Hybrid, evolving race-winning developments to their road legal cars. 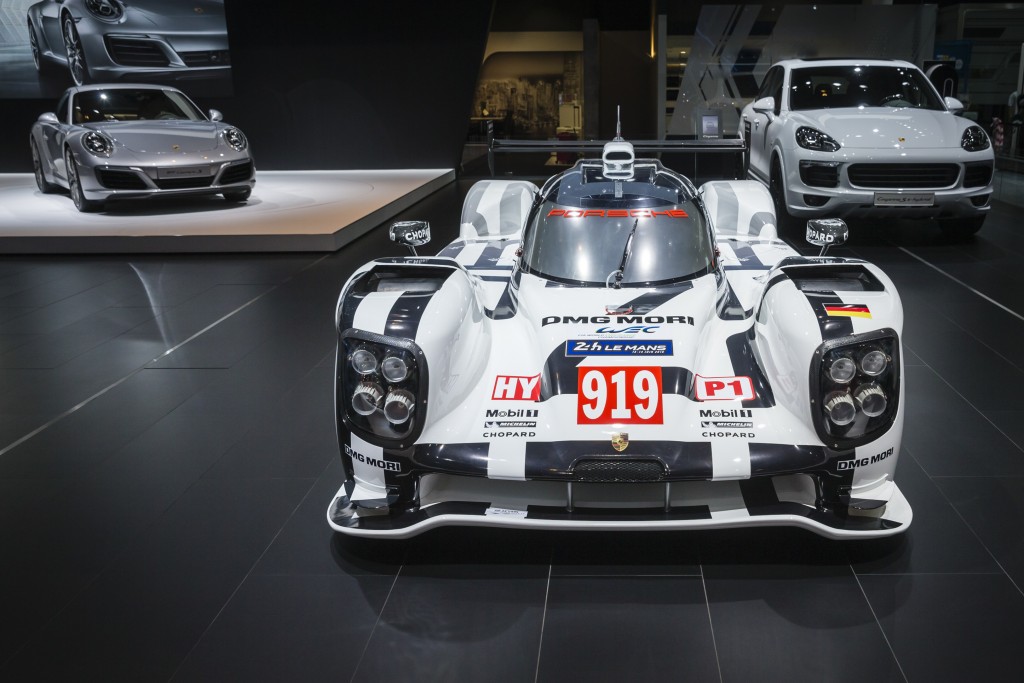 In June 2015, the 919 Hybrid affirmed its place in history with a one-two finish at the 24 Hours of Le Mans, the ultimate test of automotive capability. The car’s legendary status has been further enhanced following Porsche’s recent victory in the 2015 FIA World Endurance Manufacturer’s Championship where the top prize was secured with one round to spare.

Similarly the new 911 model is well equipped to continue its reign as segment leader and with the potential to complete a lap on the North Loop of the Nürburgring ten seconds faster than its predecessor and a top speed of 308 km/h, it was the Carrera S model that thrilled fans at the opening day of DIMS. Featuring innovative turbo flat engines, an advanced chassis designed for optimum performance and a ground-breaking infotainment system, the legendary model continues to set the benchmark in performance, driving pleasure and efficiency. All models across the range benefit from an additional 20hp, efficiency improvements of up to 12 percent.

The new Porsche 911 Carrera and the Porsche 919 Hybrid show car will be on display on the Porsche stand from November 10th until 14th at the Dubai International Motor Show.