Melbourne has been treated with a glorious sunshine for the season opener at Albert Park although it was 10c cooler than yesterday due to rain. Before the lights had gone out Bottas was declared unfit by the FIA Medical delegate due to the back pain suffered after qualifying leaving Williams with a single car on the grid. Kevin Magnussen’s McLaren poured out huge plume of smoke on his way to the grid between T5 and T6 while Kvyat made a trip into gravel due to a suspected gearbox issue and halted. Owing to that only 15 drivers started the Australian GP. 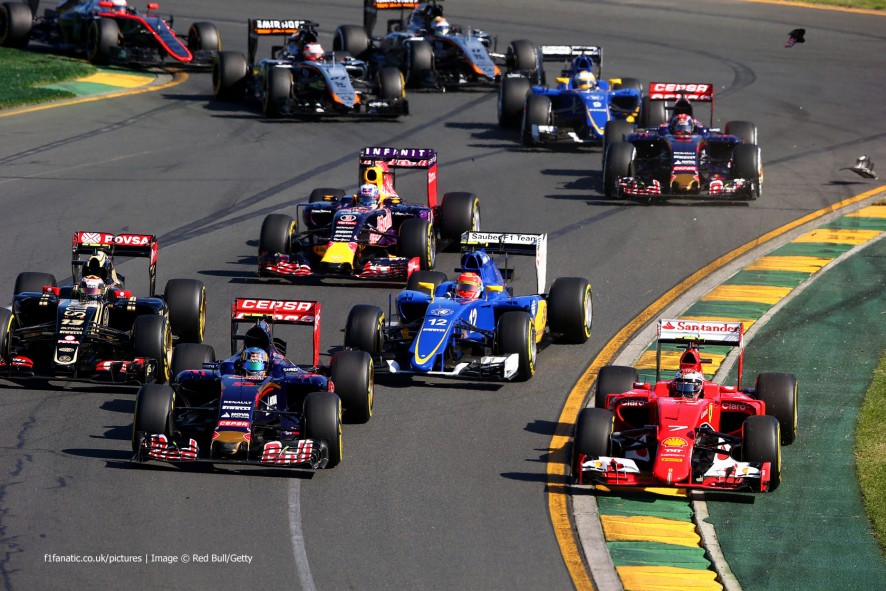 At the start Lewis and Nico led clear while Maldonado spun at Turn 2 and hit the barriers and the Safety Car was immediately out on a race that has a 60% chance of its appearance. His team-mate and Ericsson pitted together but the Lotus of Grosjean was wheeled back in due to the damages sustained and that put an early end to both Lotuses. SC was in on Lap 4 and quickly Hamilton started stretching his legs with which Rosberg responded to a few laps later. Nasr made a great start and up to P5 once and Ricciardo was under threat from Raikkonen’s Ferrari as Aussie fans held their nerves ahead of Sainz, Verstappen and Hulkenberg. 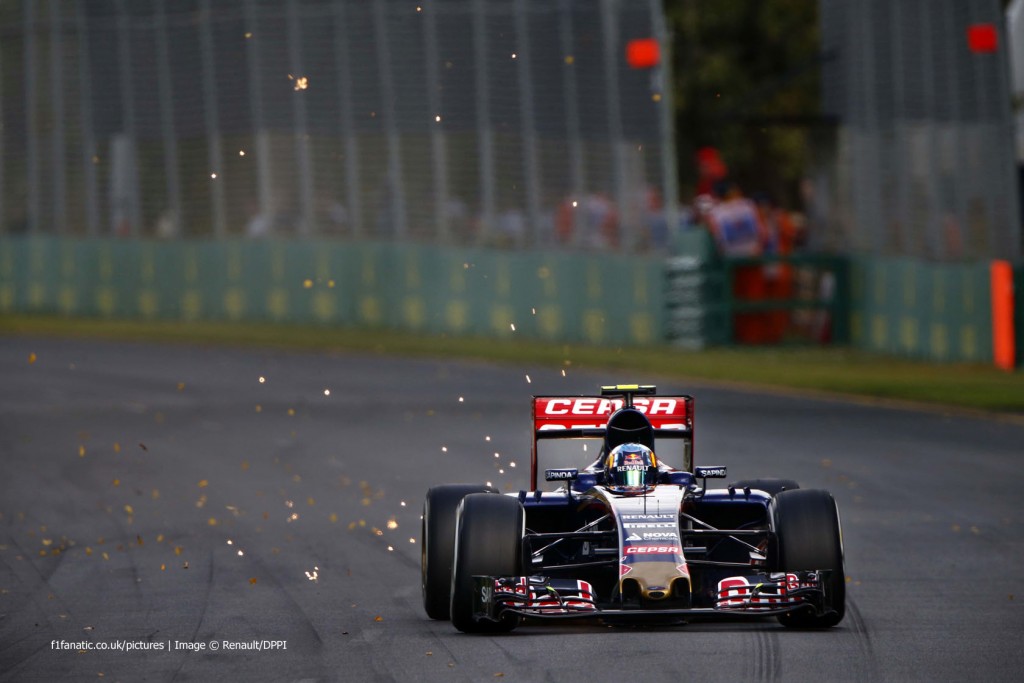 Perez pushed Button for twelfth and caused a collision at Turn 3 and the latter was informed of only 13 cars running to keep it neat and tidy. Raikkonen pitted for fresh soft rubber and rejoined eleventh. Hamilton opened up a bit more at the front and his lead was now 2.9 seconds on Lap 20 and set the fastest lap on the next. The front-runners started to pit as Felipe Massa came in for a set of mediums first and on Lap 26 and 27, Hamilton and Rosberg pitted for their first stops. The Briton led the pack four seconds clear while Vettel undercut Massa for third on his pitstop. 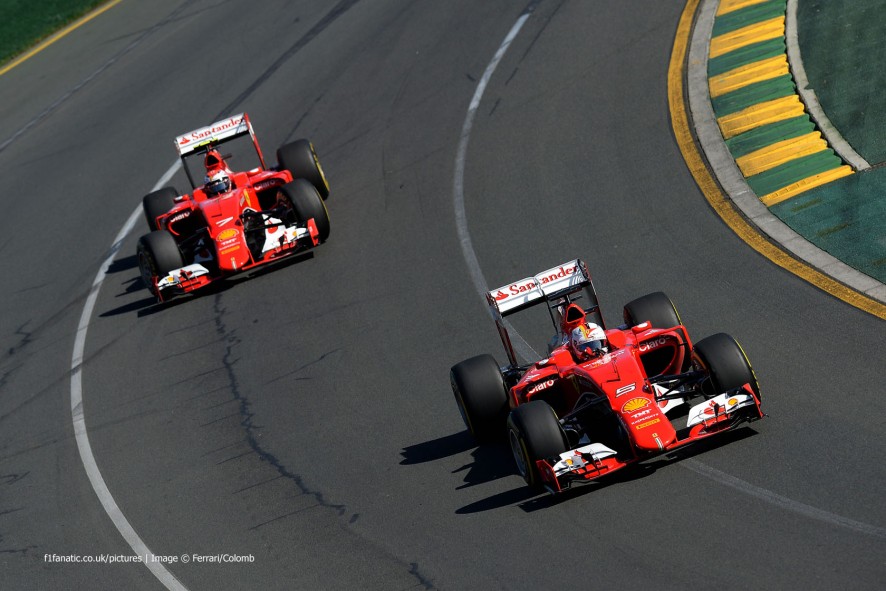 Sainz Jr was unfortunate to lose valuable time when the pitcrew struggled to remove the left rear tyre off and rejoined thirteenth. Raikkonen was on a mission to catch Massa for fourth and put in some flyers as the strong showing from the rookies suggested that they could be in for good haul of points. Rosberg closed the gap to 1.5 seconds on mediums before Hamilton fought back with speed and extended the gap to over two seconds. Shame on Verstappen as he pulled over to the side when blue smoke came out of his Toro Rosso while running eleventh after his second stop.

Raikkonen stopped on the side at Turn 5 while fighting with Nasr and replays indicated that his left tyre wasn’t fitted properly and will be investigated after the race. With only 11 cars on track, Ericsson pitted from eighth and back out ninth while Perez got past Button for the final points position. Hulkenberg was well set for seventh after the final stop while battle arose between Sainz and Ericsson for eighth. 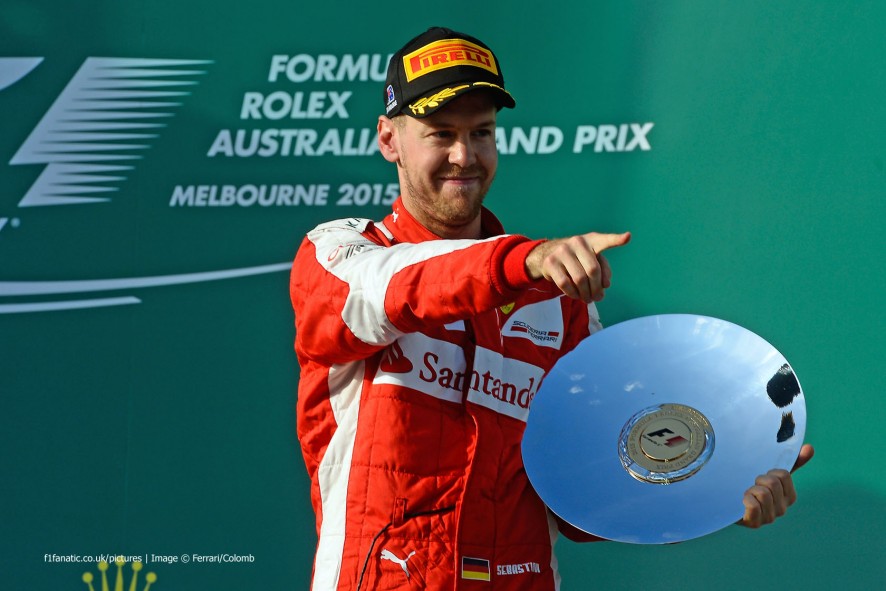 As the race got to closure the tussle for podium was on full heat – Nico Rosberg vowed to catch Hamilton and put in faster laps and got within 2.2 seconds but the leader had more tricks left in his bag and maintained a manageable gap. Massa’s hope of finishing third faded as Vettel responded brilliantly and extended the gap to 3.9 seconds.

On Lap 50, Jenson Button reported downshift issues to his McLaren as Ericsson overtook Sainz Jr at Turn 13 to secure eighth.

Hamilton managed a sizeable lead of 1.9 seconds for his eighth win in the last twelve races and 30th for the famed German outfit. Having handed the Jack Brabham trophy commemorating the legend, the double world champion drove like he meant to and didn’t put a foot wrong. You can’t help but think that the Mercedes W06 has only more speed at its disposal. 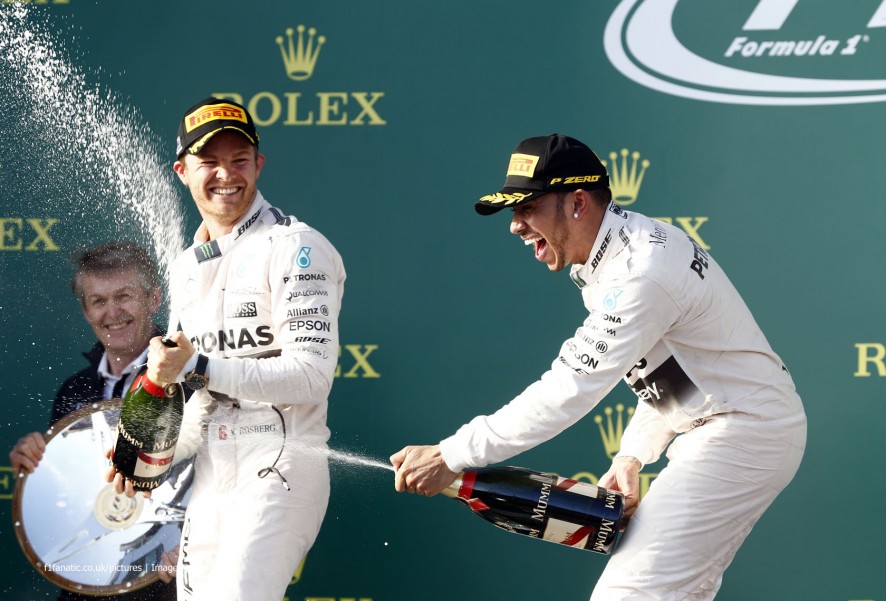 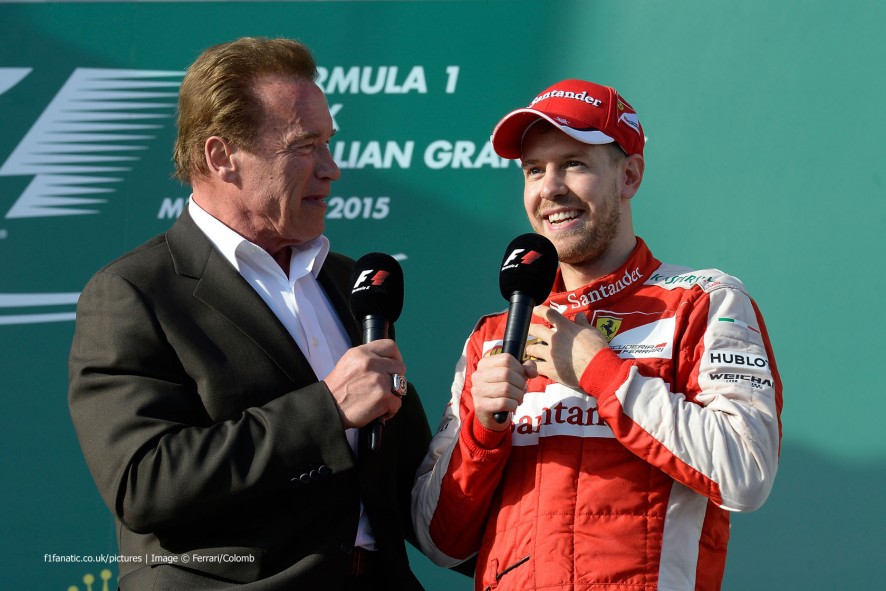 Rosberg equally impressed but it was not quite enough in the end. All smiles at Ferrari as Vettel opened his account with a third place finish and the car looked way better than of last year. Sauber’s rookie Felipe Nasr finished fifth and their first points since 2013. It was also the best result for a Sauber rookie on his debut since Kimi Raikkonen in 2001. Ricciardo, Hulkenberg, Ericsson, Sainz Jr and Perez rounded out the top 10.