On an average, out of the ten people I meet, eight people start a conversation about cars to me. I’ll admit that I need to clear their doubts most of the times and some people have me understand that their findings are far better than my suggestions – though I still enjoy every conversation, since it helps me study each product transparently rather than having a conversation with manufacturers about the same. Among the bunch of people I talk to, one of my neighbours is a big Tata Motors’ fan! He initially used an Indica and now changed to Vista. He recently test drove the Zest and came away impressed with the much improved build and ride quality compared to Tata’s old models. After the Zest and the Bolt, Tata Motors has brought their smaller hatchback, the Tiago.

This is the latest hatchback from Tata Motors, initially named as Zica and now called the Tiago – that is all set to revamp the brand’s identity in the Indian automobile industry. As you can see, most of the Tata Motors’ showrooms are getting renovated in a new theme which is to say the brand is getting a complete overhaul from scratch. The new portfolio of vehicles, be it the Zest or Bolt, or the now trending Tiago – looks fresh and promising. 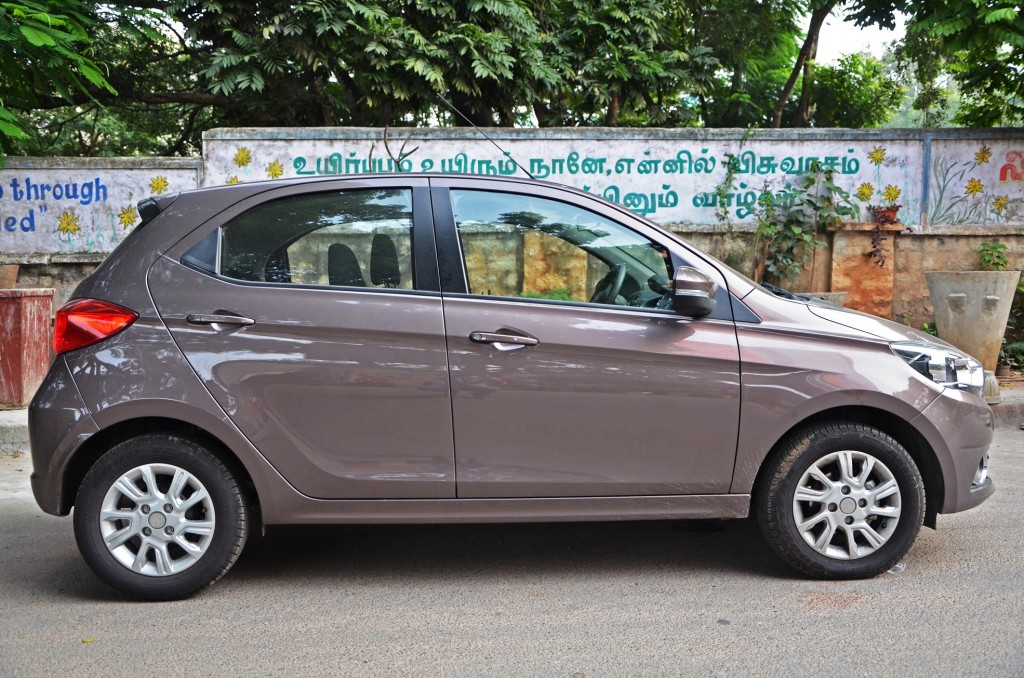 The Tiago is the first product based on the new IMPACT design language. The front fascia is unmistakably distinct with the large swept back headlamps and mesh type grille; it is sharp and protruding outwards, which gives it a striking look, and the piano black finish on the front grille adds on some premium feel. A strong side line that runs through the length of the car gives it a modern look and the tiny aero spoiler at the rear adds sportiness. The top variant gets 14-inch robustly designed alloys. 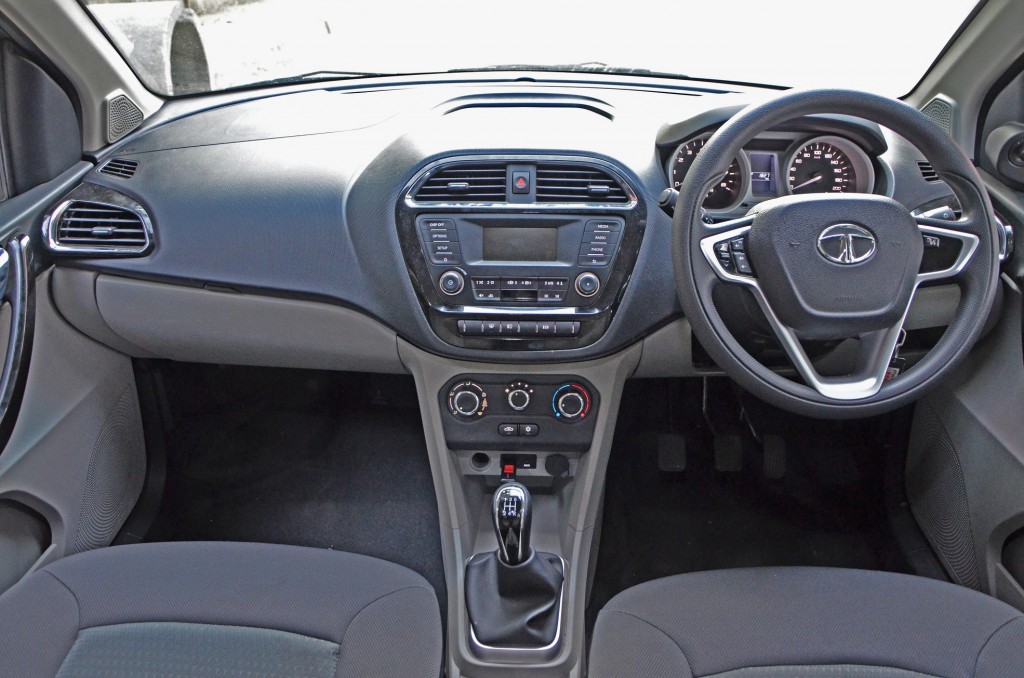 Step inside the Tiago and you will be greeted with an amazingly detailed interior. The fit and finish is excellent, which is why I liked the Tiago more from the inside. The dash is two-tone and uses black and grey, and the steering wheel is small in size to retain a sporty feel and comes loaded with music and telephone controls. The centre console has a tiny multimedia display which manifests music information, surrounded with buttons. Tata has used matching body coloured accents surrounding the AC vents, which are well designed and protrude to offer better airflow to the front passengers. The matching body colours around the AC vents are only for top- end variants in Sunburst Orange and Berry Red body colours; the rest get a piano black finish as in our car. The Tiago also has the juke app feature which allows you to connect one main phone and multiple others through it. The top-end variant XZ also comes with reverse parking sensors and dual airbags in the front, which is first-in-class since the competition comes with a single airbag on the driver side. There’s a pretty good amount of space at the rear, thanks to the 2400mm wheelbase. Though the seating capacity is for four, I was able to transport three people at the rear comfortably, but a bit more head room would’ve been welcome – and the boot comes with a decent capacity of 242 litres. 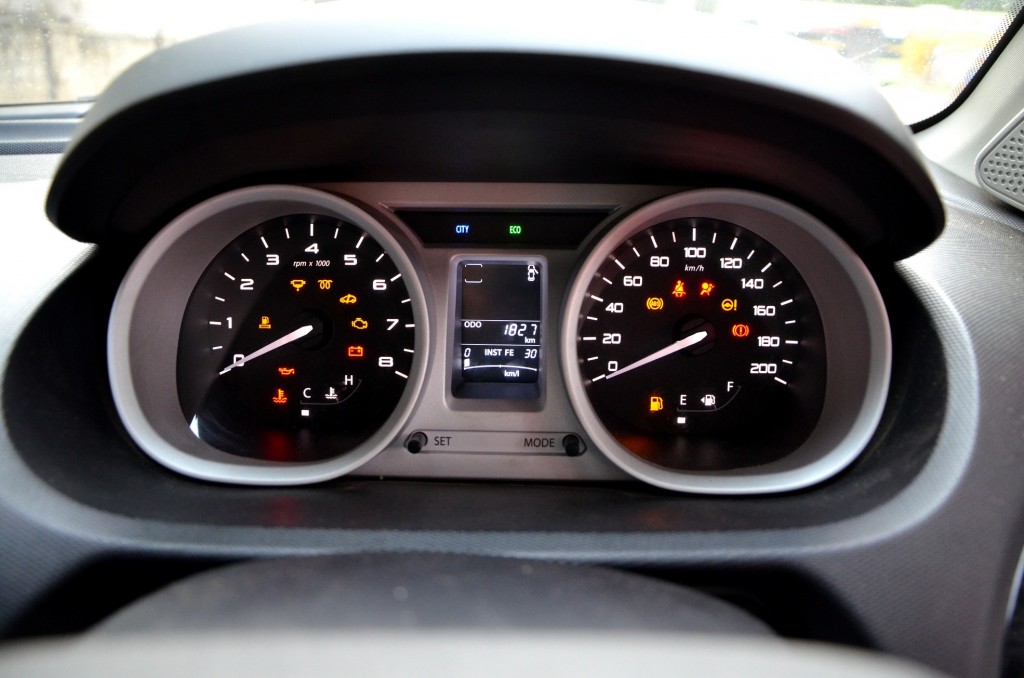 The Tata Tiago gets two new engines and a brand new chassis. The petrol mill is a 1.2-litre unit which churns out 84bhp and 114Nm. This second generation Revotron engine is mated to a 5-speed manual gearbox and is all-aluminium, which in turn helps to keep the weight down but a bit noisy at higher revs. Our test car was the top end variant XZ diesel which comes with a 1.05-litre Revotorq engine that churns out 69bhp and 140Nm of torque. I drove the Tiago from Chennai to Bangalore on a Friday evening, and I have to admit that the punchy nature of the engine makes the Tiago the best car for highway cruising in its class. With 170mm of ground clearance, the Tiago feels at home even on roads filled with potholes.

The Tiago – be it in petrol or diesel variants – is ahead of its rivalry. The Tiago, in its petrol avatar, rivals the newly launched 1-litre Kwid. The Tiago employs a 1199cc mill, while the Kwid comes with a 999cc engine. The power and torque for the Tiago is 84bhp and 114Nm respectively, while the Kwids’ is 67bhp and 91Nm – and the Kwid is almost 300kgs lighter than the Tiago which will help it in terms of better fuel efficiency. But on the safety front, the Tiago shines with more kerb weight and with dual airbags at the front. Other major rivals for the Tiago petrol is the Maruti Suzuki Alto K10, which is leading in the segment now. When it comes to the Tiago diesel, the main rival is the Celerio diesel, where again the Tiago shines in terms of engine capacity, power and torque.

To sum it up, Tata has ushered in a segment leader. The Tiago slots in a segment that veers between the Swift and Celerio. As my neighbours says, customers blindly believe Maruti Suzuki and are also concerned about resale value, which is how Maruti is being able to hold the market share. Be it in terms of styling, build quality, performance or safety, Tata has launched a better product, which is much ahead of its rivals.

From what we absorb, Tata Motors is working hard on every aspect, be it design, build quality or performance and now it is up to you (the buyer), whether to stick on to the traditional Marutis or understand the fact that Tata, Renault and Hyundai have better offerings than Maruti, at a lower price! But wait. When it comes to service, I must admit that Maruti has an upper-hand with a large-scale service network across all corners of our country – and this is where Tata must chalk out a fresh plan.