Ever since childhood, I’ve been crazy about one thing – machines. I still remember the days when I would yearn for a remote-controlled toy, but never availed of one, because they were too expensive. As the years went by, I began to see why cars, motorcycles and the lot meant the world to me. I have always played that “name the car” game whenever we went for a drive. The only thing that’s brought me here is my interest to drive, ride and then express myself about what I feel. I may not be able to afford buying you a diamond-studded chain at the moment as an automobile journalist, but believe me; you have something of a little more interest to boast of. As it turns out, 2015 seems like a year that wants to see me smile. I’ve just driven something very special; something fast and ‘green’. 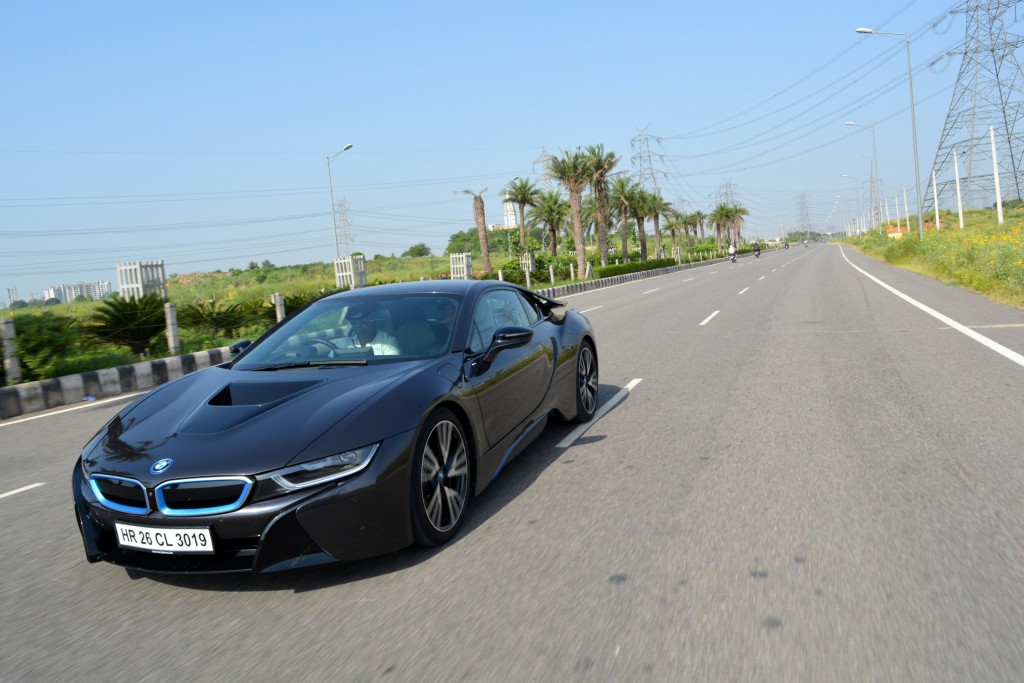 The BMW i8 is a plug-in hybrid sports car, and the flagship model of BMW’s burgeoning eco-friendly ‘i’ sub-brand. The i8 began with the 2009 Vision EfficientDynamics concept, which reintroduced the idea of a mid-engined BMW flagship and drew power from two electric motors and a three-cylinder turbo diesel engine. That became the plug-in hybrid i8 concept at Frankfurt two years later, swapping the diesel for a petrol turbo.

Now, the production version has arrived. It is made from the lightest, strongest materials using the most advanced techniques that BMW could apply, and it’s driven by a revolutionary petrol-electric plug-in hybrid, all-wheel drive powertrain. This is Munich’s little miracle: a modern hypercar done for a fraction of the price. And it looks sensational.

How is it made?

The i8 is made based on BMW’s LifeDrive platform. It combines a passenger cell and doors made of resin-injected carbon fibre-reinforced plastic (CFRP) with front and rear sub-frames and crash structures in aluminium to create a super-lightweight body. The CFRP tub is 50 per cent lighter than if it had been made of steel and 30 per cent lighter than had it been aluminium. Altogether the i8 weighs just 1486kg with a very low centre of gravity at less than 460mm.

How does it look?

If Christian Bale is playing Batman again, he wouldn’t mind using the BMW i8 as his Batmobile! The design is so striking that it looks like it came straight from Mars! I’ve never seen a production car look so much like a prototype. It is full of sharp edges, highlighted colours and LED lights – and of course those utterly superb butterfly doors.

The i8 received waves, thumbs-ups, horn beeps and general staring wherever it went; from young boys staring open-mouthed, to a middle-aged couple, before giving an enthusiastic thumbs-up, the i8 is almost universally loved for the way it looks.The wide, low stance is aggressive and purposeful without being intimidating, while the LED brake and daytime running lights look like they have been lifted straight from a spaceship.

The i8’s butterfly doors are pure bliss; they sure make dropping into and climbing out of the leather, heated and fully electric seats utterly impractical, but there’s no denying the fun factor. 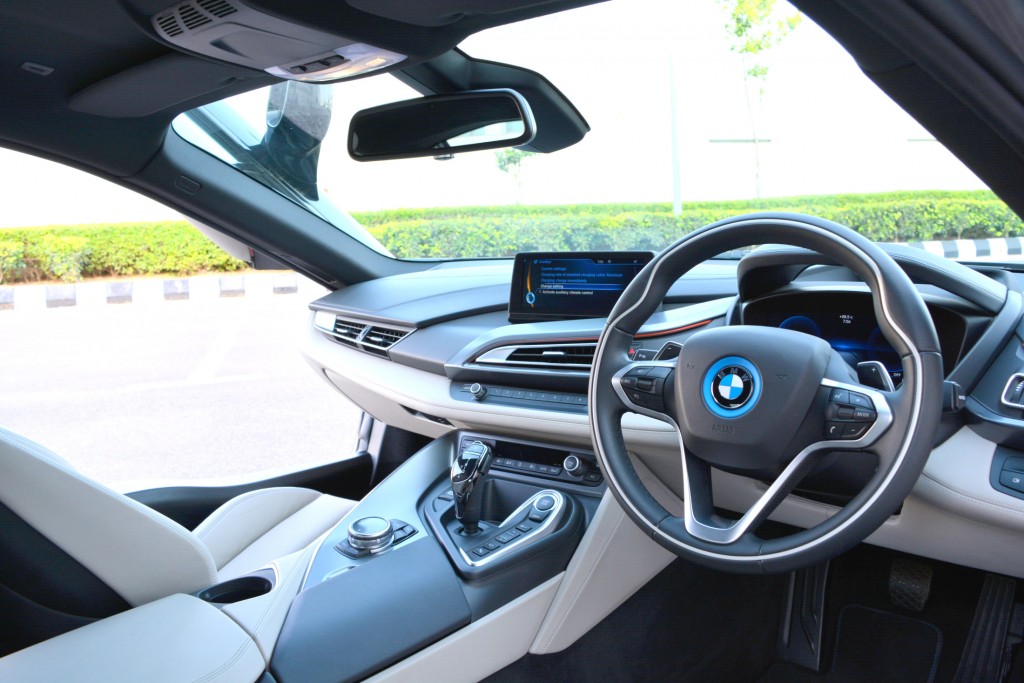 How is it inside?

A computer screen replaces conventional dials behind the steering wheel which is lifted straight from the BMW 7 Series; joining this is a second screen in the dashboard hooked up to BMW’s iDrive entertainment and sat-nav system. Both are bright, sharp and clear, even in direct sunlight.

Parking sensors and four cameras make getting the i8 into a tight spot a doddle. Visibility is very good for such a low car. It also displays a top-down view of the car and its surroundings on the iDrive display for navigating a tricky car park.

It takes a while to get used to the car. I suggest learning a bit of yoga to those who are planning to buy an i8, so that it gets much easier to get in and out of the car. The rear seats are intended for children; you can technically get small adults in the back, but it is a tight squeeze; instead of a 2+2, think of the i8 as a two-seater with plenty of storage in the back.

Actual storage is at a bare minimum; the boot is only large enough for two small bags for shopping and the interior is lacking in storage, too. There are no door pockets (for obvious reasons) and just a single cup holder for the driver and front passenger, although there are two for those in the back.

A tiny glove box is barely large enough to accommodate its own door, plus two very shallow bins in the centre console are big enough only for your phone, keys and wallet. By and large, it’s an interior you never want to get out of. 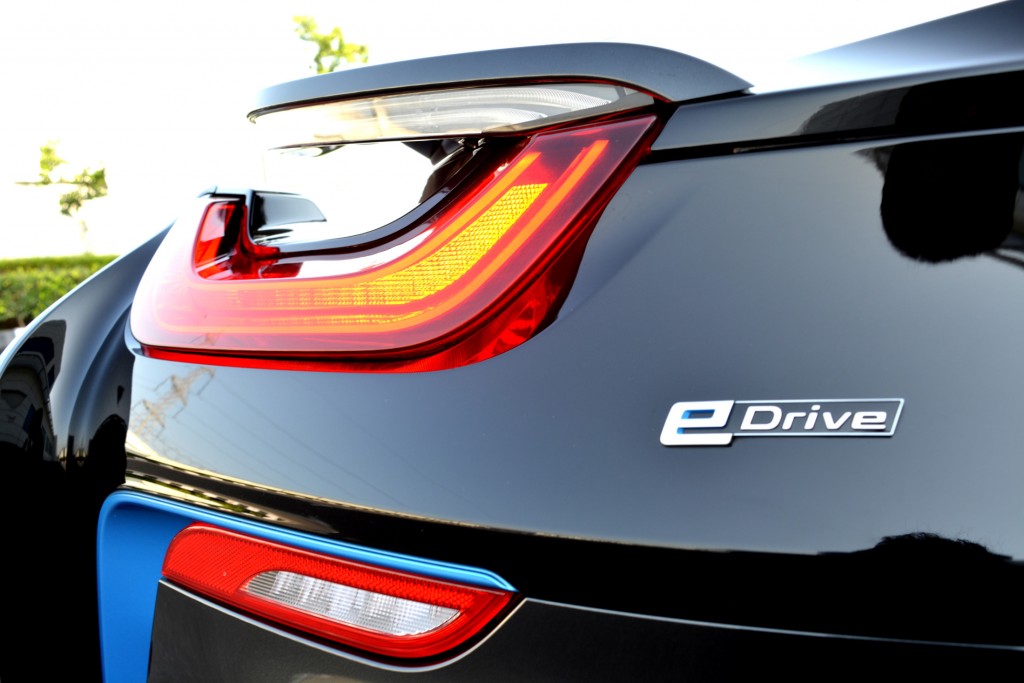 What about the engine, electric motor and charging?

Well, I told one of my non-car guy friends about my experience with the i8. When he heard that the i8 shares its engine with that of the Mini Cooper, he was lost for words. Until I revealed the rest, that is. The combination of the electric motor and the petrol motor results in a total of 357bhp and 570Nm of torque which pulls the i8 from 0 to 100kmph in just 4.4 seconds(claimed).

The i8 sticks to the road nicely even during high speed cornering, because it’s an AWD car. The electric motor drives the front wheels and the petrol motor sends power to the rear wheels. Gear shifts are lightning quick, but even in sports mode, it is not as ferocious as it looks. 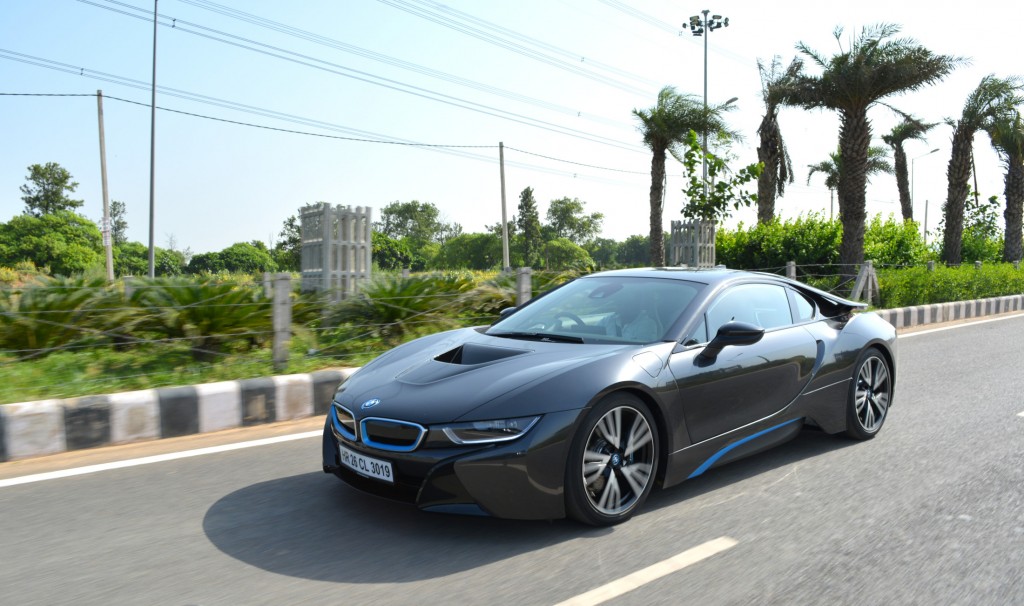 BMW has managed to maintain the 50:50 weight distributions with this car. As I said, it is capable of cornering really well with a low centre of gravity along with the AWD system, though we didn’t get a chance to test it on the highways.

The i8 sounds wonderful from the inside, but to pedestrians and other road users it’s a different story, because some of the sound you hear is actually coming from the car’s high-end Harman Kardon stereo. 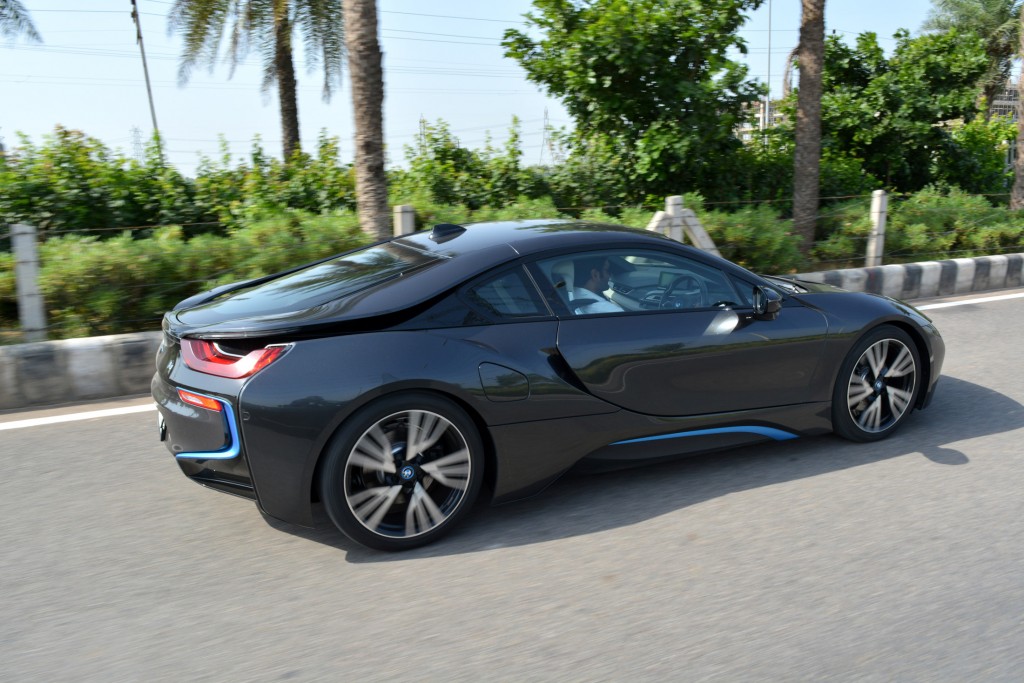 Overall feel about the i8

Driving the BMW i8 is not a usual test drive. It’s an experience which must be experienced. The spaceship design, the butterfly doors and the blue interiors makes things a bit more special. You don’t feel as nervous as when you drive an AMG or Lamborghini while you drive an i8. You have instant power under your right foot whenever required. The i8 packs great looks, eco-friendliness, frugality, and yes – sportiness too. 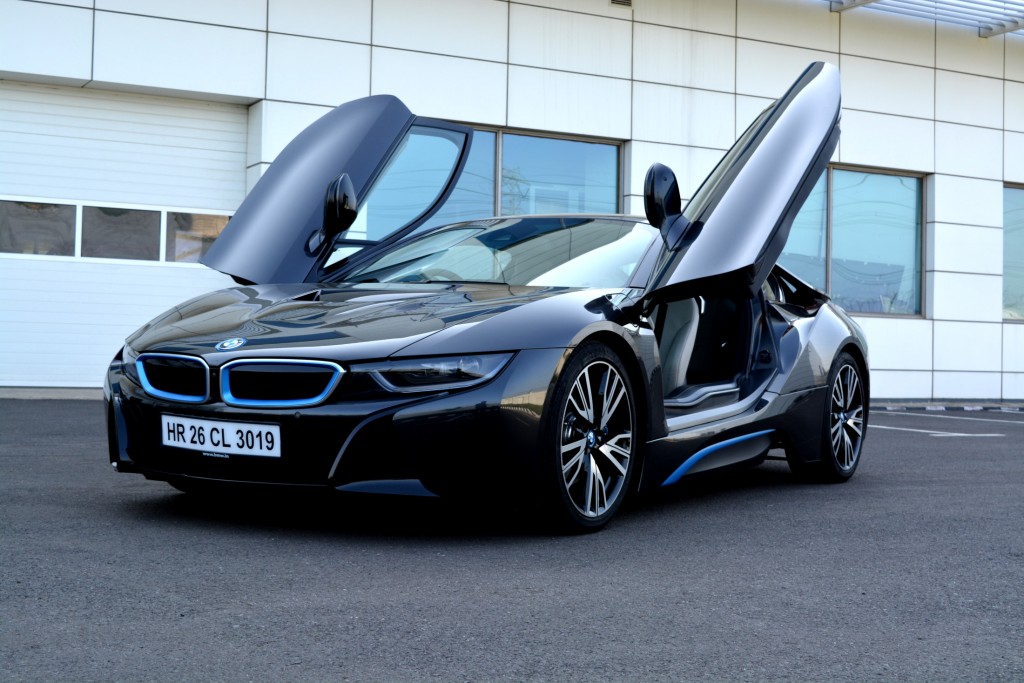 Now that you’ve read my review, Mum – I’m hoping you have a lot to say to the neighbours and relatives. Like that first time you yelped in the Mercedes SLK 350 and went on-and-on about it, remember? I know you’re not going to be able to wear the i8 around your neck, like a diamond-studded chain – but this will stay with you in your heart forever. Oh, and there’s more to come, by the way… 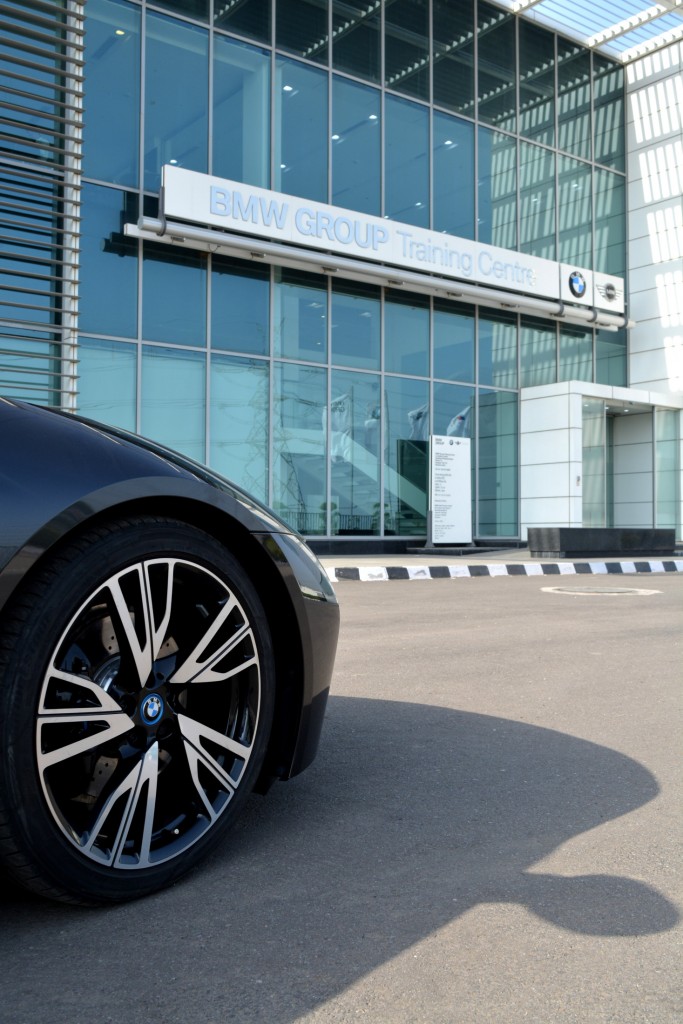