Volvo is very confident about their cars. Be it their flagship SUV XC90 or their yet to be launched entry-level compact SUV XC40. Volvo believes and they focus on customers who always want more, and that’s why Volvo cars come fully loaded. Just like the XC40 which will only be launched in the R-Design spec in India, Volvo’s strategy is to give more to their customers in an eloquently unique way.

We recently drove Volvo’s newest entrant into the Indian market – the XC40. The car is already a winner since it has bagged the award for 2018 European Car of the Year which adds another feather in Volvo’s cap. Here are the top 6 things to know about the Volvo XC40 in Indian spec.

Volvo’s design language has immensely changed over the years as we all know and the new XC40 looks striking. Volvo said you can’t find another Volvo which is as edgy as the XC40, which is indeed true. While other manufacturers launch their compact SUVs by shrinking their bigger brothers, Volvo stands out from German manufacturers by bringing out an all-new design with the XC40.

The car which you see above is the R-Design trim and Volvo will be launching the XC40 in just the R-Design trim as of now in India. The XC40 is the first SUV built on the Compact Modular Architecture (CMA) platform and is longer, wider and taller than the Audi Q3, and has a longer wheelbase too, but it is shorter than the BMW X1 in terms of length and wheelbase. In just one look, you will agree that this isn’t a shrunken XC60, but a completely new SUV in terms of design.

The signature front grille is smaller with the massive logo in the centre, with horizontal slats and so are the headlamps with the Thor’s hammer LED DRLs. Being an R-Design, everything is blacked-out to look sporty. Body cladding is more pronounced, and the 18-inch wheels wrapped in 235/55 Pirelli rubber looks chunky. There’s also an option of 20-inch wheels. With the upward sloping window line at the rear, Volvo-ish rear tail-lamps and the dual chrome mufflers altogether suits the car well and looks top notch.

And oh, the XC40 gets a dual tone paint job with a black roof. 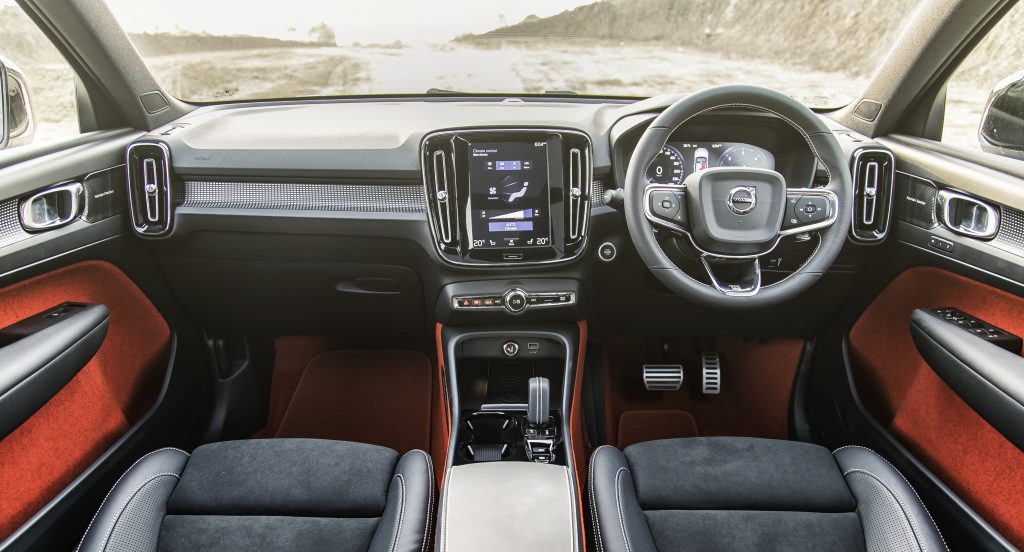 The interiors score a 5-star rating in terms of trendiness and practicality. The XC40 is available in two interior trims – All Black and Black and Lava orange (as Volvo calls it). Certainly the black with lava mix suits the XC40 reassuring its sporty character with the R-Design. The seats are well crafted with a mix of leather and Alcantara and are electrically adjustable, with driver’s side getting a memory function too. The steering wheel feels chunky and precise to hold and gets paddle shifters too to enhance the dynamic driving experience. The digital instrument cluster and 9 inch touch screen is straight from the XC60 and is very intuitive. The vertical air vents highlighted in chrome and the silver trim on the dashboard adds the character of this compact SUV. 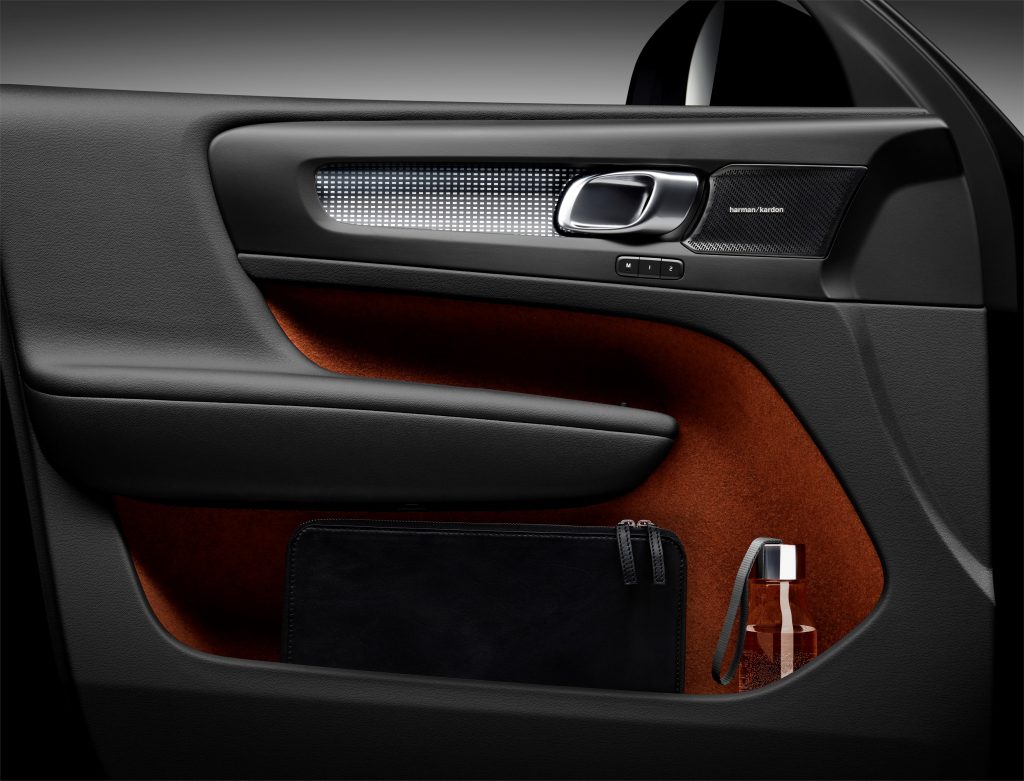 As mentioned, the cabin is trendy and practical with lots of storage spaces. Thanks to the absence of door speakers (which have been repositioned to the top of the dashboard), which gives you huge door pockets and there’s a good amount of space ahead of the gear console, including a slot to charge your mobile phone wirelessly. You get a hidden storage area under the driver’s seat and the armrest console is large.The boot is huge at 460 litres and there’s an added storage compartment between the boot floor and space-saver spare wheel area.The rear seats are spacious enough for 6 footers and there’s enough headroom too. The only thing I dislike is the seats not being wide enough, hence carrying three at the rear will not be very comfortable.

The XC40 uses the same motor as in other higher models: the 2-litre 4 cylinder diesel engine which churns out 190bhp of max power and 400Nm of max torque. The Diesel motor is well refined and you get very minimal turbo lag. Despite the taller stance, the XC40 feels planted on higher speeds and there’s minimal body roll when you attack corners at higher speeds. We were cruising above 160kmph on the 4 lane stretch on the outskirts of Hyderabad and came away impressed with the ride quality and comfort. The 2 litre motor pushes this baby SUV to 100kmph in just over 7.9 seconds.

You get 4 driving modes as standard – Eco, Comfort, Dynamic and Offroad. The motor is mated to a silky smooth 8-speed automatic transmission and uses the Haldex AWD system. However, most of that power goes to the rear wheels, which thankfully doesn’t kill the fun factor while driving the XC40 and makes you feel alive.

The XC40 in R-Design trim means it gets just everything! Expect the air suspension in the bigger siblings; the XC40 literally gets everything, right from the 9-inch touch screen to the radar systems.

Volvo is aiming to sell 700 units of this baby SUV in this financial year. The all-new Volvo XC40 blurs the line between the car you want and the car you love in the entry level luxury SUV segment. The XC40 is a completely loaded package and you just can’t ignore the fact that this car is going to shake the segment.