As the motoring industry descends for the 13th Dubai International Motor Show, Nissan has announced the world premiere launch of its Nissan Patrol Desert Edition, which was developed in partnership with UAE Rally Champion, Dr Mohammed Ben Sulayem, FIA Vice President and President of the Automobile and Touring Club UAE, specifically for regional consumers. 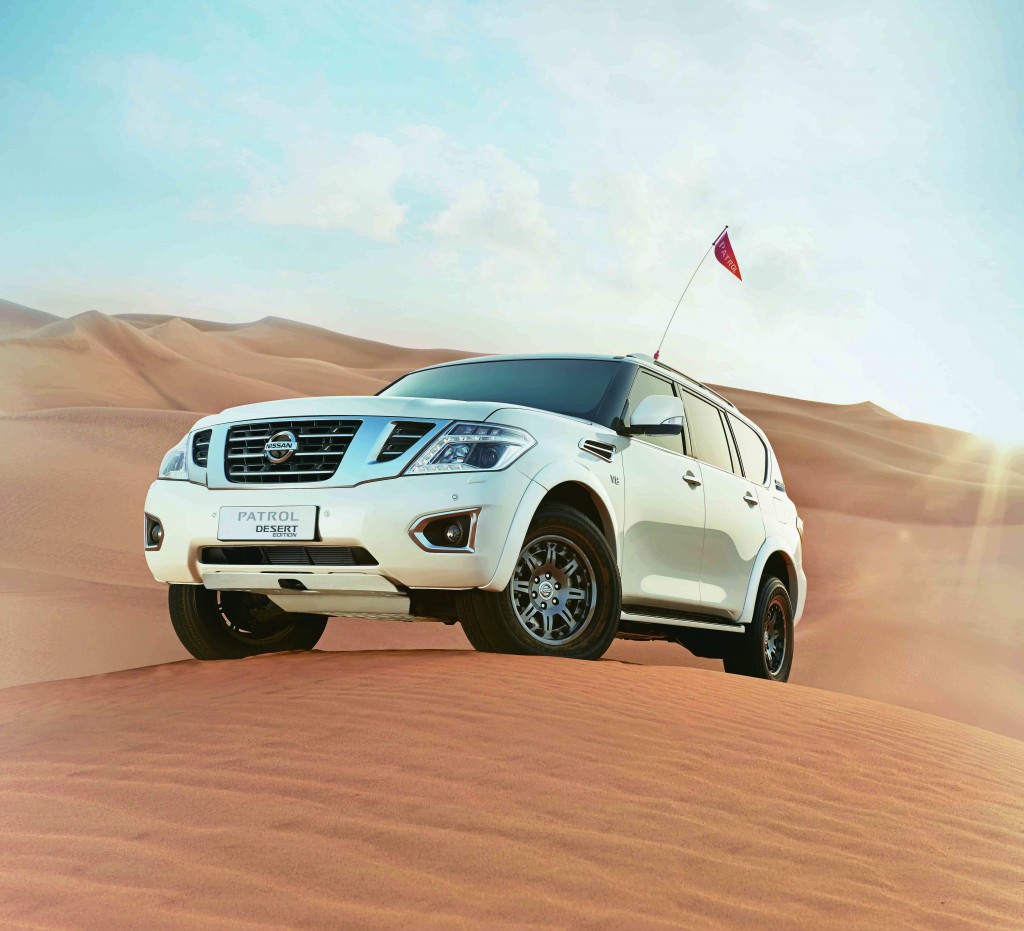 The global debut of the Nissan Patrol Desert Edition affirms the Japanese auto maker’s strong commitment to delivering tailored models for customers in the region. It follows a GCC research study that showed demand for a bespoke version of the Nissan Patrol that takes its already legendary off-roading abilities to even greater heights.

“At Nissan we have a strong commitment to the region and are believers in understanding the specific demands of our Middle East customers,” said Managing Director of Nissan Middle East, Samir Cherfan. ”We received resounding feedback calling for even more luxury and performance, both on the road and off it. We are therefore extending our range with some extremely special, bespoke versions of the Nissan Patrol. With the world premiere launch of the Nissan Patrol Desert Edition at the Dubai International Motor Show we are delivering a tailored vehicle that fits our regional customers’ requirements.”

Nissan’s regional research survey, which was conducted in 2014, also highlighted that its GCC customer’s demanded for an even more luxurious and sporty version of the Nissan Patrol. This insight led to the development of the newly revealed Nissan Patrol NISMO, which the automaker announced today will be available before the end of its fiscal year*. The Patrol NISMO will be priced from $100,470 USD in the UAE. Prices per market will vary from region to region.

“It gives me great pleasure to share the price and availability details for the iconic Patrol NISMO,” continued Samir Cherfan. “The Nissan Patrol already occupies a unique place in the hearts and minds of off-road enthusiasts in the Middle East. With the addition of both the NISMO version and the Desert Edition, Nissan is engaging directly with its customers and delivering incredible vehicles that fit their exact requirements”.

With a continued focus on ‘Innovation that Excites’, Nissan also used the Dubai International Motor Show to announce its partnership with Etisalat. Headed by Nissan, and powered by Etisalat’s network and M2M Control Center Platform, the ‘Nissan SmartCar’ application enables customers to control key features of their car using their phone, a first for the region. Owners of the Nissan Patrol MY16 and all-new Nissan Maxima 2016 will be able to turn on the AC, lock and unlock their cars remotely and track them, among other capabilities. ‘Nissan SmartCar’ will offer the ultimate in convenience, security and control.

To add to its packed agenda, Nissan Middle East also showcased the world premiere launch of it “Nissan Patrol: The Movie” experience, where visitors get the chance to star in their own action movie, featuring the 2016 Patrol. Visitors are coached by a director to complete unique shots in front of a special green screen, before exiting to receive their personalized trailers and movie posters. For those still fancying their five minutes of fame, the “Nissan Patrol: The Movie” experience will be available to all visitors throughout the Dubai International Motor Show at Nissan’s outdoor stand located in the courtyard next to Sheikh Saeed Hall Entrance.

Nissan Middle East’s indoor stand is packed with an exciting range of vehicles that appeal to this region’s love of engineering excellence, cutting-edge design and true value for money. In addition to both the NISMO range and the Nissan Patrol Desert Edition, the all-new Nissan Maxima is also taking center stage. The complete Nissan range includes the MY2016 versions of the Nissan Patrol, 370Z, Altima, Juke, Pathfinder, Pathfinder Hybrid, Sentra, Sunny and X-Trail.

In addition, Nissan is providing a wide array of engaging stand activities using the latest in interactive technology. These include a UEFA Champions League Penalty Shoot-out Challenge, the GT-R Racing game where visitors will play using their mobile devices and fun Z-elfie booth that will capture exciting motoring moments. There will also be an opportunity to take part in the first interactive after-sales experience, which will visually represent the importance of using genuine Nissan parts and the effects of non-genuine parts on a vehicles performance, safety and resale value.

“Nissan goes from strength to strength, not only in this region but around the world,” says Cherfan. “We engage with our customers and the result is an astounding range of models that appeal to everyone, no matter what their requirements are. With the embracing of new technologies, Nissan will continue to be at the forefront of this great industry.”