“The all-new Audi R8, all-new Audi A4 and the Audi RS 3 all showcase our brand philosophy ‘Vorsprung durch Technik’”, says Enrico Atanasio, Brand Director of Audi Middle East. ”We are also proud to present the all-new Audi Q7 and the TT Roadster, which have recently arrived at our dealerships and have been fascinating  customers with the latest in Audi technological innovations.” he continues.

To complete the performance line-up on the Audi stand at the Dubai Motor Show, are the Audi S3 Sedan, S6, S8 and the TT Coupe.  Audi’s most popular models are also on show and include the Audi A8 L, the A7 as well as the popular SUV range with the Audi Q3, Q5 and the all-new Q7.

With the reveal of the Audi R8 –Audi presents the second generation of its high-performance car. The V10 mid-engine and a newly developed quattro permanent all-wheel drive system ensure breathtaking driving performance, especially in the top-of-the-range version with 610 hp: achieving 0 to 100 km/h in just 3.2 seconds. Top speed is 330 km/h. With the new Audi R8, Audi engineers show how race expertise on the track has been developed to benefit the driver for the road. The new R8 V10 plus is the most powerful and fastest series-production Audi of all time. The V10 engine, whose maximum torque is available at 6,500 rpm, a 7-speed

S tronic transmission and a dry weight of 1,454 kilograms demonstrate how close the all-new Audi R8 is to motorsport. Deliveries to customers in the region will commence in the second quarter of 2016.

The second highlight of the Audi stand is the all-new Audi A4, which will come to the Middle East in three different TFSI engine variants: 35 TFSI with 150 hp, 40 TFSI with 190 hp and the top of the range engine 45 TFSI with 252 hp. The new generation of four-cylinder TFSI engines with re-engineered combustion methods set benchmarks in terms of fuel consumption, emissions and performance for four-cylinder gasoline engines. The top-of-the-range-engine produces produces 252 hp and 370 Nm of torque between 1,600 and 4,500 rpm. The sprint from 0 to 100 km/h takes 5.8 seconds.

The Audi A4 offers an abundance of intelligent technologies, which are a first in this segment. Technological highlights of this all-new model include the Audi virtual cockpit, the Audi Matrix LED headlights, the Audi smartphone interface, the Bang & Olufsen Sound System with 3D sound, the Audi phone box with wireless charging, the head-up display and new driver assistance systems such as park assist, rear cross-traffic assist, exit warning, collision avoidance assist, turn assist and the Audi pre-sense systems.

The Audi A4 will be available in dealerships across the Middle East from early 2016. 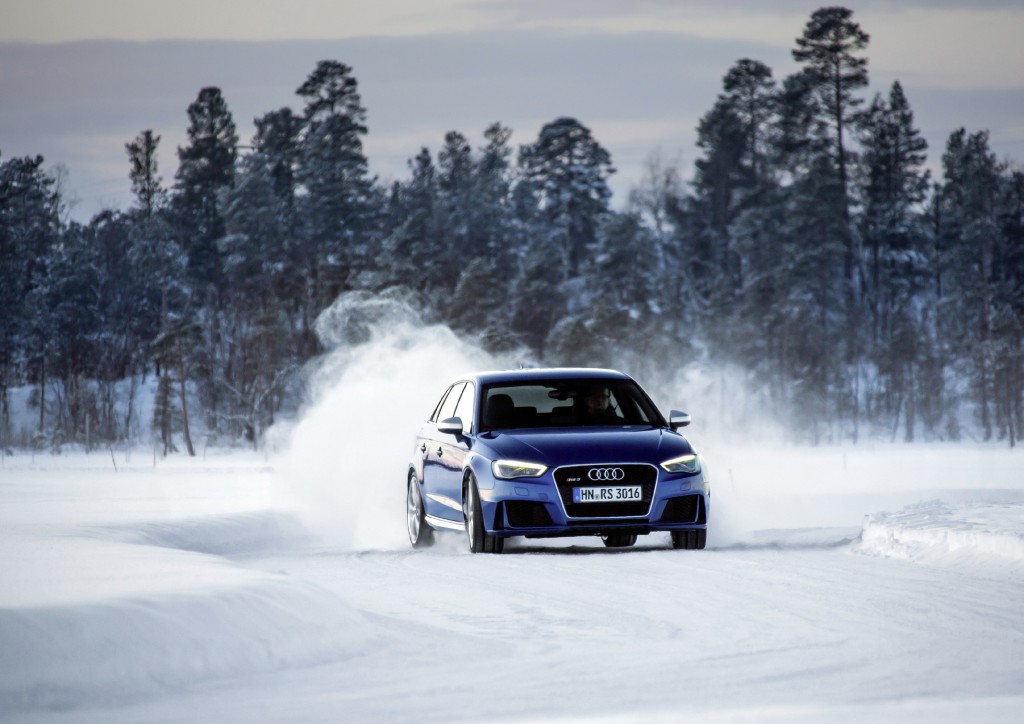 The RS models represent the high-performance automobiles of quattro GmbH.

With the regional premiere of the Audi RS 3, Audi is showcasing the sporty top model of the A3 model range with the most powerful production five-cylinder engine in RS history with 367 hp. With their husky, throaty sound, exhilarating free-revving and brawny power – the five cylinder engines from Audi are legendary. The engine of the new RS 3 is the multiple award-winning 2.5 TFSI that produces 367 hp and 465 Nm of torque. The acceleration of the compact five-door from 0 to 100 km/h is 4.3 seconds, and its top speed can be boosted to 280 km/h as an option. Its NEDC fuel consumption is just 8.1 liters per 100 km. The 2.5-liter engine has been voted “International Engine of the Year” in its class for five consecutive years since 2010.

A seven-speed S tronic, which shifts even faster than in the previous model, transmits the power of the 2.5 TFSI to the quattro permanent all-wheel drive system. The quattro system features torque vectoring based on intelligent software, and it is systematically designed for maximum driving enjoyment. The new Audi RS 3 steers directly into curves; its power distribution can be varied from balanced/neutral to significantly rear biased, depending on the mode selected in the Audi drive select handling system.

The pivot bearings of the front axle, progressive steering, RS-specific sport suspension and optional Audi magnetic ride adaptive damper control have been designed specifically for the RS. Market introduction for the RS 3 is planned for January 2016. Starting price is AED 211.000.