Volkswagen Motorsport India concluded the first round of its premium one-make series Ameo Cup 2017 at the Kari Motor Speedway in Coimbatore. Day 2 of the weekend started with a clean race. Karminder Pal Singh from New Delhi carried the momentum from Qualifying to take the first victory of the season in first race. As the lights went off, Karminder got off to a great start and held it all through the race. Sandeep Kumar from Chennai followed him to grab second position after battling with Jeet during the initial laps. Jeet Jhabakh and Donavan Vaz crossed the line behind Sandeep but were penalised 20 seconds for overtaking under yellow flag. Aditya Pawar had closed in on both of them when the safety car came out on lap 10. After Jeet and Donovan got penalised, Aditya Pawar came up the order to take the final spot on the podium for Race 1.

Race 2 of the weekend started with top four finishers of Race 1 reversed on the grid. The second race of the day turned out to be an action packed one as the leaders from the first race were now hunting for positions coming from the back. Starting at pole was Tauhid Anwar from Bangladesh alongside him was Aditya Pawar, while staring on second row were Sandeep Kumar and Karminder Pal Singh. As the race started Sandeep, Karminder and Dhruv overtook Tauhid at the first corner while Aditya dropped several positions. The battle for first position was intense throughout the race. Karminder tried challenging Sandeep Kumar almost every lap. However, driving on a very defence line, Sandeep Kumar managed to stay ahead and went on to win the race. Dhruv Mohite played safe though the race by staying behind the race leaders and finishing third on the podium. Behind the top three was Jeet Jhabakh who drove impeccably through the race starting at the eleventh position moving on to sixth by end of lap 1 and finally finishing in the fourth position for the second race of the weekend.

Mr. Sirish Vissa, Head of Volkswagen Motorsport India, commenting on the first round of the season said, ”The Ameo Cup race car has exceeded the expectations and has raised eyebrows with the speed and consistency on the race track. I am very proud of the car, especially since we have developed it completely in India. Even the racers have done a phenomenal job over the weekend. For the next race we move to MMRT where the cars would be even faster and it will be exciting to see how these racers perform in the Round 2.”

Volkswagen Ameo Cup 2017 second round will be held at Madras Motor Race Track on July 22nd and 23rd 2017. The live timings during the race can be followed at http://madrasmotorsports.in/livetiming/live.html 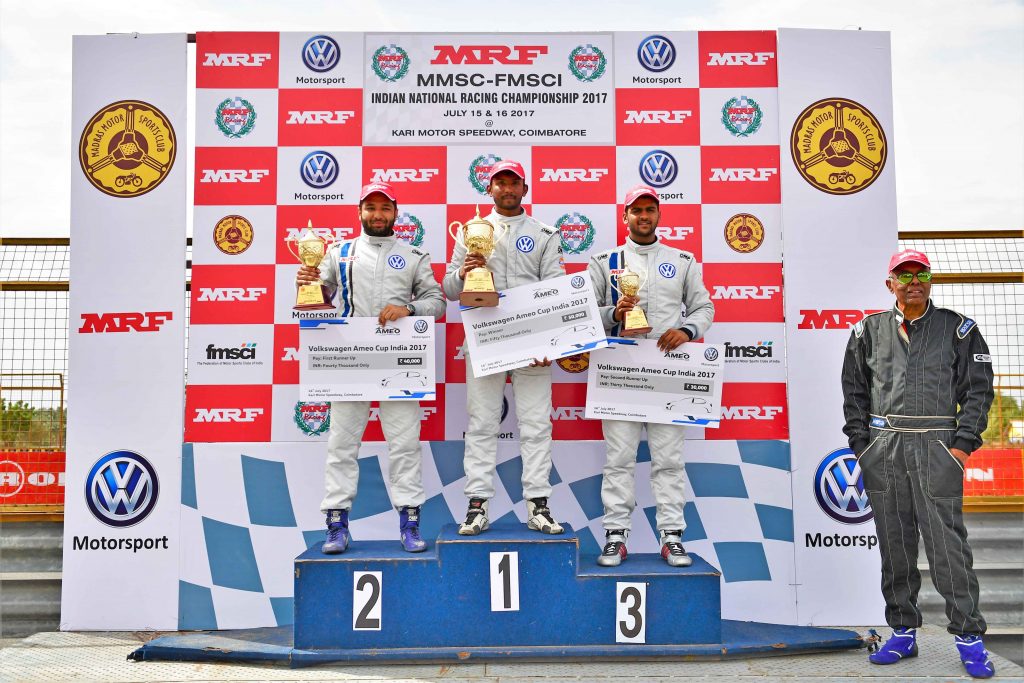