Qualifying promised to be a battle between team mates at the top. No wonder who would lock the front row out as Mercedes looked might quick from the rest. It can be taken from the practice that Raikkonen and Vettel would have a bit of advantage over the Williams pair who were closely followed by Riccardo and the Toro Rossos. McLaren’s woes continued with lack of pace as they were set to find it difficult to not to get knocked out from the first part of qualifying.

Q1: “showers are building up” was the call for Force India’s Hulkenberg as first qualifying session came alive with cars heading out to the track. Verstappen was locking up all sessions as lightning threatened from distance. Hamilton set the lap of 1:39.269 to set the timing screen alight as a little while later Bottas moved to second. Rosberg registered a lap to tuck behind his teammate ahead of Vettel. Lotus’ Grosjean put himself into contention for Q3 with a move up to tenth ahead of Ericsson. As the ambience got darker the fight for a spot into Q2 continued. McLaren must be disappointed with the elimination as Button out qualified Alonso and Merhi for 17th. Nasr finished a lowly 16th while Sauber teammate Ericsson completed an impressive 7th. Both Manor drivers were subjected to steward’s dispensation to race.

Q2: As spots of rain expected all the drivers wasted no time and made their way to the track for a Q3 berth. Vettel crossed the line 1:39.6 but it wasn’t enough to beat Rosberg. It really started raining hard as Raikkonen was caught out in traffic and finished his flying lap 11th. He was told on the radio that it’d be almost impossible to improve on the time set as rain started to pour down. Ericsson just about hung on to 10th as Grosjean took the condition prevailing to full use and finished 5th. 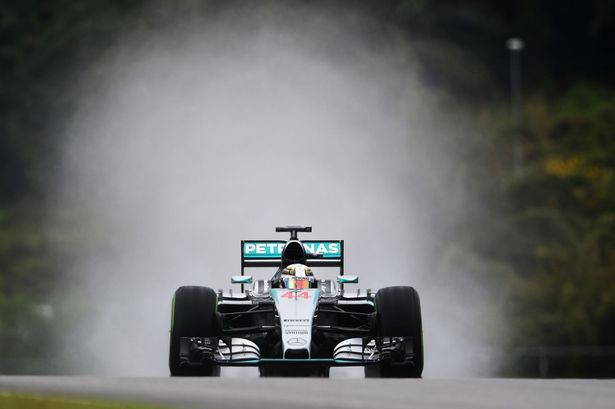 Q3: The top ten shoot out was delayed by 15 minutes due yo the heavy downpour. As the rain eased off it appeared to be anyone’s game now. The silence broke when the cars came out of pits for the final showdown. Bottas and Massa lined up first ahead of Ericsson, Vettel, Riccardo and the rest with some choosing full wets whilst the rest strapped on inters. Bottas abandoned his lap as Williams found out that inters were much faster. Ham 1:49.834 Ros 1.3 sec ver vet kvy eri Ric … Vettek moved up to third on his next flying lap as both Williamses tried out their fast laps. Ricciardo improved his time to go two places higher while Vettel did a purple sector 1 and crossed the line seven hundredths down on Hamilton to split the Merc pair. Hamilton couldn’t improve on his lap but it was good enough for pole in his 150th GP. Rosberg struggled in his final flyer to only end up third ahead of the Red Bulls Ricciardo and Kvyat. Verstappen made history by becoming the youngest driver to finish sixth in qualifying in front of Massa, Bottas, Grosjean and Ericsson.