Everybody Bites The ‘Duster’!

“Why not a Duster?” – was what I had to hear a lot. My crew insisted that we take the Duster for a road trip. We’ve already spent a week with this car in Chennai earlier. I was left impressed with its robust looks and amazing ground clearance. It is compact and efficient like a hatch. The Duster is a dainty SUV, which has proven its success in the Indian market. So then, why chose this dainty SUV for our road trip? Since a long time, we’ve been going through pictures of bikers visiting Bandipur Tiger Reserve – an amazing, adventurous place where you can find elephants and a few other animals crossing the road while driving. Also, you need to pass the Ooty hills to reach Bandipur. It seemed like a lovely idea. Visiting Ooty in this season (June), is the best option, as you encounter the best climate during the year. So, we needed something that would fit the journey. We didn’t want a 4WD, since we had no plans to get dirty in the slush, but yes, an SUV which is well capable of accommodating five adults. Thus, we chose the Duster for the trip. 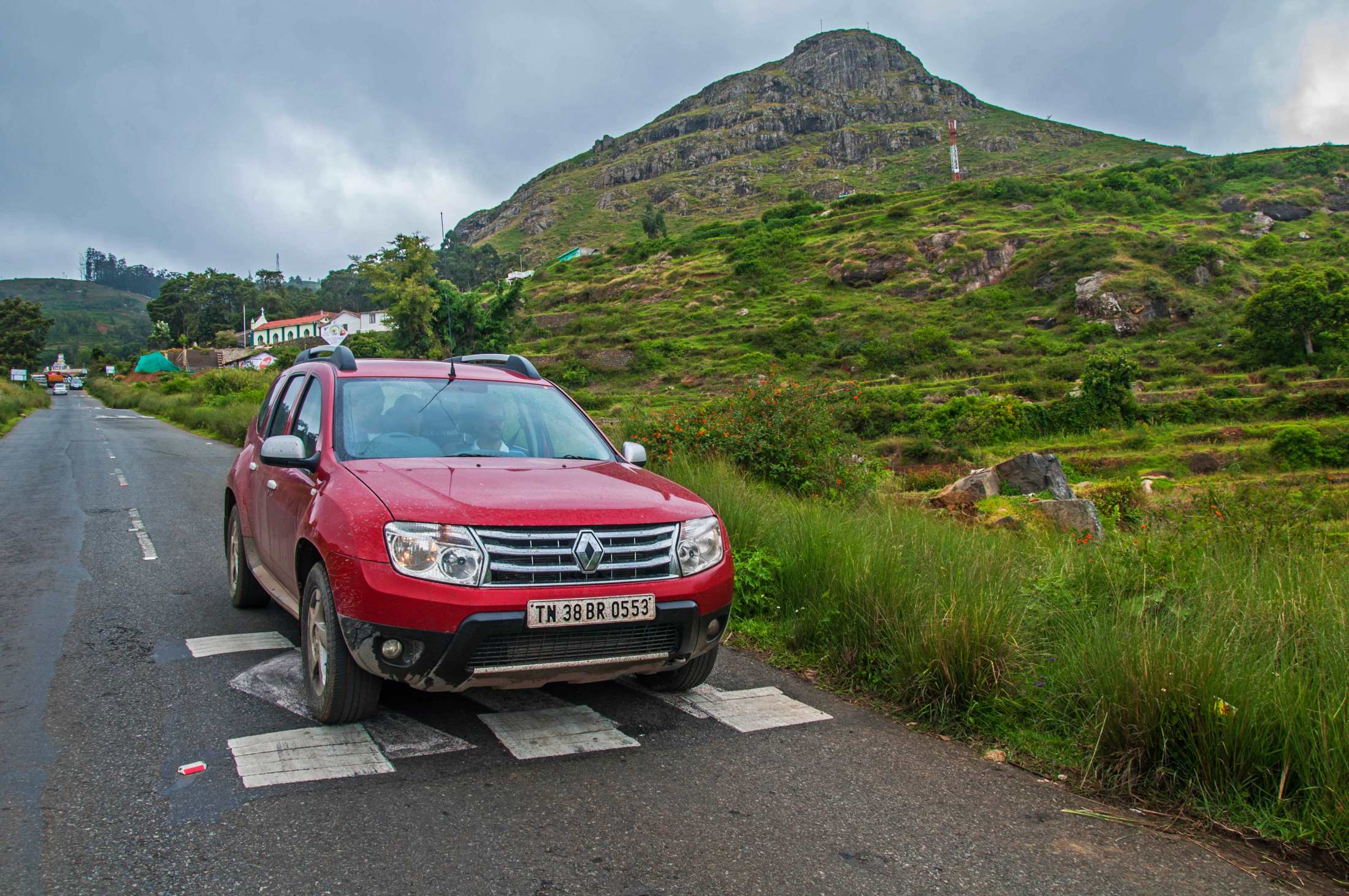 A 110PS of power is what the Duster is capable of. I’d got a message from Renault’s officials, when I requested them to arrange a car for me, from their Coimbatore showroom. Green lights flashed. We set out on a beautiful Saturday morning, and as usual, we started scratching our heads as to what the plan is. Since Shameer is based out of Ooty, he’d told us to stay somewhere in Bandipur, while we do a merry-go-round trip via Mysore. But we had loads of work to finish before the mag went in for printing, and decided to make it just a two day outing.

10 Tips before you start a road trip to Bandipur via Ooty:

1) Select an appropriate SUV for your trip, because on the hills, you’re not going to have any idea about the roads. So avoid hatches and sedans, if possible.

2) Since you’re passing via Ooty (in this season – July), we suggest you wear warm clothes. The climate will be at its best over there.

3) Road trips can never been fun without good music. Plug in an USB, with your taste of music – be it rock, jazz or some Indian stuff.

5) An early morning start will help you escape from the busy traffic inside the city, and even on the hills.

6) Make sure that your vehicle is in good condition. Check the tyre pressure, battery condition and carry along necessary certificates of your vehicle.

7) Before you start from your place, clear the trip-metre and start on a fresh note, so that you get to know a bit about the distance to the hills. In that way, you can give out some good advice to friends and family.

8) A Smart phone with internet will help you find your way through GPS.

10) Before you start – plan like you are staying in Bandipur at least for a day.

Let’s unwind the story of the Duster. Yes, this SUV can bring a smile on the occupants travelling, because they do get enough space to stretch their legs. At the start of our trip to Bandipur, all our crew members were dreaming of a big elephant chase or something more adventurous than that. The Duster went through the twisty roads of Kothagiri with ease. But it certainly has a crazy amount of turbo lag, which makes you feel awkward. Over time, the climate brought about a sudden change when we were driving through the hills, and soon, we turned off the AC. I would say Kothagiri’s roads are the best to enjoy your road trip. I’d mentioned earlier that the road to Vaalparai was the best. I was wrong, and had no idea about this beautiful, pancake-smooth highway to Ooty. Once we started nearing the freezing top of the hill, we turned the heaters on.

The hairpin bends and the Duster!

The car was given to us with a full tank of diesel. Technically, the tank capacity is 50-litres in size, but will swallow around 55-litres of diesel. We drove it to its limit, in second and third gear, but magically, the fuel metre remained full, even after we reached Ooty. I had a serious doubt whether it was working or not. After reaching Ooty, we had some nice dosas from the top of the hill, and then, drove to Shameer’s house that resides at Finger Post. Once you enter the Ooty town, you can see a huge crowd driving towards the Garden. Aren’t they fed up visiting the Ooty garden over-and-over again? And while driving, I noticed a board that read “Chocolate Museum” – something I’ve never heard of. I wanted to stop, but everyone around me started staring at me, like they don’t love chocolates. 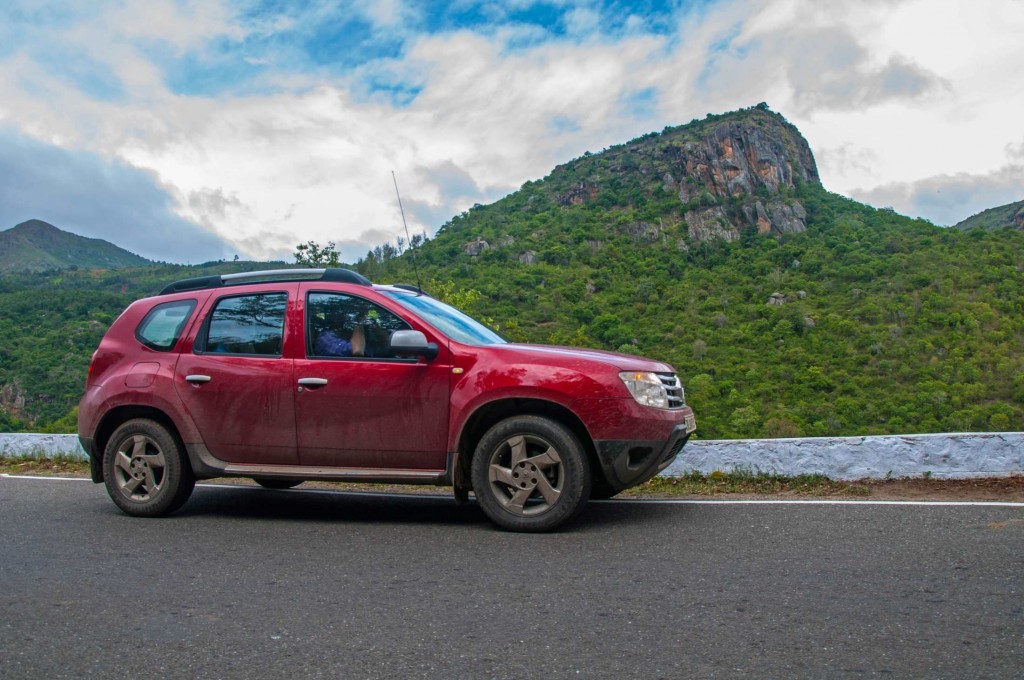 We picked up our shutterbug and started our journey to Bandipur. After leaving Ooty’s little, town you need to drive down hill, which will take you to a place called Masanagudi. There are exactly 36 hair pin bends. Perhaps the amount of straight roads was lesser than the hairpin bends. While driving, Saran was ranting about how good and bad EcoSport was, compared to the Duster. Without doubt, I’d say the Duster is a better-looking SUV than the egg-shaped EcoSport. But the EcoSport has some really nice features. The most important aspect is the 1.0-litre EcoBoost engine. Apart from all those cool features of an EcoSport , a true winner can only be rated once pitted against each other.

After driving down those 36 hair pin bends, we reached Masinagudi. Apart from the nasty turbo lag, there is a harsh vibration which is transfered to the steering wheel – from the front tires when it hits each pothole on a turn. Because of the short wheelbase, the Duster is not a perfectly stable car.
We passed Masinagudi in one-and-a- half hour, and hit a straight stretch to Bandipur. On the way, you can pass through the Mudumalai tiger reserve as well. We reached Mudumalai at around 1pm, while Bandipur was just half-an-hour away. After much patience, we reached the forest area – full of green on either sides of the road you’re on. And you’ll see Karnataka’s transport buses passing through as well. And it’s only early morning or after 5pm that you can catch a glimpse of those gigantic elephants. We spotted few wild boars and some monkeys. Unfortunately, that’s all our luck permitted us to see.

I could see a very disappointed expression on my crew’s faces, and said “better luck next time”. Bandipur is just 50km away from Mysore. If you’re planning on going for a ‘circular trip’, you can go to Mysore and drive down via Wayanad – where God’s own country exhibits some scenic beauty. Sadly, we drove back with lots of disappointments -going uphill to Ooty, and then finally, drove down to Coimbatore. The best thing, however, was driving the Duster through these amazing roads, and battling the freezing climate in Ooty. I’d say that the Duster is unbelievably efficient. Driving through the hills returned a mileage of about 18kmpl – which sounds startling, right? To say the least, the Duster packed a punch – and a very frugal one, at that.