With the refreshed Tata Safari Storme  at my disposal, I started off from Mumbai on a warm Thursday morning to savour the beautiful NH3, driving past Nashik – Dhule and onwards to Madhya Pradesh till Indore.

Indore is not just the city I like for its culture and heritage, but the city that taught me to love food – especially the type that doctors would strongly advise against. Health freak or not, we all remember our favorite eateries from our childhood-fancy restaurants we would visit with our folks, or the shabby street food stalls where we would spend all our pocket-money on, or those corner shops or thelawalas near schools where we would head to after classes, to gorge on what we then thought were the world’s best samosas or patties or golgappas. For those who converted to health-food, these are memories that either make them cringe or smile and sulk at the same time. For me, well, I have to revisit them as often as possible to stay sane! 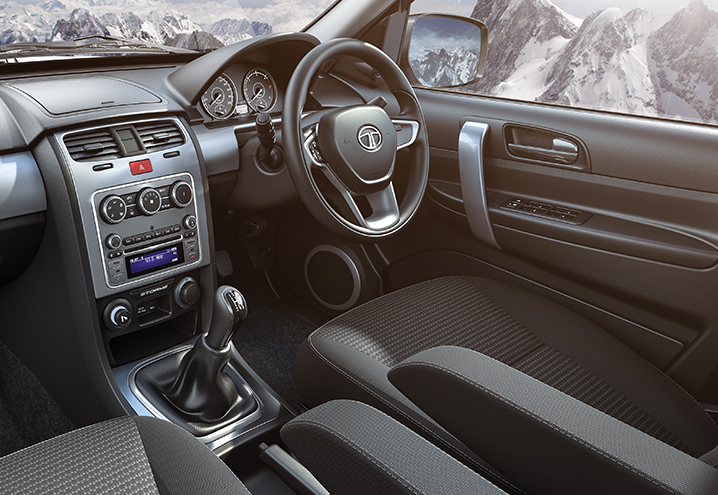 The NH3 is in superb condition, perfectly laid tarmac all the way through Mumbai to Indore, only a few bad patches just as you cross the Maharashtra border into Madhya Pradesh. The distance between Mumbai to Indore is just shy of 600 kms. Which means I had enough time to ponder over the interiors and other details of the mammoth SUV.  Once you’ve clambered into the cockpit using the side steps, made yourself comfortable in the throne-like seat, perched high above than other mortals on the road -the seats are fairly comfortable and offer enough bolstering, though you would miss the leather upholstery and electronic seat adjustments. 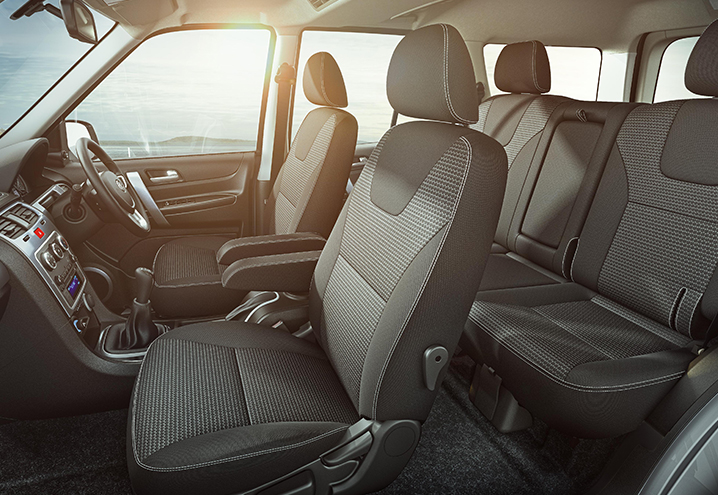 The Safari’s  second row comfort isn’t a myth, and is aided by a cavernous cabin and a planted ride quality. While rear seat comfort is brilliant, better bolstering would have sealed the deal. The third row gets just two foldable seats which aren’t that comfy for long rides.

The dashboard looks up-market with silver inserts and a java black color scheme for the plastics. You get a 2-DIN music system instead of a touchscreen unit which is a bare necessity these days. The system had us covered throughout the journey with Aux & USB ports with decent sound quality. 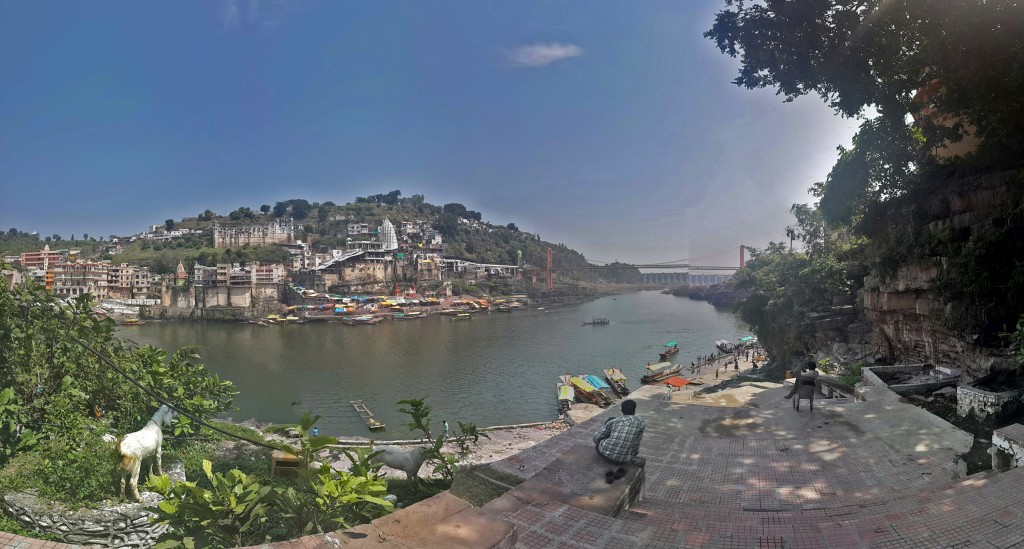 So we start off at 6:00am in the morning to avoid the traffic in Mumbai and, by 6:30, we had hit traffic at Shilphata with a long queue of trucks in front of us. But the Safari’s off-road capabilities need no introduction, so we went off-course and the car handled rough roads the way power yachts handle rough seas, chopping and speeding throughout every undulation.

Once past “Shilphata”, the roads opened up to long straights and the well laid tarmac was perfect for catapulting the behemoth to triple digits speed, but soon enough there was a problem. Having left early morning for the drive and just 2 hrs into it, our tummies started grumbling and hunger kicked in.

So we decided to stop by at a road side dhaba called “Dogra” just before Kasara ghat. This place was very famous back in its glory days for delicious Delhi style aaloo parathas coated with alarming amounts of butter and served with a bowl of yoghurt.

After having had fed ourselves and the safari getting its breather, we bolted on towards Indore after clearing the dreadful Kasara ghat. Another 50 kms later you are greeted by humongous mountains which are breathtaking enough to take pictures, though you can’t capture the scale of their size in your camera.

Treading on, we drived swiftly into hopes of catching up on a lovely sumptous lunch at “Maitrey Lawns” in Dhule, which is famous for its superb Maharashtrian cuisine and vegetarian fare. The car simply chewed up all the miles between Nashik and Dhule. The 2.2-litre VARICOR turbocharged diesel engine hums like a song and goes effortlessly without breaking a sweat. This engine makes 150 PS at 4000 rpm and 320 Nm between 1700-2700 rpm. The power gets sent via a 5-speed manual gearbox. Quite a potent mile muncher, this. 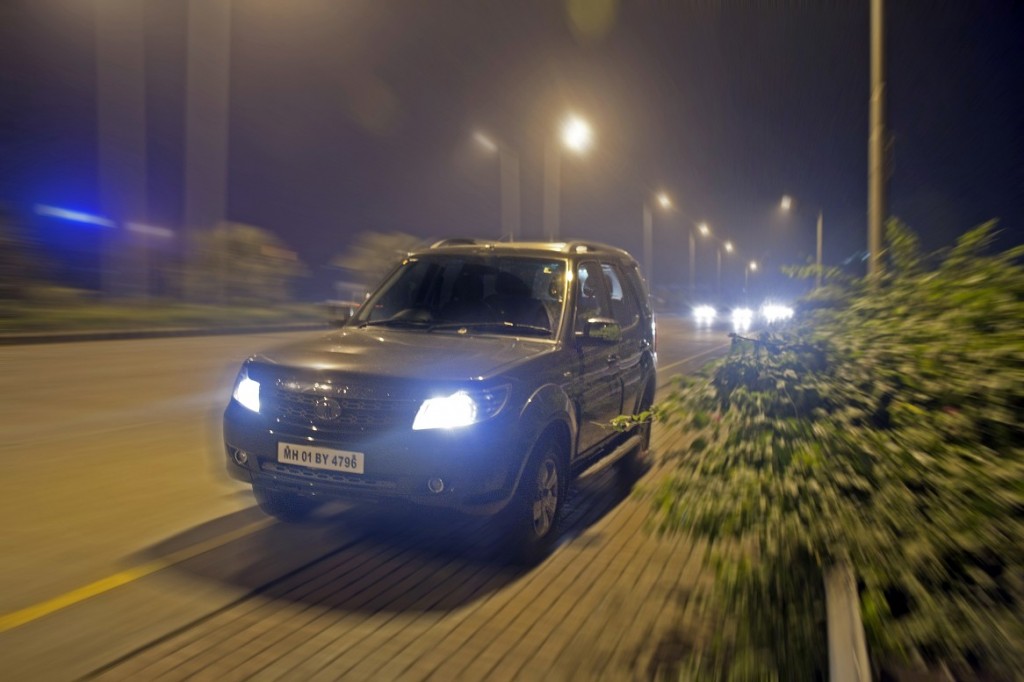 But having an off-road warlord at our disposal, I’d be lying if I said I didn’t try the 4×4 modes in this car. After having gotten bored for driving constantly over good surfaces, it was time for the monster to taste some soil. Shift it into 4L and the behemoth simply transforms itself into a totally different creature.

The Safari’s 4WD system comes with electronic ‘Shift-On-Fly’ mechanism and a limited slip differential. The long overhangs are a bit of a hindrance if you really want to indulge in some hardcore action off the road, though. A ground clearance of 200mm means that you’d be tackling rock, slush, sand and uneven terrain without having to worry.

By afternoon we were done with our 4×4 tomfoolery and retired to lunch just next to the Dhule toll booth at “Maitrey Plaza”, and post lunch we were cruising towards Indore with lovely tall mountains and various other things as our vistas. By early evening we were at the Maharashtra-MP border and truckers took their toll again in the ghat sections where the Safari managed to weave past, carving its path. 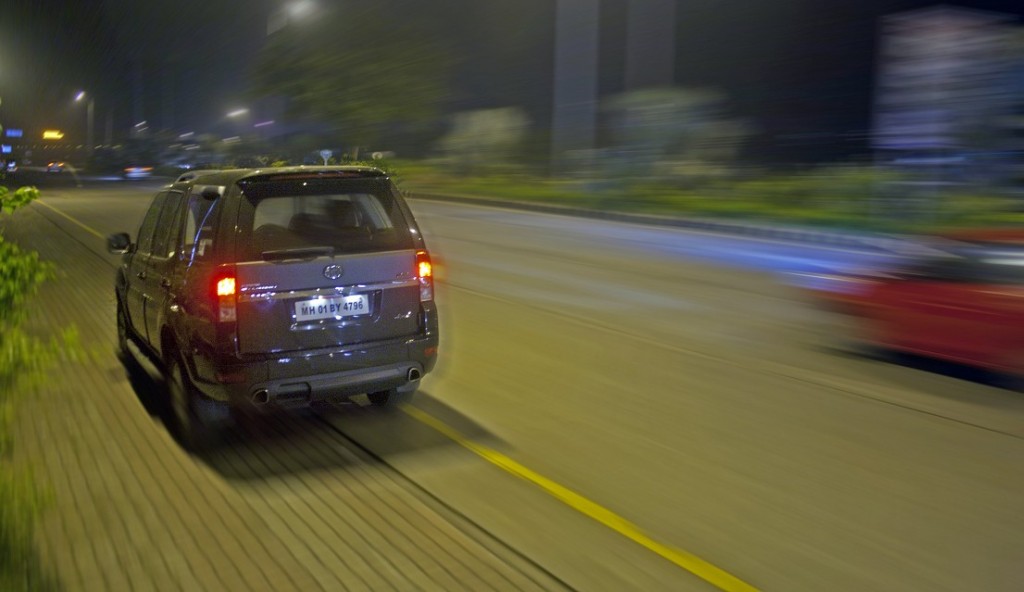 By late evening, we were nearing Indore and the roads were starting to get a little bumpier and uneven. We reached our hotels and decided to call it a day, but not before planning to chalk down a list of places to eat tomorrow. The next morning we decided to go to the local shrine at Omkareshwar which is a very picturesque place of worship, but our main goal was to grab a meal at the local town of “badwah” where a happy Sardarji uncle prepared the greatest tasting feast of our lives – all made from fresh ingredients and fresh produce from local fields.

Post lunch, we returned back to our hotel only to freshen up and leave for the iconic “Chappan (56) Dukaan street, which is a legendary place to satiate your taste buds. From the legendary Indore Poha to the Paani Patashe to Benjo at Johnny rockets to bhutte ki kees to kachori and many other deep fried delights. 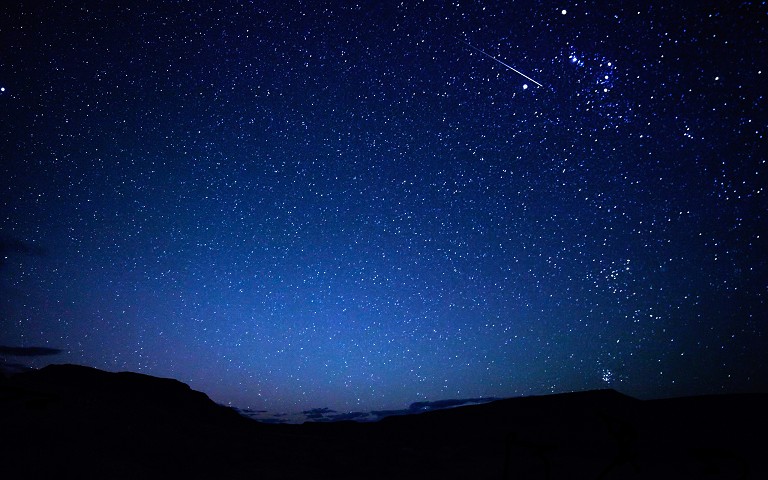 Indore is a paradise for foodies, and I’m more than happy to have made it to the place. I loved my temporary companion – the most competent SUV tackling various terrains, being comfortable and cocooned on a throne, amidst the air-conditioning that kept us cool; the Safari has an apt name that needs no second thoughts.