Infiniti, one of the fastest growing premium automotive brands in the Middle East today unveiled the regional debut of four models during an exclusive press conference at the 13th edition of the Dubai International Motor Show.

“The Dubai International Motor Show is without a doubt the leading exhibition of its kind in the region. As a premium automotive brand, it is the perfect platform for us to introduce key products to the market,” said Juergen Schmitz, Managing Director, Infiniti Middle East.

“This year, we have the largest volume of news in the history of Infiniti in the Middle East. This is testament to the success we have had, as we look forward to further building on this solid platform.”

From a business perspective, Infiniti has been firing on all cylinders in the region. In the first 10 months of the year (Jan – Oct) the brand has delivered almost 7,000 units to customers in the region at a growth rate of 20% amounting to a pace that is several times the pace of the premium market.

Schmitz added: “The vehicles we have on display showcase two key stories – the first being Infiniti’s pioneering design story as inspired by the Q80. The second message is how this design influence has been cascaded down to our soon to be produced Q60 concept as well as the production versions of the QX50 LWB and Q30.” 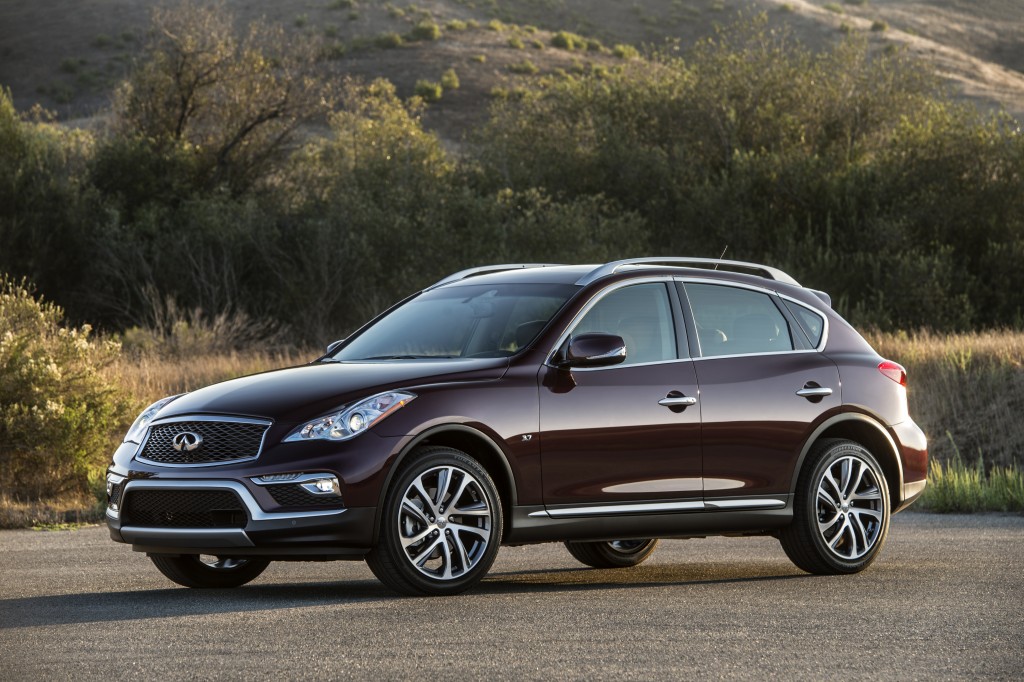 From an exterior design perspective the QX50 LWB has been enhanced for 2016 with a new front and rear bumper and lower front and rear fascia, new LED Daytime Running Lights, new signature Infiniti-style double-arch front grille, new side mirrors with integrated LED turn signals and  updated side sill styling.

Significant inroads have also been made on its size. The wheelbase increases by 81mm whilst overall length is boosted by 114 mm. The result is an increased interior volume by 235 litres as well as increased 2nd row – rear legroom by 109 mm.

The QX50 LWB also features a host of technological advancements that include; Streaming Audio via Bluetooth® wireless technology, Advanced Around View® Monitor (AVM) which includes front and rear sonar, 7-inch colour display with Infiniti Controller. Also available is the optional includes the Infiniti Hard Drive navigation System with a colour touch-screen display that is additionally complimented with the Bose Premium Audio System with 11 speakers.

Q30 makes a daring visual statement through its sculpted, concept-car exterior, unconventional stance and asymmetric cabin design. The car has been engineered to exacting standards to deliver a driving experience that is unmistakably Infiniti.

The development teams behind the Q30 have taken a holistic approach to its engineering, presenting a car that offers exceptional ride and handling. It feels comfortable yet ‘ready to go anywhere’ thanks to the versatile dimensions, confident dynamics and intuitive technologies.

The Q30 launches in the Middle East in the second quarter of 2016 and will be available with 1.6L or 2.0L Turbo in a 2WD configuration. The 2.0L Turbo will also be offered with an optional AWD drivetrain.

The Infiniti Q60 Concept, is an original and bold reinterpretation of an elegant lifestyle 2+2 coupe. Infiniti designers wanted to create a sports car that is power and performance personified. They gave the Q60 Concept taut lines, razor-sharp edges, and strikingly deep recesses in the body sides – culminating in a potent road presence.

The Q60 Concept’s sleek and aerodynamic design is anchored by its deep double arch grille, whose elaborate waved mesh pattern gives it a three-dimensional quality.

From the grille, the flowing character lines rise and merge into the headlamps, drawing attention to the intelligent LED lights. The same refinement on the outside extends into the smallest detail on the inside, evoking a premium atmosphere with three-dimensional textures and meticulous craftsmanship.

The Q60 will be produced globally in 2016 and will be offered with the next-generation 3.0-liter V6 engine with direct injection and twin-turbocharging.

Initially unveiled at the Paris Motor Show in 2014, the design language of the Infiniti Q80 Inspiration forms the design DNA blueprint for Infiniti’s existing and future models.

On the Q80 Inspiration concept, the organic and three-dimensional grille functions much like the pulsing gills of a cruising shark, opening and closing to control air flow into the engine. Infiniti’s hallmark headlight takes after the human eye, with the horizontal lighting signature intersecting across a third of the projector, giving the headlamp a stare that is both inviting and intense simultaneously.

Another design feature special to Infiniti is the crescent cut C-pillar, which draws creatively from the first or last phases of the moon when only a sliver is visible. It has also evolved from a stylistic flourish to become an integral part of the vehicle structure.