American rally legend and Gymkhana superstar Ken Block was on hand to help reveal the Ford GT, an ultra-high-performance supercar that serves as a showcase for innovation in technology, including the latest in EcoBoost performance, aerodynamics and lightweight carbon fibre construction. The all-new GT supercar features rear-wheel drive, a mid-mounted engine, and a sleek, aerodynamic, two-door coupe body shell. It is propelled by the most powerful EcoBoost production engine ever built – a next-generation twin-turbocharged EcoBoost V6 producing more than 600 PS. Making its regional debut in Dubai, the GT supercar features advanced lightweight composites, which will be seen on Ford’s entire future product line-up. Based on the same race-proven engine architecture serving Ford’s IMSA Daytona Prototype endurance racing efforts, the next-generation twin-turbocharged 3.5-litre EcoBoost V6 in the GT features a wide power band with impressive time-to-torque characteristics. Aerodynamic efficiency is at the heart of the GT design, actively reducing drag while aiding downforce and stability. The state-of-the-art chassis is suspended by an active racing-style torsion bar and pushrod suspension, with adjustable ride height. 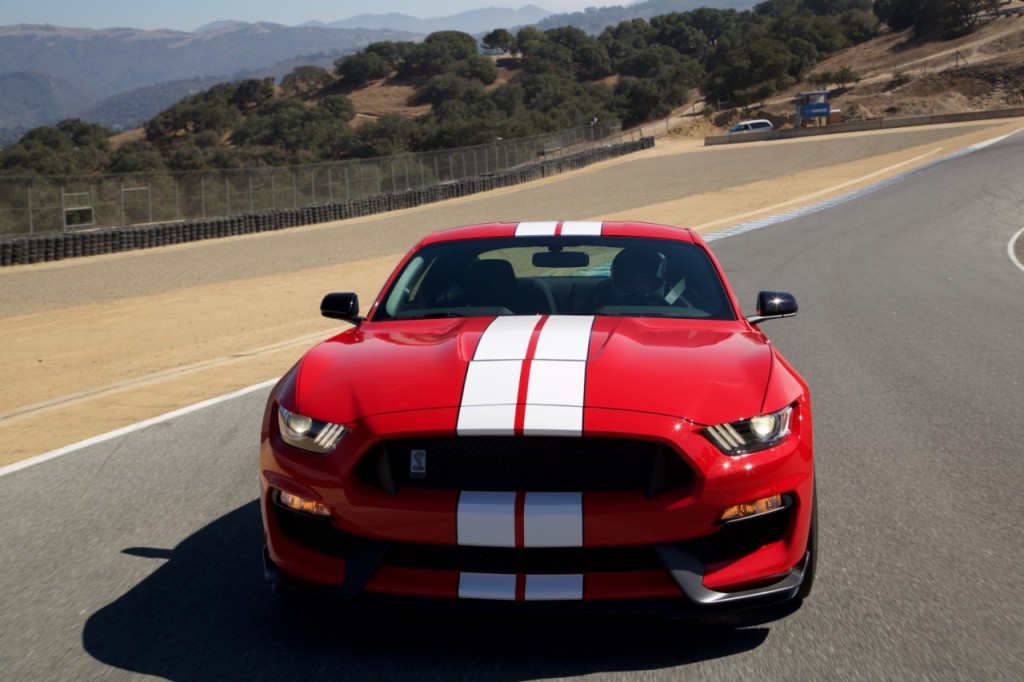 Making its global debut and with a stunning Race Red paintjob – the first time this colour has been seen on this Mustang anywhere in the world – the GT350 is powered by a unique, high-revving flat-plane crankshaft 5.2-litre V8 engine, which produces 526 PS and 429 Nm of torque, the most powerful naturally aspirated Ford production engine to date. The GT350 makes use of extra-stiff 19-inch aluminium alloy wheels – 10.5 inches wide at the front, 11.0 inches at the rear – clad in state-of-the-art Michelin Pilot Super Sport tyres with GT350-specific sidewall construction, tread face and compound. 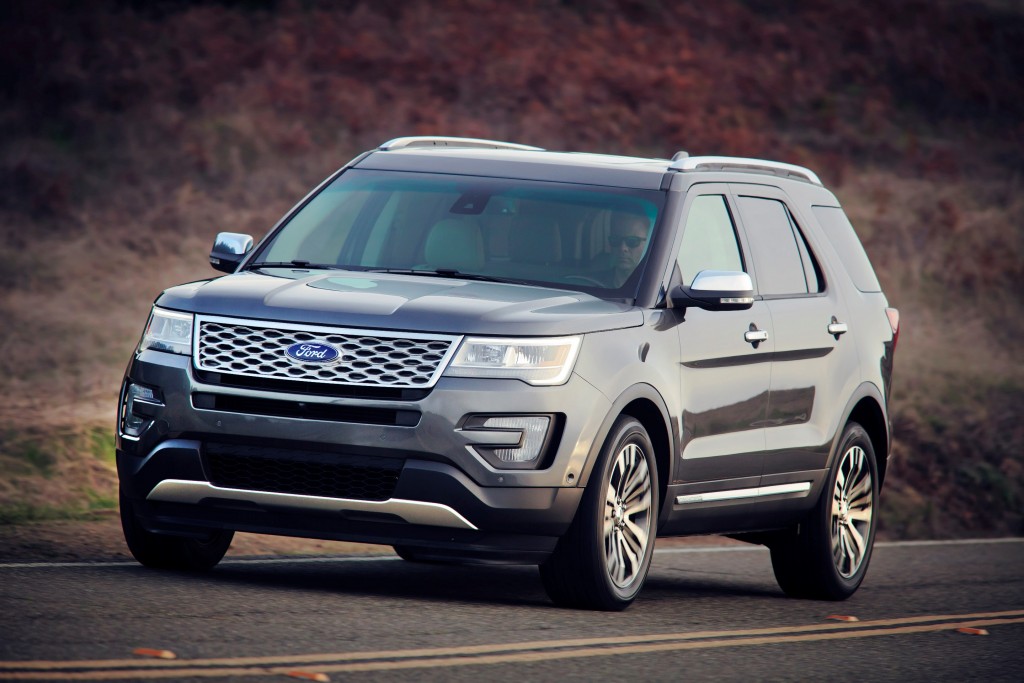 On the back of having sold more than seven million Explorers models worldwide, and building on 25 years of innovation and sales leadership, the new 2016 Ford Explorer has arrived in the Middle East with even more smart technology. The standard 3.5-litre V6 engine for base, XLT and Limited models – with 294 PS at 6,500 rpm and 346 Nm of torque at 4,000 rpm – is paired with a six-speed SelectShift Automatic transmission. The Explorer Sport gets a standard 3.5-litre twin-turbocharged EcoBoost V6 making 370 PS at 6,500 rpm and 470 Nm of torque at 3,500 rpm – also mated with the six-speed SelectShift. Explorer’s intelligent four-wheel drive reassesses conditions about 20 times faster than the blink of an eye – providing precise handling and traction.

The original crossover utility vehicle from Ford is loaded with more technology, higher levels of craftsmanship and greatly improved vehicle dynamics. Based on Ford’s successful, global mid-size vehicle platform, the Edge has been reimagined with a stronger, more athletic shape. The popular vehicle has been retooled to meet higher expectations for quality, and re-engineered to add more features and technologies for a more rewarding driving experience. The all-new Edge will feature three engine options, including a standard twin-scroll 2.0-litre EcoBoost four-cylinder and a 2.7-litre EcoBoost V6. A normally aspirated 3.5-litre V6 engine will also be offered. All will be equipped with dual exhaust and a six-speed automatic transmission. The 2016 Edge will be available in four trim levels, including SE, SEL, Sport and, for the first time, a top-of-the-line Titanium series to meet market demand for more premium offerings. 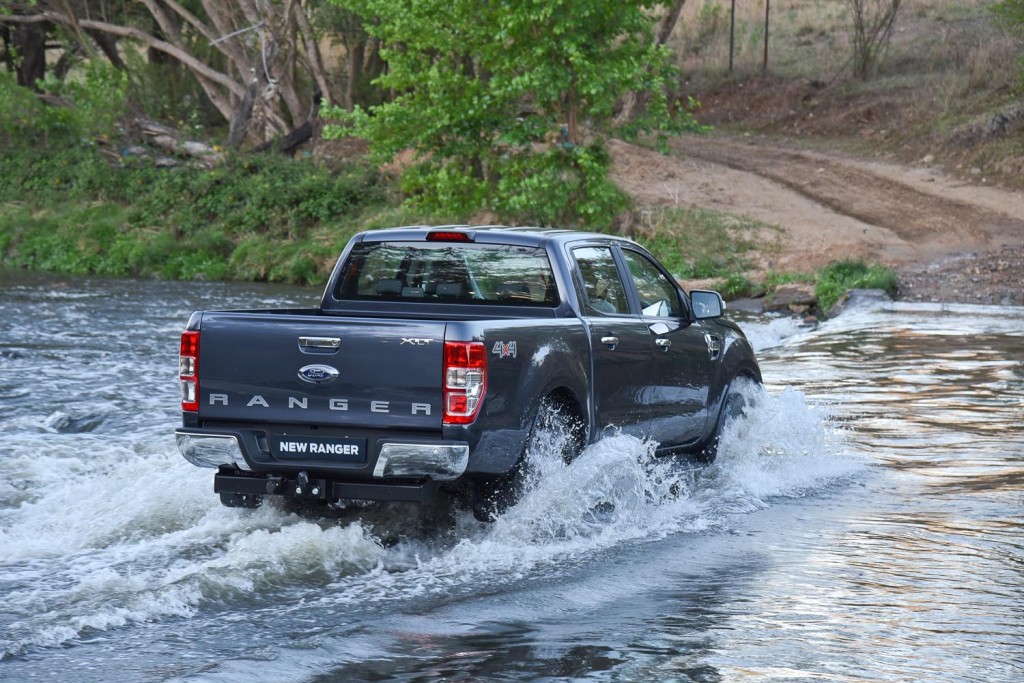 Ford Ranger is undoubtedly one of the company’s best performers in the Middle East and Africa in terms of sales, and to mark the Wildtrak clearly as the flagship of the Ranger line-up, designers worked to emphasise its tough, sophisticated design. Flanked by projector head lamps, the bold trapezoidal grille with strong outboard nostrils is finished in a dark, liquid metallic grey. The same accent colour continues to the side mirrors, door handles, side air vents, bed rails and tail lamps for a dark, sporty appearance. The latest generation of Ford’s globally proven 3.2-litre Duratorq TDCi five-cylinder diesel engine powers the new Wildtrak, and enables its impressive capabilities. The engine features upgrades including an updated exhaust gas recirculation system to help improve fuel efficiency by up to 18 per cent. It is paired to a six-speed automatic transmission, carefully calibrated to maximise performance, refinement and efficiency. 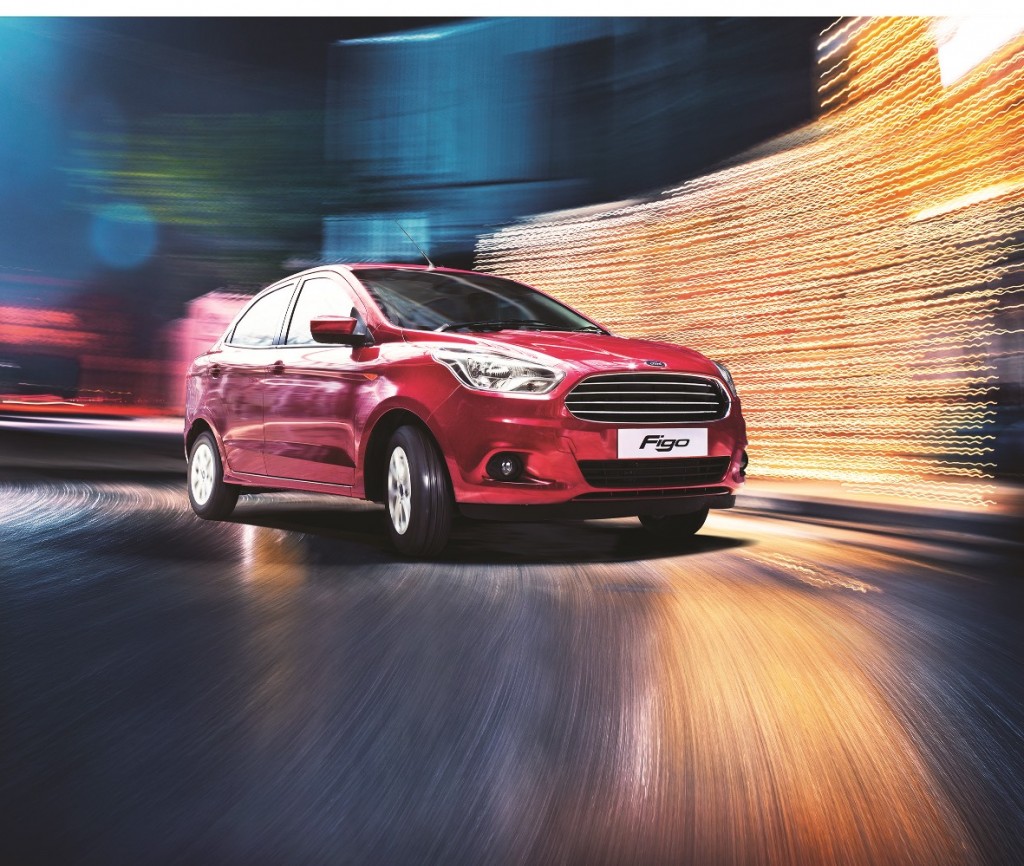 Aside from the one-of-a-kind #GraFigo on display at the Dubai International Motor Show, the Ford stand will be home to the new for 2016 Figo, which offers revised levels of sophistication, smart technology and safety in a compact saloon. The Figo is the first compact saloon with standard driver and passenger airbags to help protect occupants in collisions and with up to six airbags available for even greater protection. A refined and sophisticated new 1.2-litre Ti-VCT petrol engine is optimised for both maximum power delivery and real-world efficiency, and puts out 88 PS of power, and 112 Nm of torque at 4,000 rpm. For the ultimate combination of performance and fuel economy, the Figo is also available with a 1.5-litre Ti-VCT petrol engine, offering an impressive 112 PS of power and 136 Nm of torque at 4,250 rpm.

The Dubai International Motor Show (November 10-14, 2015) is the pre-eminent auto show in the Middle East, and grows larger, and more influential, with every edition. On display at the Ford stand, (no. 115, located inside Hall 1 at the Dubai World Trade Centre) will be the Middle East Car of the Year 2015 Award winner – the Ford Mustang.

The six vehicles are part of an aggressive product launch plan in Ford’s newest business unit, Middle East and Africa (MEA), pledging to deliver at least 30 new vehicles by 2020 to MEA markets as part of a new regional strategy.