By the time I had dropped the Scrambler back at Bangalore, the biker bug bit me and I couldn’t resist but ask the Ducati officials if they can lend me any other bike for a week long test. Surprisingly they handed over something as dark as black – the Monster 821 Dark! Back when I was in school, there would be a short scene for the Ducati Monster in almost every Hollywood movie. May be that’s why the idea of a Chaya ride came up in my mind – where I will be able to ride this dark Monster across the length and breadth of South India.

What is Chaya? It is the Kerala version of tea and we Malayalees just love it for no reason. Whether it’s early in the morning or late at night, the urge to drink tea has no specific reason. We get tea everywhere across the globe, but who makes the best tea? Ask a Malayali and he will point out the nearest roadside tea stall. The roadside Chayakkada offers you the best tea! As they say, it is the best place to unite, make friends and listen to a lot of gossip.

We have two alternative routes to reach Palakkad. We took the best and fastest route which is via Salem.

Just to give you a glimpse of my ride, the nearest entrance to Kerala from Bangalore is via Tamil Nadu. The total distance comes close to 450Kms and we get to enter into Palakkad; the biggest district in Kerala.

The Ducati Monster was introduced in the year 1993 and now we are riding the third generation model. The Monster is available with two engine options – 1198 cc and 821 cc. The Ducati Monster 821 is powered by the same second-generation 821 cc Testastretta 11-degree engine found in the Ducati Hypermotard. It makes a peak power of 112hp at 9250 rpm and 89.4 Nm of torque at 7750 rpm. After the Monster 1200, the 821’s is the second motor to get liquid-cooling.

Having given a small intro about the naked beauty, let’s get back to the ride. I started from Bangalore by 8am on a Sunday morning. Since it was a Sunday, there was nothing to worry about the traffic. Even though if it had been a busy day, once you hit the Electronic City flyover, you get past the hustle and bustle of the city in just 10 minutes and that’s usually at the tollbooth.

The Monster comes with three riding modes: Sport, Touring, and Urban. Touring and sport both provide the full weight of the 112-horsepower motor, with sport offering quicker throttle response to help you access that power with a little less twist of the wrist. Urban limits power to 85 hp and decreases throttle response, which I found to be perfect for both wet conditions and manoeuvring through dense city traffic. 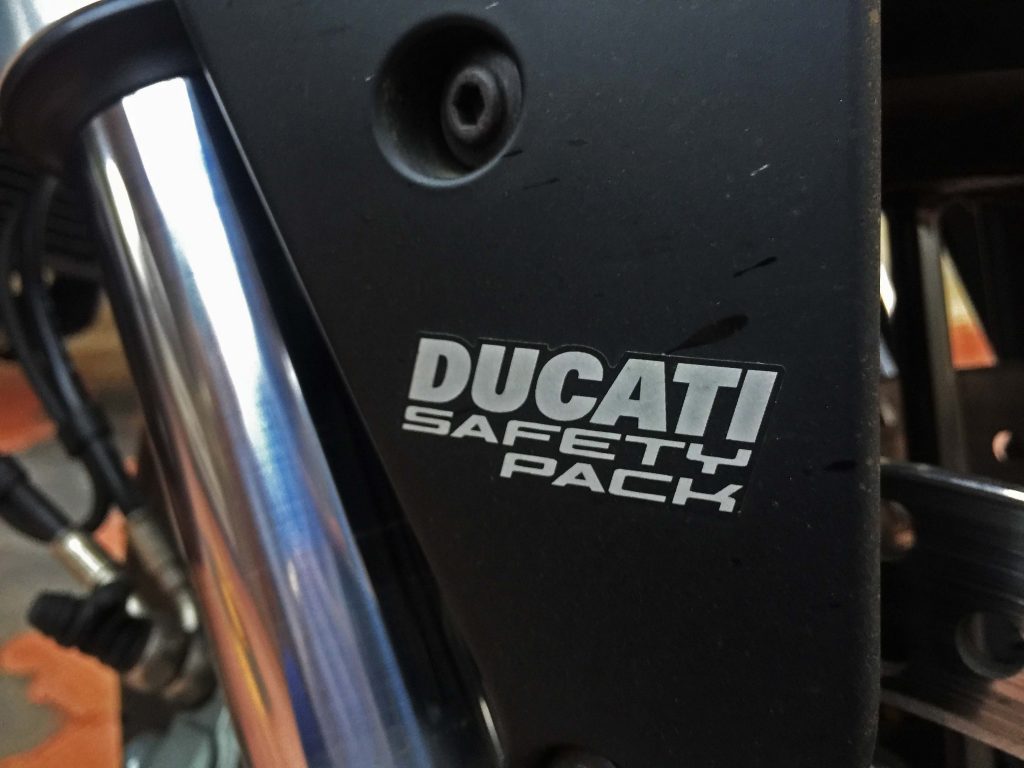 The Monster also gets Ducati’s Safety Pack (DSP), which brings three-level ABS and eight-level Ducati Traction Control (DTC). The different riding modes also come with different presets for both ABS and DTC, which can also be adjusted.

I was riding in the Urban mode and made a quick shift to the Touring mode when I stopped at the toll booth. As said earlier, Touring mode offers progressive throttle response which gives you a bit of a relaxed riding experience rather than the more aggressive Sport mode. As the roads open up, it’s a joy to ride the Monster. As you cross Hosur, the road gets even wider and needless to say it’s time to test the angry Sport mode. 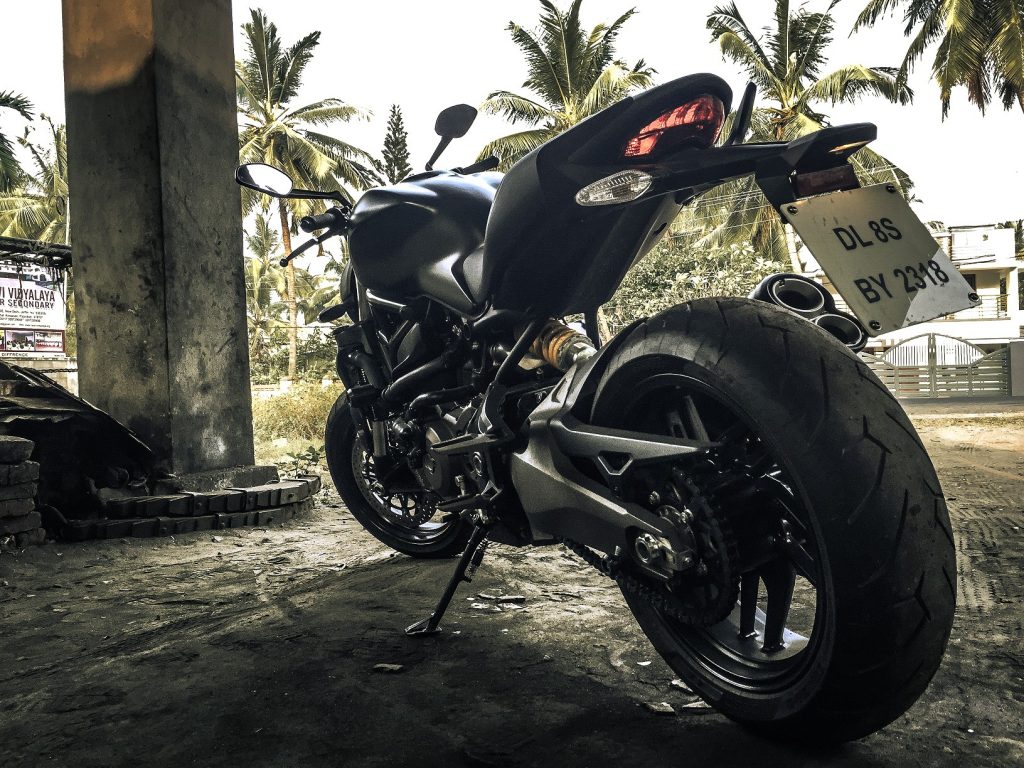 The exhaust note pops and crackles, making me as happy as a kid watching Tom & Jerry while playing with the 112 fire-breathing ponies, and it was nothing short of mental! The large muscular 17-litre fuel tank, the Trellis frame, minimal styling along with that gorgeous stance, you get a fan following at every signal and Chayabreak.

The large Pirelli Diablo Rosso II tyres and the muscular rear end add sportiness. The instrument cluster is an LCD unit. The Monster 821 uses an inverted 43 mm Kayaba fork in the front and a single Sachs shock at the rear. The front isn’t adjustable, but the rear is adjustable for spring preload and rebound damping. 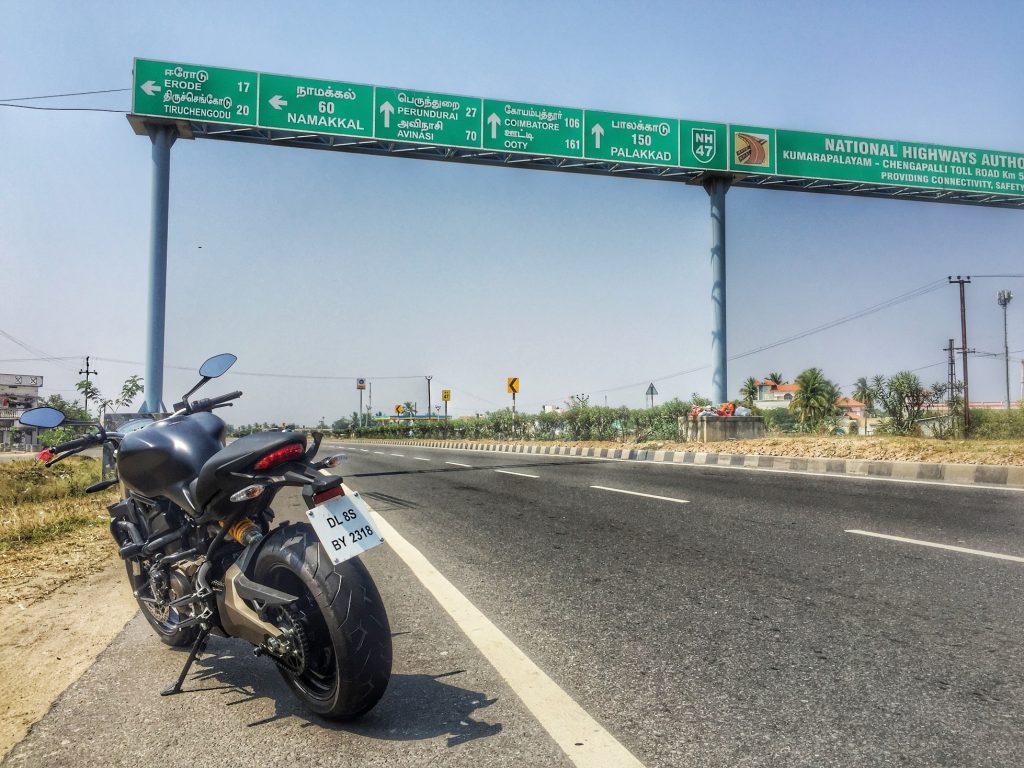 While I continue the Chayaride, with each mile, I got more comfortable with the bike. I had decided that I won’t be stopping for anymore tea until I reached Kerala. My estimated ride time was approximately 6-7 hours. I realised that I haven’t taken a break for the last 250kms when the low-fuel indicator lightened up and I refilled from a fuel station in Salem while I had to manage quite a big crowd asking for a picture and the price of the bike.

Surprisingly the ride from Salem to Palakkad was even more  quicker as I was able to manage an average speed of 140kmph throughout the ride. The acceleration of the bike is blisteringly fast and it hits 100kmph in just under 4 seconds and goes all the way up to 170kmph without any fuss. While you will face a bit of unbalance because of the wind forces at higher speeds which is common in naked bikes; where the 205kgs of the bike helps you feel planted on the road. The top speed of the Monster 821 is said to be 225kmph. 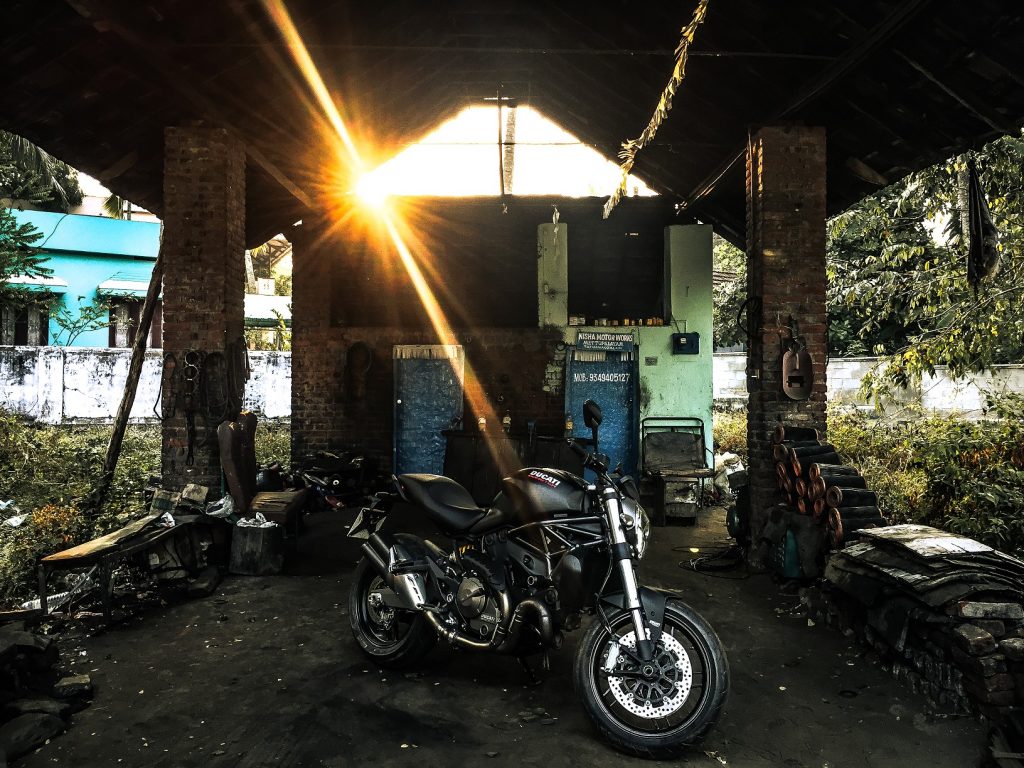 As they say, two wheels move the soul! I haven’t felt a 500km ride so much quicker and easy on two wheels. I entered God’s own Country and reached Palakkad within just 5 hours! I was surprised with the abilities of the Monster even though we have heating issues in start/stop traffic, which is again common in a superbike. 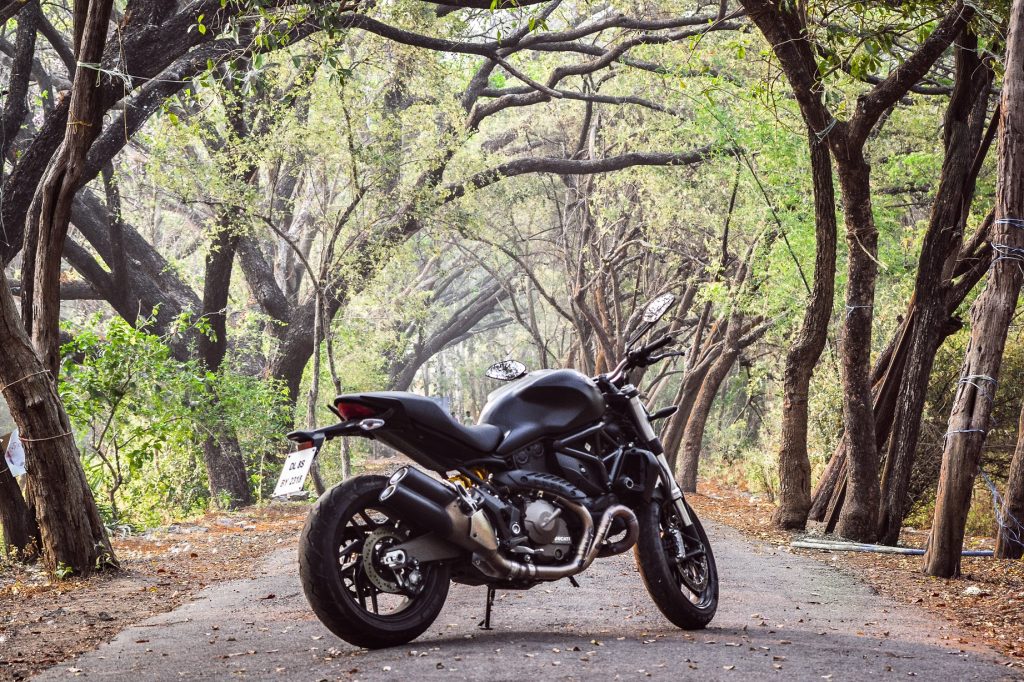 The Monster 821 offers the best of both worlds, be it sport or touring. Here I am in Palakkad city, with the Monster searching for the best roadside tea shop to taste the best tea. After 500kms of riding the Monster, I am still good to ride another 500kms! Maybe it’s just the bike, really…

Time for a cup of tea!

The Monster 821 Dark is priced at: