Royal Enfield, the fastest growing motorcycle brand in the world, participated at the fourth installment of the Wheels and Waves festival; Europe’s landmark surfing and motorcycling event, between 8th – 12th of June, 2016 in Biarritz, France. With its fine blend of motorcycle mechanics, vintage themes, surfing, art and music; Wheels and Waves is one of the most anticipated events in the custom motorcycling scene. Royal Enfield participated in this event for the third time displaying its full range of motorcycles along with two exclusive renditions called Mo’ Powa’ and Dirty Duck.

Over the five days at Wheels and Waves, Maxwell Paternoster, one of the greatest motorcycle-influenced artist brought his art to a Royal Enfield Continental GT that became his canvas for the duration of the festival. Each day saw a new panel of the motorcycle come to life under the magic of his artistic touch. True to the spirit of festival, the Royal Enfield Marquee at Wheels and Waves was nothing short of the dream garage that every motorcycle customiser wants. On display were the two custom motorcycles made, for the very first time, by the brand itself and the finest Royal Enfield customs from all of France.

Additionally, a historic collection of the finest art from Royal Enfield’s rich motorcycling heritage was on display at Docks de Pasajes for the limited duration of Wheels and Waves 2016 alongside a wide collection of motorcycle and surfboard art and photograph. The showcase of Royal Enfield advertisements collected over several decades was a moving timeline of the motorcycling eras that have passed by. Each display was a reminder of the one absolute constant in motorcycling –having fun!

Mo’ Powa’
Mo’ Powa’ is Royal Enfield’s rendition of a Dragster-meets-Mad Max motorcycle that exploits ‘built-in survive anything’ characteristics of any Royal Enfield. It was decided to add a brutish appeal to the Classic 500 without losing the beauty of its traditional form. 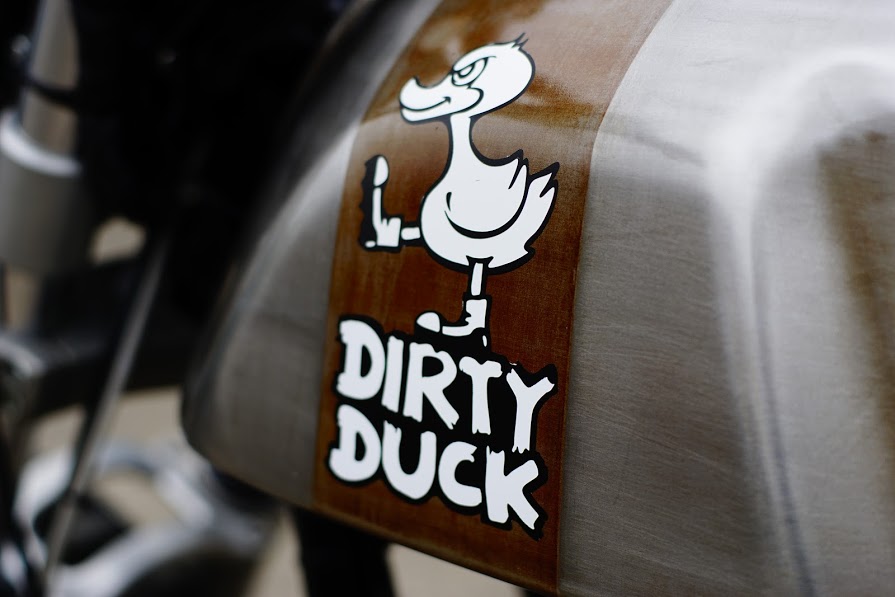 The most exciting part, of course, was to add the ruthless touch of a Mad Max with a turbo charger. The stunning, custom-built exhaust has been fabricated by hand at Harris Performance. This is a motorcycle that can be pushed to the limits on the track but will be equally appreciated for its elegance off it.

What machine says “Survive Anything” more than a Jeep or Land Rover Defender in its characteristic rough metal with a big ol’ snorkel sticking out the top? The Dirty Duck is Royal Enfield’ interpretation of the very same idea in a motorcycle form. The existing angular forms and rigid frame of the Continental GT worked perfectly for conveying this idea of utilitarian toughness. The addition of the hand fabricated snorkel completed the look and ability to go anywhere on land or in water giving it the name – Dirty Duck

The fuel tank has been naturally rusted to tell a tale of its long life of surviving adventures and at the same time, make it obvious that one should not feel bad about dropping or hesitate from pushing the Dirty Duck to its absolute limits. The snorkel is without a doubt the highlight of this motorcycle which has been hand crafted by the extraordinary craftsmen at Harris Performance.