Bursting with more power, refined design and increased efficiency, the new Porsche 911 range has arrived at in India showcasing cutting-edge technological advancements in what is the most highly evolved 911 to date.

Now available in a range of model variants including coupe and cabriolet, the new 911 features entirely new turbocharged power units evolved from the racetrack to the road, as part of Porsche’s commitment to technology transfer. This gives the world’s best-selling sports car a boost in performance alongside significantly improved fuel economy. On the exterior, the new 911 impresses with an evolutionary yet further sharpened design, while inside it features the new Porsche Communication Management (PCM) system delivering improved connectivity and controls.

Advanced over more than 50 years, the brand icon is the heritage model from which every Porsche stems. Having been developed and proven on the most challenging circuits of the world, the 911 is the sports car which has won more races than any other but seamlessly balances exceptional everyday usability.

Speaking at the launch event of the new 911 range, Pavan Shetty, Director Porsche India, commented: “With its unique success story, the Porsche 911 is a car that has achieved iconic status over the decades and we are immensely pleased to be sharing its latest evolution with our enthusiasts and customers here in India. This model represents standard-setting sports car performance along with the convenience of everyday usability, all packaged in a legendary design. Thanks to the extensive range available right from the start, there is a 911 for every driver with each type boasting one overriding trait: pure Porsche performance. The innovations, which allow each version to deliver even more power but with increased efficiency, are nothing short of ground breaking and further extend the 911’s position as a segment leader.”

The Carrera models feature a completely new engine generation with bi-turbo charging, which set the benchmark in terms of performance, driving pleasure and efficiency. Across the range, a gain of 20 hp has been achieved, despite a fuel reduction of up to 1.0 litre per 100 km. 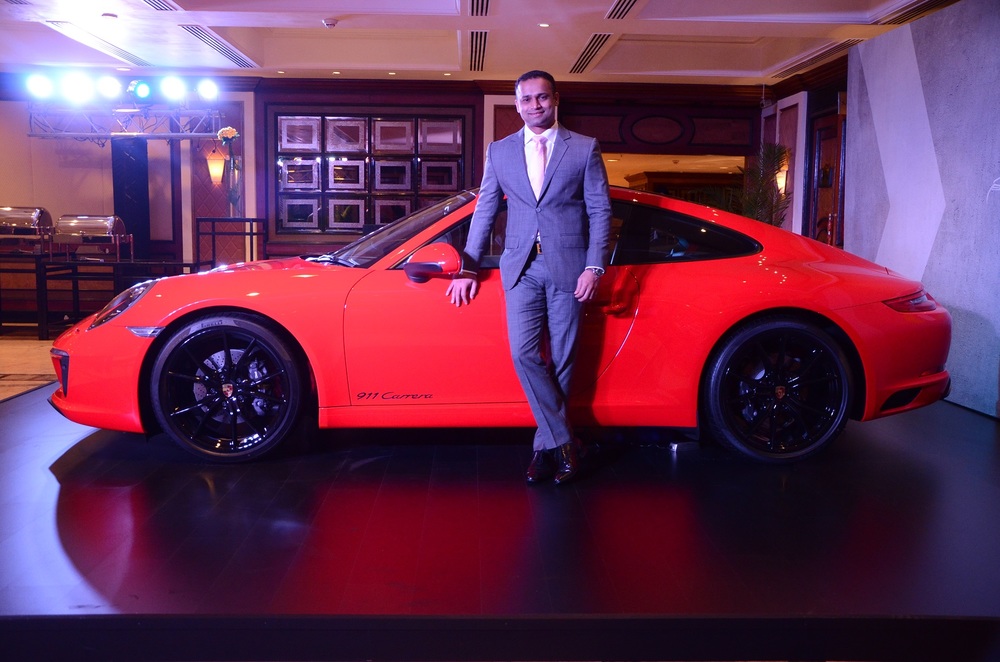 911 Carrera models
The new 911 Carrera produces 370 hp, whilst the 911 Carrera S delivers 420 hp, thanks to a combination of turbochargers with modified compressors, enhanced exhaust system and tuned engine management.

Sprinting from zero to 100 km/h in 4.2 seconds, the new 911 Carrera is two tenths of a second faster than its predecessor. The 911 Carrera S with PDK and Sport Chrono Package performs its showcase discipline in just 3.9 seconds.

Rear-axle steering, which for the first time is available as an option for the Carrera S models, considerably increases the overall dynamics of the vehicle. Taken from the 911 Turbo and 911 GT3, stability is noticeably increased when the front and rear wheels are turned in the same direction starting at a speed of 80 km/h. At speeds of up to 50 km/h, the wheels are turned counter to one another for improved agility. This technology also enables better manoeuvrability in city traffic thanks to the vehicle’s turning circle being reduced by 0.4 metres.

911 Turbo models
Regarded as the top athletes in the range and thanks to a 3.8-litre six-cylinder bi-turbo engine, the 911 Turbo now delivers 540 hp, with the coupe model sprinting from zero to 100 km/h in 3.0 seconds. The gain of 20 hp has been achieved by modified inlet ports in the cylinder head, new injection nozzles and higher fuel pressure. Top speed in the new 911 Turbo is 320 km/h, 5 km/h faster than the previous model.

Meanwhile, the 911 Turbo S develops 580 hp thanks to new turbochargers with larger compressors. It is also the first production 911 to accelerate to 100 km/h in less than three seconds, reaching the milestone speed in 2.9 seconds. The model’s top speed is 330 km/h, 12 km/h higher than its predecessor. The breath-taking figures are a result of Porsche still being the only manufacturer to employ turbochargers with variable turbine geometry in a petrol engine.

Sure to excite Porsche enthusiasts are the refined exterior features of the new 911 models, which further enhance its iconic character. They include new headlights with four-point daytime running lights and a redesigned rear lid with vertical louvres, as well as distinctive four-point brake lights.

In conjunction with the optional Sport Chrono Package and for the first time, all 911 models now have a mode switch on the steering wheel. Derived from the 918 Spyder, mode switch consists of a rotary ring with four positions for the driving modes “Normal”, “Sport”, “Sport Plus” and “Individual”. Depending on the equipment, the latter setting enables drivers to configure their own individual vehicle set-up.

In combination with the PDK transmission, the mode switch has an additional push button, the “Sport Response Button”. When this button is pressed, the drivetrain is pre-conditioned for maximum acceleration for 20 seconds, a feature that can be deployed for overtaking manoeuvres.

Meanwhile, the interior of the new models has been updated with the enhanced Porsche Communication Management (PCM) system, featuring a multi-touch seven-inch display, which offers a considerably expanded range of functions and intuitive controls similar to operating a smartphone.