Nissan brings back the iconic Datsun brand to the Middle East

Nissan Motor Company is bringing the legendary Datsun brand back to the Middle East with the launch of two new carsin Lebanon, the on-DO and mi-DO. Both models put ownership of a new car, an attainable reality for more people. More than 100 years ago, Japanese engineer Masujiro Hashimoto had a dream. He created a car that he hoped would put his country on wheels. He called it DAT, after the initials of his three main backers.

Though highly regarded, his car was too expensive to have mass appeal. But in 1931 a new small car called Datson – son of DAT – was launched and everything changed.

For the next 50 years the cars, now called Datsun, offered the freedom of personal mobility to people who had never previously dreamed of owning a new car. The cars were built in Japan and sold globally while the company that built them, Nissan, became one of the biggest automakers in the world. Today Datsun is back and, like the original Datsun, is introducing new customers to the joys of motoring.

The new Datsun cars set new standards in their market segments by combining quality and reliability with integrity and modernity, all backed by the technical know-how of the globally respected car manufacturer, Nissan.

“In creating the new range of Datsun cars, we have developed models that offer benefits of more expensive and bigger cars. By using available assets carefully and knowing what the expectations of our customers are, we have been able to build them up to their needs and preferences,” says Vincent Cobee, Global Head of Datsun. “Datsun’s aim is to turn the Dreams of aspiring customers into reality, giving them Access to a Trusted brands… just as Datsun always has done.”

The Datsun on-DO sedan is perfect for family oriented drivers, while Datsun mi-DO is for younger buyers seeking a dynamic drive. With a different look, best in class dimensions and more upscale features, Datsun mi-DO gives Lebanese car buyers even more choice in the segment. Both cars are built at the Renault-Nissan Alliance AVTOVAZ plant in Togliatti where the adoption of Alliance production methods mean quality is a given. 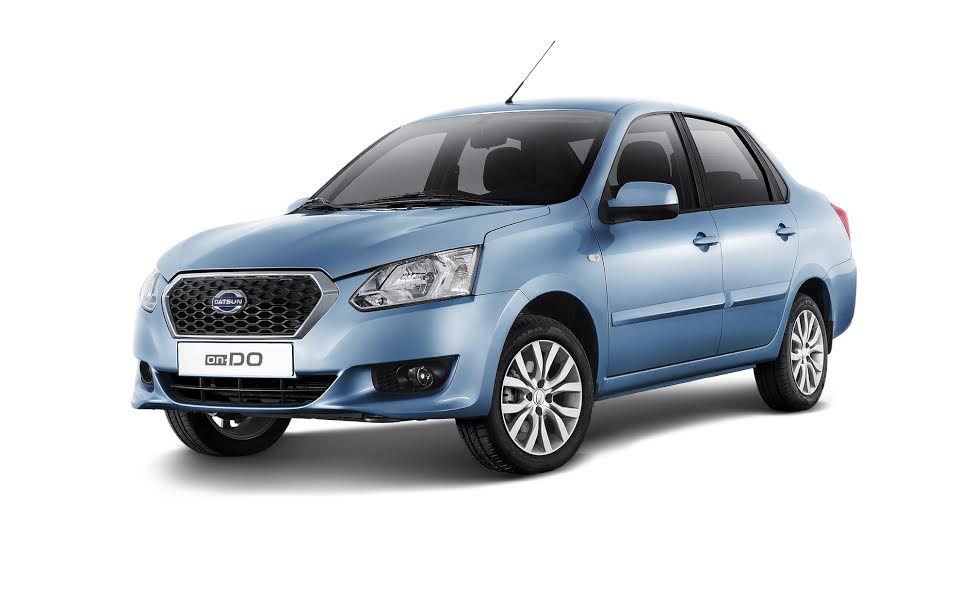 DATSUN on-DO
Exterior design
The front of Datsun on-DO is dominated by the chrome-framed hexahedron Datsun family corporate ‘D-cut’ grille that houses the new Datsun badge in its center.

Datsun on-DO sedan is 4,337 mm long, 1,500mm tall and sits on a long 2,476mm wheelbase to ensure as much interior cabin space as possible. Special attention was paid to the area behind the rear wheels, which translates into a large trunk offering a class-leading 530 liters of luggage space. To cope with the rough roads it is likely to encounter, it has a useful 174mm ground clearance.

Interior design
A unique instrument panel assembly, steering pad and high quality cloth seat coverings give the Datsun on-DO a premium feel. Clear and easy to read dials sit ahead of the driver, with a large rev counter and matching speedometer featuring white numerals on a blue background. Between the two dials is a digital trip meter incorporating a clock, bar fuel gauge and economy meter.

Practicality is one of the key features of Datsun on-DO. As well as a large trunk with a wide opening aperture, every model in the range has folding rear seats to increase luggage space. Depending on the version the rear seats fold on a 60/40 basis. The trunk also features a closing handle inside the lid so that it can be closed without the need to touch the exterior of the car (a boon in winter when the car is covered in road grime).

Datsun on-DO is available with a five-speed manual or four-speed automatic transmission.

Chassis, steering and brakes
With MacPherson strut independent front suspension and a beam rear axle, the basic chassis is a tried and trusted layout known to provide a good balance between handling and ride comfort.

For Datsun on-DO – and mi-DO, too – the brakes, steering and chassis have been carefully tuned to enhance ride comfort at the same time as sharpening the handling and providing a flat ride on all surfaces allied to exceptional shock absorption on pitted and bumpy roads. Ground clearance similar to a crossover helps on-DO cope with Lebanese roads.

Gas-type shock absorbers are used for good body control over undulating surfaces while spring rates have also been changed. Thicker anti-roll bars are fitted at the rear while direct electric power steering has been adopted to improve steering feel.

Engineering
Engineers have placed great emphasis on maximizing the car’s overall refinement, particularly in terms of noise, vibration and harshness. 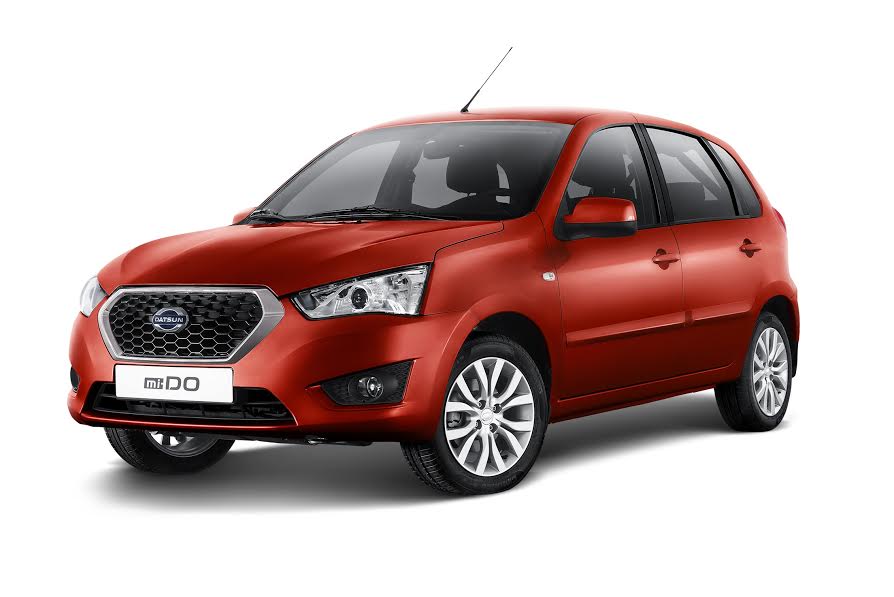 Exterior design
Although clearly related, Datsun’s two models for Lebanon are different in the way they look. The Datsun mi-DO hatchback is shorter than the Datsun on-DO sedan and has a more aggressive, sporty appearance.

This visual strength is most obvious in its ‘face’, which is distinctly different from the sedan’s. Although both share the confident, ‘D-Cut’ grille, significant changes to the headlamps and bumper assembly give Datsun mi-DO a bold and premium feel. At the rear, the tailgate is deep and opens wide to make loading and unloading the trunk as easy as possible, while the bumpers and protective side body moldings are body colored.

Interior design
As with Datsun on-DO, a modern instrument panel assembly, chunky steering wheel and luxurious cloth seat coverings can be found inside the Datsun mi-DO with its quality highlighted by the use of silver colored accents and grained interior covering.

The roomy interior offers more rear legroom than many of the rivals while trunk capacity is a useful 240 liters. This can be extended if required by folding the rear seats while for added versatility these fold on a 60/40 basis. Like Datsun on-DO the closing handle is on the inside of the tailgate so that it can be closed without the need to touch the exterior of the car.

Engine and drivetrain
Datsun mi-DO is powered by the same proven 1.6-litre that powers on-DO. It drives the front wheels via a four-speed automatic produced by JATCO.

Both models are available for purchase from today.