MG Motor has launched its new MG RX5 compact SUV in the Middle East. Revealed at this year’s Saudi International Motor Show (17-21 December), MGRX5 will go on sale across the region from January 2018, marking the latest exciting stage in the rejuvenation of the famous British brand.

MG’s new ‘hero SUV’ is set to appeal to explorers across the Middle East. There will be a choice of two well-equipped trims, based on the two available powertrains, with prices starting at around US$14,200 for the 1.5T model (according to country).

Speaking at its show reveal in Jeddah, Mr. Tom Lee, Managing Director of SAIC Motor Middle East, the parent company of MG Motor, said: “The MG RX5 is the latest model to join MG’s exciting range of cutting-edge vehicles, and embodies the positive, new direction this famous brand is taking. As MG strengthens its on-the-ground presence across the Middle East, we believe that this new compact SUV possesses all the attributes to push the brand to the front of mind of the region’s car buyers.”

The MG RX5 boasts an attractive, futuristic design that is instantly recognisable, notably at the front where the stylish square LED headlamps, imposing wing-shaped grille and innovative foglamps endow it with real on-the-road presence. Sporty five-spoke, two-tone 18” rims combine with a sharp waistline that rises from front to rear, enhancing the dynamic look. At the rear, a chrome plate stretches out to the dual tail lights, visually extending the vehicle width – reminiscent of the style of certain premium German models. 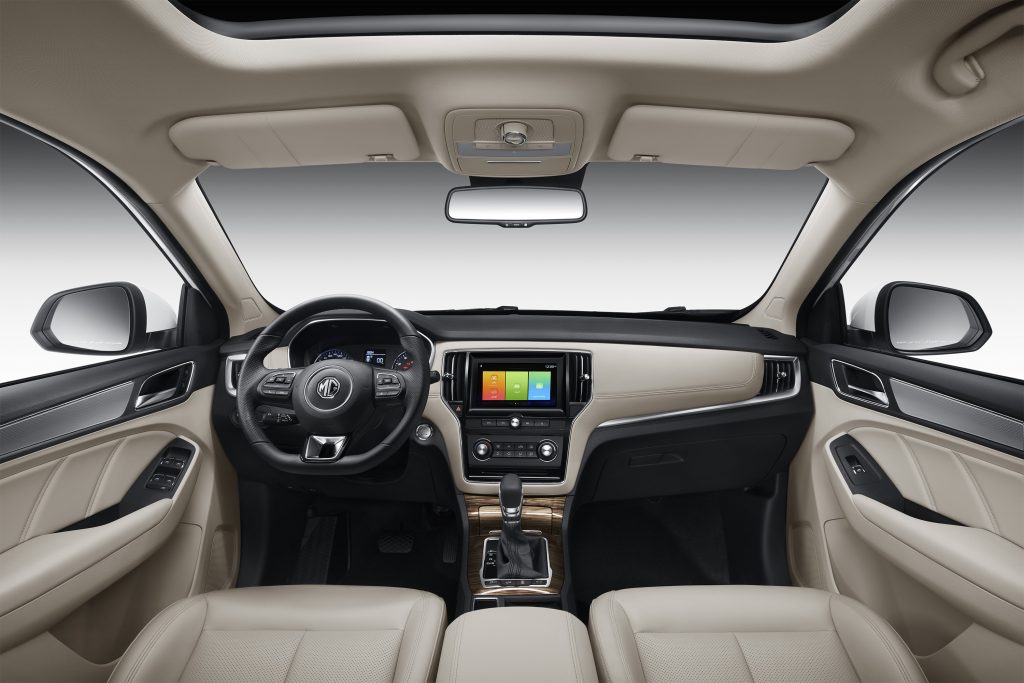 Inside the cabin careful attention has been paid to delivering an extremely high quality finish, with the use of high grade material, chrome edging and soft-touch material covering 80% of the surfaces. A supersize, opening panoramic sunroof floods the interior with light, accentuating the best-in-class space that it offers. Helped by the 2700mm wheelbase, and total length of 4545mm, rear leg space (982mm) and head space (987mm) are significantly better than that offered by rivals.

MG’s new compact SUV shows practicality and convenience. The flexible rear space incorporates adjustable, fold-flat seats with split/fold function, while there are multiple storage spaces throughout the cabin for bottles, mobiles and cups in addition to a large boot area. Useful technology includes remote, one-touch opening of the rear hatch, keyless entry, a start button and an AutoHold function.

A remote smart application allows the driver to operate vehicle functions such as remote start and stop air conditioning, vehicle tracking and aftersales appointments – it even reminds owners of the services needed for the car. And for a hi-tech generation, there is a 10.4” high-definition infotainment touchscreen with Apple CarPlay and Navigation on the 2.0T version and a 8” colour navigation system for 1.5T models.

Power is derived from a choice of two turbocharged engines. Both 2.0T and 1.5T units, which are mated to six and seven-speed transmissions respectively, deliver impressive performance and efficiency. Delivering maximum power of 221 hp and torque of 350 Nm, the 2.0T engine can accelerate the MG RX5 from 0-100kmh in 8.2 seconds, while the efficient 1.5T powerplant returns top figures of 169 hp and 250 Nm.  A smart 4-wheel drive system with new generation electromagnetic torque management guarantees impressive off-road performance.

Great performance isn’t compromised when it comes to safety, with the MG RX5 offering a wide range of passive and active safety measures. The efficient braking system reduces stopping distances by two metres in comparison to key rivals, while standard ESP with traction control, a curving braking control system and MSR (Motor control Slide Retainer) all contribute to a safer journey. Passive safety features include a strengthened body structure that uses thermal formed steel, multiple airbags, automatic unlocking in the event of a collision and a collapsible steering column. All of which has helped the MG RX5 earn a 5-star rating in the C-NCAP crash tests.