GMC harnessed the power and style of its iconic Desert Fox nameplate at this year’s Dubai International Motor Show, showcasing a unique Middle East Concept Truck alongside an original example of this classic special edition. Demonstrating how the premium brand’s reputation for delivering power and style is reflected in its current line-up, GMC also showcased the all-new 2018 Terrain and a refreshed 2018 Yukon Denali on the brand’s stand at the show.

The Desert Fox Middle East Concept Truck that was unveiled at the show was created exclusively for the Middle East region where GMC’s trucks are respected for their ability to work hard, and desired for the premium quality they deliver. Based on the 2018 Sierra 1500, this Concept Truck echoes the look and feel of the original, while bringing it up to date.

Combining the purposeful exterior styling of the 2018 Sierra 1500, with its large front grill and headlamps that feature GMC’s signature LED lighting, with a similar desert color and motif application to that of the original model, the Desert Fox Concept Truck simply demands attention. It is designed with a range of features, courtesy of GM-certified accessories such as a sports bar, performance exhaust system and LED roof lights, complemented with exclusively developed prototype parts, including off-road front and rear bumpers, Baja style fenders, desert terrain tires, beadlock wheels, front recovery winch and Desert Fox theme stripes.

With the original Desert Fox Jimmy & Sierra first released in 1977, GMC celebrated the fortieth anniversary of the launch by exhibiting a lovingly renovated model from the region at the Dubai International Motor Show. The classic 1979 model on display was designed to tackle some of the toughest terrain in the world. This special edition was brought from Saudi Arabia where the truck has spent its entire working life. 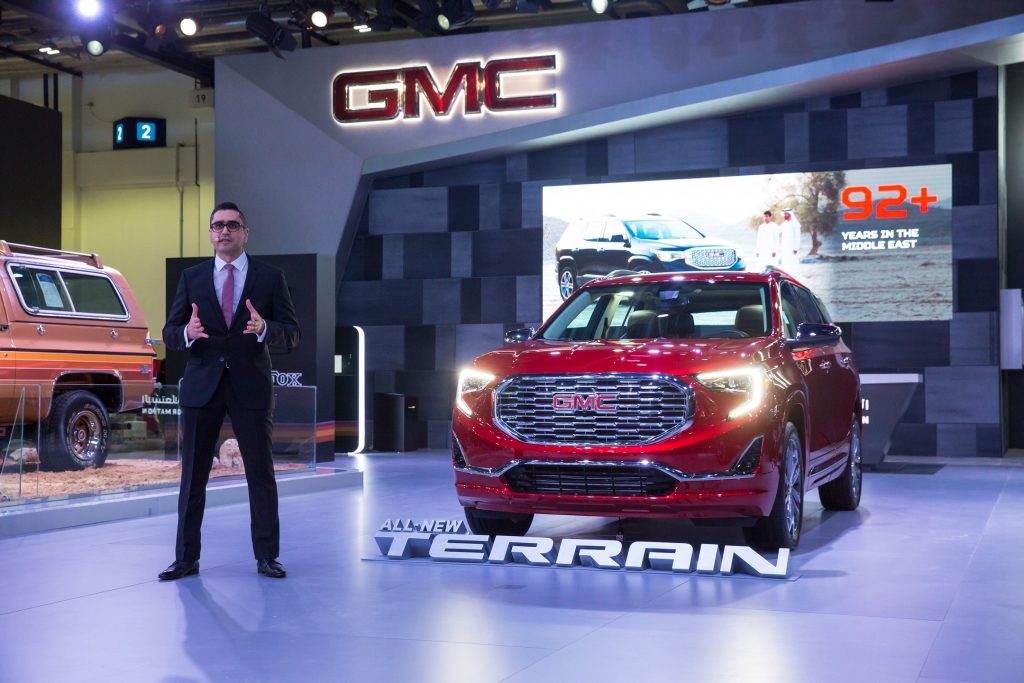 Sajed Sbeih, Head of Brand for GMC Middle East, said: “While GMC has a very bright future ahead, it is important that we don’t forget where we’ve come from. Having been part of the automotive fabric of the region for over 90 years, we wanted to share this legacy here at the show in the shape of the original Desert Fox Jimmy. At the same time, we wanted to honor our past by updating the Desert Fox for the 21st century, thus creating this Concept Truck exclusively for the Middle East.”

GMC also showcased a number of exciting new production models. First launched in 2009, the Terrain has played a major role in GMC’s recent success and has become an entry point to the brand. Now, in the form of the all-new 2018 Terrain, it offers the best of GMC’s bold design and engineering excellence in a well-equipped, smartly-packaged, compact SUV that is all-new from the ground up.

The all-new 2018 Terrain is available in three trims: the entry level SLE trim, with the SLT and Denali trims taking the higher end of the market. Offering two engine variants – the 1.5L turbo and 2.0L turbo – the new model includes the latest, most advanced, connected infotainment system offered by GMC with smartphone-like functionality and predictive, real-time navigation, as well as features like Apple CarPlay compatibility.

Another key factor in GMC’s success has been its Denali brand, the premium package for all GMC vehicles, and the Dubai International Motor Show showcased the refreshed 2018 Yukon Denali. Already extremely popular in the region, some 60% of total sales of Yukon in the UAE are currently Denali models.

Completing the GMC line-up at the show was the premium 2018 Acadia Denali. Also available as an All-Terrain model with enhanced off-road capabilities, the GMC Acadia crossover is aimed at the heart of the midsize SUV segment and designed to offer great versatility and refinement with more advanced safety technology and a more efficient powertrain, along with a legacy of functionality and spaciousness.

Speaking at the show, Richard Latek, US Marketing Director, GMC, commented: “New models like the all-new 2018 Terrain and 2018 Yukon Denali emphasize GMC’s rise as a premium brand and its position as a leader in its segment. Highly equipped, extremely versatile, finished to premium standards and featuring distinctive exterior designs that simply reflect a professional grade, GMC models continue to offer the complete package for customers in the Middle East.”

GMC can proudly point to a long and rich heritage in the Middle East, the only region outside North America where it is marketed. The brand, affectionately known across the region as ‘Jims’, entered the market in the 1920s with 4×4 and 6×6 vehicles that were specifically developed for desert use. Its range of pick-up trucks, SUVs and crossover vehicles are renowned for their capability, innovation and engineering excellence.