Even more 911 in an SUV: the new Porsche Cayenne Turbo

With its world premiere at the 67th International Motor Show in Frankfurt, the new Porsche Cayenne Turbo is the new flagship of the model line-up. The completely new top-of-the-range model from the third generation of the Cayenne is once again raising the bar for sporty performance in its segment. The four-litre V8 biturbo engine delivers 550 hp (404 kW). The improved driving dynamics are based on a combination of innovative technologies, such as active aerodynamics including an adaptive roof spoiler, self-levelling three-chamber air suspension, wider rear tyres as well as the new high-performance brakes. With additional options, such as rear-axle steering or electric roll stabilisation with a 48-volt system, the SUV is able to achieve the driving characteristics of a true sports car. The new Cayenne Turbo accelerates from zero to 100 km/h in 4.1 seconds (3.9 seconds with the Sport Chrono Package) and reaches a top speed of 286 km/h.

Even sharper design
With a unique front end and the LED headlights from the Porsche Dynamic Light System (PDLS), the Cayenne Turbo has an appearance that is both dominant and independent. At night, the new Turbo sets itself apart from other Cayenne models with its double-row front-light modules. The side profile is characterised by 21-inch Turbo wheels as standard, specially reserved for this top model, set in flaired wheel arches with painted wheel-arch trims. The twin tailpipes, unique to the Turbo, is the key distinguishing feature on the rear end. The door trims and rear apron are painted in the exterior colour. The completely new interior reflects the enhancement of sportiness and comfort at the same time. Virtually all of the vehicle functions in this fully networked SUV can be viewed and operated, using the high-resolution display and touchscreen of the Porsche Advanced Cockpit. Among them, for example, is the BOSE® Surround Sound System with 710 watts fitted as standard. Drivers and passengers get to experience this top-of-the-range model in sports seats with an 18-way adjustment. The integrated headrests are a new feature and are reminiscent of the 911.

Greater power, greater torque: biturbo eight-cylinder with 550 hp
At the heart of the Cayenne Turbo is the new four-litre V8 engine with twin turbocharging. Producing 550 hp (404 kW), it exceeds the engine of its predecessor by 30 hp (22 kW); while the maximum torque of 770 Nm represents an increase of 20 Nm. The new eight-speed Tiptronic S automatic transmission converts both power and torque into acceleration and speed by means of the active all-wheel drive Porsche Traction Management (PTM). The new Turbo sprints to 100 km/h in 4.1 seconds (3.9 seconds with the optional Sport Chrono Package) and reaches a top speed of 286 km/h. As is characteristic for the new generation of engines, the exhaust turbochargers are arranged inside the cylinder V, in the “central turbo layout”. The shortened exhaust branches between the combustion chambers and the turbochargers mean that the engine is especially responsive, while the central turbo layout results in significantly improved power delivery. Another advantage is the compact construction of the engine allowing for a lowered engine mounting position, which has a positive effect on driving dynamics: a lowered centre of gravity and improved cornering precision.

Active chassis with three-chamber air suspension and mixed tyres
The new lightweight chassis of the Cayenne Turbo combines the best of three worlds: the precision of a sports car, the comfort of a saloon and the adaptability of an off-road vehicle. This diversity is complemented by the new three-chamber air suspension with the active shock-absorber system (PASM), allowing the Turbo to perform exceptionally in every driving condition. The concept of the differing tyre sizes, with standard dimensions of 285/40 at the front and 315/35 at the rear, comes from sports car construction and produces even better longitudinal and lateral power delivery. 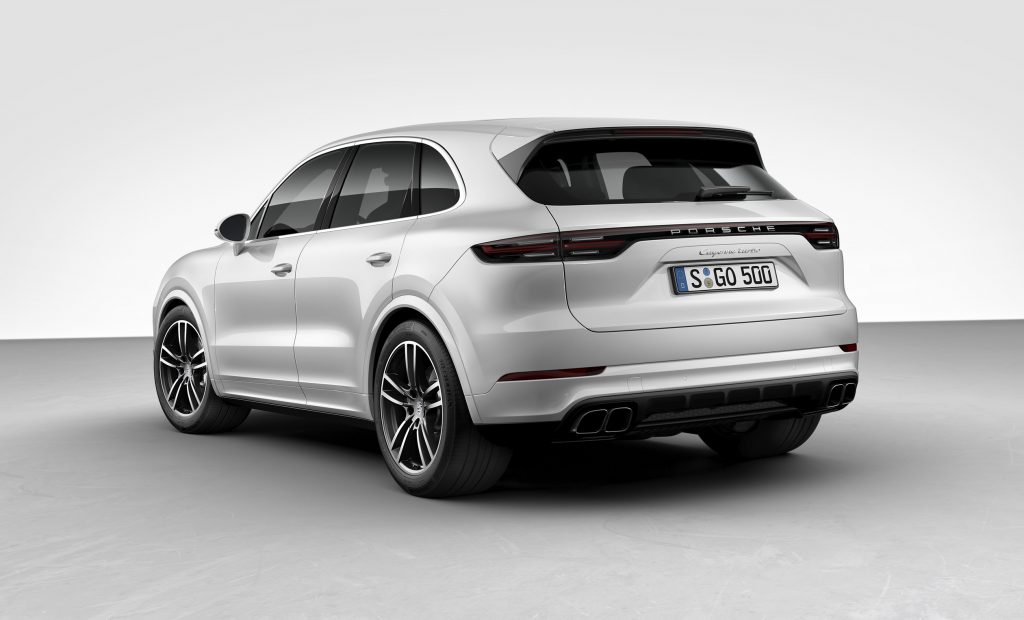 First SUV with adaptive roof spoiler and new high-performance brakes
The new Cayenne Turbo is the first SUV to have an adaptive roof spoiler as a component of its active aerodynamics. Depending on the position of the spoiler, this optimises efficiency, increases downforce on the rear axle and, in the airbrake position, shortens the braking distance needed from higher speeds. As a result, at full braking from 250 km/h, the SUV comes to a stop up to two metres earlier. The aerodynamic system therefore complements the new Porsche Surface Coated Brakes (PSCB), which are standard. The tungsten carbide layer applied to the steel discs increases braking performance and resistance to wear while reducing the amount of brake dust at the same time, meaning less dirt on the rims. The top system remains the optionally fitted Porsche Ceramic Composite Brakes (PCCB).

First deliveries of the new Cayenne Turbo will arrive in June 2018. Pricing and market specifications are soon to be announced in India.