At the opening of the region’s biggest automotive event, the Dubai International Motor Show (DIMS), Porsche revealed four new models for the first time in the Middle East. The brand’s sports car showcase featured the latest generation Cayenne, as well as the all-new Panamera Sport Turismo, Panamera Turbo S E-Hybrid and the limited edition 911 Turbo S Exclusive Series. Alongside the model debuts, Porsche Works Driver and newly crowned FIA WEC Driver’s Champion in the LMP1 category, Earl Bamber was in attendance to highlight how the brand’s motorsport achievements are helping create the sports car of the future.

Deesch Papke, Chief Executive Officer at Porsche Middle East and Africa FZE, commented: “Our aim at this year’s event is to once again reiterate how and why Porsche builds the best sports cars in every segment. Although all four models revealed today differ in size and shape, they all share the same impressive Porsche performance and iconic design DNA that have become synonymous with our brand. The eagerly anticipated new generation of the Cayenne for example takes an already successful four-door sports car to even greater heights. I am certain our customers and enthusiasts will be impressed by how our engineers have created a dynamic SUV, with offroad capabilities and outstanding levels of comfort, coupled with innovative assistance systems.”

With more than 770,000 units of previous generations sold worldwide, the arrival of the third generation Cayenne has been highly anticipated.

Combining typical Porsche performance, design and versatility, the latest Cayenne range features up to 65 kilograms of weight savings, along with innovative chassis systems, wider rear tyres and rear-axle steering. Going off-road is now even easier, as the driver can choose between five pre-programmed drive and chassis modes, depending on the terrain. A completely new interior showcases the Porsche Advanced Cockpit concept, which creates an even closer link between driver and vehicle. Virtually all the vehicle functions in this fully networked SUV can be viewed and operated using the high-resolution display and touchscreen.

At launch, the Cayenne model range will be available in three versions that range from 340 hp to 550 hp and feature a new eight-speed Tiptronic S gearbox. Top of the model line and on the stand at this year’s DIMS, the new Cayenne Turbo delivers a maximum torque output of 770 Nm (an increase of 20 Nm) and accelerates from zero to 100 km/h in just 3.9 seconds, when equipped with the optional Sport Chrono Package. 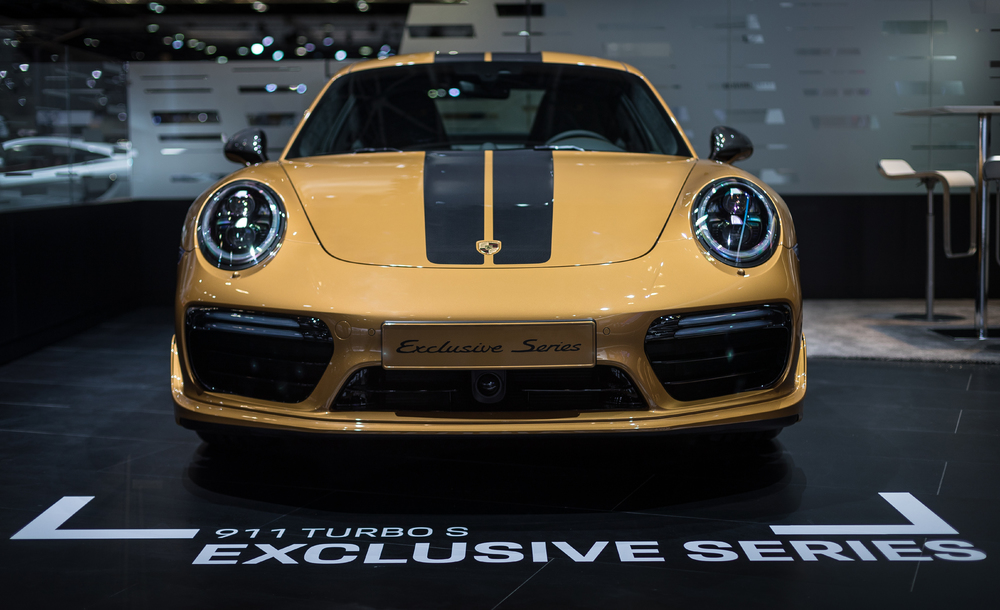 Also on public display for the first time in the Middle East region are the Panamera Turbo S E-Hybrid, the Panamera 4S Sport Turismo as well as the 911 Turbo S Exclusive Series, highlighting the diversity of Porsche’s sports car line-up.

The Panamera Sport Turismo is the first saloon featuring three seats in the back and a completely redesigned rear exterior. A versatile and practical sports car in the luxury segment, it can accommodate five passengers and up to 520 litres of luggage. The Panamera 4S Sport Turismo, revealed at this year’s motor show, offers typical Porsche performance with an output of 440 hp and a 0-100 km/h acceleration time of 4.2 seconds, when equipped with the Sport Chrono Package.

Now the most powerful saloon in the range, the Panamera Turbo S E-Hybrid brings cutting-edge technological advancements in electric mobility to the fore. A boost strategy adapted from the 918 Spyder delivers 850 Nm of torque and a 0-100km/h acceleration time of 3.4 seconds in a model that can drive up to 50 kilometres in electric mode.

Ahead of competing in the final round of the FIA World Endurance Championship (WEC) set to take place in Bahrain this weekend (16th – 18th November), two-time Le Mans winner Earl Bamber attended the 2017 instalment of DIMS. Discussing how Porsche utilises motorsport to develop road cars and referring to the 919 Hybrid show car on the brand’s stand, he said: “The 919 Hybrid is a phenomenal race car, not only because of its performances on track, but also because it has served as a laboratory on wheels for Porsche to develop new technologies. For example, the regenerative charging system, featured in the new Panamera Turbo S E-Hybrid, was an outcome of technology tested during racing conditions in the WEC. This approach means that ultimately the customer always benefits, and I for one am proud to be part of that process.”

During the first day of the motor show, Porsche also premiered the 911 Turbo S Exclusive Series, a limited edition coupé, that represents the most powerful and distinctive Turbo S to date. Intricately finished by hand at Porsche Exclusive Manufaktur in Zuffenhausen/Germany, the 3.8-litre, six-cylinder biturbo flat engine (with an exclusive power kit) has a maximum torque of 750 Nm and a power output of 607 hp.

A wide variety of models, including the Macan, 718 Cayman and race track ready 911 GT3, as well as the show car version of the three-time Le Mans winning 919 Hybrid, are on display at the Dubai International Motor Show until 18th November.