How to use Launch Control in a BMW 530d M Sport?

Does it make sense? An executive sedan which costs almost a whopping Rs. 80 lakhs (on-road) price comes with a launch control function. Why do people settle for a 5 Series or an E Class or an A6. Or if exclusivity mattered most, a Jaguar XF? There are a handful of luxury car buyers who want an executive sedan to be parked out-front the house’s driveway. And here we are talking about 6-cylinder mills. Indians crave for a diesel motor under the hood; a diesel motor that the neighbour’s tuned petrol car couldn’t possibly hold a candle to! A majority of the masses want a car that can be used for their daily office run for all the lucrative fathers out there, as well as their born-with-a-silver-spoon sons who want to make a style statement at the pub every weekend. We’ve had the BMW 530d M Sport as our long termer in Kerala for quite a bit now, and t hasn’t ceased to amaze us. Read on to find out why.

If you’re going flat-out in a BMW 530d, then ‘Launch Control’ is something you have to experience! The car comes with a 6-cylinder diesel engine which churns out 258bhp and 540 Nm of torque, which helps it achieve the 0-100kmph sprint in just 6.1 seconds. And people call it a family car! We think it’s a lot more than that. 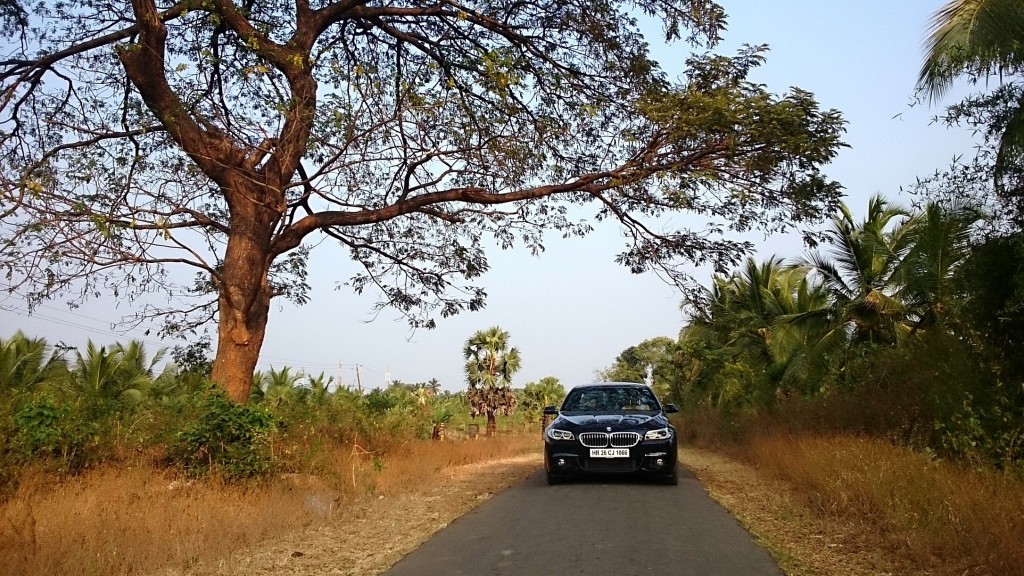 We drove the 5 Series through the pocket roads of Kerala

What is Launch Control?

Launch control is an electronic assist which helps the driver attain maximum acceleration during stand-still position. Usually, this plays an integral role in race cars, in order to propel them to lightning speeds. Launch control operates by using an electronic accelerator and a computer program. The software controls acceleration based on engine specifications to make the car accelerate smoothly and as fast as possible, avoiding spinning of the drive wheels, engine failure, due to over-revving, and clutch and gearbox problems. In racing cars, this feature is only available at the start of the race, when the car is stationary in the grid. After the car is running at a certain speed, the software is disabled.

Here in the 530d, the drive goes to the rear wheels. So before we try it out, we had a quick look at the owner’s manual to understand the actual procedure. On the 81st page of the owner’s manual, we found steps like – “Put into Sport Plus Mode,  Move the gear lever to the left (M/S), Press the DSC button, Press the brake pedal and accelerate at the same time.”

These were the steps guiding us in the owner’s manual.  A non-car person would wonder how to dab on the brake and accelerator at the same time. This is where we should use the race technique called ‘Left Foot Braking’. Left foot braking is a technique which is followed by racecar drivers during their race in order to save time. Left-foot braking is primarily used in front-wheel-drive cars and comes in handy during cornering at high speeds. Left-foot braking was invented by rally drivers, and I often wonder how they mastered the art. 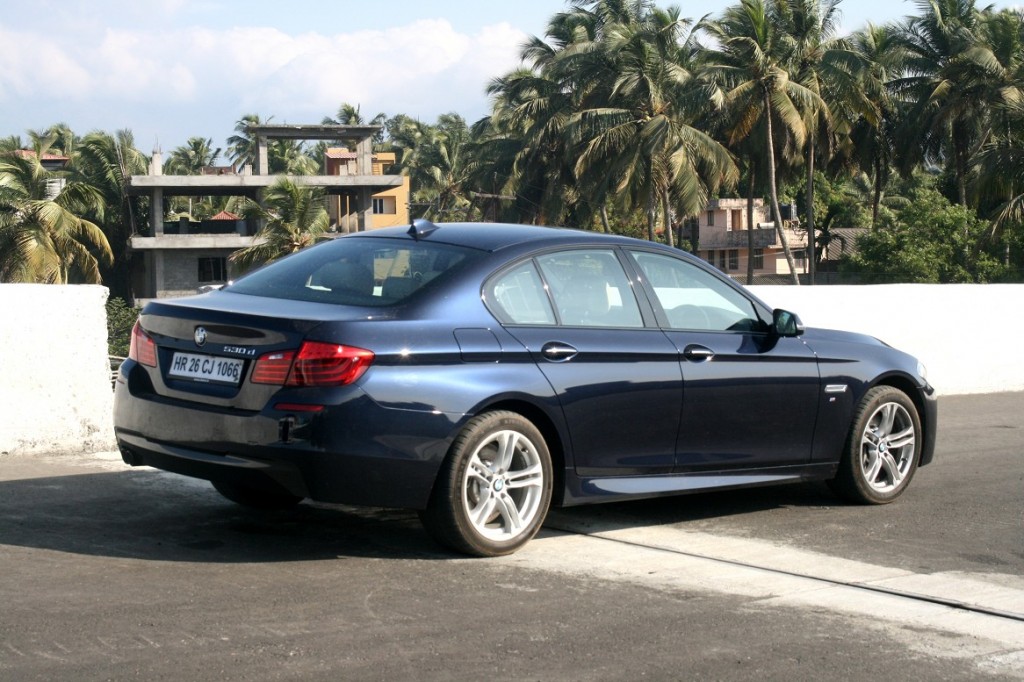 To try out launch control, we had to get used to the left-foot braking technique first. It is as daring as riding a motorcycle on a single wheel without a helmet. Because your left foot is mostly used to control a clutch, if you’re from a middle-class family like me and cannot afford paddle-shifters, that is. Or if you drive a car with an automatic gearbox, then your left foot gets all the rest. But here the story is different; while it is an automatic gearbox, you need to use your left foot to press the brake pedal and release it like you release the clutch, while your right foot is pushing the accelerator. Tricky, isn’t it?

I found an empty ground in the beginning to make myself comfortable with the left-foot braking technique. I tried quite a bit and realised I was almost ready to hit the road doing the same thing. If you end up doing it wrong, then you will wreck the car. Hence I had to find an empty stretch of tarmac.

To my luck, we found an empty, yet-to-be inaugurated bridge. It was broad and closed. We decided to shoot it on that bridge. My crew was all set, and off we went. My first attempt, as per the owner’s manual resulted in a goof. But then I realised that if our foot goes wrong, the car automatically shifts to comfort mode. And it happened. The trials that followed were not a failure. But what I wanted did not happen. Supposedly, a launch control symbol shows up on the display and the tyres start smokin’. If this happens, you know you’re right. 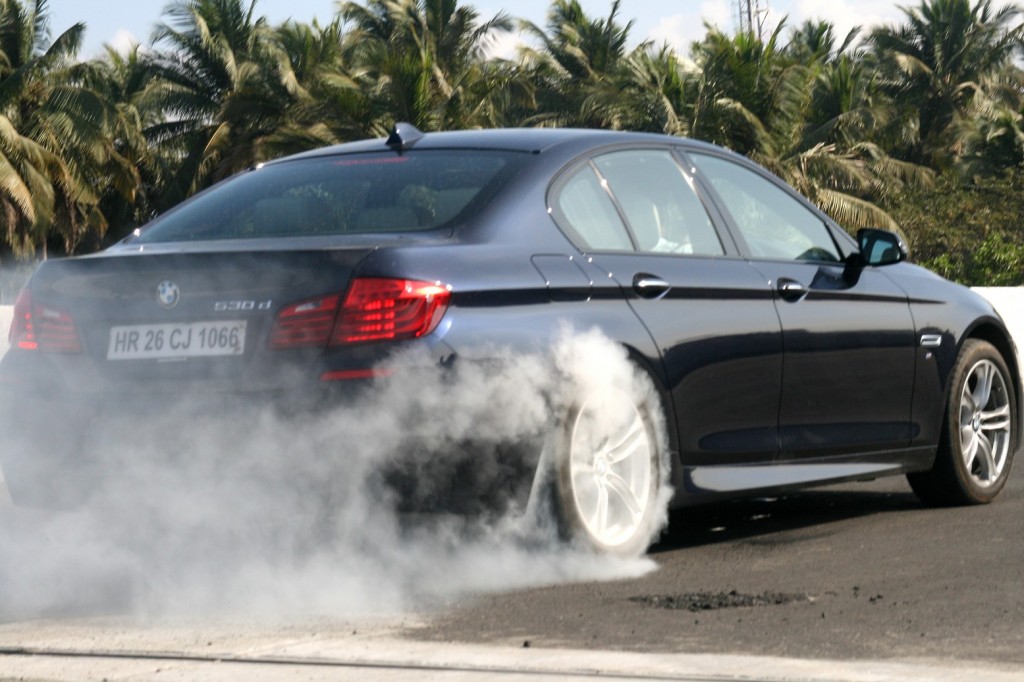 I pressed on the brake pedal firmly with my left foot, and pedalled the accelerator gently, and I felt the rpm gradually multiplying. It went up to 4000 rpm and nothing seemed visible behind. All I could see was white smoke! I noticed the launch control symbol on the screen ahead and released the brake. The rear tyres spun at high speeds, producing white smoke and the car propelled forward like an M-spec BMW! The car can reach 250kmph effortlessly with launch control, but the bridge was not long enough to try out mental speeds, so I’d decided to slow down.

It’s just how this car seems to convince you about what real driving pleasure is when you least expect it to, given how family car-like it is. 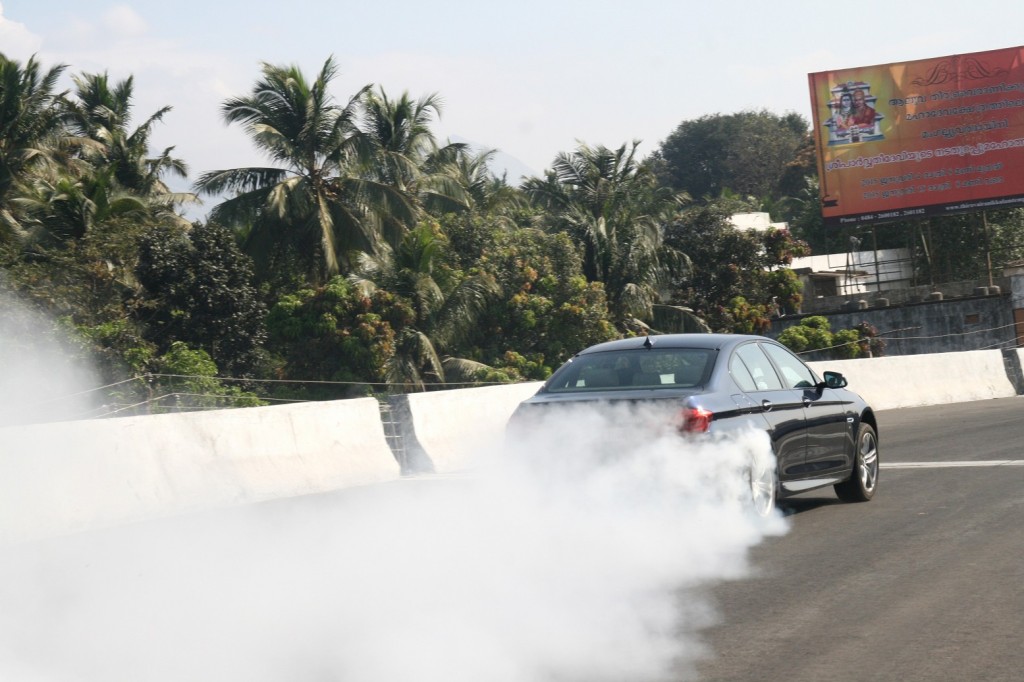 Our step-by-step demonstration video of the launch control will be uploaded here shortly. Watch this space for more.