Ducati has unveiled its larger version of the Scrambler, the 1100 – retaining the same design with hints of a bit of an evolution.

Visually, it features an all-new twin-upper-spar steel-trellis frame which helps it pack in a bigger engine, and there twin under-seat exhaust setup that helps you differentiate it from the regular Scrambler.

It employs a 1079cc, L-twin engine that makes 86hp and 88Nm of torque. Linked to the engine is a 6-speed gearbox and features ride-by-wire too. A host of electronics and features include ABS, four-level traction control system, cornering ABS and three riding modes: Active, Journey and City. ‘Active’ is the full-throttle mode, ‘Journey’ suits the highway while ‘City’ cuts power down marginally and engages traction control as well. The 1100 is heavier than the base Scrambler, but is lighter than the Desert Sled. It also features a 14.7-litre fuel tank – slightly higher on capacity compared to the 800cc model.

Available in three variants: Standard, Sport and Special – all of which produce the same power, but differ in terms of identity. Standard and Special 1100 variants boast of a fully adjustable 45mm USD fork Kayaba and a pre-load/rebound-damping adjustable monoshock, while the Sport gets the same thing, but by Ohlins. Twin-discs with four-piston Brembo calipers are standard on all variants. Also, new wired-spoke wheels are shod with Pirelli Enduro tyres. 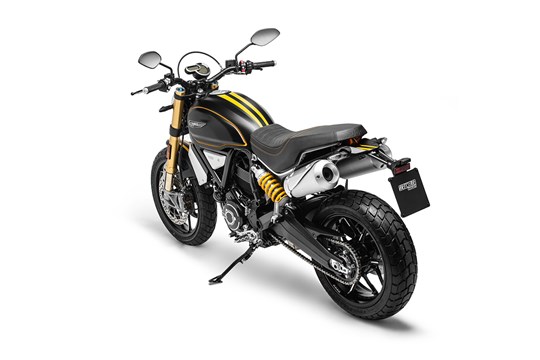 A new headlamp, an LED ring around the circular DRL, an oval-shaped design element along with the circular single pod on the instrument cluster that displays the fuel level, tachometer, dual trip-meters, a ‘distance to empty’ light, riding mode, air temperature, traction control level – are among some of the cosmetic updates. The inset unit also displays information from the Ducati Multimedia System, available with Bluetooth.

Expect an India launch sometime soon, but also look forward to paying a premium over the regular Scrambler.