The next rounds of the 2018 French Rally Championship will see Michelin Motorsport present the sport’s first connected tyres. They will be capable of communicating with drivers and codrivers; thanks to a downloadable smartphone application (iOS and Android) that has been conceived to help competitors improve their performance by optimising the tyre factor.

The wraps will come off this new system just one year after the launch of Michelin Motorsport’s My Rally Engineer application. “Our initial My Rally Engineer app, which was introduced in 2017, is a digital tool designed to allow amateur crews to track and optimise the performance of their tyres,” says Serge Grisin who is in charge of Michelin Motorsport’s Innovations Programme. “Today, we have gone a significant step further since Michelin Motorsport Connect enables competitors to collect data in real time and benefit from two-way dialogue with their tyres by means of a practical and intuitive new application.”

This new solution is the fruit of Michelin Motorsport’s understanding of the needs of those rally drivers and co-drivers who do not benefit from the presence of a Michelin technical advisor on events. 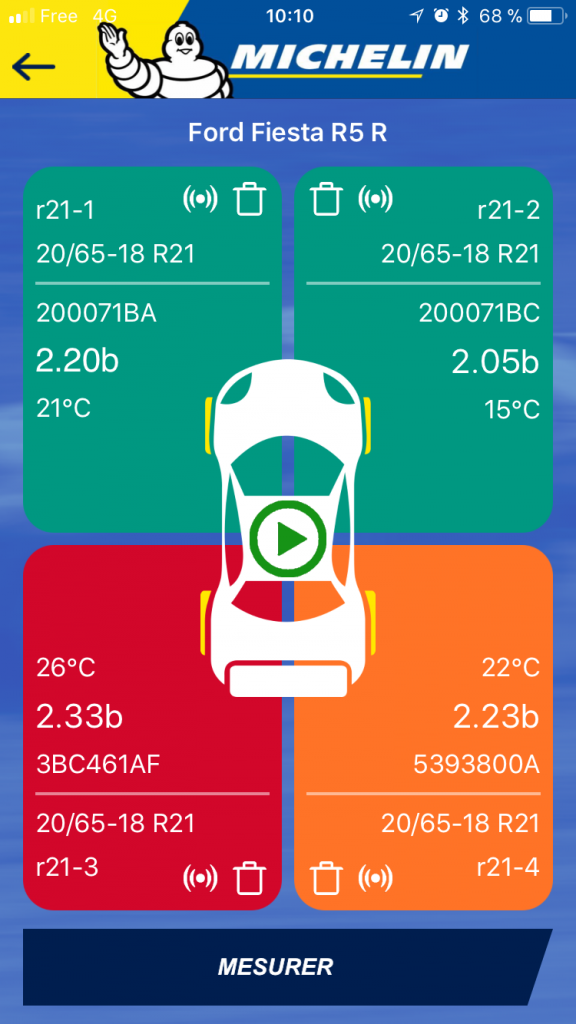 “Connected technology is a realty in today’s tyre industry and we are exploring ways of making these innovations a real asset for our customers,” adds Serge Grisin. “Rally crews clearly need information that can help them optimise tyre performance.”

Making correct tyre choices, carefully adjusting tyre pressures and adopting an efficient driving style not only allows performance to be maximised but it also contributes to making motorsport safer. At the same time, the regulations concerning tyres in rallying are becoming increasingly draconian, so it is vital to exploit their full potential.

Checking tyre pressures before and after special stages is key to understanding how rally tyres function. It is not always an easy task to carry out, though, especially when it entails parking up on a narrow road. Also, with the clock ticking down to a stage start, it can generate additional stress. With Michelin Motorsport Connect, drivers and co-drivers can permanently monitor tyre pressures, while at the same time benefiting from tyre-related information and being able to log data during rallies. Analysing this data makes it easier to identify the adjustments that need to be made ahead of subsequent competitive sections.

“Thanks to Michelin Motorsport Connect, all rally competitors have access to in-car data,” concludes Serge Grisin.

Michelin Motorsport Connect combines re-usable sensors located in specific housings glued inside Michelin rally tyres, an in-car receiver and a smartphone application (iOS or Android). Available from approved Michelin Motorsport distributors at process starting from €400, it will initially be released in France in the coming months before being introduced elsewhere in Europe and the rest of the world.