The McLaren 650S GT3 scored its second victory of the Blancpain Endurance Series season at the weekend with victory for McLaren GT customer team Von Ryan Racing. Works drivers Rob Bell, Shane van Gisbergen and Kevin Estre battled through the grid after a challenging qualifying session, but a bold strategy call by the team saw the McLaren add to the victory in Silverstone, with a winning margin of 14 seconds. This result makes the 650S GT3 the only model to secure two victories this season in one of the most world’s competitive GT series.

Mixed fortunes for Von Ryan Racing saw the #59 650S GT3 of factory driver pairing Alvaro Parente and Bruno Senna alongside Adrian Quaife-Hobbs qualify on the second row, while Bell, Estre and van Gisbergen lined up P24 in the #58 car after a red flag brought an early end to a session denying Estre a chance to improve his time as the track conditions improved. 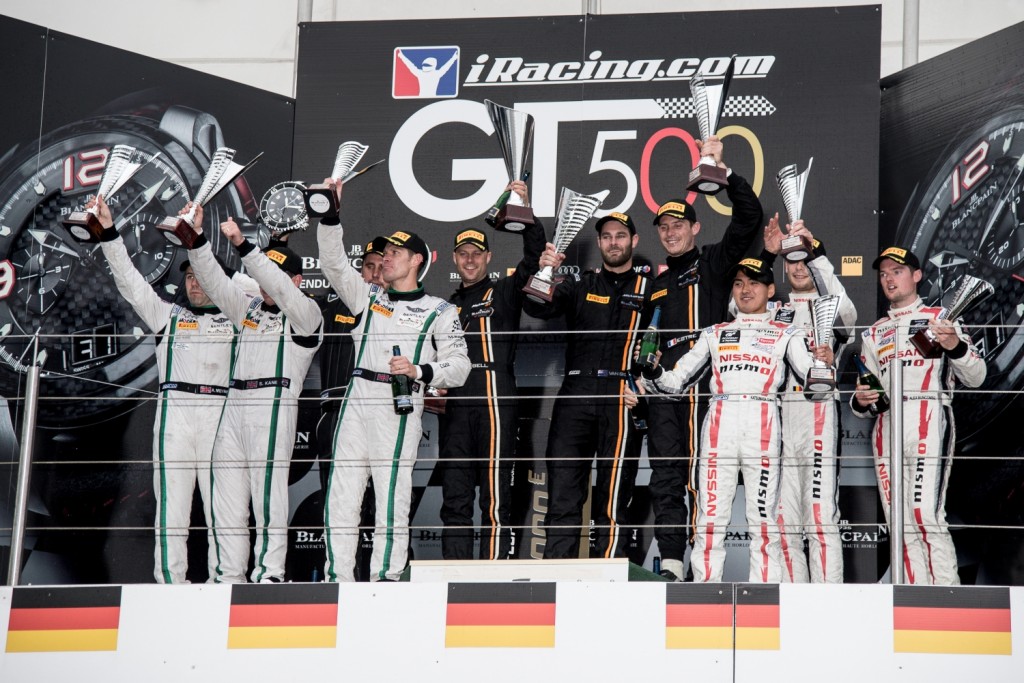 Parente and Bell took the opening stints, and both made strong starts with Bell looking to move through the midfield and Parente pushing the leaders hard. This charge was brought to a premature end midway through this stint as Parente was pushed off the track, leaving the Portuguese driver in the gravel and the Safety Car was deployed. With Bell pushing hard up to that point, the team made a bold call to pit the #58 McLaren, which would push the time limits for each driver to the maximum and Bell made way for van Gisbergen. The previously stranded #59 car returned to the pits, and Senna looked to recover the time lost as the race got underway again.

As he had done for the previous victory earlier in the season at Silverstone, van Gisbergen worked hard to close the gap ahead while managing fuel. This careful and considered stint allowed the New Zealander to complete the extended stint brought about after the early stop, pushing his time in the car to the limit as he lay in P18. A prolonged second Safety Car period as the stint neared its end worked in the team’s favour, and van Gisbergen’s pitstop was timed to perfection to set up an exciting final stint with Estre taking over with 70 minutes of the race remaining.

The running order was shaken up as more than 90 percent of the grid pitted under the Safety Car, and when Estre emerged back on to the track he had gained six positions. A top 10 finish looked to within grasp, as all cars ahead of the Frenchman were still to make a final driver change. Consistently quick laptimes followed by Estre as he closed the gap on fresh tyres, and as each of the cars ahead pitted, the #58 steadily made its way further through the field. Calculations on the Von Ryan Racing pitwall estimated that a podium was likely, and as the pit window closed Estre had taken the lead. As the clock ticked down, and the laps went by, the team watched as Estre managed and extended the lead, pulling out a 14 second gap as he crossed the line. The result saw Bell, van Gisbergen and Estre on the top step of the podium for the second time this season, and marked the McLaren 650S GT3 – still only in its debut season – as the only car to score multiple victories in the Blancpain Endurance Series this year.

“An amazing strategy call by the team and a bulletproof car won us that race. It’s fair to say qualifying didn’t go to plan, but we knew we were in a good position with the set up of the car so we had a strong chance, but the decision to pit early was what made the difference. When the call came over the radio from my engineer that we were going to “roll the dice” with the strategy, I was a little bit surprised, but it was absolutely the right move. A fantastic way to end the year with Von Ryan Racing, and score another victory for the 650S GT3 in its debut season.”

“We pushed everything to the absolute limit this weekend, and got everything out of the car that we could. Qualifying that far down the grid meant we had it all to do, but the team did a fantastic job to give us a car capable of consistently quick laptimes, and the strategy was absolutely perfect. The 650S GT3 has proved itself to be one of the best on the grid this year, and it is great to end the season stood on the top step of the podium.”

“A fantastic way to end such a great debut season with the 650S GT3 and Von Ryan Racing. Rob [Bell] and Shane [van Gisbergen] drove faultless stints, and the calls by the team throughout were brilliantly calculated. That final stint was really exciting, and the car felt great as we reeled in the leaders. The strategy won us the race, and a lead of 14 seconds as I crossed the line shows what a great job the team did.”

“Congratulations to all at Von Ryan Racing and the support staff from McLaren GT. A thoroughly deserved victory after an incredibly bold strategy, which they pulled off to perfection. The Blancpain Endurance Series is one of the most challenging GT championships in the world, and to win at this level is a huge achievement, so for the 650S GT3 to be the only car to have scored a double victory shows the strength of the car, and is a real credit to Von Ryan Racing and the drivers who have continued to move the performance forward all season.”