Jehan Daruvala was the winner of “One in a billion hunt” that was contested by Sahara Force India as the Formula One tried to nurture Indian talents through a nationwide contest. Part of the outfit’s academy now, the Carlin driver has become the first Indian driver to take victory at the FIA F3 European championship. 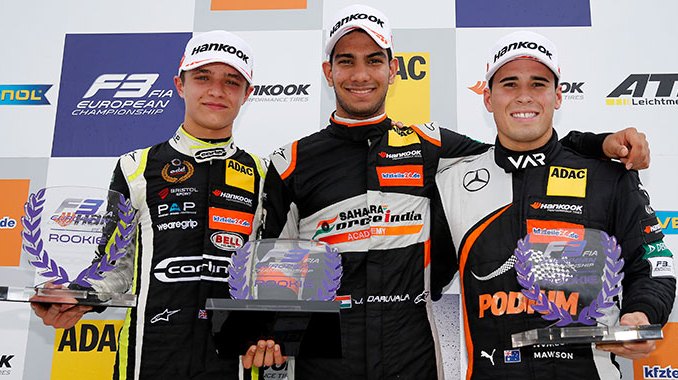 He took the chequered flag at the third race of the fifth round in Norisring, Germany. It happened 18 years after India’s first F1 driver Narain Karthikeyan took his maiden F3 win and he certainly acknowledged the young man’s triumph. After qualifying second, Jehan had a good start and managed to get wheel-to-wheel with the pole-sitter and championship leader Maximilian Gunther.

He took the lead and never gave it up despite full course yellows twice and made history.  Whilst having immense pressure, Jehan kept his cool and extended his points tally. Courtesy of finishing sixth and fourth in the first two races, he sits fifth in the points table and will be hoping to climb up the leader board when the circus moves to Spa-Francorchamps at the end of this month.