Harley-Davidson recently announcedthe winner of 2016 Battle of the Kings competitionwiththe Harley-Davidson Athens dealership winning the ‘Custom King’ title with their bike ‘Nyx’, the Ancient Goddess of the Night inspired build. The bike competedas one of 12 finalists across Europe, Middle East and Africa (EMEA) and was chosen by a panel of custom experts. This year’s edition marked the Middle East and North Africa’s first participation in the international competition represented by Harley-Davidson Casablanca and Kuwait, which competed regionally.

The competition witnessed 211 dealers from across Europe, Middle East & Africa(EMEA) striving for the title of top custom bike builder for the 2016 winner-takes-all contest based on customizing the all-new Sportster® Iron 883™.

The winning bike was developed by Paschalis Tsalamagkas and YannisKourougiaouris, who developed a café racer that took inspiration from the Ancient Greek Goddess of the Night – a shadowy figure of power and beauty. Viewed from the rear, the bike resembles a snake and from the front, a panther, both creatures of the night. The deep gloss black paint with hints of silver flake allude to a starry night sky.

The Harley-Davidson Casablanca dealership was among the 12 champions that made it to the final stage of the competition. Thierry Brouilletand Laurent Zagury,developed a café racer concept inspired by the design of the 1920’s motorcycles, while using current technology. The pilot’s race mode posture has been obtained through the handlebar and rear sets while thecopper effects are a further reference to the brand’s colors and aim to bring a retro feel and authenticity.

The contest was a two-stage process, with the firststage being anonline voting competition across each market including the Middle East. With over 65,000 votes castto establish the winningnational ‘Custom King’ in each market, this culminatedin a head-to-head contest between the national champions and the presentation of the prestigious award at the ‘Wheels & Waves’ custom lifestyle event in Biarritz, France on June 9th 2016.

Designed to inspire individual expression through easy customization, the Iron 883 is one of the most popular Harley-Davidson Sportster models. The new Iron 883 is powered by an 883cc Evolution V-Twin engine tuned to power away from stop lights. Drawing inspiration from garage-built bobbers past and present, the Iron 883 is intentionally rough and rugged around the edges and compromises on none of the Harley-Davidson brand attributes of individuality, rebellion and freedom. Dark Custom is the underground, contemporary face of Harley-Davidson; stripped-down and styled with an authentic retro-inspired slant. Dark Custom bikes feature matte or blacked-out finishes, vintage cues and accessible pricing to attract new entrants to the brand. 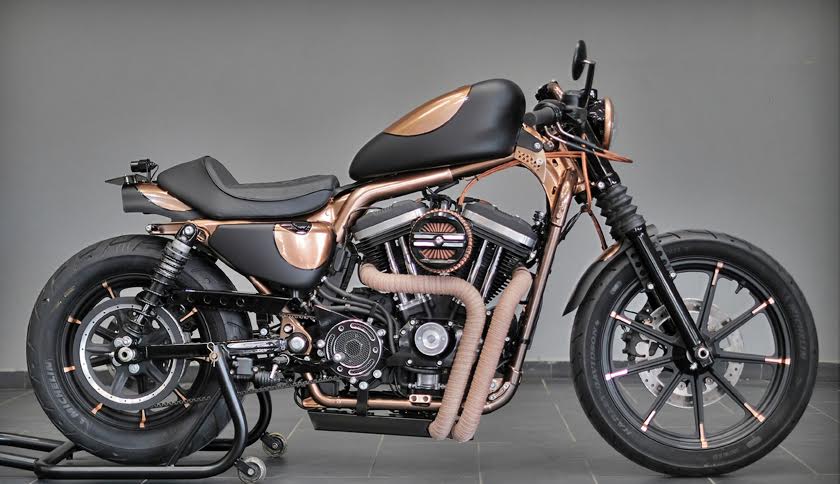