It’s a handsome thing. Is it not?

Why does the British Secret Service agent prefer Aston Martin as the sports car of choice? The bond shared between James Bond and Aston Martin’s cars are well known to the world. It’s been 50 years, and is still going strong while the world celebrates the Spectre, the latest movie from the James Bond series. The all-new DB10 is officially provided by Aston Martin for the movie exclusively, and here in Dubai, we had a press event held this week.

Have you ever thought yourself as James Bond? I did. I lived the Bond life for 3 days in Dubai. I think I should consider myself lucky, because I am the first journalist in the UAE to drive the latest, 2016 Aston Martin Vantage N430. There is no wonder that the Aston Martin’s cars are always a cynosure of all eyes, and the N430 is no exception. The flawless styling of the N430 makes it look exceptionally better. Even though the Aston Martin cars look similar, each car has got its own distinctive characteristic styling which you tend to fathom, if you live with the car. The N430 is available in Coupe and Roadster form. The colour scheme is N430-specific; there are five variations, all inspired by the GT4 race cars with contrasting highlights for the grille surround (or the lipstick, as they call it), the mirror caps, rear diffuser and the roofline of the Coupe (you can get a Roadster version too). This car is in the Stealth livery of jet black and grey, with the highlights painted, not just stickers, and the finish is superb. 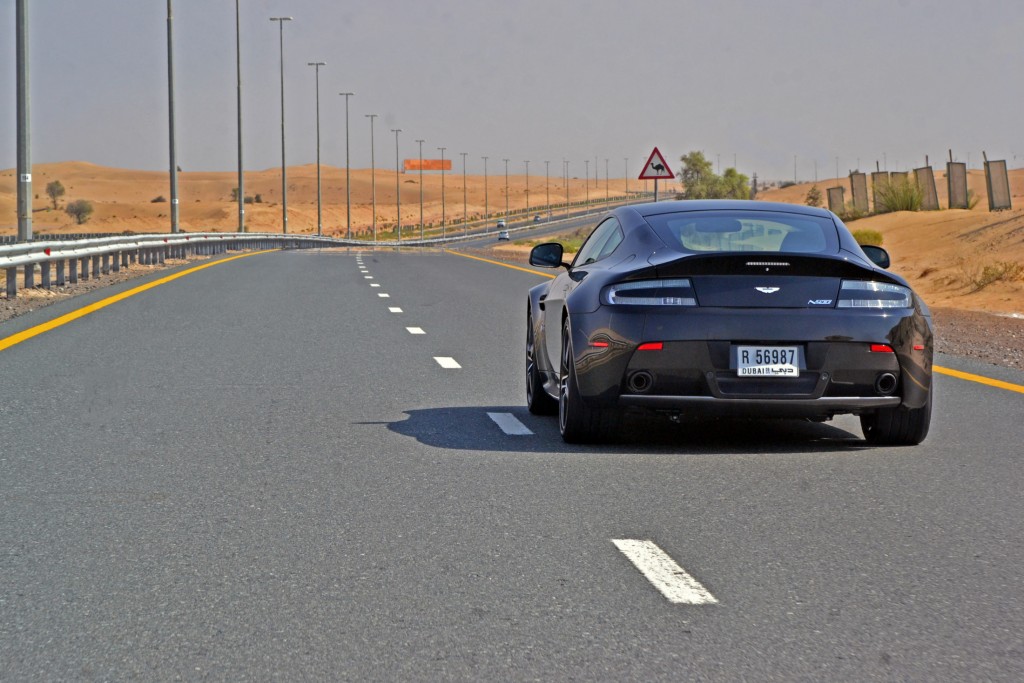 The N430 was initially launched in 2014, the year in which Aston Martin Racing celebrated its 10th anniversary, which has its base at the famous Nordschleife circuit. The ‘N’ stands for Nurburgring, and the 430 for the power output. The Aston Martin Vantage N430 signifies the next top-level version of the V8-powered coupe and Volante, taking over from the N420 and before that, N400 series of Nurburgring-inspired models.

This is my first Aston Martin experience, and it was a pretty special to say the least. And a bit tricky too. To start the mighty V8, you have to insert the glass key into the dash. We are welcomed with a nice V8 rumble. Before I move on to the driving part, let me tell you about the interiors. I felt the interiors are a bit old-school; there is a fair bit of technology lacking in here. The Being racer inspired, the N430 comes with weight saving seats underpinned by carbon fibre and Kevlar frames, still with electric adjustment of course; this is a gentleman’s race car after all. And the 10-spoke wheels are forged items. Other racer touches in the cabin include the alcantara trim and carbon fibre accents. The interior still manages to look special, but even the basics like a reverse camera, sat nav, and Bluetooth remain optional while the functionality is not all that flashy. 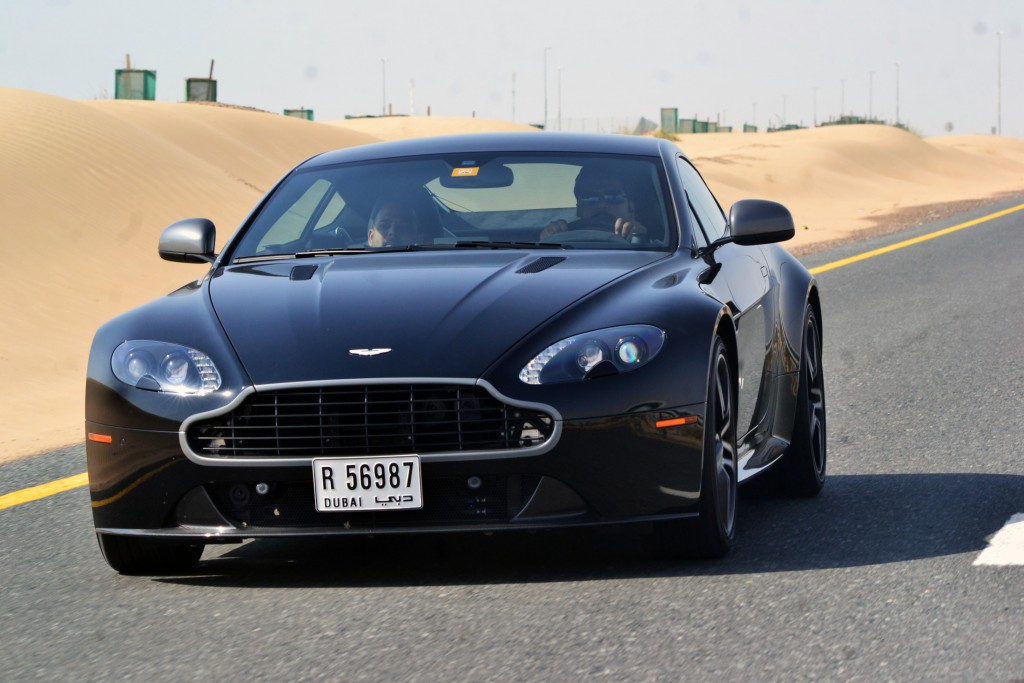 On the road, the Vantage N430 is a treat. From the delicious warble at idle, the Vantage opens its lungs at around 3000rpm, then all the way to the 7500rpm rev limiter, with a metallic rasp that has your right foot subconsciously staying flat a little longer, and you’ll hang on to lower gears from more noise, too, as it’s so encompassing. The response off the mark in the ‘Sport’ setting is solid, but not earth-shattering: 0-100kmph takes 4.8sec, and it continues pulling all the way to its 305kmph top speed. It would be quicker if it launched harder, but it’s quick enough, without being worryingly so on road. There are two gearbox options: a six-speed manual, which is said to have a heavy clutch, and the seven-speed automated manual transmission. That the Vantage’s form still looks striking, the classic phallus on wheels, the sportscar shape, and that the drive stirs the soul, makes it easier to excuse many of the Vantage’s shortcomings against more contemporary rivals. 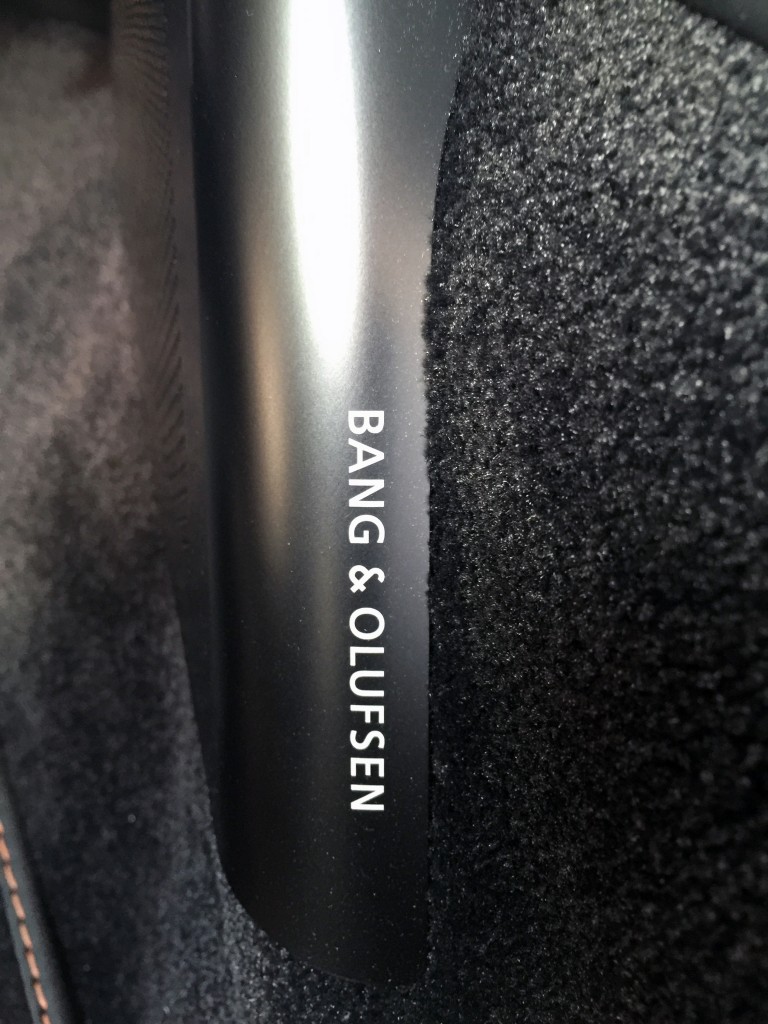 Bang & Olufsen Sound System is a treat for music lovers

As for the gearbox, it’s always best to use the shift paddles, lifting briefly to smooth out the changes. The auto function just doesn’t cut it. The gearbox does reasonably well in traffic, and doesn’t feel overly laboured, and there’s a useful hill hold function too. But a modern twin-clutch gearbox is the way to go – both, in terms of the auto mode and shift speeds at full pelt. 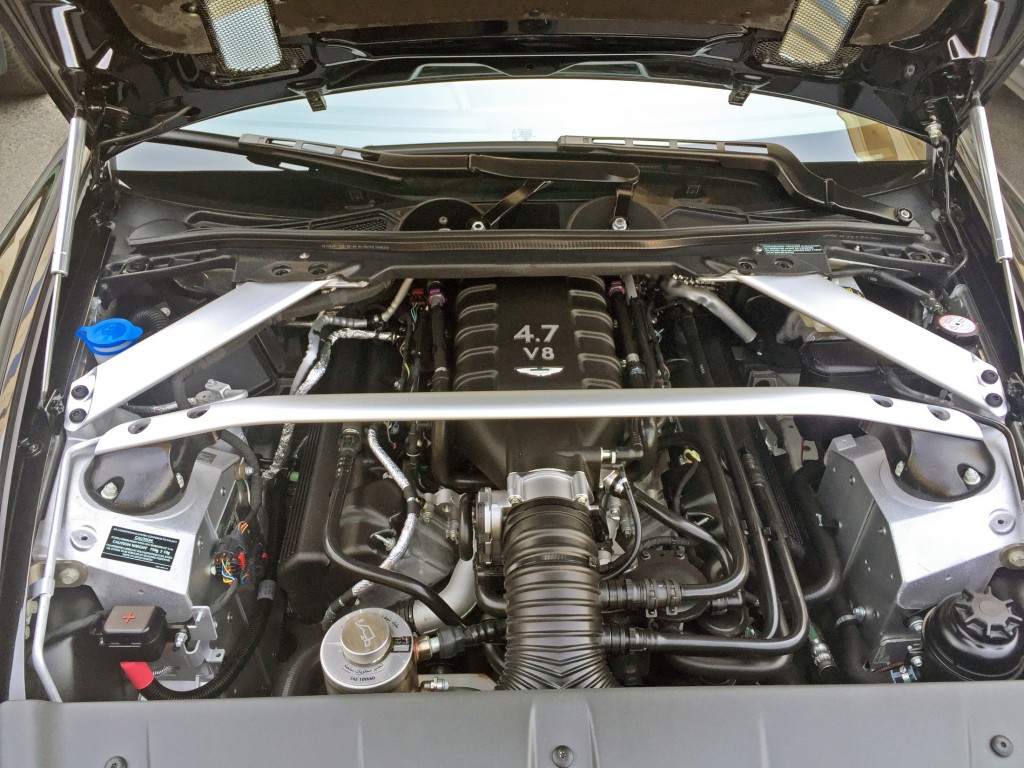 It’s been a while since I’ve driven a car with this much feel filtering through to the hands. The brakes are up to spec too, with a sensitive pedal and lots of power. There’s still a certain amount of cool associated with the Vantage too, like the way the doors open out and up, even the design of both the exterior and interior door handles, and the old world charm of the flyaway handbrake.

With a well-shaped boot, it’s a usable two seater, and comfortable too as a cruiser, although some road roar on coarse chip permeates the cabin, but it’s something all low-riding, big-tyred sportsters suffer. And using the full extent of the V8’s rev range will see it drink petrol limitlessly. 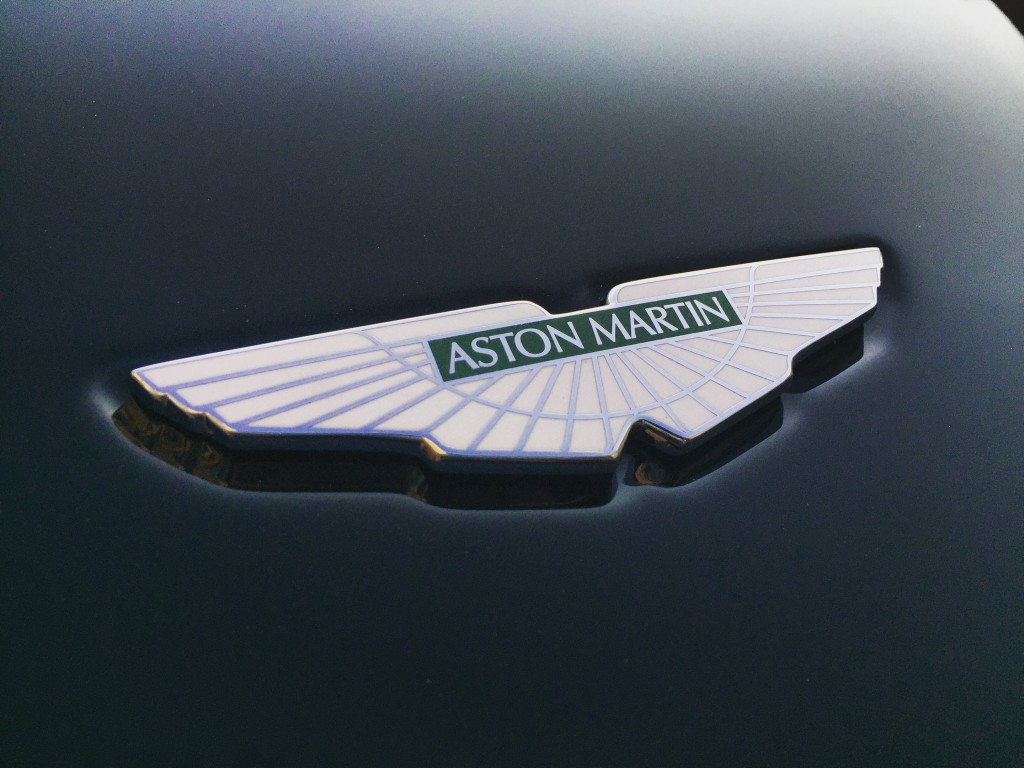 This model is not limited to 400 coupes and 400 Roadsters like the previous N models. That’s good – because if you want one, you can have one – but that means it’s not so exclusive. That apart, we all know that the Vantage has been on sale since 2005, and that every Aston is showing its age – and a lack of cash investment – in the cabin’s equipment levels. It’s also exquisitely thirsty. A tank larger than 80-litres would help. 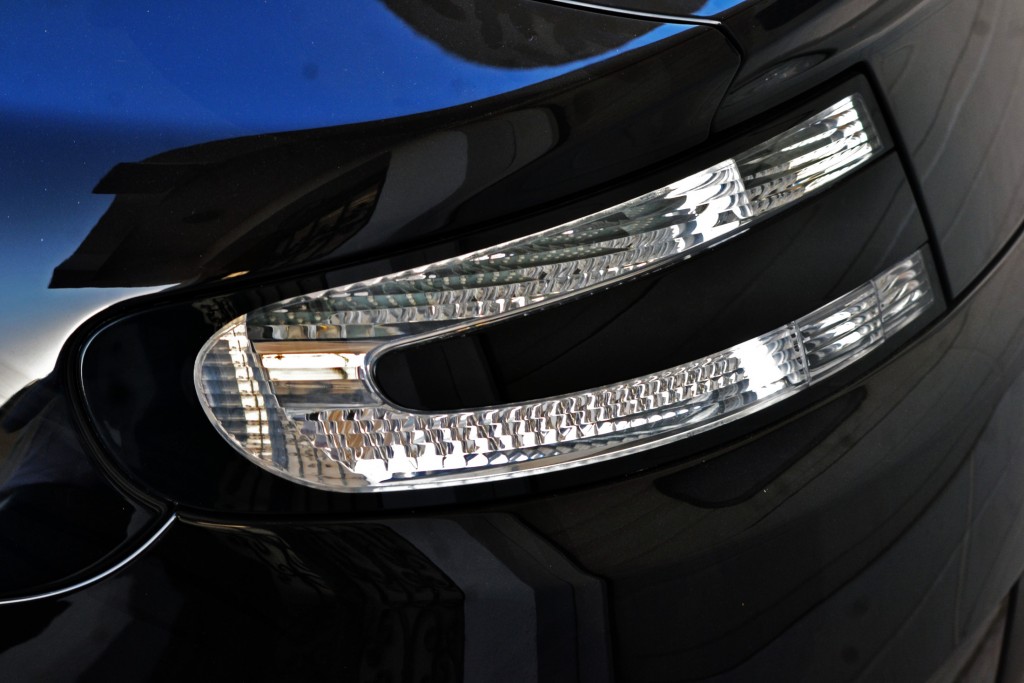 Overall, the N430 is pure Aston. It’s oodles of fun to drive on a winding road. As they say, straight roads are for fast cars and turns are for heavy-footed drivers. When a heavy-footed driver and a fast car like the Vantage N430 become one, it’s the best drive you will ever have. 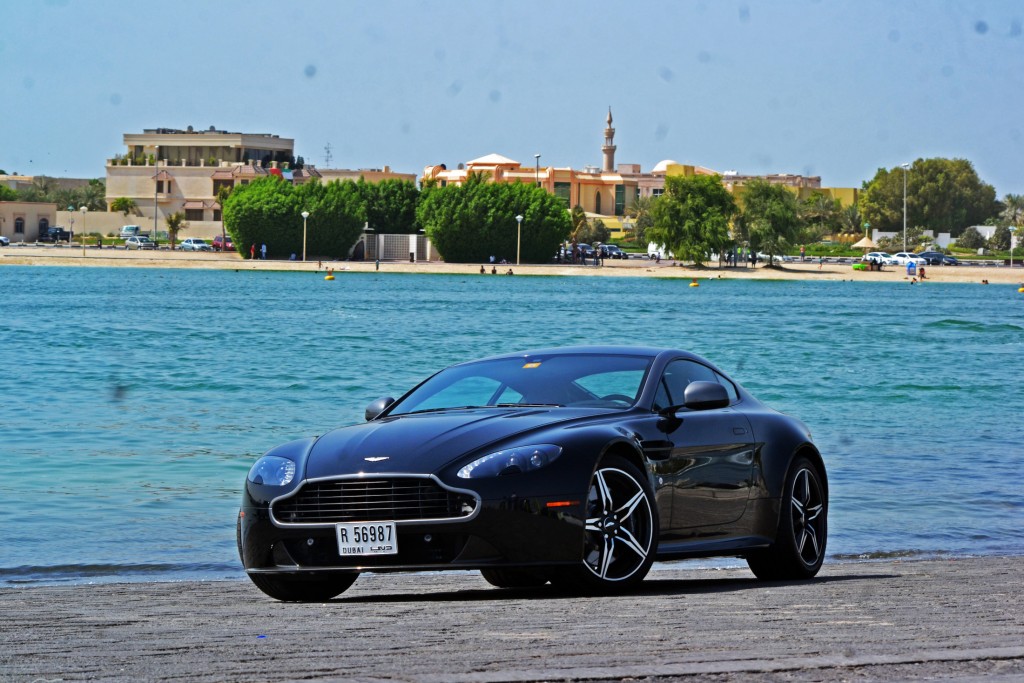