The Spyder adopts the next-generation vehicle dynamic control and aerodynamics developed for the coupé, with the 5.2-litre naturally-aspirated Lamborghini V10 engine uprated for a higher power output and incorporating Titanium intake valves. 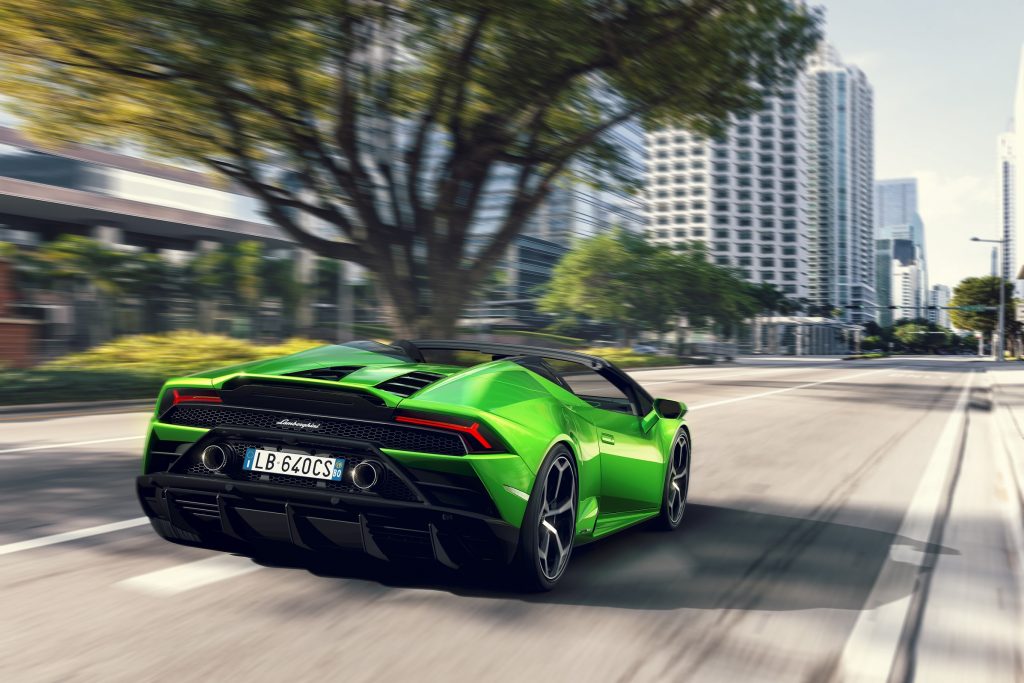 The Huracán EVO Spyder combines the option of open-air driving with the prowess of the Huracán EVO’s evolutionary technologies. Rear-wheel steering and a four-wheel torque vectoring system are controlled centrally by Lamborghini Dinamica Veicolo Integrata (LDVI): the Central Processing Unit integrating and controlling every aspect of the car’s set-up and dynamic behaviour, anticipating the next move and needs of the driver and interpreting this through a ‘feed forward logic’.

Processing data in real time, the LDVI system monitors and analyses external conditions through its active suspension and all-wheel drive. It also recognizes the driver’s intentions through steering wheel, braking, acceleration, the gear and driving mode selected. Precise inputs are given to the vehicle dynamic system, creating a super-agile and responsive car with unparalleled level of control: the car doesn’t just react, but predicts the best driving set-up for the next moment.

Lamborghini Piattaforma Inerziale (LPI) version 2.0, launched on the EVO coupé, is a comprehensive set of accelerators and gyroscope sensors located in the car’s centre of gravity, monitoring real-time lateral, longitudinal and vertical accelerations, as well as roll, pitch and yaw rate. The magneto rheological suspension, also upgraded to version 2.0, instantaneously adapts the damping following inputs from the LPI. The new advanced traction control system together with enhanced all-wheel drive and torque vectoring, allows traction to be directed to a single wheel as required. Modified Lamborghini Dynamic Steering (LDS), provides higher responsiveness in corners while requiring the lowest steering angles. Coupled with rear-wheel steering, agility is ensured at low speed with maximum stability in high-speed cornering and under severe braking.

Driving the Huracán EVO Spyder is as refined or exciting as the occupant’s desire. The preferred driving mode is selected via the ANIMA system, with STRADA especially calibrated via the LDVI system for road-driving comfort. In SPORT it adopts a fun and exciting persona, with the ability to drift. In CORSA the Huracán EVO Spyder demonstrates its Performante heritage:  race-track ready and exhilarating, for the most extreme driving environments. 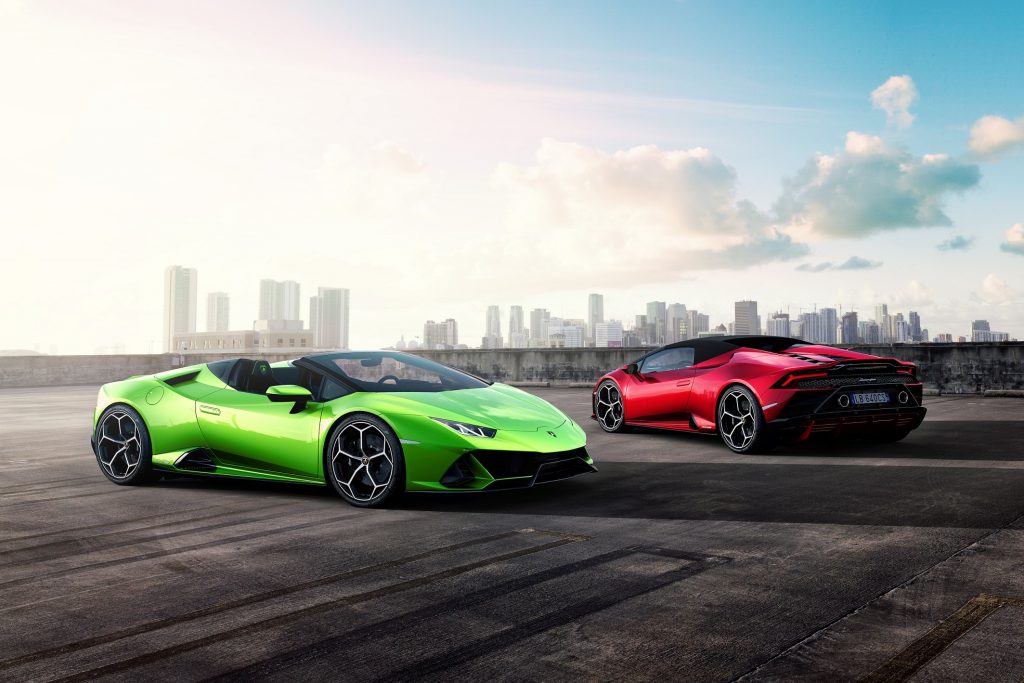 Open-air aerodynamics and design – inside and out

The aerodynamic superiority of the Huracán EVO is continued with the Spyder. With roof either up or down, the aerodynamic competency of the EVO Spyder, with more than five times the downforce and efficiency of the original Huracán Spyder, sustains not only the most dynamic handling and performance but the comfort of the occupants. Cabin airflow is minimised and the occupants assured a quiet cockpit environment.

Like the EVO coupé, a new front bumper gives the car a low, assertive personality with aerodynamic efficiency improved via the front splitter and enlarged air intakes. At the rear the Huracán EVO Spyder adopts the new rear design evocative of naked race bikes and inspired by Lamborghini Huracán race cars, with the twin outlets of the new sports exhaust system positioned high in the rear bumper. At the upper end of the tail an integrated, slotted spoiler provides enhanced air flow, clearly emphasizing the car’s aerodynamic abilities. The underbody has been shaped to maximize aerodynamic efficiency.

The side profile of the Huracán EVO Spyder differs significantly from the coupé, but is equally dynamic with roof up or down. The lightweight soft top carves the top line of the Spyder’s silhouette while up, and is hidden away when down in the most efficient space possible, revealing the athletic and equally powerful lines of the open car. Automatic pop-up safety bars are hidden away.

Whether the roof is up or down, the driver can electronically open the rear window, which functions as a windshield when closed and when open, amplifies the song of the EVO Spyder’s unique aspirated engine sound.

The electrohydraulic, lightweight soft top opens via a button positioned on the central tunnel in just 17 seconds up to a driving speed of 50 km/h (31 mph). As the roof silently lowers, two fins in the same colour as the body rise upwards out of the folding roof casing towards the seatbacks and once in place continue the line to the rear, enhancing the car’s low, dynamic appearance. An integrated duct between the fins reduces turbulence in the headroom during open top driving.

The Huracán EVO Spyder is presented in Verde Selvans: an iconic new Lamborghini four-layer green, and one of an enhanced range of colours and trims available for the Huracán EVO coupé and Spyder. Interior options include new EVO trim in Alcantara and leather mix, with stitching and trim details to match the body tone. A number of style packages are offered as well as lightweight materials such as Carbon Forged Composite and Lamborghini’s patented Carbon Skin. Lamborghini’s comprehensive customization program, Ad Personam, allows virtually limitless personalization of the new car.  The EVO Spyder sports the new 20” Aesir rims, with Pirelli P Zero tires.

The new 8.4” HMI touchscreen, located in the centre console just above the start button, puts connectivity at the driver’s fingertips, with multi-finger gesture control. Governing car functions including seats, climate and the status of the LDVI system in real-time it also puts all infotainment, such as Apple CarPlay with smartphone integration, at the cabin occupants’ disposal. A multimedia system incorporates connected navigation and entertainment including web radio and video player, with the intuitive interface enabling voice commands. 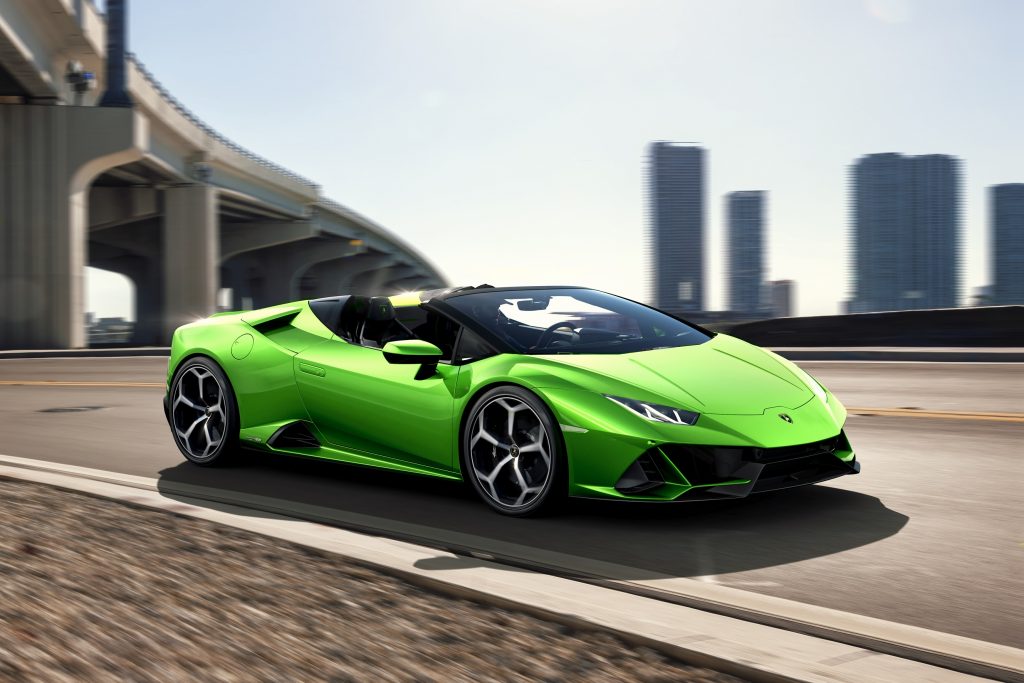