6 things about the Jeep Compass

1) Jeep is one among the biggest stalwarts as far as manufacturing off-road vehicles is concerned. It dates back to 1945, when it started as Willys CJ. The company built jeeps for World War ll. These vehicles proved their salt with solid front and rear axles bolted on to an even more rigid frame that is today an iconic shape among off-road buffs. The Jeep brand is now owned by the Fiat Chrysler Automobiles group.

2) The new Compass – India’s first locally manufactured Jeep – is finally set to make waves, given its brand image and of course, its baby Grand Cherokee appeal. The signature seven-slat grille, projector headlamps and the squared-off wheel arches really give it a stance that’s sure to have prospective buyers fall head over heals. It is based on the same platform as the Renegade, Jeep’s entry-level SUV offering – but for better cabin room, the Compass’ wheelbase has been stretched a bit. Most of the enthusiasts are going to buy it just for the way it looks! 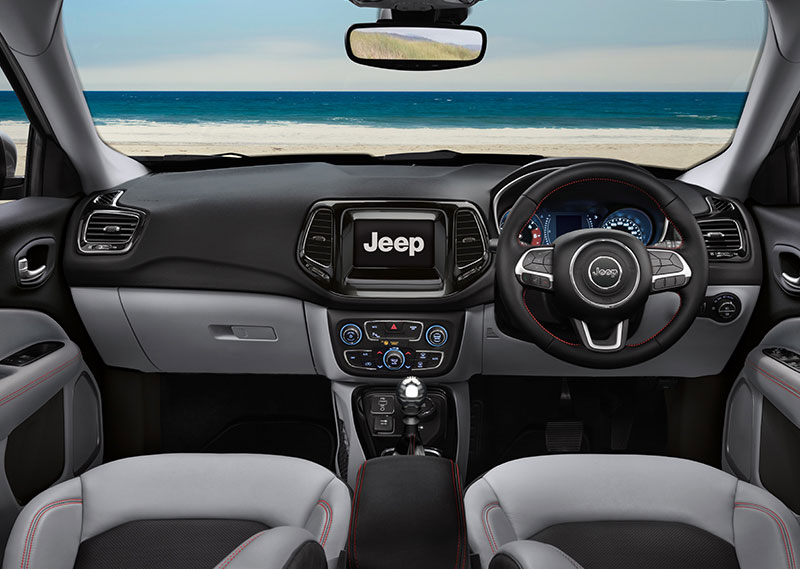 3) The cabin is so premium, it feels like it can take on some bigger, more premium SUVs. Leather seats, a chunky steering wheel, a 5.0-inch or 7.0-inch touchscreen infotainment system, a Terrain Select dial, Jeep’s Selec-Terrain Traction Management system, and what not!

4) Going off the road is what most won’t do, but the Compass will not cease to flatter if and when you feel the need to play in the slush. With its dedicated four-wheel-drive system, it will traverse through all kinds of terrain, typically living up to its DNA. The base variants, however, will come as front-wheel-drive only. The four-wheel-drive ‘Limited’ variants will also come equipped with a locking differential. We can bet that, although the rivalling Tiguan and Tucson are good SUVs, the Compass simply outshines them off the beaten track.

5) An all-new Fiat-made 2.0-litre, four-cylinder Multijet ll mill powers the Compass, and makes 174hp. There is also a petrol motor on offer: a 1.4-litre, MultiAir turbo that makes 164hp. The former is solely available with a 6-speed manual transmission, while the latter will come linked to a 7-speed dual-clutch auto gearbox and a 6-speed manual. We’d also recommend waiting for the 9-speed auto diesel, that is scheduled for an early 2018 launch.

6) The Compass is being produced and exported from Fiat’s Ranjangaon plant. Being a product that is sent overseas, expect an Indian Compass that is at par with international-standard models of the same.